Vettel Wins For A Fifth Time Under The Lights Of Singapore 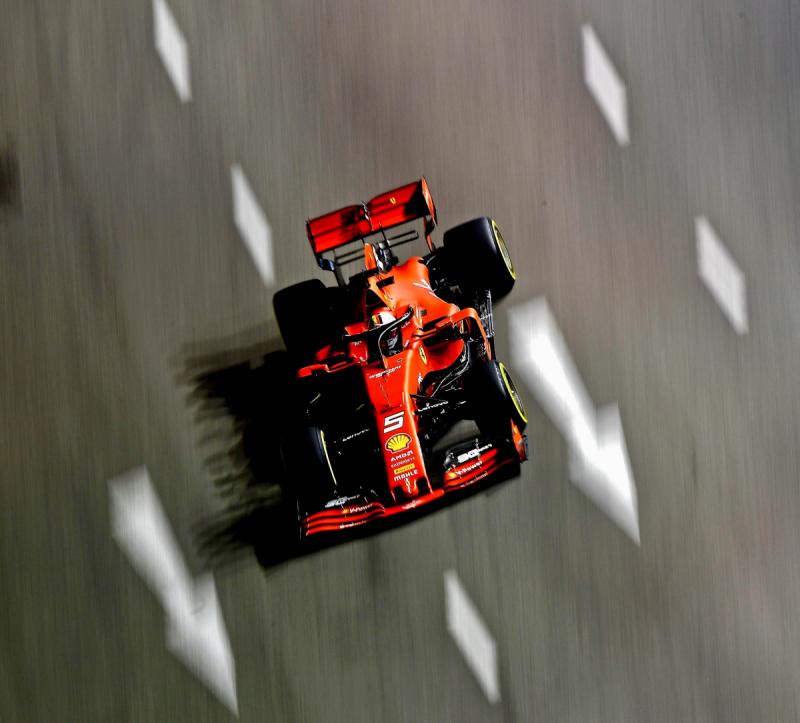 Sebastian Vettel returned to winning ways as Ferrari claimed an unexpected 1-2 finish
A fortnight after the controversial Italian Grand Prix weekend which resulted in so many talking points as well as a second victory in a row for Ferrari’s young Charles Leclerc, the Formula 1 circus reconvened in hot and humid Singapore and this time his vastly more experienced multiple champion team-mate Sebastian Vettel led the pair home for the first ever 1-2 finish by any team in the history of this race.

A few news stories had featured up and down the F1 paddock on the Thursday before the race weekend, starting with the Haas team arriving in Singapore sporting an amended livery for its cars and drivers’ overalls after dropping all references to its former title sponsor Rich Energy following a fractious dispute. Also, the American outfit confirmed that it will be retaining Romain Grosjean next year after being with the team since its debut back in 2016.

The French-Swiss driver will be partnered by their other current pedaller, Kevin Magnussen, whose contract already includes 2020. This development leaves the experienced German Nico Hülkenberg, who is being released by Renault at the end of this season and who was a strong contender for the Haas seat, still seeking an opportunity to remain on the F1 grid next year.

Elsewhere, both the struggling Williams team and its Polish driver Robert Kubica confirmed that he will be leaving the team at the end of the year to pursue other motorsport opportunities, admitting that his return had been tough after suffering life-threatening rally injuries back in 2011. The news was far from unexpected and Racing Point’s Lawrence Stroll, father of their driver Lance Stroll, was keen to say that Kubica would be their third/reserve driver next year, although competing for Audi in the German touring car championship, the DTM, is also a real possibility. 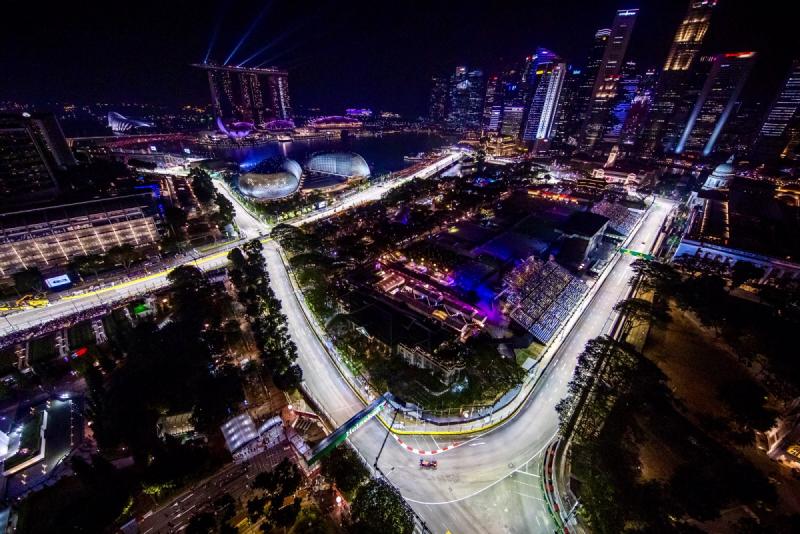 Singapore’s floodlit Grand Prix is truly a sight to behold and very popular with fans
Unfortunately for Hülkenberg the new opening at Williams will probably not be a realistic opportunity for the likeable German as the team will want to receive a large cash injection from their second driver for 2020 and the current reserve pedaller, the well-funded Canadian F2 competitor Nicholas Latifi, is expected to step up. That leaves Hülkenberg as a potential replacement for the low scoring Antonio Giovinazzi at Alfa Romeo, but Ferrari may want the latter retained as one of their junior drivers. Time will tell.

Also, double world champion Fernando Alonso had chosen to leave the McLaren team at the end of last season, but the 38-year-old Spaniard is clearly missing F1 as at the previous two races in Belgium and Italy he and his advisers had been touting his services round the leading teams for next year, if seemingly to no avail with so many highly talented young drivers and Hülkenberg available and seeking employment at motorsport’s top table.

Back to the ontrack action around the streets of sticky Singapore. In Friday’s opening free practice session Red Bull’s Max Verstappen had shown the rest a clean pair of heels, with Vettel his closest challenger. Lewis Hamilton was a further half second adrift in his Mercedes as his team-mate Valtteri Bottas suffered the ignominy of badly damaging his silver charger and causing red flags after losing control at the Turn 19 righthander. Leclerc was slowest bar one after his red flying machine from Maranello suffered a gearbox problem.

A further problem soon came the way of the Mercedes team as it was fined 5,000 Euros for a fuel infringement when it was found to be about to use too cool fuel in Hamilton’s car. The regulation exists as cooling fuel provides a performance advantage. 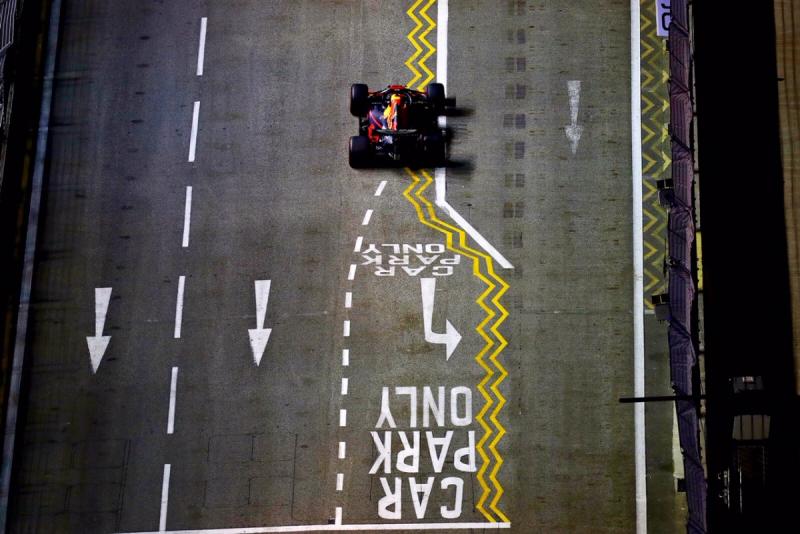 Red Bull’s third placed Max Verstappen remembered to ignore the road markings and instructions!
Hamilton and Verstappen made the day’s second practice period their own, being very closely matched over a single lap, although the Mercedes car looked noticeably faster than the Red Bull during the race simulation runs. The best of the rest honours were earned by Vettel, if a mighty 0.818s off the pace.

Come Saturday’s final practice session, which was briefly interrupted when Sergio Perez hit the wall exiting the final chicane and left parts of his Racing Point car littered across the track, Ferrari sprung a surprise as Leclerc and Vettel sandwiched Hamilton at the top of the timesheets. This development helped to reduce the growing feeling in the paddock that the weekend was going to be all about an out-and-out battle between just Hamilton and Verstappen.

Despite three DRS zones this year, overtaking isn’t easy around the Marina Bay circuit and the polesitter has emerged as the winner in eight of the 11 Grand Prix held in Singapore to date. So Saturday evening’s qualifying session was even more crucial than usual and Leclerc continued his vein of excellent recent form as he claimed the top spot on the grid for the following day’s big event, helped by Ferrari’s new aero package aimed at improving peak downforce at a circuit where they had feared they would be less competitive than Mercedes and Red Bull.


Also by Graham Read...
Flawless Russell Makes It Two Wins In A RowSainz To Ferrari, Ricciardo To Mclaren And Vettel’s FutureVettel To Leave Ferrari At Season EndRussell Holds Off Leclerc To Reign In Spain﻿Albon On Top After An Epic Battle With Leclerc
The Monegasque subsequently admitted he was out of control three times on his pole lap and thought he was going to crash, but how the youngster’s bravery and raw pace again delighted the tifosi, bringing back wonderful memories of the carefree spirit of Ferrari legend Gilles Villeneuve.

Hamilton squeezed all the pace he could out of his flying Mercedes, but had to settle for second place ahead of the other Ferrari driven by Vettel and Verstappen’s Red Bull. With Bottas fifth fastest and Alex Albon putting in a fine effort to be sixth for Red Bull on his first visit to the track, the leading sextet of cars run by the top three teams with the biggest budgets simply exemplified yet again the biggest problem that F1 currently faces - namely that, until proposed regulation changes are introduced with effect from the 2021 season, it is sadly far too easy to predict who the top six cars will be most times they are on track without sufficient competition from the other seven teams.

Controversy and F1 seem to have so often gone hand in hand for most of the sport’s history and so it was post qualifying when Daniel Ricciardo’s Renault was found to have briefly produced a very small amount of electrical energy beyond that allowed via its MGU-K hybrid power unit component. As a result the stewards rather harshly disqualified the Australian and he lost his eighth place on the grid, but was allowed to start from the back.

After all the news stories and action in practice and qualifying the opening period of the Grand Prix was actually something of a disappointment as, following a clean start by the top six on the grid, the leading Leclerc set a very steady pace which was enough to keep him out front whilst protecting his soft specification tyres and controlling everyone else’s race.

Only come lap 16 did Leclerc start to push hard, taking second placed Hamilton along with him. As the pit stop window approached Ferrari decided that they would gamble for a 1-2 finish rather than the probable 1-3 they faced and so made a late call to bring Vettel in first for the planned switch to hard tyres. The undercut worked perfectly for the German as, when Leclerc emerged from the pitlane just a single tour later, he found himself ahead. 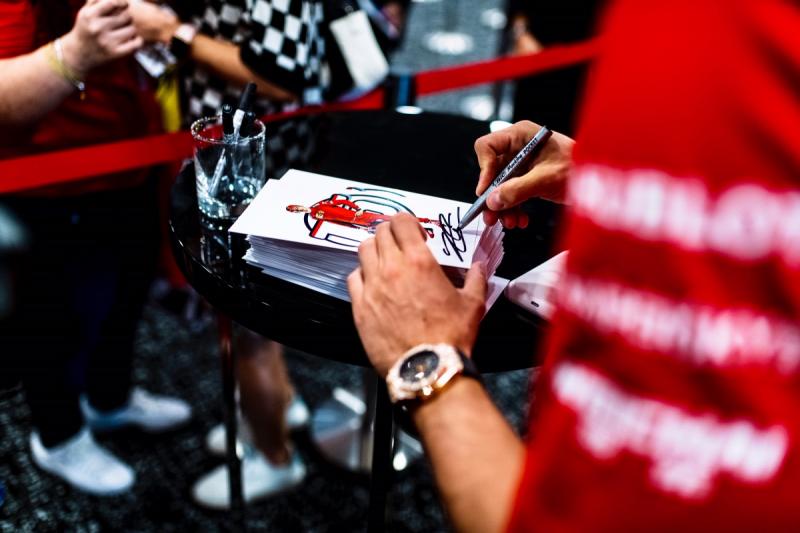 Just a couple of hundred more photos to sign please, Charles!
Verstappen had pitted at the same time as Vettel and then Mercedes brought Bottas in, but a combination of the team and Hamilton himself chose to stay out, now leading the race but yet to stop. Surprisingly his stop didn’t happen until lap 26 when he rejoined in eighth position and a true fourth after allowing for others ahead but who had yet to pit. By this time Vettel was running fourth, but the real leader of the Grand Prix.

Vettel was on a charge as he swept past Ricciardo and Gasly, with only Giovinazzi’s Alfa Romeo ahead of him and actually leading a Grand Prix, if yet to stop. After the main pitstop period was completed we had Vettel out front, followed by Leclerc, Verstappen, Hamilton, Bottas and Albon. Hamilton had benefitted from Mercedes telling Bottas to slow down to ensure the team leader emerged from his pitstop ahead “for the good of the team” and the quiet Finn duly obliged.

We then had a flurry of three consecutive safety cars periods which unfortunately interrupted the flow of the race just as it was getting really spicy. Firstly Haas’ Romain Grosjean clashed with the Williams car of George Russell, leaving the latter stranded against the barriers. Then Perez’s Racing Point machine ground to a halt and needed recovering and lastly Daniil Kvyat and Kimi Räikkönen made contact, with the Finn’s Alfa needing to be removed.

On each occasion the pack backed up, headed by the leading Vettel, and as racing resumed each time the Ferrari driver used all his acquired nous to make excellent restarts and see off the threat posed by his team-mate. The top six remained unchanged to the chequered flag, with young British driver Lando Norris finishing a superb seventh for McLaren as the best of the rest behind the top three teams. Haas’ Kevin Magnussen set the fastest lap of the race with three tours remaining, but there was no additional point for the Danish driver as he was running 17th and last at the time. 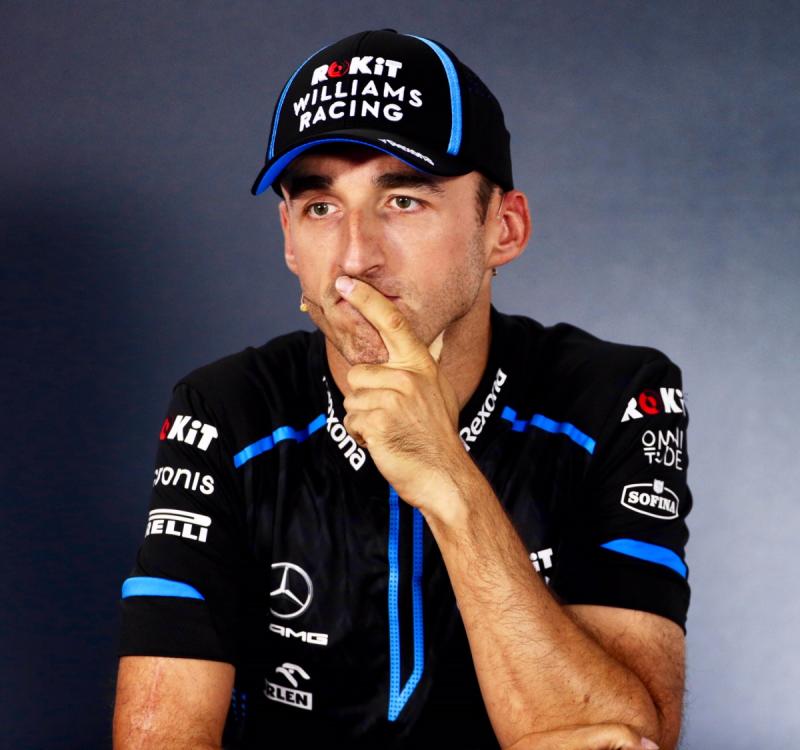 Polish F1 returnee Robert Kubica and his Williams team confirmed in Singapore that they will be parting company at the end of this season
Leclerc wasn’t happy about losing the lead due to Ferrari’s pitstop strategy which was focussed on the best team outcome rather than individual ones, but the Scuderia was delighted to make it three victories in a row and at a circuit where they did not expect to do well. A fact their Mercedes and Red Bull rivals very much took note of, even though it was a case of too little too late for any championship aspirations Ferrari may have had for this season.

As soon as the chequered flag had flown in Singapore, this year’s F1 calendar provided another fine logistical test for all involved as in just five days time the cars will all be back on track, albeit in Sochi on the Black Sea, for the first practice session prior to next weekend’s Russian Grand Prix. The high-octane world of Formula 1 never stands still for long.