Sheffield promoters Buds & Spawn first launched in2019 bringing a series of semi-irregular nights of semi-irregular music to some of the city's great independent venue for lovers of the weird and wonky, punky and proggy, choppy changey, twisty turny, off kilter, psychedelic, experimental, math / alt / art / and the just plain awkward 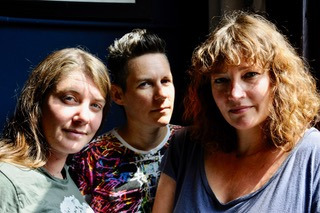 At the start of 2020 plans were put in place for a programme of gigs funded by the Arts Council 'Supporting Grassroots Live Music' initiative. These were planned to take place across the year but then the pandemic took hold and the UK went into lockdown.

Now Buds & Spawn have announced, in place of the events, a series of live stream shows across this year and in to 2021. Each one will be a combination of exclusive new music and pre-recorded sessions from each headliner and a local act, along with live interviews, chat and an interactive Q&A. Additionally the aim is to also raise some money for the venues that should have been hosting the original gigs.

"They’re going to need all the help they can get to weather this storm", Buds & Spawn founder Laura Holmes comments, while adding:

"I was in the midst of planning the launch event for this exciting programme of Arts Council funded gigs when the pandemic took hold and the UK went into lockdown. Initially I thought I’d just be able to delay the gigs for a couple of months, but it gradually dawned on me that the reality would be much more complicated.

"I hated the thought of continually delaying the gigs and sitting on this funding for months when the artists, crew and venues needed the income more than ever. But I also hated the thought of trying to promote events and persuade people to come out and spend time in a small room with lots of other people if it wasn’t completely safe.

"I was really struggling for time with my three kids now at home full time, so I roped in some help (Project Manager, H Nicol) and started talking to everyone involved about reshaping the programme and delivering some of it online.

There was a great response from the headline acts - most of them were just really keen to continue to get their music out there and excited about the prospect of creating some new and original digital performance for us.

"We took the decision early on that all the music content should be pre-recorded and high quality, as our experiences with live streamed music was patchy. For some of the local bands that would have been our support acts, we’ll be hosting a (socially distanced) live session recording day, using the top notch technical team that would have been working on the live gigs and hosted by one of the partner venues, Theatre Deli."


Also by Graham Clark...
Turtle Bay, A Nice Time In YorkGet Closer To Nature This Half Term At Blackpool ZooWestlife To Play Their Only Show In The NorthPrezzo 2 Course Menu - Yours For A Tenner!The Cookie Jar - Northumberland’s Smart Cookie
The first live stream show to be announced for 22nd October will feature avant-garde, progressive, lo-fi, sound project VÄLVĒ, which originally started out as the outlet for composer/performer Chlöe Herington’s (Chrome Hoof, Knifeworld) compositional work using text and image as the starting point for scores. She collects sounds and diagrams, composing predominantly for bassoon, saxes, electronics and found sounds to explore synaesthetic memory and collective experience.

They will be supported by Sheffield’s Persona aka Raquel Vogl and Claire Williams, a ‘duo of guitar and voice with songs from the attic’. Raquel Vogl comes from Washington, DC/New York, where she was a dedicated participant of the long-standing experimental punk music communities there, playing in bands such as The Crainium, Legends, and Meltdown. Claire Williams (aka Myrtle) sang in the Canyon Family and Former Lover (with Dorian Cox of the Long Blondes). They are also one half of Sheffield ghost-pop/post-ghost punk band People Here.
https://peoplehere.bandcamp.com

The remaining 3 Buds & Spawn shows will take place on 10th December, 25th February and 10th April with artists being announced over the coming months.