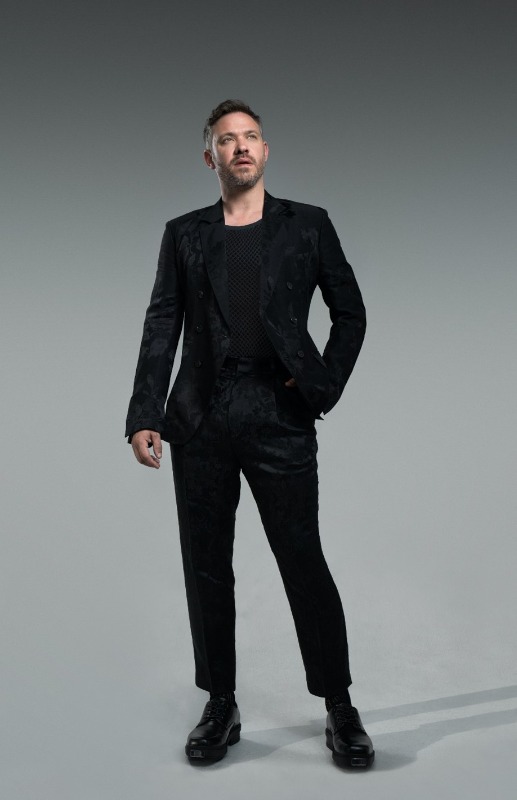 Will Young colour portrait © Joseph Sinclair 2021
Though it may impossible to believe, it is nearly 20 years since Will Young stood up Simon Cowell on pop Idol and earned himself a place in the hearts of millions. Always seen as something of an under dog, there is no chance anyone could have ever really seen the talented songsmith as anything near average. Having grown as an artist with each every release, he celebrates his back catalogue next year with a retrospective collection and a celebratory tour.

We caught up with Will to see he has planned.

How are you and what has been keeping you busy in recent weeks?

I’m very well thanks. I just managed to have a lovely two week break in Greece. I studied ancient history and was completely excited and overwhelmed at finally being able to visit the Acropolis, the birthplace of democracy. Also my new single Indestructible was released, the third track from my most recent album Crying On The Bathroom Floor’ and I’ve been so pleased with the response.

You have just announced a brand new ’20 Years Tour,’ celebrating the 20th anniversary of your winning Pop Idol, which will see you playing 22 UK towns and cities in autumn 2022 – can you believe two whole decades have passed so quickly?

I love the phrase 'time flies when you’re having fun' and the last 20 years have been more fun than I could ever have imagined. I’ll never forget how people took the time to pick up the phone and vote for me - it’s kept me humble and grateful ever since.

On reflection, do you think being the first ever Pop Idol winner back in 2002 was the biggest ‘sliding doors’ moment of your life? Do you think you might quite possibly have succeeded as a pop star without taking that plunge and auditioning for the show?

I don’t think I would’ve become a pop star at that time without Pop Idol because I don’t think anyone would’ve signed me, an openly gay politics student. That's what was so beautiful about the show.

Can you think back to how it felt to receive such a mountain of votes from the British public?

It was such a new experience; not just for me, but also for everyone involved in the TV show. No one knew it was going to become such a huge success, to the point where it was even debated in parliament! The whole thing was a rollercoaster of fun and laughs and it felt very validating to be voted for by so many people.

Do you know yet what fans can expect from these newly-announced 20th Anniversary live shows in autumn 2022?

Yes, I am going to be playing most of my singles from over the last 20 years, possibly in chronological order! I’m also going to have a request section where me and my pianist would have learnt every single one of my songs - including all the B-sides!

You dipped your toe back in the water recently with a handful of intimate ‘a night with’ type live shows – how did it feel to be finally back onstage in front of a live audience?

Surprisingly, I didn’t feel like I had been away for that long. I thought I might be more nervous because it had been such a long time due to COVID, however my muscle memory of gigging kicked-in and I absolutely loved interacting with the audience, singing so many of my songs with just a piano. It was a beautiful experience.

Your recent eighth studio album ‘Crying On The Bathroom Floor’ was really well-received – will you be playing any of those songs on the new tour, along with all your other hits?

I will definitely be playing the singles from the latest album. I have been so thrilled with how well the whole record has been received. Sometimes things just fall into place and, with the combination of great production plus brilliant artists and songs, it worked out really well. I’m very proud of it.

You cover and shine a spotlight on some your favourite, more leftfield modern female pop artists on the latest record. I read that you wrote to each of those women and explained why you chose to record their songs and that many of them replied to you – what was the loveliest response you received?

Will’s latest album Crying On The Bathroom Floor is in shops now - he will also release a new career-spanning album 20 Years – The Greatest Hits next year.

All of the responses were lovely, but I was particularly moved by Clare Maguire’s response. Her single ‘Elizabeth Taylor’ is such a special song and she’s such a kind person. I was so pleased that she was really thrilled with my version.

Your new single is a remix of your version of Swedish pop artist Robyn’s ‘Indestructible’ – what was it that attracted you to that song (and Robyn in general)?

Robyn was very much an artist I wanted to cover - she’s so well respected as a pop artist and songwriter. I felt like ‘Indestructible’ was the song of hers that I could do a good original-sounding version of.

It’s well documented that your dogs and gardening are amongst your great passions in life (you’ve even appeared on BBC TV’s Gardeners’ World on a few occasions) – did those things help you during the lockdowns these past 18 months?

Animals are a huge passion of mine - having rescue dogs to look after with all their various operations and rehabilitation definitely kept me focused. One of my concerns I’m exploring at the moment is how dogs like beagles are tested on in laboratories when they don’t need to be. If I can shine a light on animal cruelty then I will. When it comes to gardening, I absolutely love it and get so much satisfaction out of it. I LOVED appearing on Gardeners’ World - it’s one of my favourite TV shows.

Acting also seems to be a passion of yours (you were even nominated for a Laurence Olivier Award for your role in the revival of Cabaret on-stage in London a few years ago) – do you have any plans to act again in the near future?

I’m very excited as I’ve just signed up with a new brilliant acting agent and I already have some plans in place for next year - more news coming soon!


Will Young celebrates the 20th Anniversary of his winning ITV’s first ever Pop Idol with a newly-announced 20 Years Tour, which takes in 22 UK towns & cities in autumn 2022 – tickets on-sale now via
aegp.uk/WYUK