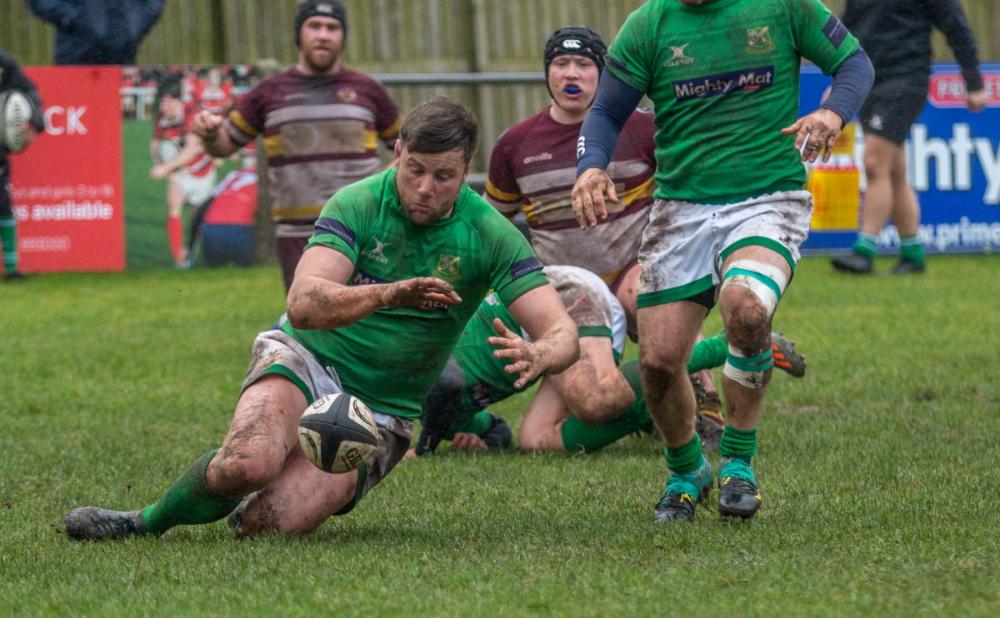 photo by Ro Burridge
A tense affair at the Avenue was won by the home side with a try late in the first half.

Huddersfield had defended stoutly for 40 minutes, and with Wharfedale reduced to 14 men, thought they had seen the half out with only a penalty against them.

The strong wind was a major factor and Huddersfield could not get out of their half, but their resolute defence kept Dale out. They also kept the ball for long periods going through phase after phase to get to half time.

Dale soon set up camp in Field’s 22. A penalty gave Blakeney-Edwards the chance to set up an attacking 5 metre line-out.

A messy line-out was won but Dale could not breach the defence. Dale were finding it hard to cope with the wind at the line-out, and this was denying them good possession when in attacking positions.

The wind was producing problems for both sides, as well as causing the shed to huddle together like Emperor Penguins on Antarctica. 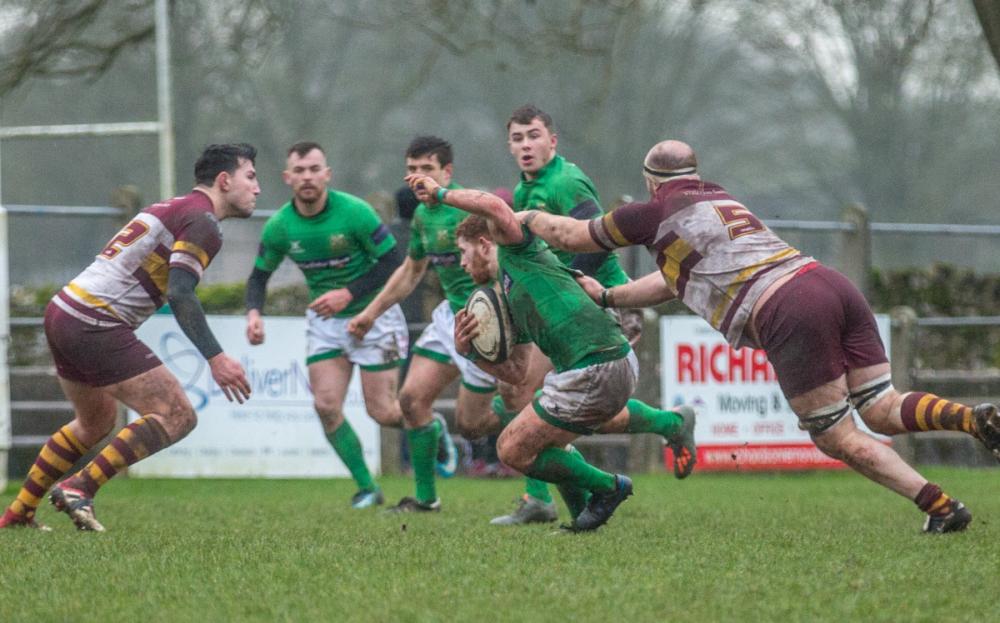 photo by Ro Burridge
Wharfedale’s best attack in the first half came from a tapped penalty – a much more secure option in the conditions. The forwards set up good ruck ball and Sam Gaudie broke through to get close. Five phases later Huddersfield had relief with a penalty.

Huddersfield pushed play away from their line but Jack Blakeney-Edwards put Dale on the scoreboard after 30 minutes.

The visitors were looking to survive with only three points against them and they were given a boost when Dale’s skipper, George Hedgley, was sin binned for a low no arms tackle with 5 minutes left before the interval.

Huddersfield still could not get out of their half and soon were pushed back into their 22 with a Blakeney-Edwards kick and good chase by Oscar Canny.

The Wharfedale forwards patience eventually paid off and they scored with the last play of the 1st half, Matt Speres, being awarded the try. Jack Blakeney-Edwards added the extras to give Dale a 10 – 0 lead. 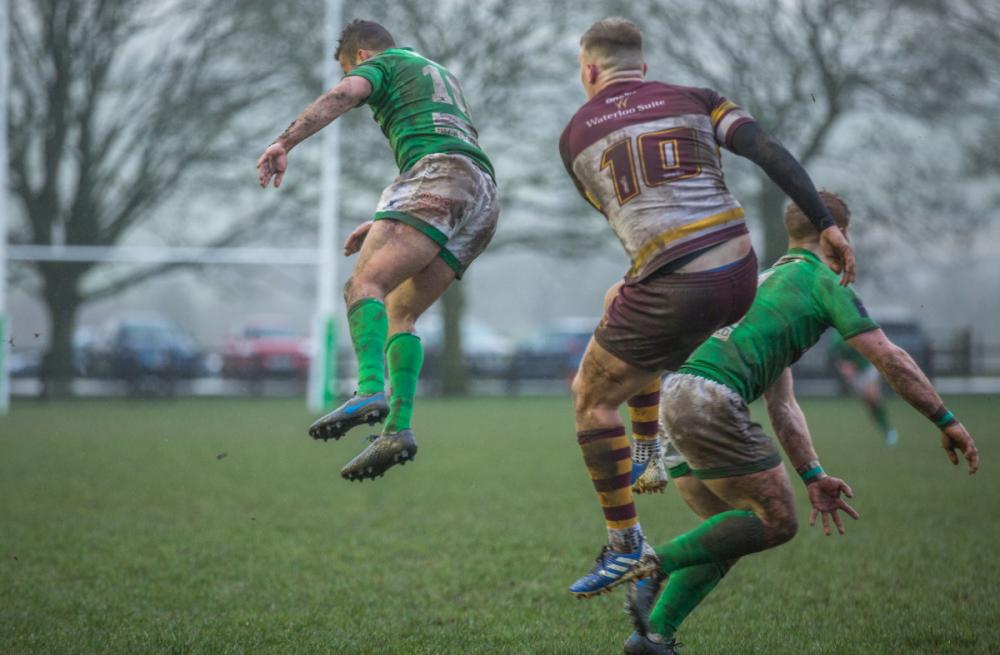 photo by Ro Burridge
The second half saw Huddersfield with a territorial advantage but they did not get any meaningful possession in the home side’s 22. Wharfedale did manage what Huddersfield could not do in the first half, and made inroads on more than one occasion into the visitor’s 22.

Dale showed how to gain territory by not kicking high but employing a grubber kick and then putting pressure on the Huddersfield back three with a good follow up.

The visitors did get into Dale’s 22 when some loose play by the Greens saw the ball hacked into the try area and force Rian Hamilton to touch down for a 22 drop out. The best move of the half came from Wharfedale.

A clever move at the front of the line out to Josh Burridge saw him then feed Gaudie. A weighted grubber kick from Gaudie was followed up by the Greens, but somehow the ball was scrambled away by Huddersfield for a Dale attacking line-out. The wind beat Dale at the line out and the scoring chance evaporated.

Huddersfield had to settle for a penalty kick from Will Milner that gave them a valuable losing bonus point. On the day Dale probably just earned the victory but both sides earned the respect of the spectators for their defences when playing into the wind. 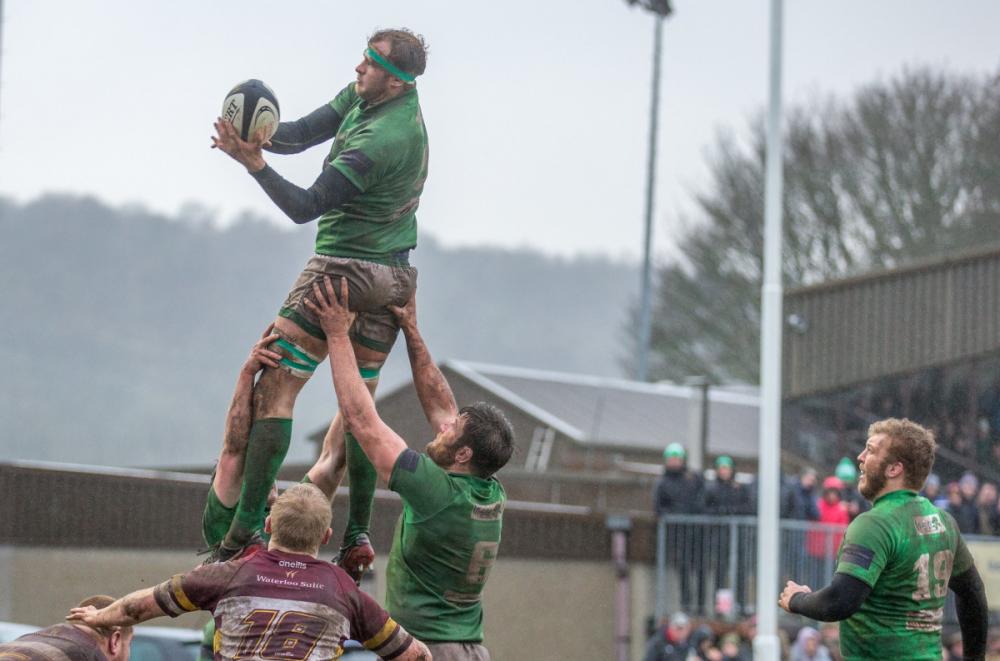 photo by Ro Burridge
This was again an awesome performance from the Green Machine. It was a good old-fashioned fight to the finish and Dale proved to be fitter, and also to be able to play the conditions better.

The pack were magnificent; soaking up pressure and then forcing errors. All players tackled in the true fashion of the green shirt and the line held time after time.

Head coach, Jon Feeley, commented:
“In very difficult conditions, I was really pleased with the discipline and skill we showed to control the game. Such a strong wind was a leveller and restricted our movement. But by dominating territory so well, especially in the second half, we didn’t give Huddersfield any opportunities. King Burridge was particularly impressive with his link play and carrying, and losing him to a head shot is very disappointing. But he is a strong character who has come back from adversity before and will reign again”.