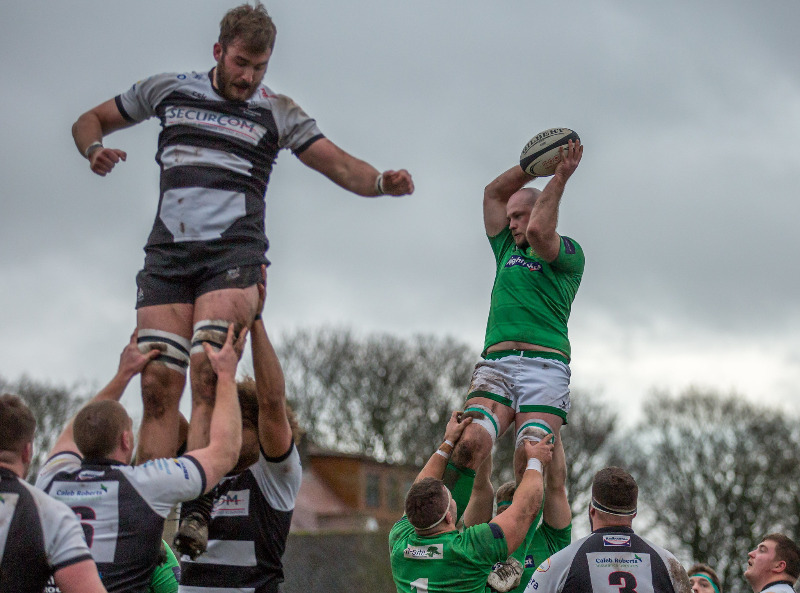 photo by Ro Burridge
Luctonians travelled to a cold and damp North Yorkshire and struggled to find the form they have shown in recent weeks. Wharfedale on the other hand played strong rugby throughout and deserved to reap the rewards of four points.

The opening 15 minutes saw Wharfedale mostly in the opposition half but they could not reach the try line. Oli Cicognini was posing a threat and Ben Blackwell’s burst into the visitor’s 22 was only ended when his speculative offload fell to a Luctonian defender.

Matt Speres was Yellow Carded after 14 minutes when he charged into a ruck without using his arms. Dale were not too troubled by playing one man short and still made good use of possession and territory. 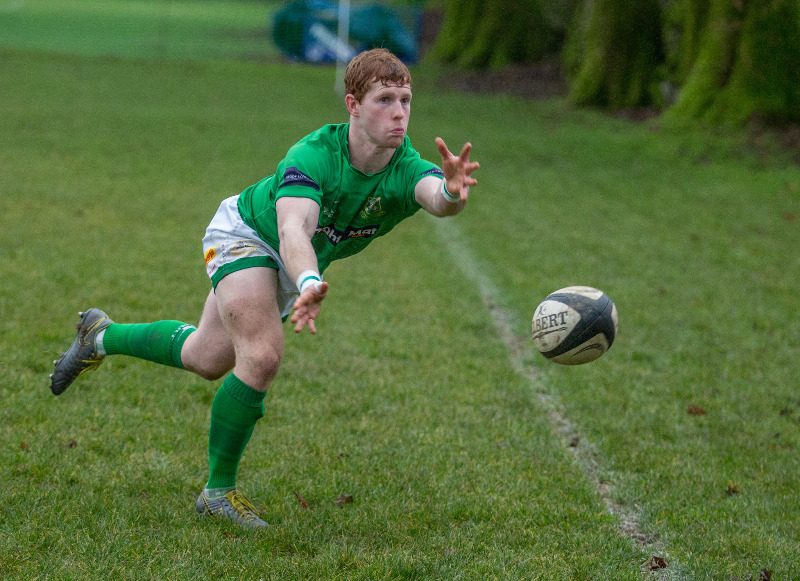 photo by Ro Burridge
Dale nearly held out for the full 10-minute penalty but Lucs did string some passes together and got into Dale’s 22. Wharfedale turned the ball over but Luctonians opened the scoring when a clearance kick struck a Wharfedale player and Luctonians gathered the ball deep in Dale’s 22. Three phases later their Number 8, Aiden Cheshire, crashed over from close range for an unconverted try.

Wharfedale had the lead by half time with two penalties from the boot of Jack Blakeney-Edwards. The first penalty came after a clever restart which gave Cicognini possession. 5 phases later Dale were awarded a penalty. The second came minutes later after poor discipline by Luctonians gave away two penalties. The visitors did finish the half in Dale’s 22 but they lacked cohesion and could not put enough phases together to trouble a strong Green defence.

Dale were soon in Luctonians 22 in the second half but a catch and drive was poorly executed and the Green machine were in reverse gear. Scrum half , Henry McNab, then opened up the Luctonians defence with a great break and Blakeney-Edwards was on hand to take the scoring pass. No conversion but Dale had extended their lead to six points.

The visitors strove to get into Dale’s 22 but the turning point came when Dale turned the ball over and cleared up to half way. Josh Burridge then leapt like a gazelle to steal the line out. Luctonians discipline was poor and they were soon defending deep in their 22.

Lucs were reduced to 14 when their No.5, Owen Harriot-Davies, sent George Hedgley crashing to the ground in the line-out. From the ensuing line out an effective catch and drive ended when the ball squirted out the back. Dale then dropped the ball to allow a jubilant Lucs to clear up to their 22. 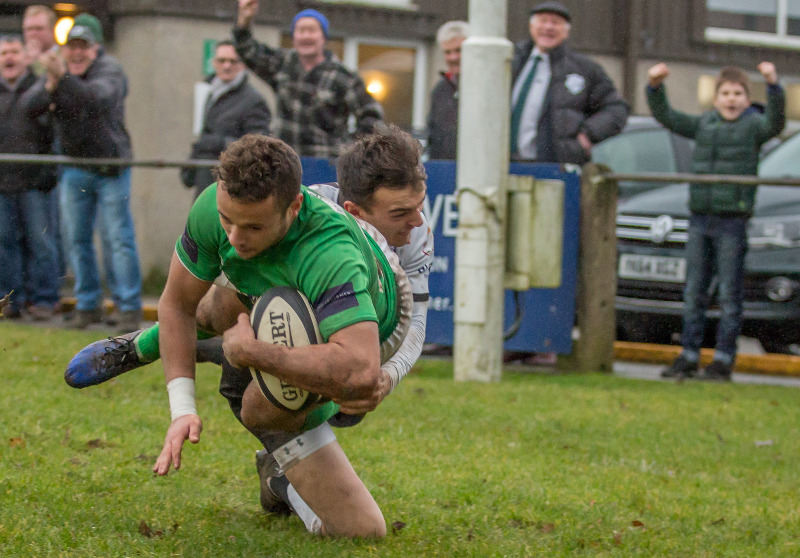 Dale’s second try came when Matt Speres picked up a loose ball and put Oli Cicognini in for a try. Blakeney-Edwards converted from the left touchline.

The home side used the wind well in the second half with Blakeney-Edwards finding space behind the defenders to gain valuable yards. The last twenty minutes were spent in Luctonian territory. The visitors were not helped as their line out fell apart. First, they threw over the top and Dan Stockdale enjoyed a charge at the defence. A minute later Simon Borill soared like an eagle and won the ball. After a series of offences by the visitors, Callum Young, was Yellow Carded and they spent the last 7 minutes down to 14 again.

Wharfedale rounded off the scoring with good handling which allowed Oscar Canny to score wide to the right, his first try for the senior team. Up stepped Blakeney-Edwards to show he could convert from out wide on either side.

Star Man, in the Rugby Paper, went to Oliver Cicognini. His kick chase brought rewards and his running at, through or round would be tacklers warmed the coldest of the faithful on a cold day.

There were other strong performances. Blakeney-Edwards’ in-field kicking was intelligent and it was painful for the visiting forwards to see the ball flying over their head only to trudge wearily back into their 22. Henry McNab grew in stature and control as the match wore on. Ben Blackwell was his usual wrecking ball self and also forced an important turn over. Simon Borill continued where he left off last week against Loughborough and again proved his status as a first team player.

Highlight of the afternoon for many was the last scrum. The Luctonians scrum was destroyed with youngsters Sam Dickenson and Ben Patchett propping. 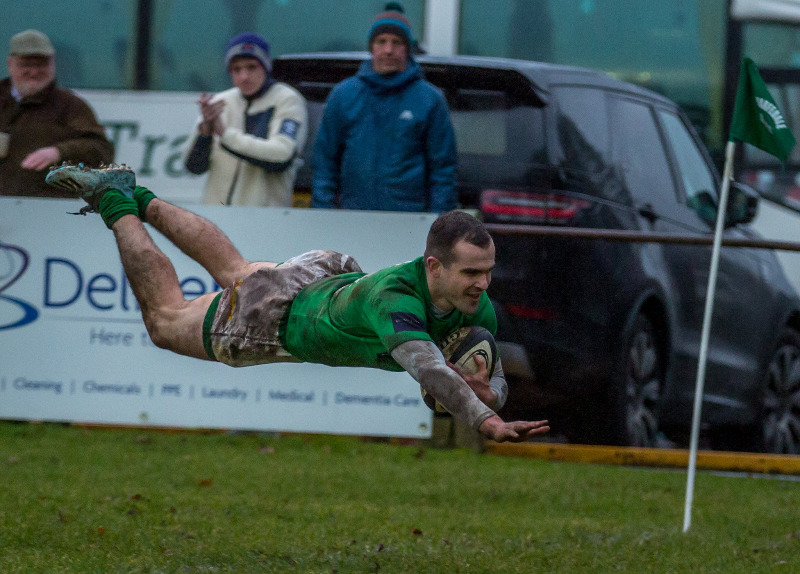 photo by Ro Burridge
Head Coach, Jon Feeley, commented:
“We've turned around consecutive losses against a strong side coming off the back of consecutive wins. That takes some mental strength and this week we showed what we are capable of. They were a physical side and to reduce them to 5 points was a phenomenal effort in conditions which suited a more direct approach. In addition to our defence, I was particularly impressed by our game control, especially in the second half where our kicking game and domination of possession choked them of opportunities. This is a young team which yesterday started to show great maturity in their decision making. It is important moving forward that we keep developing these skills and use them to manage games”.

The conditions were not perfect for open, running rugby and there was a fair amount of kicking during the match. Both sides however did try to move the ball around but it was Dale who handled the conditions better than the visitors.