What Can Happen In One Internet Minute? 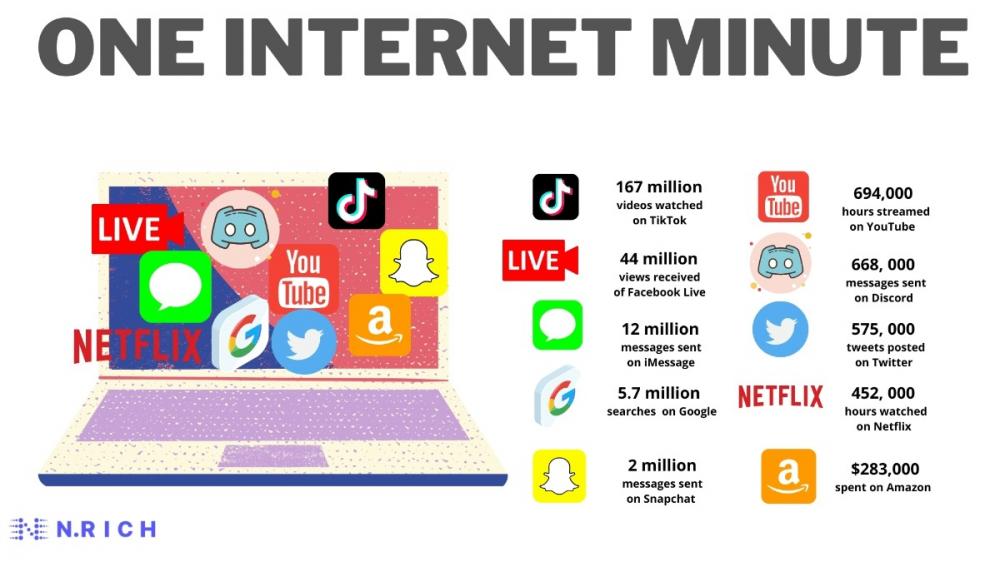 What can happen in an internet minute?

Millions of videos, messages, emails, and texts are uploaded and viewed, and the content consumed adds up to hundreds of thousands of hours in real-time.

In the study, Statista data was analysed to calculate the public’s engagement with the most popular corners of the internet.

Facebook receives 44 million views each minute via Facebook Live. While on iMessage 12 million messages are sent on the Apple service in the same timeframe.

Each internet minute, 5.7 million searches take place on Google. While on Snapchat 2 million messages are sent via the app in that period of time.

Each minute, 694,000 hours are streamed on YouTube, which equates to roughly a month in real-time.

Newbie app Discord is responsible for 668,000 messages being sent every minute.

On Twitter, 575,000 tweets are posted during the same timeframe.

Video streaming site Netflix is also popular, with 452,000 hours watched each minute on the website.

Amazon lives up to its powerhouse reputation, with $283,000 spent on the e-commerce site each minute. That's almost $7 million spent within 24 hours.

Commenting on the study, a spokesperson for N.Rich said: "With a vast number of people online and advertisers vying for the attention of potential customers, it's vital that you speak to customers in a way that they hear you and feel heard too. You wouldn't speak to your best friend the same way as your grandmother. That's why you need to adjust your message for each platform and find the right customers where they are – be it on TikTok, Facebook, or elsewhere. "
One internet minute


The study was conducted by N.Rich, which offers a rich array of intent data and ad inventory that enable marketers to drive awareness and lead generation effectively.