‘Why Endure My Own Dehumanization?’: Assembly By Natasha Brown 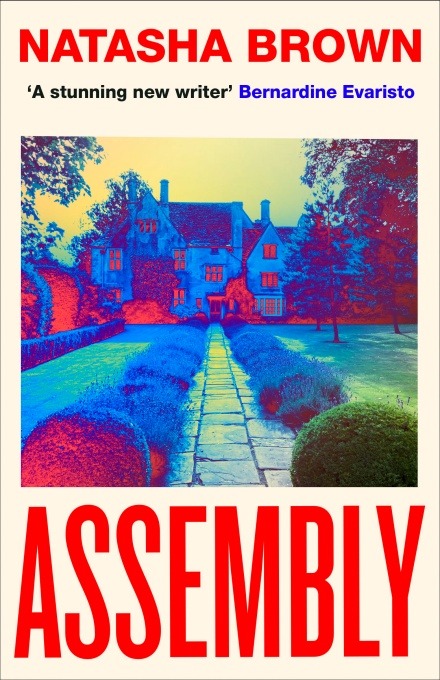 James Baldwin once wrote, ‘The purpose of art is to lay bare the questions that have been hidden by the answers’. It is a desideratum of oppression that inconvenient truths be occluded, Nietzschean constructs rising like treacherous mountain ranges from the impenetrable foggy foothills of unexamined inequalities. A society that does not question its ideology risks a zeitgeist morally sullied by cognitive bias and one in which individuals become unknowingly complicit in heinous social injustice. Baldwin recognised the inimical nature of both ignorance and prejudice and responded with questions conceived so as to remove the metaphorical mortar holding the bricks of unjust society in place.

Toni Morrison is considered by many to be a master of the ‘Public Novel’. Such works examine the very fabric of contemporary society, exploring racism, sexism and the nature of civilisation itself. Acute political sensitivity sharpens the prism through which ugly truths are disinterred. The reader is forced to confront issues, which if left otherwise unchecked, threaten to dehumanise society with carcinogenic, insidious stealth. Morrison’s celebrated lyricism lifts her work to a sublime form and though she may dislike being referred to as a ‘poetic novelist’, form plays just as much a role in the power of her work as does insight, compassion and humanistic understanding.

Natasha Brown’s debut Assembly can be seen as such a ‘Public Novel’, though at one hundred pages in length, I consider it to be a bravura exercise in the essay novel genre. Brown has orchestrated her avant-garde fiction around the most quintessential English scène à faire…a garden party housed within the opulent splendor of a grand country house. Juxtaposed against this elitist trope, itself epitomising romanticised aristocratic privilege, Brown has given us an intimate portrait of one black British women’s traumatic psychological disintegration. Our protagonist questions the contrived nimbus forming her identity and in so doing, begins to dismantle the assembled facets of her own persona.

Echoing both Baldwin and Morrison, Brown poses questions designed to untether her protagonist’s assimilated consciousness from its neo-liberalist moorings, forcing confrontation with the very forces which both solidify her being and denude it of meaningful authenticity. Not only is Brown’s debut a scintillating tour de force in terms of intellectual vigour and insight, it utilises a stunning array of unconventional narrative techniques to both convey and graphically represent its core themes. Modernism meets Dada and Brown’s conspicuously unconventional novel does justice to Hugo Ball’s comment, ‘For us, art is not an end in itself, but an opportunity for the perception and criticism of the time we live in’.

Essentially Brown’s novel echoes Joyce and Woolf in that we focus upon a brief moment in time, whilst simultaneously exploring an inner landscape of boundless complexity. Consequently, our skeletal plot comes in the form of our narrator’s first person description of her existence as black British women climbing the misogynistic ropes slithering within a rapacious City finance house. Oxbridge educated, our unnamed protagonist has clawed her way out of poverty and achieved affluence and its sybaritic sibling, modest materialistic success. We meet her preparing to attend a lavish garden party at her boyfriend’s family estate ensconced deep within the bucolic sanctuary of the English countryside.

As the scion of a minor aristocratic family with its old money hands on the levers of power, her boyfriend constitutes a bridge to the promised land of acceptance by the upper echelons of society. As the event approaches, the imposed paradigm informing her existential identity begins to deliquesce like a ripe fruit in the summer sun. Values once solidly forming the bedrock of her known reality, disintegrate as our protagonist questions her desire to participate in a post-colonial system built upon narcissistic capitalism, blatant racism and the disenfranchisement of those hoodwinked into supporting it. This crisis point loosely summits Freytag’s pyramid as time blurs and personal discontent becomes ever more distinct.

Our protagonist’s lived experience is concertina’d into en passant reflective musings juxtaposed against impressionistic descriptive passages of recent events. Time itself is compressed by the vice-like grip of an unsettling epiphany. Brown seeks to immerse the reader in her protagonist’s consciousness, echoing the words of George Buchanan, ‘The novel is an event in consciousness. Our aim isn’t to copy reality, but to modify and recreate it’.

For me, the sheer technical legerdemain of Brown’s artistic expression, her willingness to defy formative convention is nothing short of thrilling. Haruki Murakami once said, ‘It is the inherent right of all writers to experiment with the possibilities of language in every way they can imagine- without that adventurous spirit nothing new can be born’. It seems Brown agrees.

The lapidary precision of her modulated, sparse prose is paradoxically lyrical, whilst also sharpening the teeth of her every sentence to razor sharp points which enable them to lacerate their thematic targets with surgical skill. Brown employs poetic free verse, two pages taking this unexpected form and being wrought from dictionary definitions, themselves soaked in the cognitive bias of the lexicographers who compiled them. We see parataxis, margin notes, entire pages given to unmarked space and indentations throwing stress upon words given significance not by connotation, but by their position on the page.


Also by Paul Spalding-Mulcock...
Procrastination - An Avery StoryReview: The Naked Don’t Fear The Water: An Underground Journey With Afghan Refugees By Matthieu AikinsBar Review: Y's Bar & Snap, HolmfirthTaken In For Questioning - An Avery StoryReview: Mrs Pinto Drives To Happiness, By Reshma Ruia
Allusive references to seminal texts help to amplify unvoiced sentiments or add resonance to critical expressions. Postmodern Blackness by bell hooks enables Brown to comment upon decolonialisation, whilst the use of ‘historical self’ directly draws upon Citizen: An American lyric by Claudia Rankine, itself a work providing the ideological substructure for Brown’s own treatment of similar themes. We even have a tweet posted and quickly deleted by HM Treasury patronisingly informing us that ‘@ Millions of you helped end the slave trade through your taxes’. Ironically, the tweet did not point out that these taxes service the interest payments on capital payments made to slave owners as compensation for the cessation of their ignominious activities!

Stream of Consciousness is deployed, rendering the prose on the page as pipetted blobs of concentrated, impressionistic globules of the protagonist’s fractured psyche. Realism counterpoints these passages with ugly representations of casual racism, sexual harassment and the insolent promulgation of normative behaviours born of empirical legacy, corporate immorality and the banality of hope when confronted with systematised abuse of liberty. Woolf’s influence melds with the voice of D.H. Lawrence to provide paragraphs reminiscent more of Cezanne than Proust. I detected notes faintly reminding me of Jericho Brown and Joan Houlihan, in that prose in Brown’s hands becomes fluid, visceral and profoundly evocative.

Language itself is subject to the scrutiny Brown brings to bear upon society: ‘How can I use such language to examine the society it reinforces ?’. She goes on to write, ‘These words, symbols arranged on the page (itself a pure, unblemished vehicle for objective elucidation of thought ), these basic units of civilisation – how could they harbour ill intent ?’.

By deliberately breaking with conventional form, Brown unsettles her reader. The prosaic quotidian become less familiar and detached from the context in which it is usually encountered and societal reality is seen afresh. For me, this artistic verve signals the arrival of a truly breathtaking literary voice. Let’s not forget Assembly is a debut, a first outing. The éclaircissement of its author’s structural innovation can only foretell yet greater works to come.

Thematically, we have the reverberance of Orwell’s 1945 essay ‘Notes on Nationalism’, in which he warns us, ‘identifying oneself with a single nation or other unit, placing it beyond good and evil and recognising no other duty than of advancing its interests’ is inimical to any society’s wellbeing. He goes on to say that nationalism is, ‘inseparable from the desire for power’.

Brown casts contemporary society as being an act of anastylosis, a breathing monument to empire, to neoliberalism, capitalistic avarice and grounded in institutional racism. Patriarchal prejudice, sexism and elitist overlords are exposed, and their vile abuse of human liberty eviscerated. Power is unflinchingly explored and seen to be the roughly made club used to beat the defenceless into submission in the name of curated tradition and omitted historical sins.

The novel’s most damning assertion is that black women are forced to survive by assimilating into society, accepting its colonial past as an unimpeachable good. Brown tells us that, ‘Everything is a trade’ and black women either reflect Dr Inger Burnett-Zeigler’s clinical psychology theory that strong black women hide their pain in order to survive, or they rebel. Brit Bennet’s The Vanishing Half shows us just how difficult it is to escape from the gravitational pull of societal racism and retain a sense of authentic liberty. Brown presents us with a women who has chosen to reject societal compliance, having looked into the abyss and found it staring back to articulate the fundamental injustice of dehumanizing postcolonial group think.

As we witness Brown’s protagonist dismantle her own identity, we simultaneously see society drained of its nostalgic lunacy. Beneath the bigoted rhetoric of the privileged, the smug platitudes of the liberal intelligentsia, sits a grotesque truth…society is a cage manufactured by the minority to repress the will and autonomy of those who might otherwise challenge the prevailing racist paradigm. Brown has given us a women who concludes - ‘the thumping nationalism of this place. I am the stretched-taut membrane of a drum against which their identity beats. I cannot escape its rhythm’.

So, a novel of coruscating originality, emotional potency all voiced with astonishing artistic vim. I will leave it to another voice to articulate Brown’s truth, that of Thucydides: ‘Justice will not come to Athens until those who are not injured are as indignant as those who are injured’. Brown’s debut is a must read for any member of society with a conscience and a penchant for bold literary excellence.


Assembly is published by Hamish Hamilton