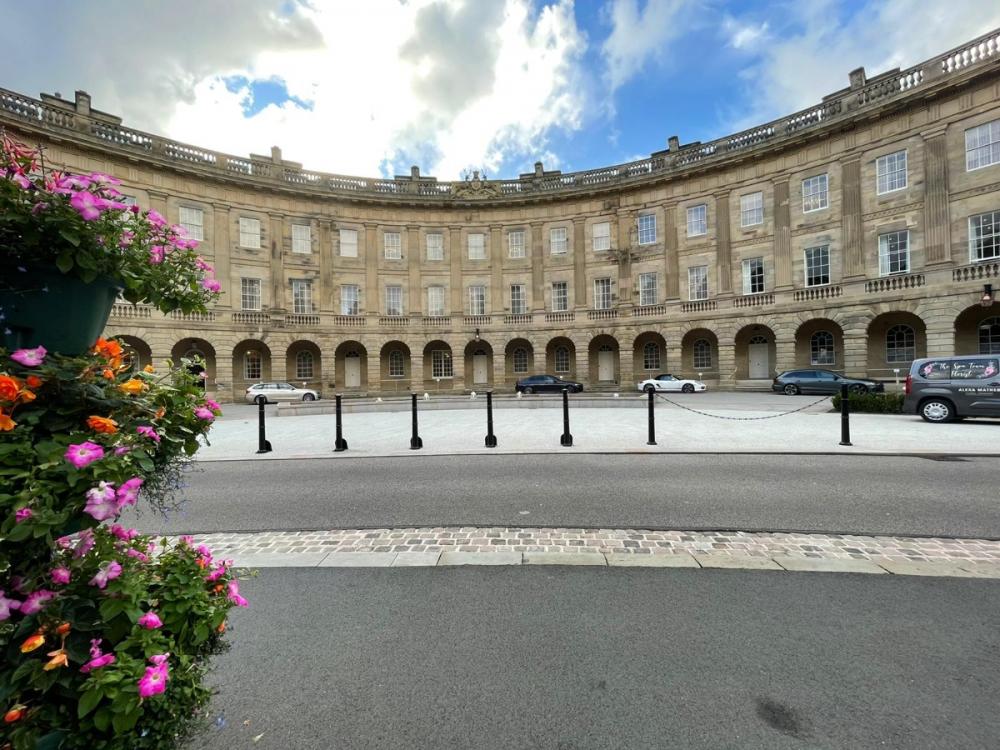 Historically Buxton in Derbyshire has been famed for two things: its spa waters and, since 1903, Frank Matcham’s opera house.

Now, there’s a new ‘old’ kid on the block: the spectacularly restored Grade I-listed Buxton Crescent Hotel, originally two ‘spa’ hotels built in the 1780’s by the Fifth Duke of Devonshire, but only recently returned to its former glory as one beautiful residence.

Surrounded on three sides by the equally picturesque Peak District National Park, this property, like so many others, is emerging from lockdown, and is now desperately focussed on re-introducing itself to the world following a refurb, that has been trumpeted as costing somewhere between £70m and £80m, depending on which media you read! 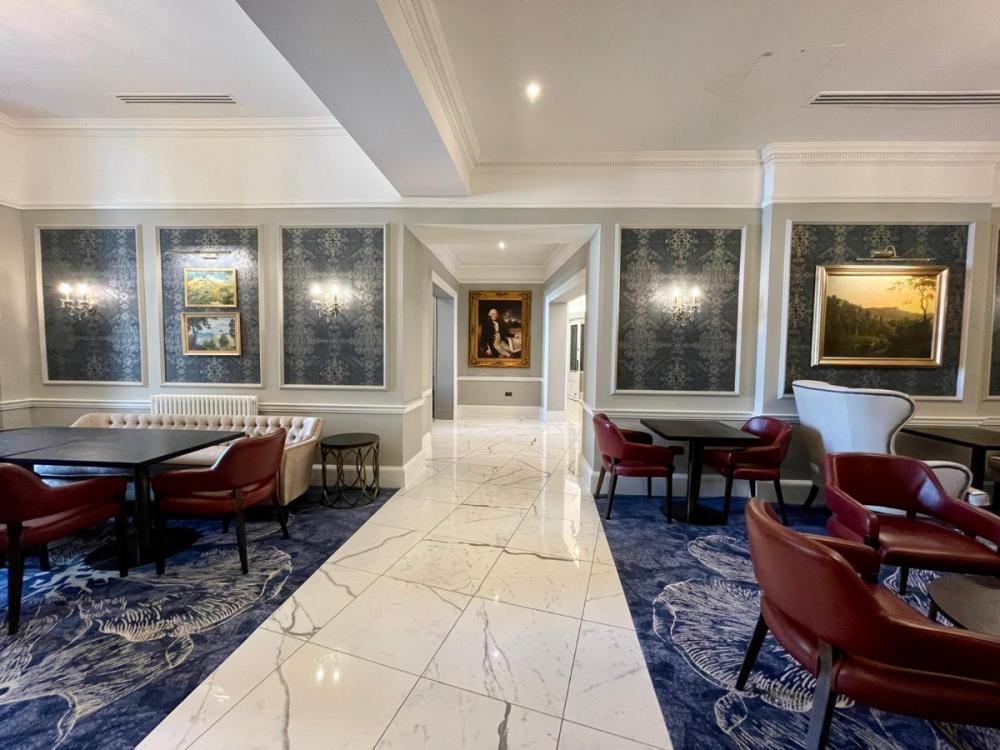 However, that is merely a number, for the undisputed truth of the matter, is that this 81-room hotel and spa is visually breath-taking, and the only thing missing when you approach its crescent-shaped façade and entrance, is Jane Austen in a landau!

It has all the hallmarks and look of Georgian Bath – architect John Carr is said to have taken inspiration from the Somerset town’s glorious Royal Crescent - but this takes nothing away from that first view which, for a split second, makes you draw breath, admire, stand and pause: one of those few times in life when the beauty of a building gives you permission to say nothing but simply gawp!

For decades the hotel attracted the great and good of upper-class society, keen to partake of its natural spring waters, until it fell out of favour in the 1940’s and into subsequent decline before closing in the mid 1980’s. 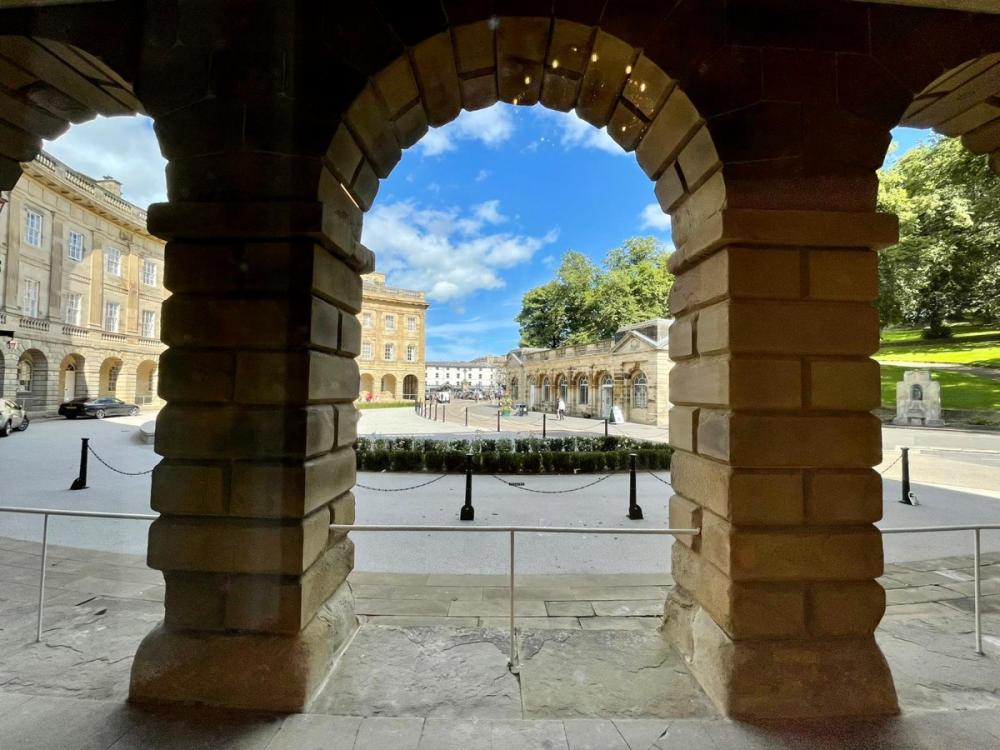 However, if the Buxton Crescent is one thing, it is resilient and, more than three decades on from when its doors closed for what many believed would be the last time, the phoenix has risen aided, somewhat, by its new owners, Ensana Hotels (https://www.ensanahotels.com/buxton/en), a health spa specialist with properties across Europe from Hungary and Romania to Slovakia and the Czech Republic. 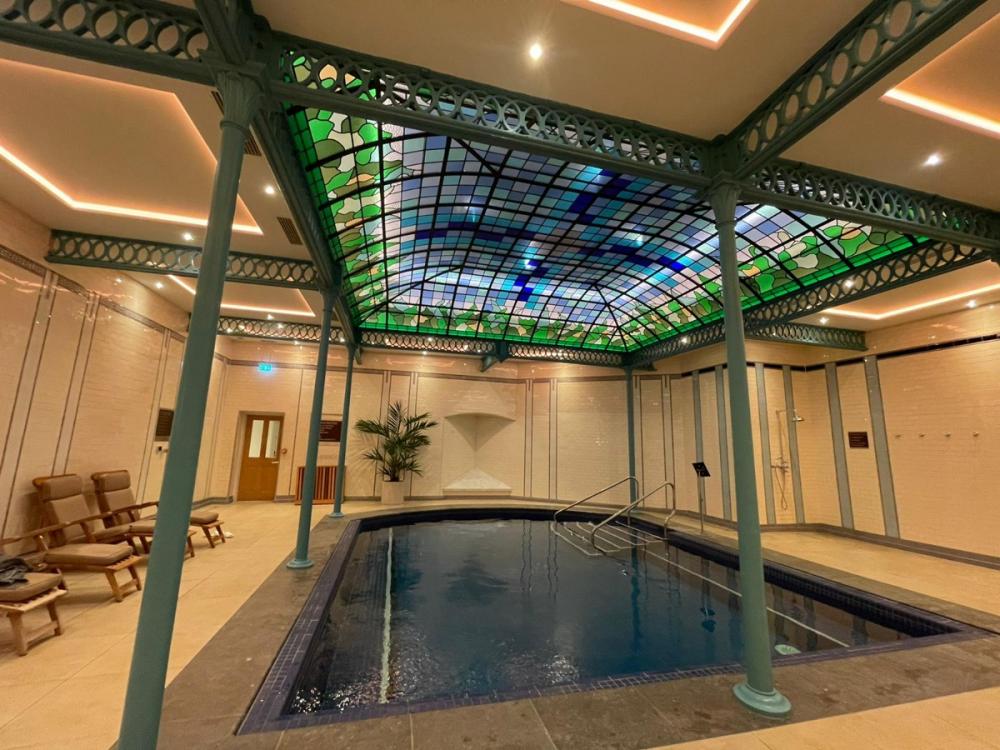 “We have watched this place come to fruition bit by bit for the last 20 or 30 years,“ said one local. “There were lots of faltering starts.”

The official number is probably nearer 17 years, nevertheless, it’s taken longer than your average refurb and, to casual onlookers, probably appears to have taken for ever!

All said, it is a truly regal building but, despite this, the Buxton Crescent Hotel did leave me slightly conflicted although I do put my reservations down to a combination of Brexit – staff shortages and all that – and Covid – getting to grips with new ‘rules’ that probably last existed in 1918, when Spanish Flu ruled supreme.It is advertised as a five-star property and, with that, comes not only a price tag but certain customer expectations. 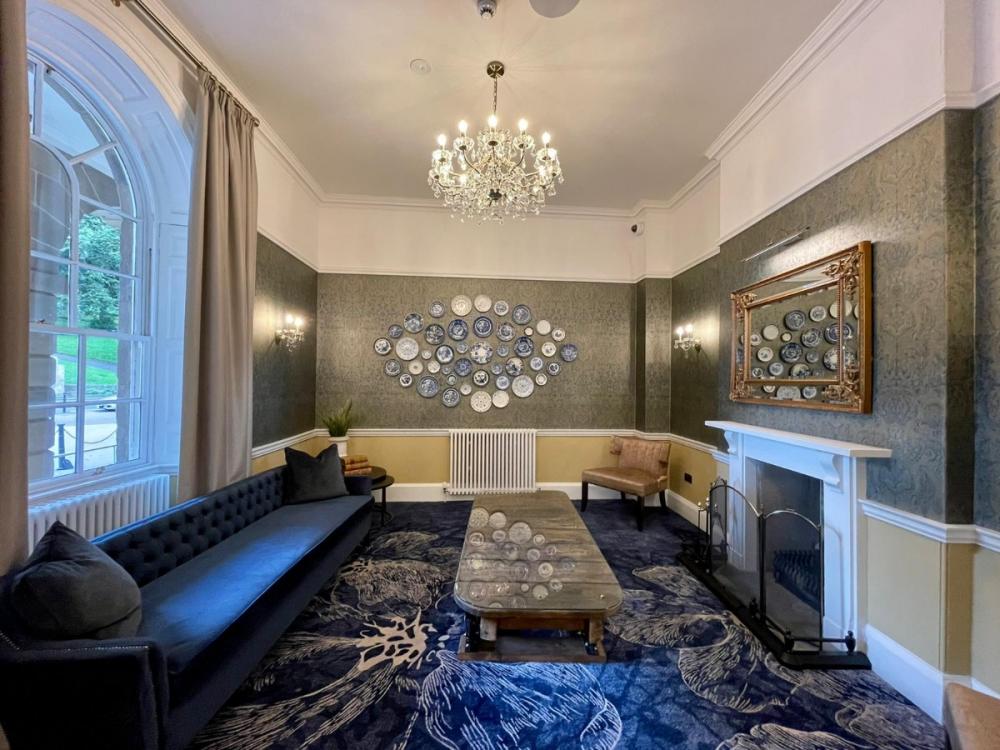 There was a lot of staff inexperience and, at times, it felt as if the extremely polite young men and women in question should have been at home swotting for their A levels.

Maybe a lot of newbies had started simultaneously although, in truth, if it were the case, it would hardly be surprising in an economic climate where hospitality staff have been at an all-time low: many restaurants have been closing half the week because they can’t get staff.

Check-in was efficient but not personal: wham, bam thank you mam!

“Breakfast is between 7am and 10am sir. You need to book a slot but you can only have 8.15am or 9.45am because everything else has gone,” said the
receptionist, barely pausing for breath.

“Thank you and here’s your key sir.” I was just waiting for her to say: “next.”

Nearby the young concierge was clueless as to whether the on-street parking opposite was free for a couple of hours or not, and it didn’t help that one of the pay and display machines was no longer there, even though the sign directing drivers to it, was!

When I returned with my luggage about 15 minutes later – having parked on a nearby street (there is a valet parking service available) - I was left wandering a downstairs corridor looking for the lift until I stopped someone to ask where it was: I had been walking in the wrong direction!

Someone should have challenged me, plenty of staff passed silently without batting an eyelid.

Equally, domestics should not be allowed to systematically wedge open corridor service rooms... 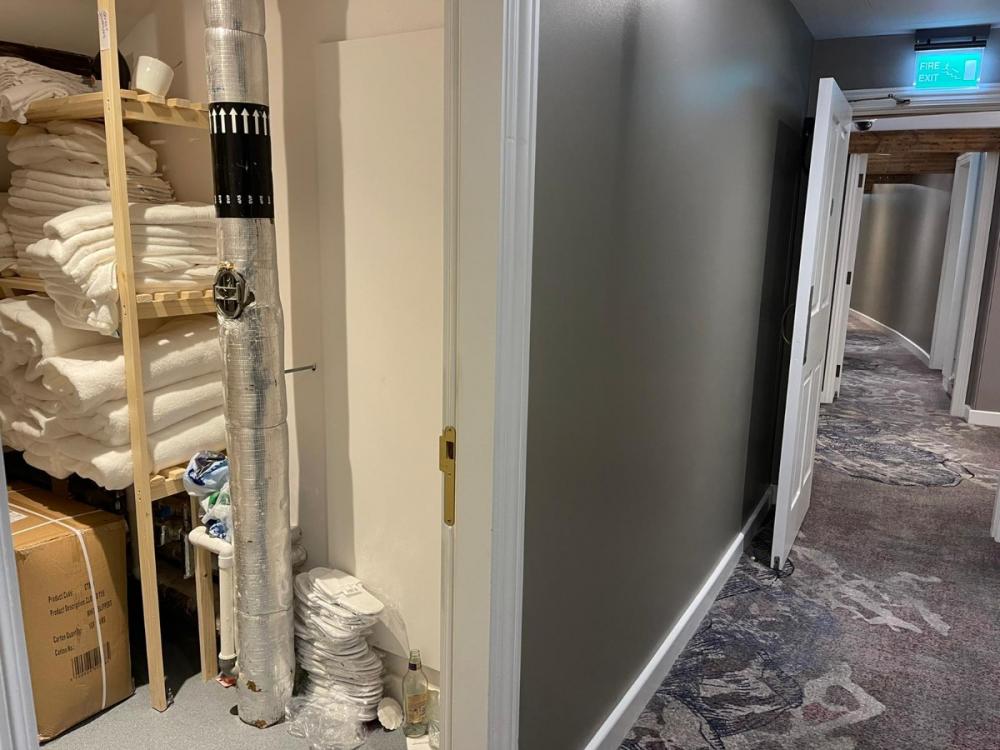 ... for extended periods of time, so that people like me decide to take a photo after two hours! This IS a five-star hotel and that should never be forgotten by anyone. But the facilities were wonderful. 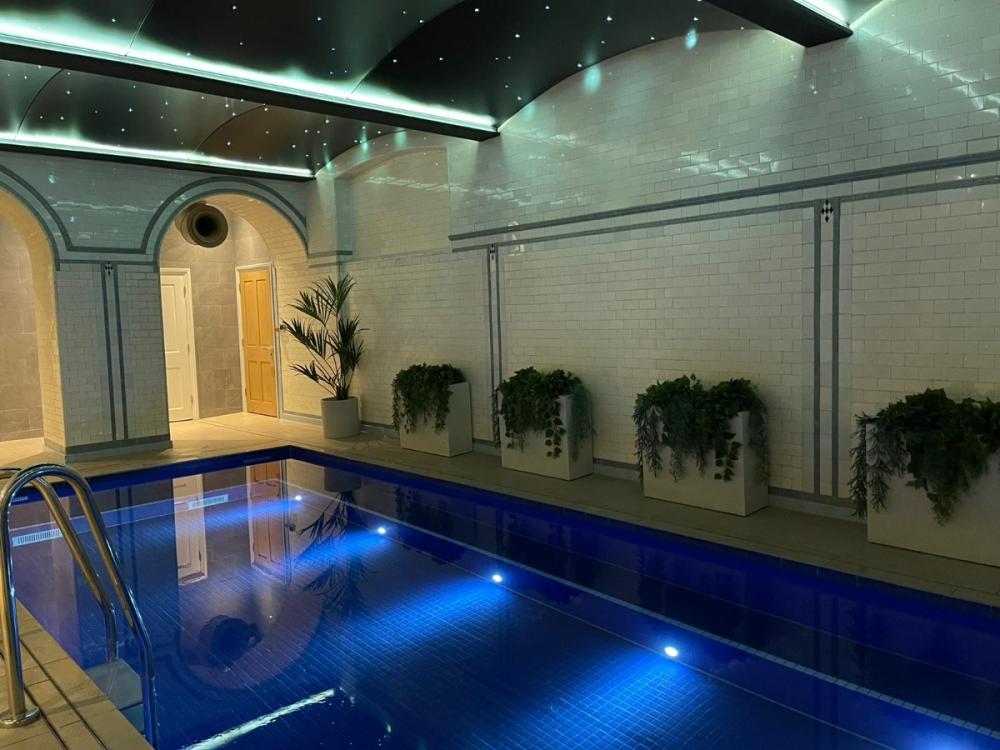 The spa includes the original thermal pool surrounded by Victorian cast-iron pillars, with a new stained-glass dome atop whilst, nearby, there is a relaxation pool with mood lights, an indoor/outdoor hydrotherapy pool one flight up and, elsewhere, a salt cave – clears the nostrils and chest I believe - three saunas (Finnish, biothermal and infrared) and two steam rooms (traditional and aroma). Yes, the spa is superb, it really is, and the staff there couldn’t have been more professional. 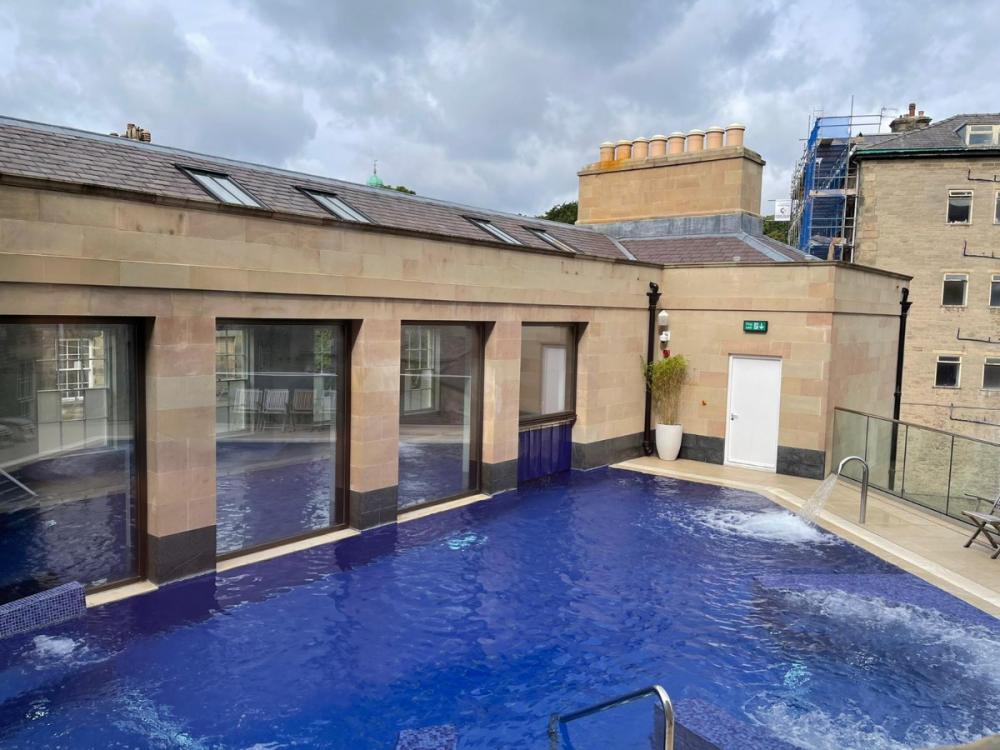 You can also opt for an array of treatments from an underwater jet massage – which I enjoyed – to a hot mud bath and a CO2 mineral equivalent. A few hours in the spa is more therapeutic than a lifetime in the gym, because it relaxes you to your core and, trust me, you will sleep like a baby! But dinner firstThe restaurant overlooks a courtyard statue of the Fifth Duke of Devonshire and is aesthetically pleasing but, again, staffing issues raised their head. 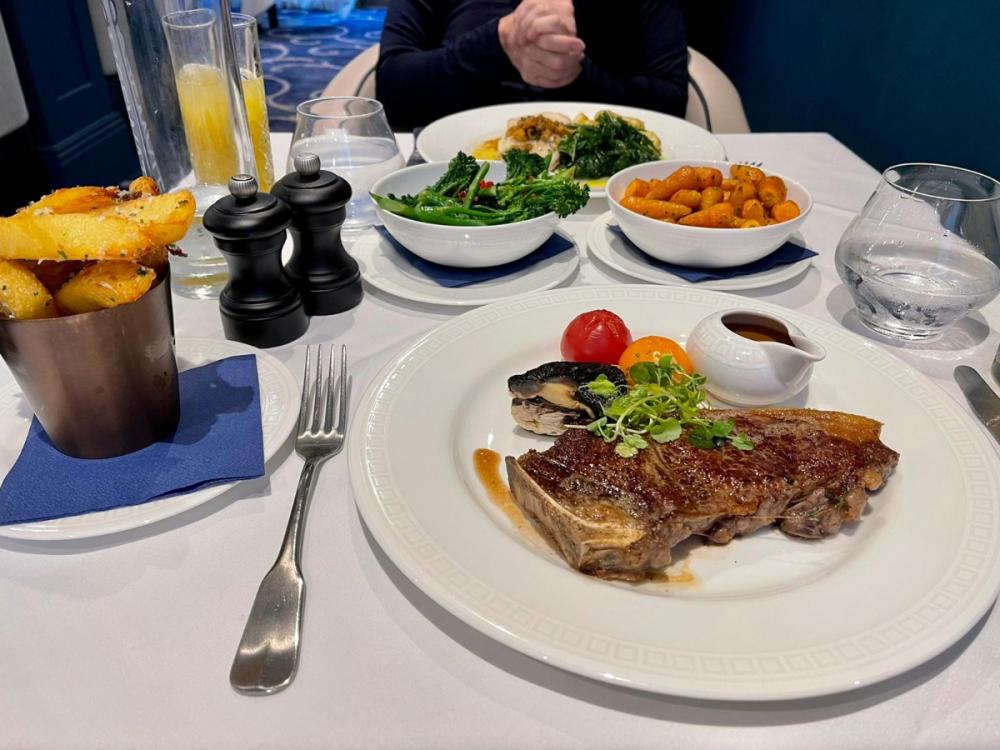 The lady serving my starter – all the food was excellent – cleared my plate at the same time she delivered the bread basket which should have come with the first course! “I’m terribly sorry,” she said, “this was meant to be with the salmon. Can I take your plate?”

Meanwhile, there were lots of ‘not quite sure what I’m doing’ glances from some of the younger personnel. The stronger presence of a Maître D’ figure – someone clearly in control – would have gone a long way to changing this scenario and given such a junior staff more silent confidence. 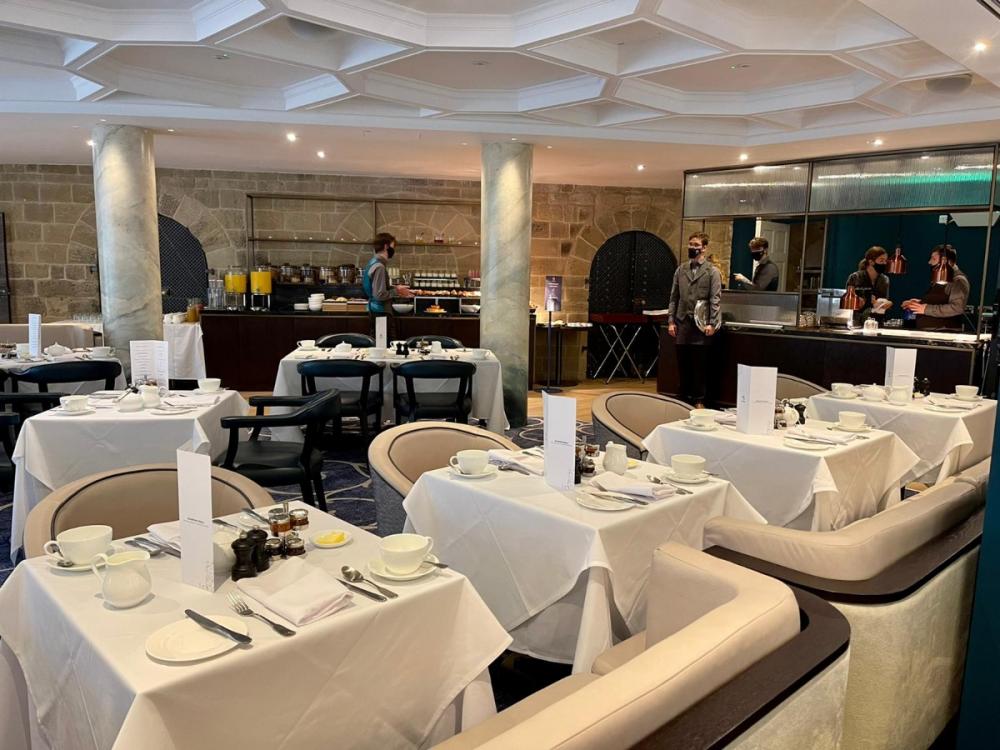 We slept soundly in our fourth-floor loft room with its wooden beams, homely atmosphere, comfy bed and balustrade views of the town and, next morning, were ready for our 8.15am breakfast!

But the dining room was more than two thirds empty. I quickly realised that the ‘paced’ entry of individuals entering the room was because staff had been instructed not to allow any self-service at the breakfast bar.

People were allowed to walk across to the food area, accompanied and in their masks, point to what they wanted then return to their tables to await service: applaudable in its intent but way too labour intensive to work.

Next morning, with a wedding party in situ, and more ‘people chaos’, this approach was abandoned. Right decision. 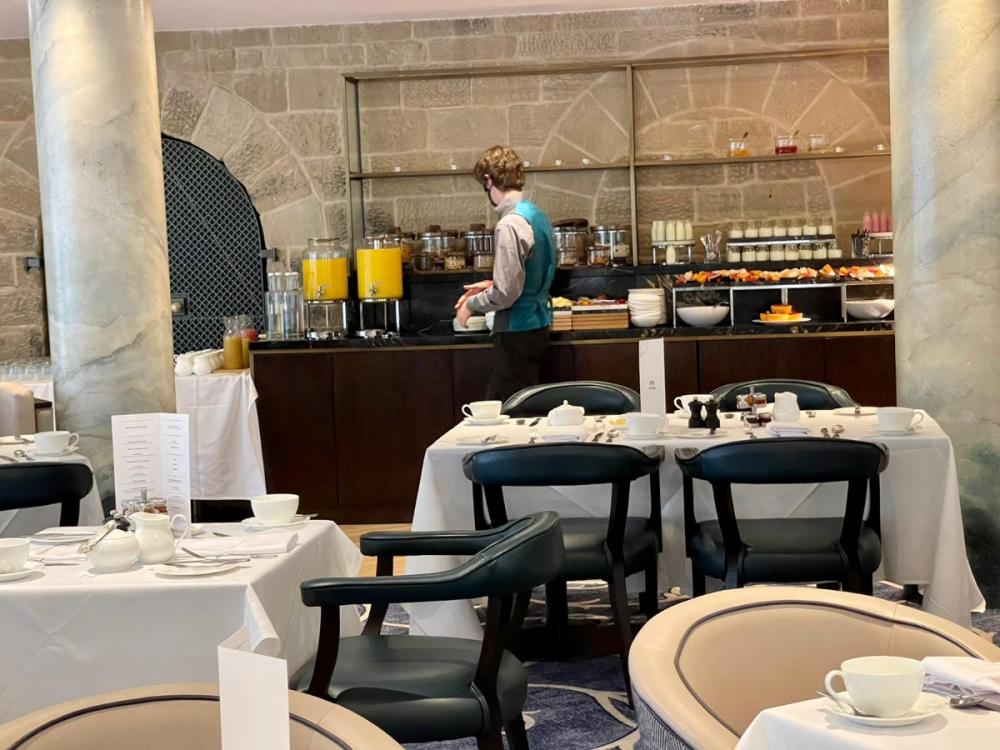 Either have a breakfast bar or, in an emergency situation – Covid for instance - re-think and offer ring-fenced food option at tables only….just like London’s Middle Eight Hotel in Covent Garden. Equally the St Paddington Renaissance opted to leave their breakfast bar operating with a compulsory ‘mask’ mandate.

The Buxton breakfast hybrid didn’t work initially but did so perfectly on day two. Again the food was five star. 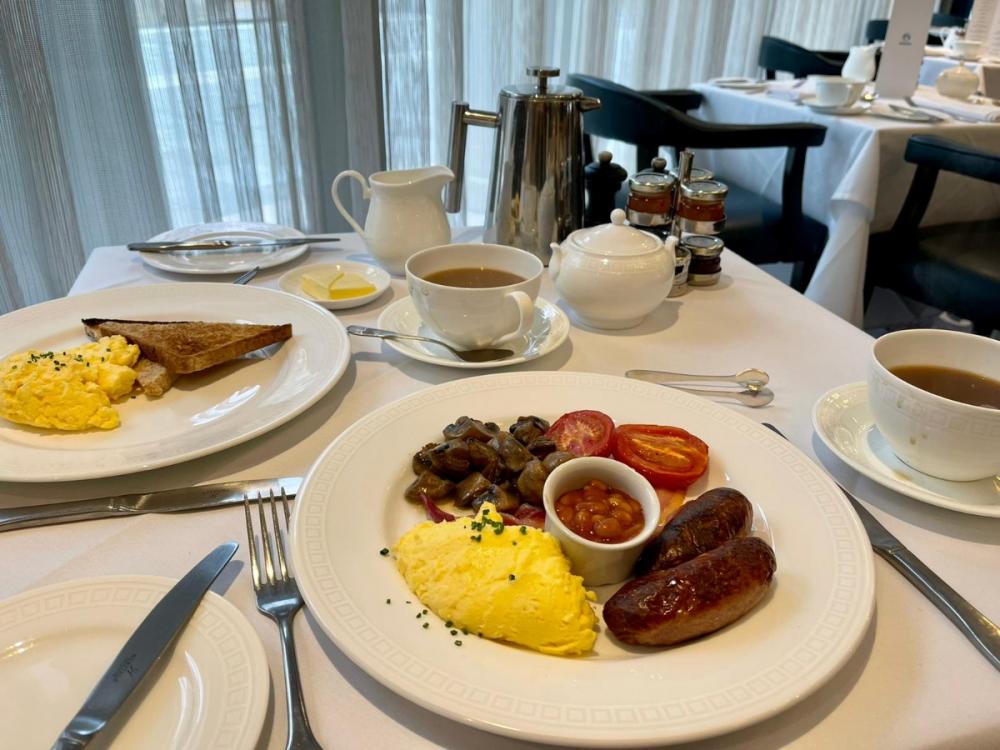 Did I enjoy my stay? I did. Would I go to Buxton again? I would.

It is a town fighting to return to the glory days of a bygone era and, whilst there is still a lot more investment to happen before the phoenix can truly take flight, Buxton is going in the right direction and the Buxton Crescent Hotel is a glorious addition to the town. 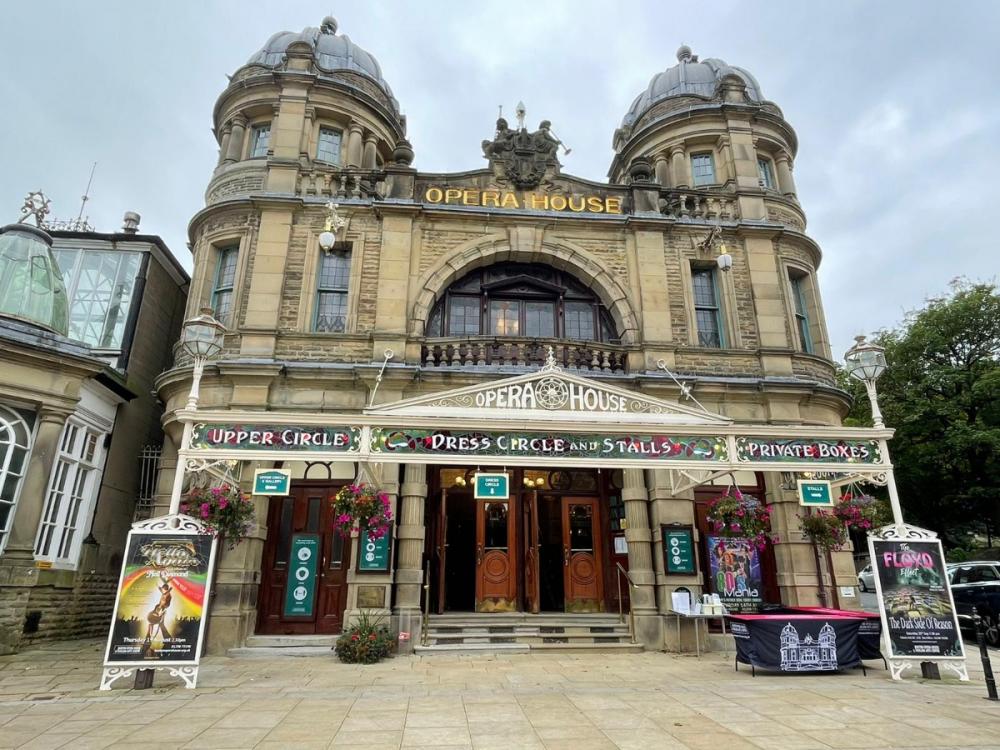 However, to use an opera analogy: if you advertised Pavarotti at Buxton Opera House and the Go Compare tenor arrived, there’s nothing to say that you wouldn’t have a good time – after all Wynne Evans did sing with the Welsh National Opera – but, if you’d shelled out to see the world’s number one tenor, you wouldn’t be too chuffed if good old Wynne turned up!

However, its service was running at a top-end three- star level, desperately playing catch-up. There’s still something of a quantum leap to be made for that heralded fifth star, but it wouldn’t stop me visiting again, you just might need a little patience.

Circumstances in the country have been challenging. Some of these challenges have, no doubt, permeated into the Buxton Crescent Hotel. Like the dentist, invite me back for a six-month check-up so that I can leave with a beaming smile on my face. For now it’s just a broad smile!
Also by Phil Hopkins...
Enjoying A Roast(ing) In The Oulton Summer SunBumper Discounts on Manchester to US FlightsNew Open-Top Bus Service For BridlingtonQatar Trumpets New Tourist AttractionsNew Stay & Dine Package With Gino D’acampo