It was a dream start for The Minstermen, as they took the lead with just five minutes on the clock
York City confirmed their long-awaited return to the National League following a tight encounter with Boston United in the Promotion Final. 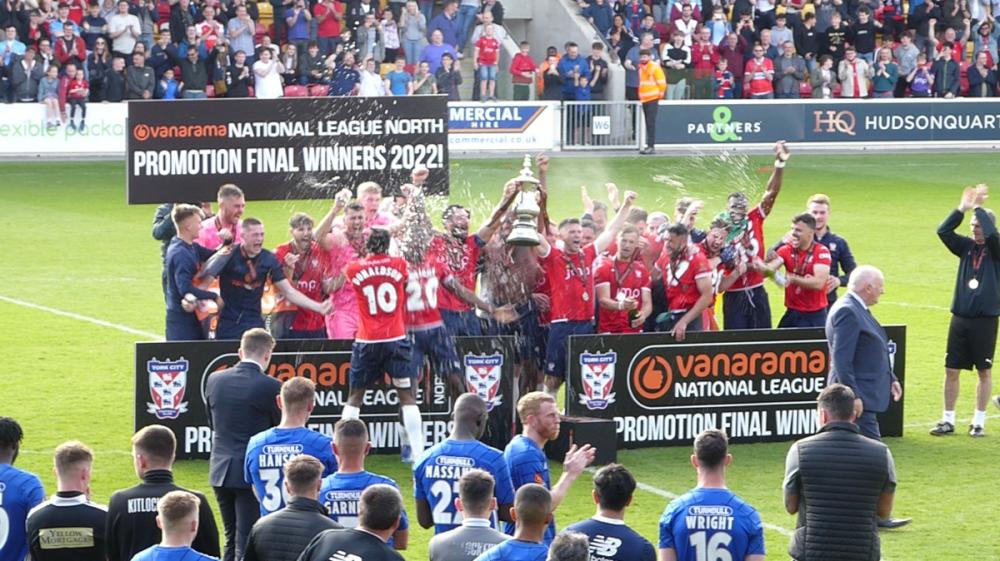 Home fans' nerves turned into celebrations with five minutes to play, as Maz Kouhyar put the game to bed, sending City to the National League.

A phenomenal playoff campaign in National League North eliminated some of the top teams, and left 5th placed York City to take on 7th place Boston United at home, in the promotion final.

Despite injury doubts over in-form Lenell John-Lewis, the striker made the starting eleven, John Askey’s York team unchanged from their semi-final win at Brackley. Paul Cox only made one switch to Boston’s lineup, with Jake Wright Jnr coming in for Ntumba Massanka.

It was a dream start for The Minstermen, as they took the lead with just five minutes on the clock. A throw into the box from the left couldn’t be cleared by Boston, and fell to John-Lewis, who brought it down and fired it into the bottom corner, his fifth goal in six greeted by a deafening roar.

Both sides came close shortly after, as Luke Shiels fired well over from inside the area for The Pilgrims, before City’s Paddy McLaughlin also did the same, missing the target completely.

Visiting striker Danny Elliott wasn’t far away from finding the equaliser on 25 minutes, but from a few yards out, scuffed his half-volley with a miskick that evaded Pete Jameson’s goal frame.


York City then sealed their promotion back to The National League, as a late Maz Kouhyar goal put them 2-0 up with five minutes to play.
However, it wasn't long before the hosts were looking dangerous again - a good spell of possession resulted in a goalbound effort glanced away, which was followed by a long range Akil Wright shot rising into the North Stand.

Eight minutes before the break, veteran striker Clayton Donaldson tried a looping effort, which looked to be heading in, but only for the crossbar, which came to the Boston ‘keeper’s rescue.

United were the first to make an impact after returning for the second half, as captain Shiels got onto the end of a corner but somehow blazed it well over the bar from point-blank range.

With just over 10 minutes remaining, York ‘keeper Jameson pulled off a brilliant save to tip a deflected free kick from Shane Byrne round the post, before cutting out all danger again, blocking a Massanka shot.

York City then sealed their promotion back to The National League, as a late Maz Kouhyar goal put them 2-0 up with five minutes to play. Donaldson contributed largely with a great tackle, before giving the ball to the Afghan, who cut inside and made no mistake in scoring at the near post to send The Minstermen up.