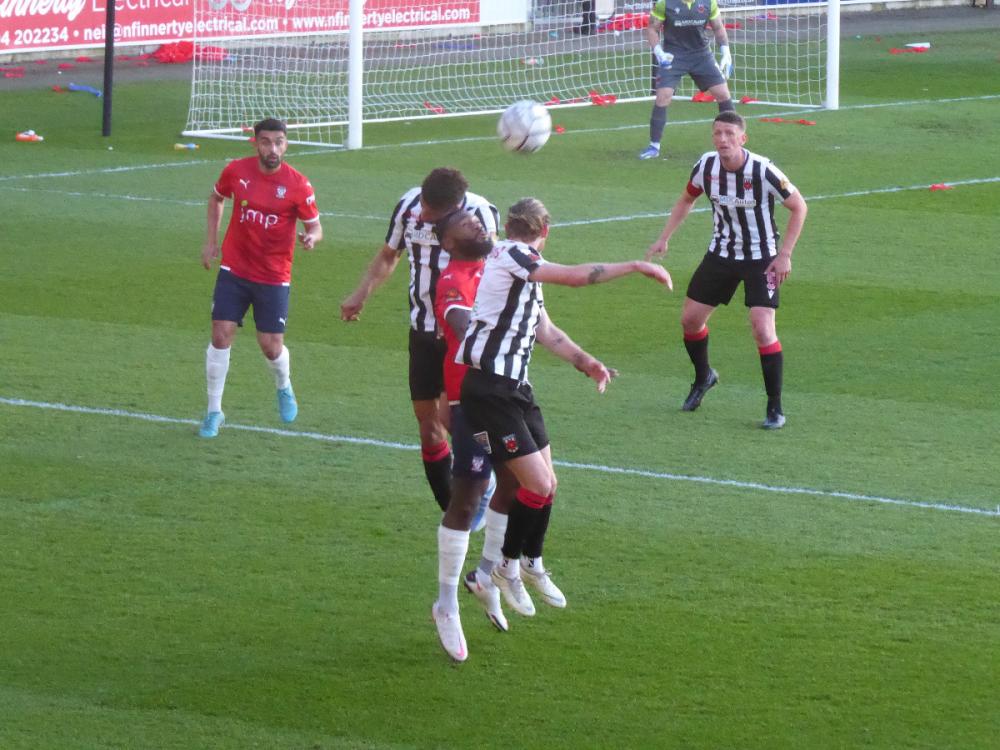 Lenell John-Lewis and Billy Whitehouse battle for the ball - photo by Ryan Brookes
A record attendance of 6,394 witnessed a special night at the LNER Community Stadium - Lenell John-Lewis sent the crowd wild after just 10 minutes, with an exquisite chip over the 'keeper from 25 yards out.

Chorley found their equaliser 15 minutes later, Connor Hall bundling home at the far post, before City went on to snatch the winner, 49 minutes in, as Mitch Hancox took it round the 'keeper and put The Minstermen 2-1 up.

Chorley were made to pay for a disappointing loss on the final day of the season, only at the expense of York City, who finished above The Magpies and were all set to host them for an intriguing playoff eliminator at the LNER Community Stadium.

John Askey fielded a City side, which was unchanged from the previous home game against Fylde.

Just 10 minutes in, a deafening noise was forced out of the home crowd, as Lenell John-Lewis found the opener with a brilliant chipped finish. A ball over the top found the in-form striker, and he did the rest, lobbing the Chorley ‘keeper from 25 yards.

Six minutes later, The Minstermen had their second attempt on target, as Mitch Hancox squared it to captain Paddy McLaughlin, but his shot went straight down the ‘keeper’s throat.

Chorley soon had their first opportunity, but it was a tame one from Millenic Alli, who’s distanced effort didn’t really trouble Pete Jameson.

The visitors’ second chance did end in glory though - a free kick on 25 minutes was headed back across goal, allowing Connor Hall to merely squeeze it in, past Jameson at the far post.

York looked to regain their lead shortly after, with an inch-perfect cross from Hancox finding Jack McKay, but he could only knock it out of play, McLaughlin so close to getting a touch.

Yet another pitch invasion greeted a massive York City win, as they advanced to the semi-final, which takes place at Brackley Town on Saturday (or Sunday).
The home side, and most of the stadium thought they had the goal they were searching for, minutes before half time, but Magpies’ ‘keeper Matt Urwin came flying out of nowhere to stop Hancox’s brilliant half-volley, meaning the scores were kept level at the break.

Despite attacking their opposite fans in the second half, York still managed to grab a defining goal four minutes in, through Mitch Hancox. The converted midfielder once again showed his quality as he burst through on goal and took advantage of a slip by Urwin, before slotting home into an open net, sparking some raucous celebrations amongst the masses of City fans.

The visitors continued to press for a hopeful equaliser, and they were in a relatively good position to net it with 19 minutes left to play, but after a great passing display, Jack Sampson skied his effort well over the bar.

Deep into injury time, Chorley almost found the goal that would take the tie into extra-time, but failed to do so as the York 'keeper watched a shot go narrowly past the post.

Yet another pitch invasion greeted a massive York City win, as they advanced to the semi-final, which takes place at Brackley Town on Saturday (or Sunday).