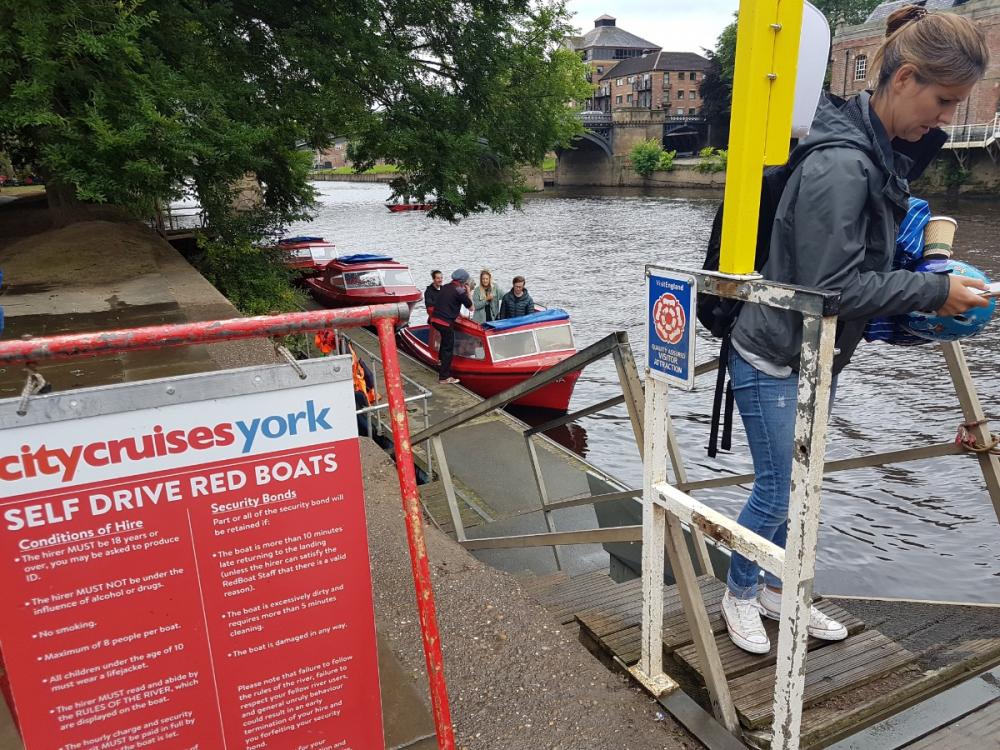 “Got yer Mack Uncle Phil? “ taunted my niece. “We’ve got a picnic to die for but it’s chuffin’ freezing and looks as though it’s going to chuck it down! Nice day for ducks.”

The tennis-style banter was being exchanged at the River Ouse quayside in York, just across from Clifford’s Tower, where six of us were waiting to board one of the numerous eight-seater self-drive river boats operated by City Cruises York.

It was fairly quiet in Tower Gardens to say that it was noon and we were in one of the most popular tourist cities in Europe, let alone England, partly due to the questionable weather, but more likely because the city, like so many others, was just waking from its three-month Covid slumber!

Nevertheless, spirits were high, two-metre distances were being observed (except in our family bubble!) and there was a steady queue to board one of the small red boats which queued patiently, engines chugging, waiting to take their charges up and down the Ouse for a one hour jaunt.

It was the first time I’d had the opportunity to view this ancient Roman city from the river and to see its wonderful bridges, many of which I’d crossed a thousand times. 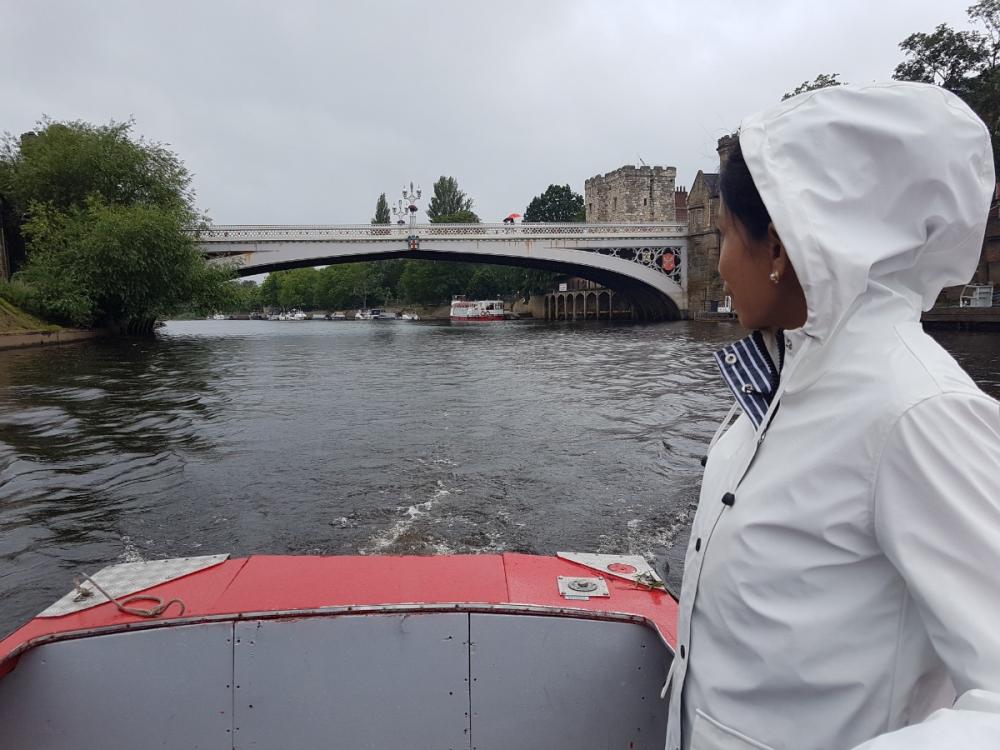 It brought back memories of my time as a cub-reporter on the Yorkshire Evening Post four decades earlier, when my news editor rang in the early hours and said: “York Minster’s burning down, get over there.”

It could have been a lifetime ago but, right then, the real challenge was steadying the feet and balancing with more dexterity than a tightrope walker in Mr Barnum’s circus. Seconds later we had pulled away from Red Boat Landing, my niece at the helm.

“It’s ok,” assured by sister-in-law, “Steph’s got all her sailing qualifications.” 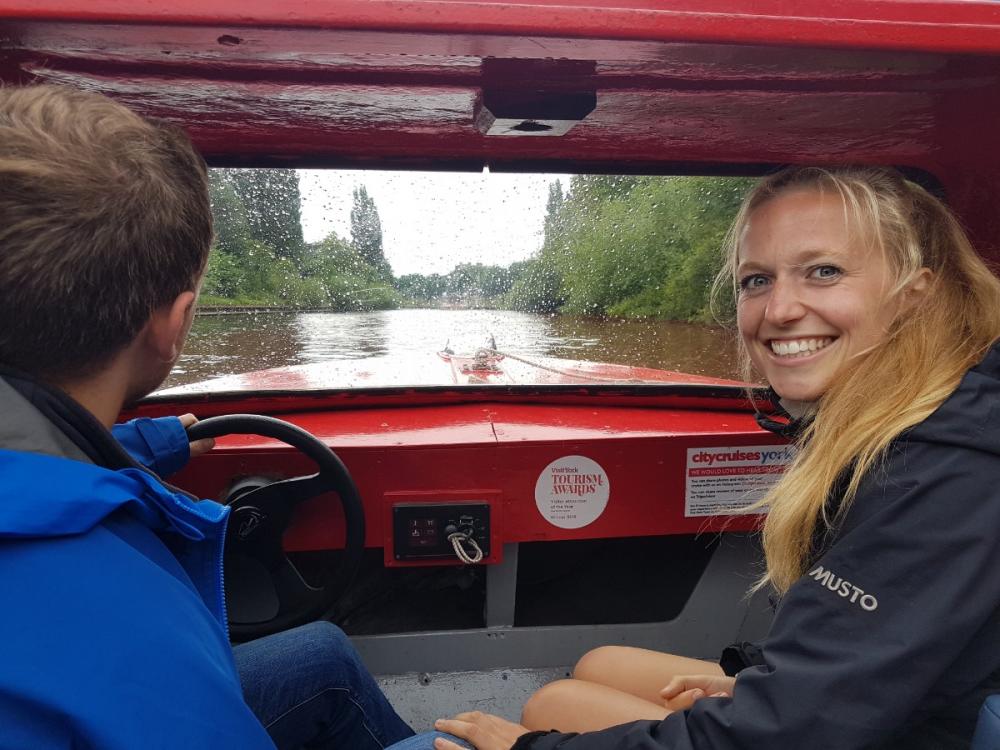 In the safe hands of a qualified sailing instructor!
Not that it mattered because the boats are simple. The engine’s permanently running, the pre-sail briefing is all of sixty seconds and there’s little that can go wrong.

“Stay on the right….go up four bridges – Ouse, Lendal, Scarborough & Clifton - turn around…..come back down…..pass the Red Boat Landing departure point…..continue down another three – Skeldergate, Blue & Millennium Bridges - then turn around and come back here. Oh yes. Be sensible and avoid any big boats by staying on the right!” 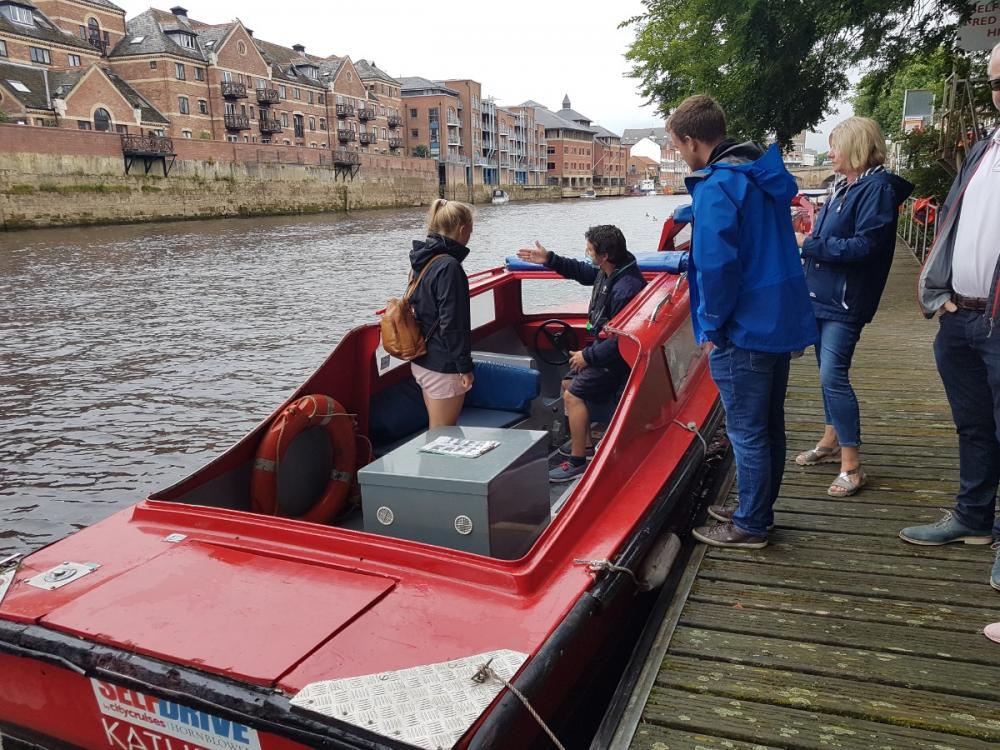 A Brief Encounter
The pre-sailing brief had been simple.

I have lived in the shadow of York all my life and it is a city that you never tire of, however, like any ‘locals’ there is so much that you take for granted and most probably never see up close and personal.

So, it is nice once in a while to pause for breath and do something usually reserved for visitors or tourists from foreign climes.

It is a fun afternoon, even when the weather is somewhat damp, and, as anyone in Britain knows, a ‘bit ‘o rain’ cannot be allowed to spoil the entire weekend. It didn’t! 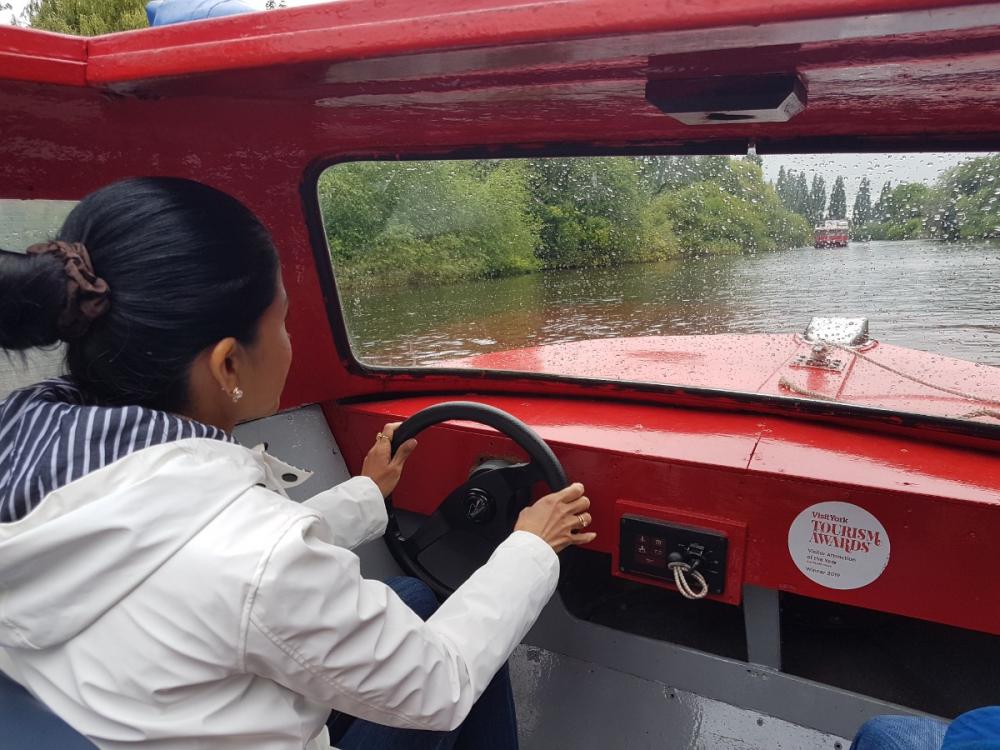 The sailing was smooth – we all took turns at driving (is that the right word?) – waved at the people enjoying drinks at the riverside bars, and at those unsuspecting individuals also traversing the Ouse from the covered comfort of one of City Cruise York’s bigger launches. “Isn’t that the pub that always floods when it’s chucking it down?’ asked my brother. 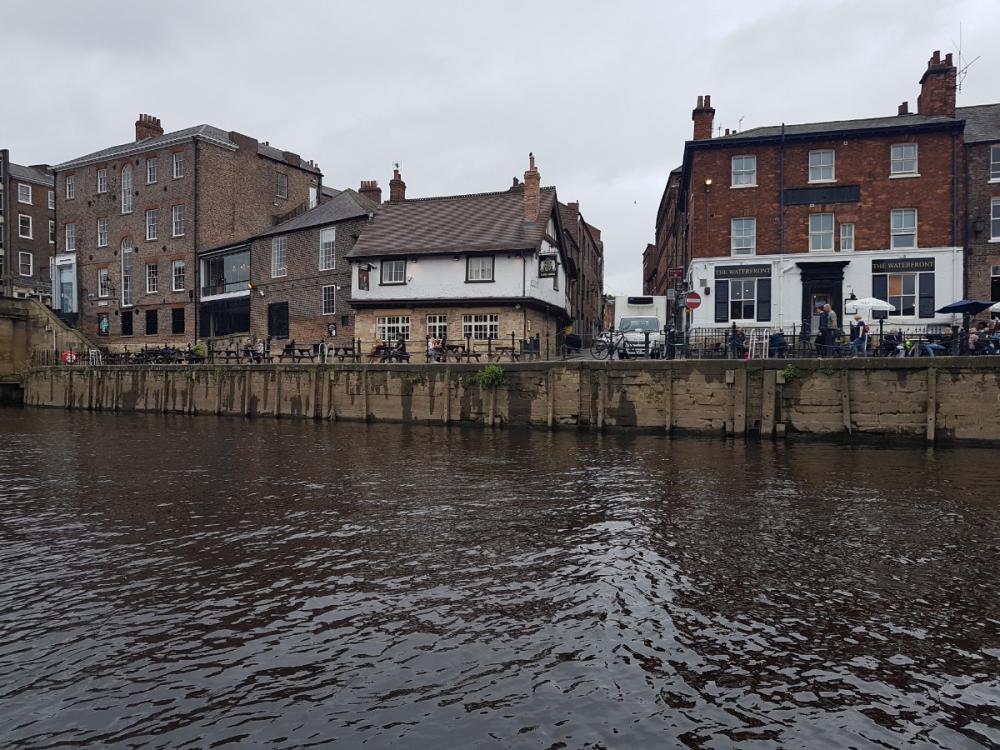 York's famous King's Arms Pub
He was of course referring to the famous King’s Arms, invariably featured on national tv whenever the Ouse burst its banks leaving bar staff pulling pints whilst wading in water up to their knees!

The Yorkshire Herald Building was now the Revolution bar – had Communism had the final word over a former capitalist newspaper baron? - and 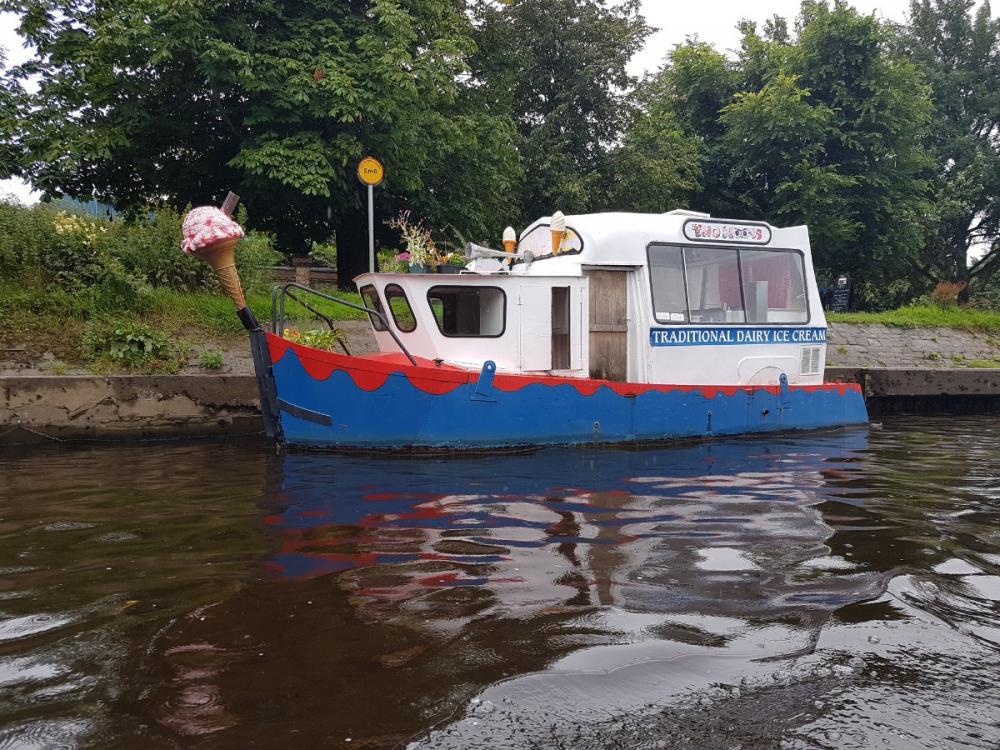 I scream, you scream, we all scream for ice-cream!
a small ice-cream river boat bobbed gently at the quayside eager to pick up a few quid from as yet invisible customers.

But it’s a fun afternoon and even better when followed by a drizzly picnic under a large tree at the side of the River Ouse! 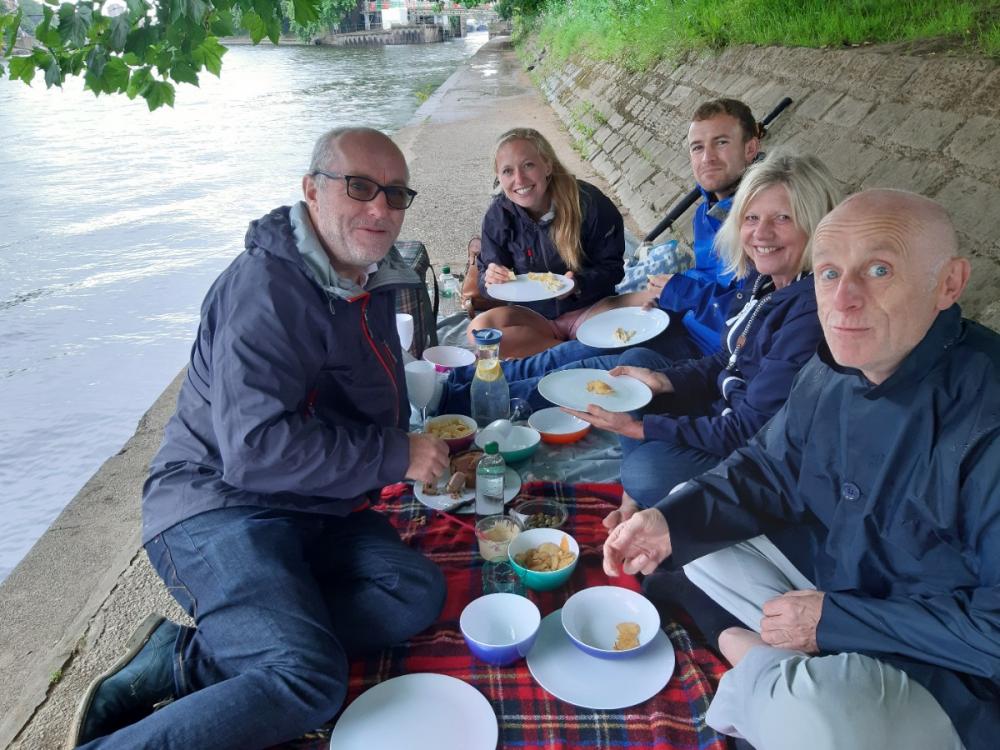 As my dear old mum might have once said: "Shut yer noise, you won't melt!" We didn't!