Mathilde with the letter to Rishi Sunak
A 14-year old student, Mathilde Iveson, from St Francis Xavier School in Richmond, North Yorkshire, has written to her MP, Rt Hon Rishi Sunak MP, the Chancellor of the Exchequer, to ask him to visit the school and help her and fellow students progress their plans to be a zero carbon school (see her full letter below).

She asks him to help the school increase biodiversity through more flower beds in and near the school, and by helping the school get hybrid or fully electric school buses.

Mathilde, who is in Year 9 and part of the school’s Eco Team, is very passionate about the need to make changes at school in order to reduce the UK’s climate emissions. She’s been involved in eliminating single use plastics in the school, litter picking and bulb planting, and is a key Eco Team speaker at school and in the community (pictured, second to right below).

Rishi Sunak visited the school in 2019, the year the school won the 2019 Education Estates Award for Sustainability. 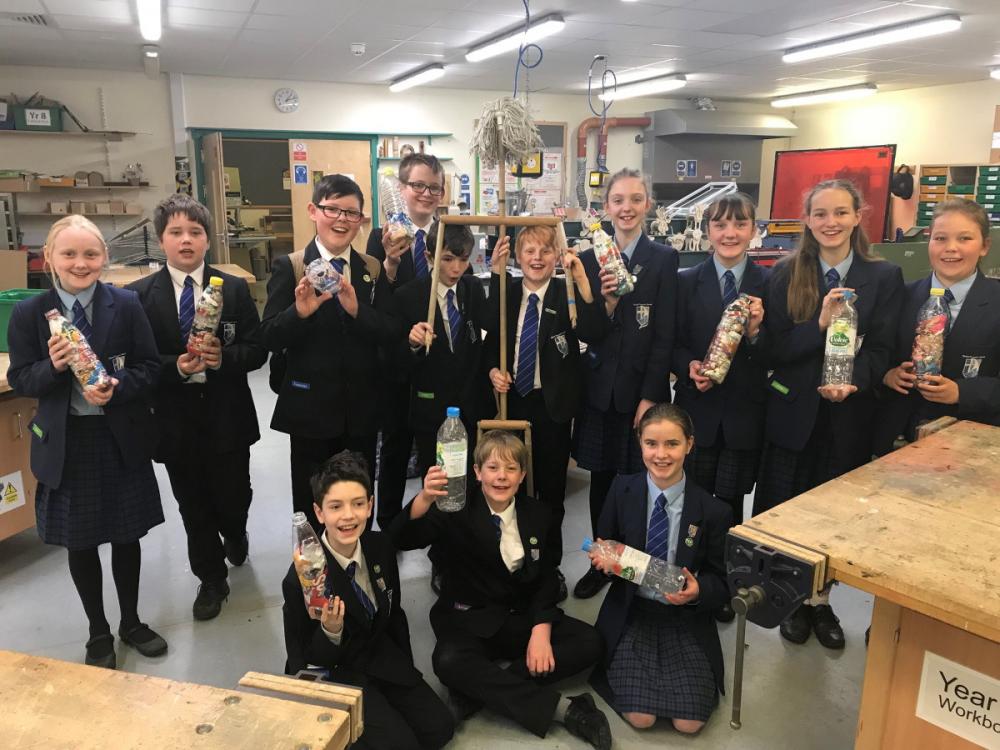 Students with Ronnie the Recyclist - a temporary art display in Richmond made from ecobricks (bottles stuffed with plastic litter), an old mop and a bicycle. Mathilde is second from right with fellow Eco Team members. Joshua (front row, far left), Jack and Charlie (holding the frame).
Since then the students have become even more aware of the climate emergency and have worked hard with their teachers and the Trust to step up their environmental actions.

Mathilde’s school, St Francis ,is part of the St Margaret Clitherow Catholic Academy Trust covering 17 schools in North Yorkshire (two secondary and 15 primary), which are now all working on their carbon reduction strategies, learning from St Francis Xavier, and collaborating on joint initiatives.

The Trust has signed up to Let’s Go Zero – a schools’ campaign launched this week (9 Nov) at the Youth Climate Summit. Trailblazing schools across the UK are joining Let’s Go Zero, pledging to be zero carbon by 2030.

Let’s Go Zero is run by Ashden (a UK-based climate solutions charity) in partnership with Global Action Plan and a coalition of sustainable schools organisations.

“We hope that the Chancellor Rishi Sunak MP listens to his constituent, Mathilde, and to all those thousands of schoolchildren and teachers showing such leadership on the climate. Up and down the country, schools are taking action themselves, giving a mandate to Government to support them with the backing, the policy framework, and the investments needed to reach zero carbon by 2030,” said Harriet Lamb of Ashden, who has also written to the Chancellor making these proposals.

“We are convinced that Government action to support schools reaching zero carbon would be popular and effective, generating thousands of badly needed local jobs in upgrading school buildings and energy systems.”

Mathilde also told Rishi Sunak in her letter how the staff and students have had a major campaign, switching off lights, projectors and computers when they’re not using them, and asked Mr Sunak: “Have you been doing this?”

St Francis Xavier school has an ‘Eco Police Team Department (EPTD)’ led by students Joshua and Jack (pictured above and see notes below) which (pre-Covid) went around after classes checking that all electronics have been switched off, and giving teachers a slip of paper reprimanding them if not. This has made a massive difference to school energy use, as well as getting children involved and motivated. They have now changed to congratulatory certificates to teachers who regularly switch off.

“In a way, Mathilde and her Eco Team colleagues have just done the same as they do with their teachers,” said Margaret Land, formerly Business Manager for St Francis Xavier School, and now, Sustainability Lead for the whole of the St Margaret Clitherow Catholic Academy Trust.

“They’re asking Rishi Sunak what he’s doing to stop climate change, asking questions, suggesting some answers, and calling on him to lead the way.”

The St Margaret Clitherow Catholic Academy Trust is currently applying for government funding towards the school’s decarbonisation plans, and wants to apply for energy efficiency measures, such as insulation and solar PV for all of the Trust’s schools.

“If 17 of our schools can all have support to decarbonise and the children can learn from that – they’ll see it and say, ‘wow not only are we doing these things but the leaders are putting investment into our schools too and that’s really going to change things’”, says Ms Land.

“Can you imagine decarbonising schools – that could be so powerful!”


Letter to Rishi Sunak from Yr 9 student Mathilde at Saint Francis Xavier School in Richmond (North Yorkshire), which is in his constituency.

As you are aware at Saint Francis Xavier School in Richmond (North Yorkshire) we take environmental issues very seriously. Since you visited we have increased our biodiversity within our school, but we were wondering if you could help us increase it throughout Richmond!

Some ideas that came to mind were having flowerbed road banks to help with pollination, or maybe put some more wild-flower areas in the park.

We have also been looking at ways to reduce our carbon footprint. We have encouraged everyone to turn their PCs, projectors and lights off at the end of each school day. Have you been doing this?

Even though this will be more of a long-term project, do you think it would be possible to change some (if not all) of the school buses into either hybrid electric or full electric? It would reduce use of petrol which would lower the pollution being caused by people who have to travel to get to school. Another thing is trying to encourage people, who can, to walk to school rather than drive, or if not walking then maybe cycling.

These are just a few ideas to help not just the school, but also the surrounding areas!

Other members of St Francis Xavier Eco Team include:

Charlie Yr 10 (age 15, left below, wearing jumper) – was the leader of the Eco Team and took over the school’s food waste work. The school has measured food waste since Jan 2018. They had a 20% reduction of food waste from five tonnes to four tonnes over 12 months, saving £500 in food waste disposal. Students scrape their plates into a bin which is set on food scales and measured daily. A compost bin collects raw waste, and the drinks cans are recycled locally. Pre-Covid the school eliminated almost all its single use plastic waste, having previously created waste of 60,000 plastic bottles a year. Sandwiches are now made on site, not bought in, to further reduce plastic waste.

Jack – Yr 10 (second left above) – Part of the Ecoteam for 3.5 years, and has led lots of initiatives including creating 'Ronnie the Recyclist' to raise awareness about single use plastics. The students organised and made eco bricks and then worked with the school’s technology technician to create Ronnie from ecobricks, an old mop and Ms Land’s mother’s old bicycle. Ronnie was on display in Richmond for the start of the junior UCI bike race. He attracted a lot of interest! Jack also started the Eco Team Police dept (now taken over by Joshua, below).

Joshua Yr 9 (age 14, pictured right) – aka Biodiversity Boy, has ordered plants to be put in classrooms to bring nature indoors. He has installed two wildlife cameras; a micro-pond; two hedgehog homes and several bird feeding stations, and currently creating a wildlife corridor. He drags different teachers to the end of the school field every day, to accompany him to the bird feeders. He was buying the feed from his pocket money until staff stepped in to also bring in fat balls, seed etc.

Amelie Yr 9 (age 14, pictured below with Jack) - very eloquent and passionate about the environment. Amelie (and Hugo) organised the school's 100th litter pick in February helping to raise over £500 for eco charities. A brilliant speaker, and presented their eco vision in the town hall last year. 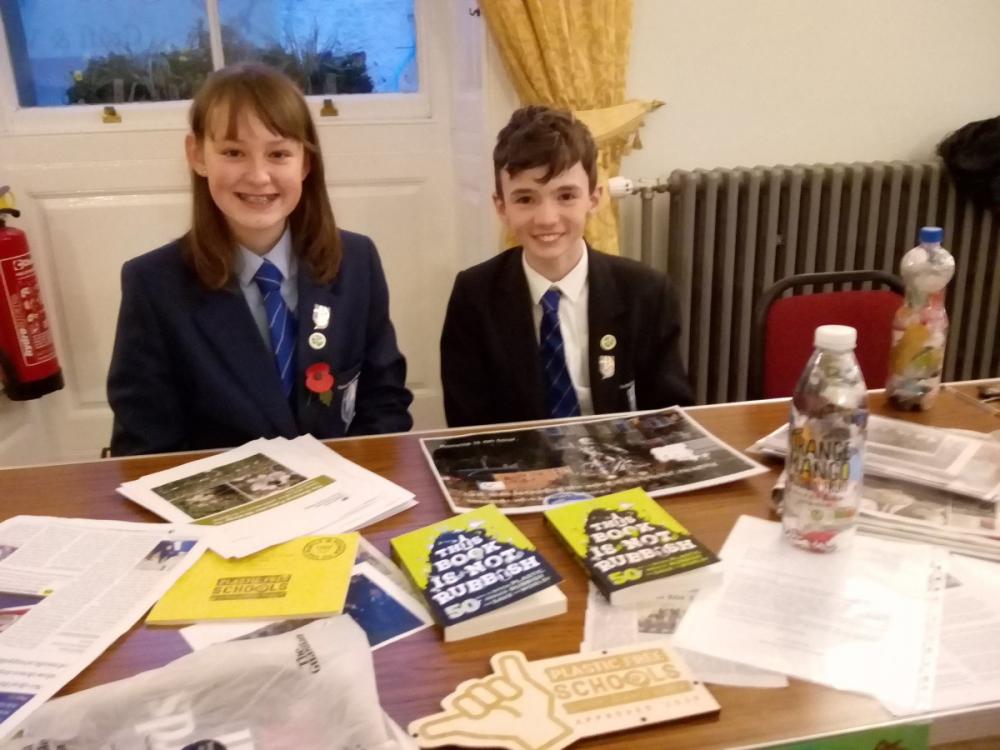 For more information go to https://letsgozero.org/