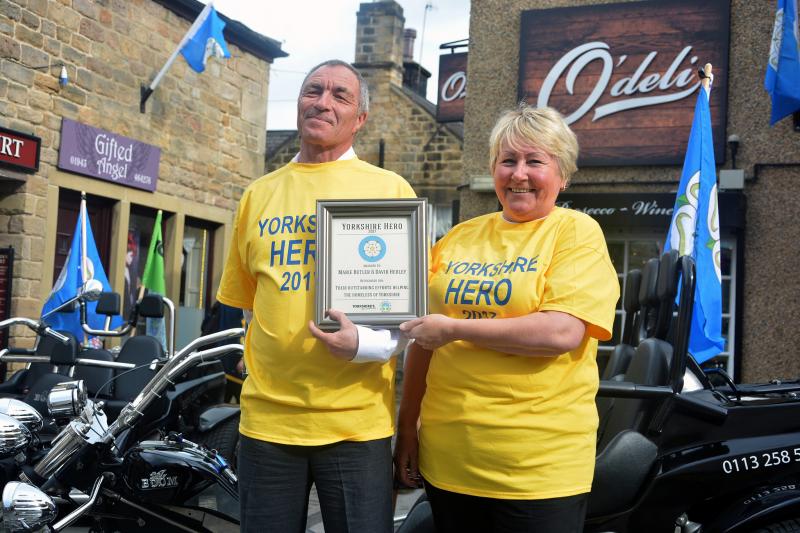 Marie Butler and David Hedley. Proper Yorkshire heroes
A man and a woman who set up a Facebook page to help coordinate support for the homeless in Leeds were today, Yorkshire Day, co-named Yorkshire Hero 2017.

Marie Butler, 50, and David Hedley, 51, set up Homeless Leeds Support Group Yorkshire in the winter of 2015 after David posted about a homeless man he had seen on his way to work.

The pair held their first soup kitchen on the steps of Leeds Town Hall on Christmas Day 2015, and the group has grown to include support from dozens of volunteers and a number of businesses, including supermarket Morrissons and bakers Greggs.

The group, which provides regular soup kitchens and supplies clothing and sleeping bags to the city's homeless, has been so successful it has now expanded to neighbouring towns and cities including York, Bradford, Doncaster, Rotherham and Wakefield.

Marie said: "We are absolutely honoured to win this award - it is totally unexpected and a thrill to be chosen over many other deserving causes as Yorkshire Heroes for 2017."

David said: "We accept this award on behalf of all the volunteers who help us help others. Without their fantastic support, and donations from the public and companies, we would not be able to provide the help we do."

The pair were nominated for the award by group volunteer Hughie Subham who said: "What the pair of them do is truly amazing. Everything is purely voluntary and they receive no official funding. I am so pleased that they were chosen as Yorkshire Heroes as they deserve recognition for all their hard work in helping people less fortunate than them.

Following a Facebook campaign that received more than 12,000 interactions, some 40 Yorkshire Hero nominations were made by the public, with David and Maria being chosen by a judging panel including Sir Gary Verity of Welcome to Yorkshire, Lyndsey Thomas of Yorkshire's Best Adventures and Jason Richards of Yorkshire Trike Tours.

Sir Gary Verity said: "I can think of no better way to celebrate everything that is good about Yorkshire on Yorkshire Day than chairing the panel that chose Maria and David as our winners. Their selfless acts in support of the homeless in Leeds, which have now spread to other areas of the county, are truly inspirational. Maria and David really are true Yorkshire Heroes."

Maria and David found about their award in true Surprise Surprise fashion when they visited the West Yorkshire market town of Otley today believing they were arriving to accept a large donation for the cause. Instead, they were whisked away on the back of a Yorkshire Trike Tours motorised Boom Trike for a luxury tour of the Yorkshire Dales following the same route as Tour de France riders took on Day One of 2014's Grand Depart.

After a 9am start in Otley, the pair visited Skipton, Kettlewell, Bainbridge, Middleham and Harrogate. A particular highlight was summiting the famed Buttertubs Pass between Hawes and Swaledale - one of the 'King of the Mountains' stages at the Tour de France.