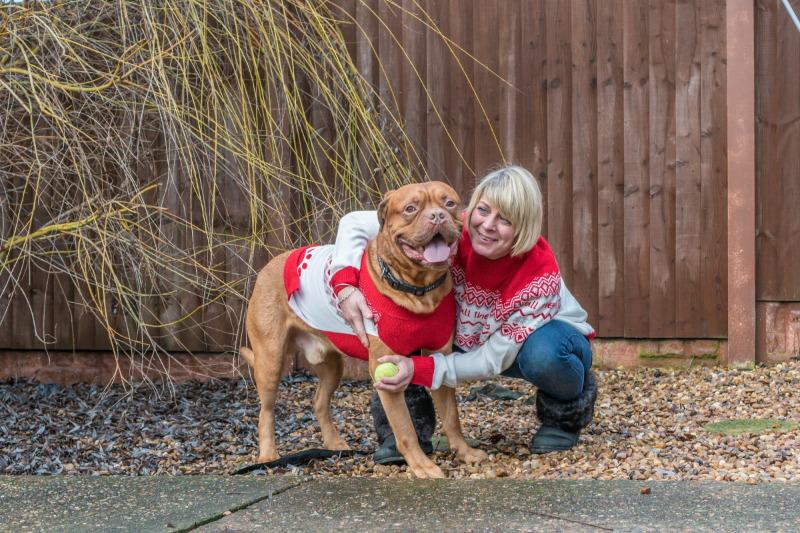 Lisa Reedman and Saracen
Following Aldi’s nationwide search for the UK’s most twinning pet and owner twosome last month, Lisa Reedman from Rotherham has been judged to be one of the five most identical pairs in the country.

Aldi’s ‘Pet-Alike’ competition was launched in November to celebrate the return of the supermarket’s matching pet and human Christmas jumpers.

The lookalike was chosen having submitted a photograph to showcase the uncanny resemblance between him/herself and his/her furry companion. Lisa and her dog Saracen will receive a matching pair of Aldi Christmas jumpers, with a winner to be announced later this month.

Lisa Reedman says:
“We’ve always received comments on our striking similarities and we’re so thrilled to be nationally recognised for this! On behalf of myself and Saracen would like to thank Aldi and the team.”

Julie Ashfield, Managing Director of Buying at Aldi UK comments:
“It’s no secret that we’re a nation of animal lovers and we wanted to make sure nobody, pet or human, was left out this Christmas! We’ve scoured the country for the best Pet-Alike and we’re delighted with the results – I think you’ll agree that the resemblance is re-bark-able!”

Aldi’s matching jumpers were available in store and online as part of the supermarket’s Novelty Christmas range, with something suited for every member of the family this festive season!