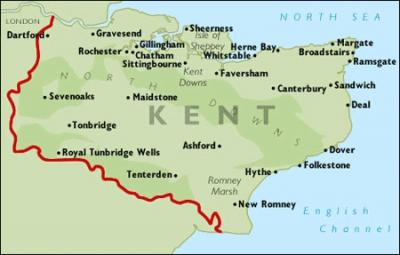 High-flying Yorkshire teachers are to be targeted by a new Facebook campaign encouraging them to relocate to Kent, especially the east of the county.

Kent County Council have identified Yorkshire as key to its drive to recruit experienced teachers to work in the South-Eastern county and have tasked recruitment specialists TMP Worldwide with the job of helping them fill many vacant teaching posts in their teaching staff.

Yorkshire is home to a number of high performing non-independent schools, including Ermysted's Grammar School and Heckmondwike Grammar, among others - and now Kent County Council wants their teaching staff to think about moving down south to the 'Garden of England'.

The campaign, dubbed 'Your Perfect Kent Day' will begin on Facebook with teachers being asked to post their idea of a 'Perfect Kent Day' on a specially designed page. Other Facebook users will then be asked to 'Like' each idea and the one with the most 'Likes' wins a trip to Kent.

The trip winners will record a film about their experiences, with footage then edited into a short YouTube film and used for online video adverts. The winners will also be asked to help promote the appeals of Kent as a place in which to live and teach.

With the largest education department in the UK, at just over 14,000 teachers, responsible for 300,000 students across 600 schools, Kent County Council is hoping to attract experienced educators such as male and head teachers, as well as specialists in art, languages, English, maths, chemistry and biology.

Leadership posts are also on offer, with 251 advertised last year alone through the county, and with a large number of head teachers approaching retirement, this figure is expected to grow still further.

However though Kent are actively encouraging teachers from across the primary and secondary educational spectrum to apply for their posts, they concede that the usual gender disparities in primary teaching staff exist in the county, with 16,190 female staff members in Kent primary schools, compared with just 1,521 men.

Meanwhile Kent's recruiters hope their positive message will spark a boom in teacher recruitment from outside their county.

Andrew Wilkinson, chief executive at TMP Worldwide, said: 'We want qualified teachers from all over the UK to consider the benefits of re-locating to Kent. The Garden of England offers career progression and a variety of opportunities from working at smaller village primaries to diverse urban secondary schools.'

The campaign also aims to highlight the many benefits for experienced teachers of a relocation from Yorkshire to Kent in a continued career progression and the buzz of the nation's capital on its doorstep. Kent offers a cheaper cost of living than London, but within driving distance of the city, they point out.

As Samantha Vandersteen, recruitment marketing officer at Kent County Council puts it: 'We're breaking the mould with this campaign. Instead of going to market with a tired message placed on overused ad platforms, we're trying something new, to give people a real glimpse of what their life could be like in Kent.'

'We want teachers to imagine living and working in Kent, and then turn the dream into a reality.'