You And Me In Paradise: Trouble - Grist Anthology Of Protest Short Stories 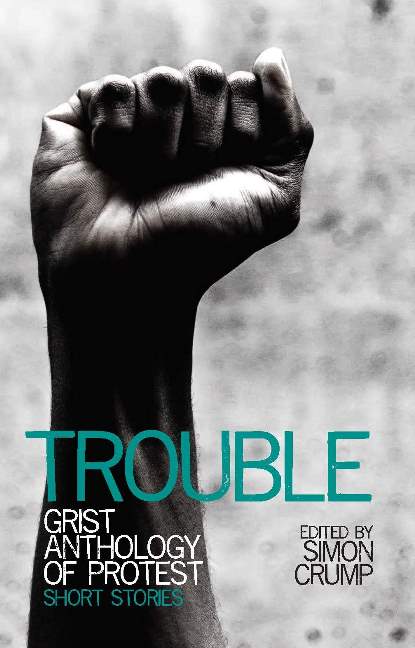 Clearly not disposed to thinking laterally, I remember making a contribution to a university project on the subject of ‘Conflict’ with a presentation about war. It was in hindsight, and with a gentle nudge from the presiding lecturer, that a conspicuous truth emerged: there are issues of contemporary resonance at least as pressing as the retreat from Dunkirk or Saigon. Try domestic abuse, homophobia, institutionalised racism and sexism, whose victims also wear the outward, and inward, scars of conflict.

And one of the many virtues of this worthy addition to the University of Huddersfield’s Grist series of anthologies, is the sheer breadth of voice and diversity of left-field thinking in engagement with the complex landscape of human friction. Including, lest we should forget, the depressingly persuasive retaliatory schadenfreude of Russians caught in the maelstrom of the Allied bombing raids in the Ruhr of May, 1943 (‘Nachthexan’ by Jim Lewis). Skilfully curated by Simon Crump and perspicaciously judged by three leading literary exponents – Kim Moore, Helen Mort and Adelle Stripe - the latest collection is in sure hands. The wealth of short stories in Trouble, submitted by both professional writers and current students, shake the snow globe and displace some common thematic locators whilst occluding others. The result, taken in the round, is deeply relevant and entirely absorbing.

Female suffrage distilled to an act of protest before the hurtling horses of Epsom in 1913, Mary Fox’s raw depiction of Emily Davison’s final hours in ‘The Flag’ indulges the reader’s sense of inevitability with a denouement symbolically re-enacted in every subsequent struggle for women’s liberty and parity. Fox understands the power of symbolic commemoration: her faithful rendering of an era – its purlieus and crannies – gives gravitas to a profound sense of moment.

Similarly, Yeats’ ‘terrible beauty’ is augured as though fresh in mind in Miriam Burke’s dialogue-driven lead in to another seminal historical moment (‘Happy Harpies’). Her knowledge of the events of 1916 in Dublin drives her narrative, which is as inexorably controlled in its composure as the re-imagined figure of Helena Molony, haring across town to the GPO on O’Connell St. on a mission of nothing less than existential duty. This is fine, anticipatory writing which racks up tension against a burgeoning backdrop of unfolding history, as it provides a needful service to the memory of those strong women who helped to engineer cataclysmic changes to the Irish landscape.

The script, for Burke, is one stage in a continuum of re-rehearsal. As, in a radically different way, is Bex O’Gorman’s arresting story of Hermaphroditism, ‘Meet, me’, whose narrator’s mental damage, occasioned by a selfishly destructive mother’s misunderstanding, and revealed in clever backward glances and temporal dislocations, is clinically, and brutally, revisited on an innocent. O’Gorman’s claustrophobic final scenes – the drugging of a date before surgical ‘re-gendering’ is attempted – are harrowing in the extreme, as the protagonist/victim is driven to mete out an inverted form of ‘justice’ according to the retaliatory tenets of Lex talionis.

O’Gorman’s unusual take on the profoundly understated word ‘trouble’ helps to underline a telling editorial point in this precisely balanced volume: abuse and victimisation are no less pressing if they are socially and culturally marginalised. Jonathan Holland’s ingenious structural approach – his third person narrative uses the naive argot of his child protagonist – opens on to the life of a septuagenarian Polish vagrant, without adult preconception. As Mr Sienkiewicz’s history is uncertainly revealed, a door to understanding, which would otherwise remain prejudicially shut, is opened. Edward begins to see beyond the ‘potent-smelling mystery, wrapped in rags’ - to a world of energy and optimism in the shipyards of Gdansk, in the hopeful time of Lech Walesa.

Or A.B.G. Murray’s succinct vignette – a thinly-disguised polemic excoriating Sheffield Council’s absurd tree-lopping policy - whose fizzing metaphors in ‘A Haunting’ illuminate an arborial resilience which will outlive the pragmatic short-termism of councillors. ‘We simply replace them’, Murray says of the latter, ‘with a newer crop’.

As much a part of our collective history as the subjugated and mostly silenced Victorian working classes, the minorities whose presence in these islands are as incalculably enriching as they remain the subject of institutional levels of abuse, are judiciously represented here. The several short stories whose wildly disparate angles of entry act, in fact, to reflect that troubled history, range from an elegant nineteenth century narrative of festering resentment, peaceful resistance and epiphany during the Raj (‘You will be free one day, my dearest India’ by Sarah Hussain), to the appalling injustice dispensed to a couple of different race (‘The Only Language She Didn’t Understand’ by Robert Kibble), to a forensically raw depiction of a snarling, tense Brixton in a sustained and brilliant piece of writing whose inventories of visual detail are a precise corollary to prevailing mood. Martin Nathan’s ‘The Most Dangerous Woman’ infuses paranoia, anxiety and metropolitan isolation into an achingly terse description of a shop on the Railton Road:

The shop bell dings and the ghost of an old man travels behind the protective layer... between the shelves and the wire mesh armoured with Makrolon. He follows my finger, ignoring my words. ‘Orange. Six.’ Six fingers raised. He drops them in a bag. Takes my money. I ask for my change, but he’s gone.


Also by Steve Whitaker...
Poem Of The Week: 'Snowdrop' By Ted Hughes'To Travel Hopefully' : Stations Of The Mind'Thick Like Cream; Perfect Like An Egg': Beneath The Trees Of Eden By Tim BindingInto the Light: Sheaf (Digital) Poetry Festival 2020Poem Of The Week: 'Night Rain' By Edward Lucie-Smith
Heartening to see so much of ingenious value, such a profound urge to communicate, in a collection about the causes and material consequences of conflict. I found myself returning over and over to Martin Nathan’s other contribution to this anthology – the heavily ironic ‘You and Me in Paradise’ – which yields a refreshingly vital take on a landscape we think we recognise, but is coolly re-calibrated to uncover abuse piece by pristinely-tiled piece. The facade – a stupendously-appointed hotel somewhere in the oil-rich Middle East; the dramatis personae – ‘air-people’ in Amis’ sense, visitant, watchful travellers who need not leave the studiously anodyne corridors and spacious air-conditioned rooms for an ‘outside’ which burns. Nathan’s laconic, metaphor-rich descriptions are a joy to savour, as the labyrinthine impersonality of the hotel’s interior and programmatic staff are counterpointed with the revelation of the many behind the scenes drudges who build and facilitate these palaces of money. The one scrap of organic relief, beyond the curious visitor, Mark, is the deracinated Keralan, Arshad, who is paid peanuts to minister a delusional sense of European order to hotel guests. The latter’s story – ‘the story of Arshad Kamal’ – is vouchsafed only in the narrative’s final frames:

In the distance Mark heard another sound in harmony with him, a tapping, a beating of a drum, in the same insistent rhythm. An Indian flute. Finger cymbals. He breathed hot, dirty air and felt the approach of a marching band in the dazzle of sunlight.

And it is in Arshad’s vibrant story of home that we recognise the barely noticed victims in this post-colonial landscape: the many Asian ex-patriates who oil the machinery of Emirate and Saudi building programmes, and labour, sometimes unto death, in the hot afternoons of former deserts for a pittance.

Trouble is a fitting testament to those who are obliged to endure in hardship, and mostly exist outside of our general cognition.

Trouble – Grist Anthology of Protest Short Stories is published by the University of Huddersfield Press.