‘You Need All The Luck You Can Get’: A North Sea Tale By Chris Speck 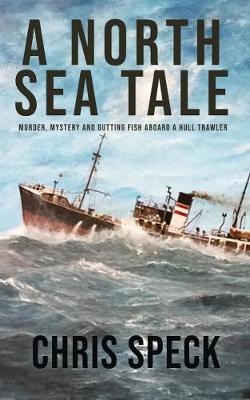 I well remember my hometown of Sunderland, the long rows of terraced cottages where the miners and the shipyard workers lived. Although some might have viewed it as nosiness, a sense of community in the streets prevailed as families looked out for each other, the potential for tragedy ever present. Yet, there never was a truer statement than ‘you don’t know what goes on behind closed doors’. Appearances were everything.

The opening of Chris Speck’s new novel takes me back to an earlier time. Set in the docklands around Hull, with its streets of polished steps and often shadowy back alleys, there is a grim reality apparent on the page as we cringe with a teenage Danny Green, cowering beneath his father’s fists - which are meant to teach him right from wrong.

I have long believed, too, that the job of a trawlerman is one of the hardest, reliant as it is on the whim and caprice of the sea, as the boat rolls on the waves, danger omnipresent and with no guarantee of reward. It’s a tough life and Chris Speck describes it in authentic terms, creating a necessary brotherhood among the crew. Coming from East Hull, Speck has used his local connections to create a believable drama.

Set on a fishing trawler in the North Sea in 1975, at the height of the Cod Wars and with the Russian threat lurking, the two main characters steer the reader through the novel’s twists and turns. The skipper of the Cuckoo, Richard Bird, becomes something of a father figure to Danny, the young ‘deckie learner’ who knows nothing about trawlers but needs to get away from home. As things are explained to Danny, so the reader is afforded a window on this dangerous new world of experience.

Threatened with yet another beating (‘for his own sake’), Danny walks out of the house, one Sunday morning, and goes down to the docks, trying to put off what he knows is inevitable. Almost without a thought, he finds himself on board The Cuckoo, as the latest deckhand, under the auspices of the ‘best skipper’ on the high seas, Richard ‘Dickie’ Bird, who desperately needs a good catch this voyage, and is shorthanded.


Chris Speck
The trouble begins when a serious lack of fuel makes the trawler too light on the water. Someone’s mistake! They need to take on diesel and fast, despite the fact it will be a costly delay.The tension is palpable as they steer the flimsy boat into the mouth of the Tees, without a Pilot, struggling to keep her upright in the turbulent waters. And that is just the start.

While I won’t cross someone on the stairs or walk under a ladder, the list of superstitions on board the trawler is seemingly endless, and it’s for good reason that Danny is relieved that they don’t know his surname as he quickly learns the life of a trawlerman: you sleep in turns, eat fish for every meal, mend nets, gut and pack fish for hours with swollen, frozen hands and survive the swell and what it does to your stomach. Battling the elements, the naïve and inexperienced Danny is for a moment ‘man overboard’ but the sea knows its own mind and throws him back again. His luck is in – this time.


Also by Artis-Ann ...
Review: Expectation by Anna HopeReview: Death In The Cotswolds By Rebecca TopeIntricate Layers: Eight Detectives By Alex PavesiOn The Road Again: Breathing Lessons By Anne TylerReview: The Hidden Hours By Sara Foster
There’s an ill wind on this trip – they can all feel it - and they know it only takes ‘one flick of the sea dragon’s tail’ for disaster to strike. In this case, however, another hand is at work. Just when they think they have sailed into calmer waters, satisfied with a full haul of fish, chapter thirteen - unlucky for some - alters their course once more. Whoever said, ‘Apart from the dead bosun, this has been a good trip,’ needs to think again.

The rest of the crew is a motley lot and Speck draws his characters in detail.There’s Boris, who they all know is on his last trip; the reliable Sparky and the quick witted Simo; Paul and Mike Heather, brothers who are tough fighters but who are also more understanding than you might give them credit for; Vicky, the chef, aspires to his own French bistro; Greasy Joe is the Chief Engineer with his assistant, the Rat, who looks on Danny as being someone he at last can bully; Bosun, whom they all hate and Dworkin, the Geordie with a limp who rarely pulls his weight but makes his presence felt. Lurking, is the Bull, a fearsome Scot, and running around between them all, is Jim, the terrier. There are fractious interludes with rough humour, but despite Sparky’s warning to Danny that the crew are not his mates, a camaraderie and understanding develops, especially when the need is greatest.

This is a highly engaging read: drama, tension, friendship and humour all combine in a realistic tale which I, for one, thoroughly enjoyed.


A North Sea Tale is published by Flat City Press