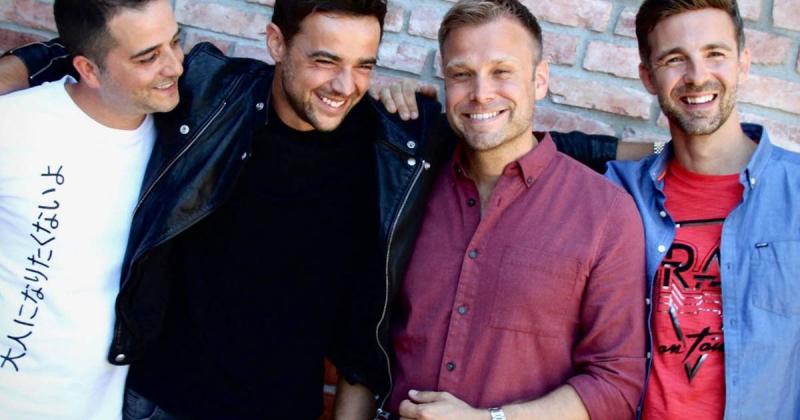 a1
Twenty years has disappeared since a1 stormed into the charts with the irrepressibly irresistible anthem Be The First To Believe. By 2002 they had released 3 studio albums, scoring numerous Top 10 hits and winning awards all around the world. However, life on the road took its toll and shortly after the release of their most impressive album, Make It Good, the band disbanded in the aftermath of Paul Marazzi leaving the band. Although they reformed back in 2009 as a three piece, with their new sound marketed solely at the Scandinavian audiences, they were thrust back into the British spotlight in 2014 as part of The Big Reunion. While they enjoyed being back on the road in the UK, their personal journey back to their original line-up was finally fulfilled last year when Paul rejoined the fold.

With the band heading out on the road with three of their fellow The Big Reunion bands - Damage, 5ive and 911 - we caught up with Mark Read to find out what the four piece have in store.

Hi, how are you feeling about being a quartet again? What prompted the decision to reunite? You have all aired thoughts on why it hadn't worked for The Big Reunion, do you all feel ready to move on?

It's great to be back together with the original line-up, I'll be honest I didn't think it would happen. I think a lot of people didn't think it would happen, because we did the The Big Reunion in 2012 and Paul didn't have any interest in doing it, so myself, Ben and Christian took part. We actually got back together quite organically in the end, we had a gig up in Newcastle and we met up with Paul who lived nearby, we hadn't seen each other in fourteen years and we got on so well and Paul said he'd love to do some gigs with us and our first comeback gig was to 4000 people in Singapore - it was a great way to come back.

Would you consider a documentary to update your fanbase on where the band are now?

It's quite the trend now, because of channels like Netflix and a lot of bands are doing it. The Jonas Brothers have just released another one. We have talked about it but, we need a good angle. A film maker wants an angle and not just a happy film and with the four us at the moment we are all happy. I'm not sure a documentary about four men having a good time on the road is great TV viewing. But we are looking at it.

You have already revealed the single Armour - can you tell us about the writing and recording process.

Armour was the first song myself, Christian and Ben got back together to record, but just recently in Norway the four us went in the studio and it is the first time we've written a song as a four-piece in 15 years and it worked really well. We wrote for songs for a new album that we are really with.

Yes, nowadays we give each space when we are writing music as you can imagine four people writing in one room can be difficult and there is a lot of ideas flying around.

Can we expect a new album at any time soon?

Yes, we are recording our sixth studio album and our fourth with Paul, which will be released around Easter next year.

You are headed out on your reunion tour later this year, what do you have planned for the shows?

Our tour in November will be full on hour and half show with all the hits and some new songs thrown in and a much more interactive experience with our fans.

We are often asked to do multi-band tours, sometimes it doesn't make sense and sometimes it does. The experience we had touring with the other bands on the Big Reunion tour was a manic experience because there was too many bands on the road together, however The Boys are Back Tour in particular sounded right because we're great friends with 5ive, 911 and Damage. They are a good bunch of guys.

What are you most excited about for the tour?

Just getting out and seeing the fans, and visiting parts of the UK that we haven't toured in for a while.

Can we expect any cross-band mash-ups as per the NKOTBSB tour?

No idea what the band would be called, we are looking at that, but the band name would be far too long.

Lastly, if you could have recorded one of the songs by the other three bands, which one would it have been?

I think it would be Forever by Damage - It's just a really lovely ballad.