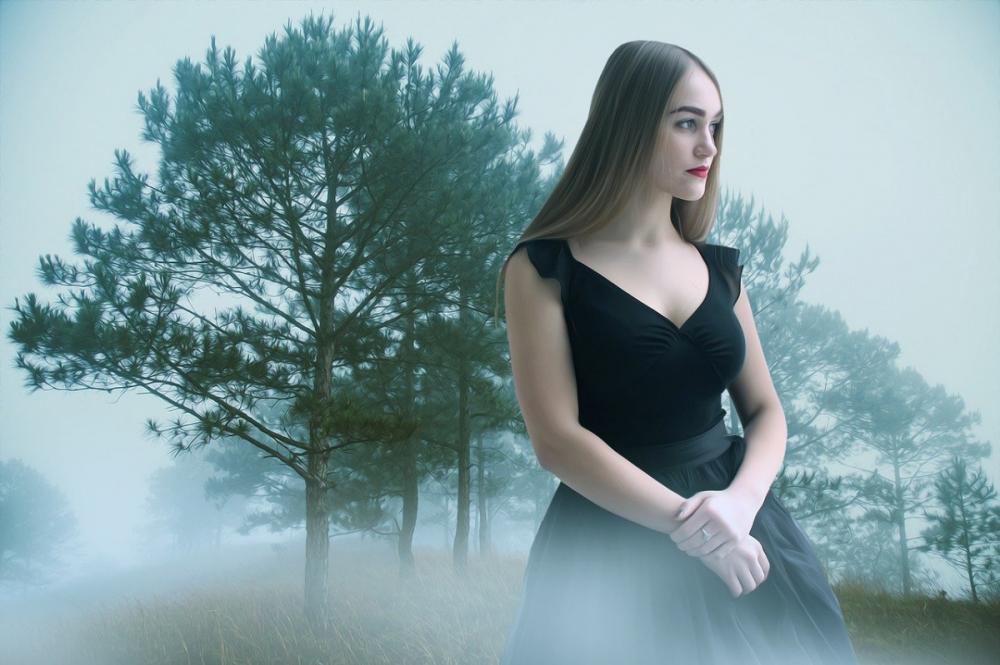 It was a crisp bright day when I set out. The leaves were on the turn, and light was dappling through the gaps where some had fallen. I was glad when my car started straight away, and by the time I’d checked my map – I preferred maps to sat.nav. – some heat had started to come through.

It was about fifty miles, by my reckoning. I’d spent a long time last night wondering why I was doing this, and I honestly didn’t know. I normally don’t act on a whim, but weigh up the pros and cons of my actions carefully. This had been different. I’d been leafing through the magazine in the dentist’s waiting room, deciding if I liked any of the houses featured, and decrying, as usual, the lack of books or televisions in any of the rooms featured. Who were these people, and how did they pass their time? I read the blurb :

‘Annabelle’s home is an eighteenth century cottage with later additions, and eight bedrooms. She lives here with her husband Rupert, who is a stockbroker, and their three children, Tarquin (18), Poppea (16), and Tobias (10), cockapoo Stanley, Alfonso the cat, and two hens, Elsie and Mabel. Annabelle owns ‘Tat for New’, an interior design business, specialising in vintage and retro homewares.’

I ask you, are any of these people real?

I wished I could show this to my friend Annie, so we could have a good laugh.

Then I turned the page. I was looking at an old half-timbered house, and I was overcome by a kind of déjà-vu, as though I knew the house well. It drew me, that’s all I can say. The accompanying copy said it was in Netherfield, Warwickshire, and owned by a retired couple, Jennifer and Henry, who lived there with their black Labrador Sam. There was no actual address, but there was an inset piece saying where they liked to shop, and to go for a meal.

Surreptitiously I tore the pages out, and shoved them in my bag.

That evening I pored over them. The feeling I’d had about the house hadn’t gone away; if anything, it was stronger. Somehow I had to find where the house was, and to go there. I checked my diary, and decided I could manage the 31st, if I just re-arranged one appointment. That would be in three days’ time.

So there I was, driving to Warwickshire. I’d googled the pub, where ‘Jennifer and Henry’ went to eat, and decided that would be where I began my search.

It wasn’t too hard to find. It was a black-and-white half-timbered inn, on the main street of a largish village. Most of the shops and houses in the street looked as though they came from the same period, and there was an atmosphere of prosperity. It felt like stepping back in time. Outside the butcher’s shop stood an old-fashioned black bicycle, with an over-large basket at the front, and a placard which read ‘Bloodworth and Son, quality purveyors of meat since 1901.’

Everything was a contrast to the area where I lived, a somewhat characterless London suburb, where meat was bought in supermarkets, wrapped in plastic. Nevertheless I had a sense of home-coming here, which seemed odder by the minute.

I strolled up and down the street, and back to my car, which I’d left parked by the kerb. There didn’t seem to be any parking restrictions.

It was nearly one o’clock, and I was hungry. I went into the inn. Inside was dim, after the bright day. There was a lot of dark wood, and a longcase clock ticking slowly and loudly. No-one was in sight, but I could see a sign saying ‘Restaurant’, so went in. It was a lighter room, looking out onto a garden at the back, which would have been a lovely place to sit, had it been warmer: but this was the end of October, after all.

A pleasant young man, who I later found out to be Portuguese, from Madeira, brought me a menu.

Unaccountably I had begun to feel nervous. I settled for soup and a roll, and a glass of elderflower pressé. The soup was vegetable, and very good. Apart from me, the room was empty.

When the waiter came to take away my soup bowl I struck up a conversation, asking him where he came from, did he like it here, did he intend to stay long, and so on. I told him I’d been to various places on the Portuguese mainland, but not to Madeira, and we had a chat about Lisbon. I then launched into my cover story, that I was trying to track down some old friends of my parents, Jennifer and Henry. They’d somehow lost touch, but my mother had seen the article about their house in ‘Upmarket Homes’ magazine, and had asked me to try to find them. A brighter or less naïve chap would have been suspicious and seen through this flimsy tale at once, but not my waiter.

“Ah yes. They live at the Manor House. It is about half a kilometre from here, down the left road at the village fork.” I worked out what he meant, thanked him, and gave him a large tip when I left.

The weather had deteriorated whilst I was having lunch. Dark clouds were rolling in, and the trees along the street were buffeted by the wind. Leaves swirled down from the branches, and the temperature had dropped by a good few degrees. I was glad of my warm coat, and the gloves I always wore when I was driving.

On a whim, I crossed the road to the General Stores, which had flowers outside in buckets, and bought a bunch of chrysanthemums. As I was getting into my car, my waiter, probably finished for the day, came past. “Madam, those flowers are unlucky,” he said. I must have looked sceptical, for he went on, “They are the flowers of the dead.”

What superstitious nonsense. I drove off slowly, thinking what a charming place this village was, and the sense of homecoming I’d felt. I was not going to let some primitive superstition spoil that.

The house was easy enough to find. There was a lay-by on the right, with big gates set in the middle, and a sign saying ‘The Manor’. I pulled into the layby and switched off the engine. What on earth did I think I was doing?

Why had I come?

I felt to be acting under some sort of compulsion I didn’t understand. I took out my notebook and pen and began to write. What you’re reading here is what I’ve just written- though I don’t suppose anyone will ever read it, as it is just too pointless and silly. What should I do now? Just turn around and drive home? I've come this far, so I’ll carry on, go up to the house, give them the flowers, and make up some reason for being here.

Here I am, back in the car. I have never been so shaken, indeed scared, in all my life. This is what happened.

Huddled in my coat, head down, I walked up a tree-lined drive. The wind was howling now, and there was an ominous feel in the air that comes before a storm. Gravel crunched under my feet, and I struggled to stand upright. There was a bend in the drive, and the house came into view. It stood dark and foreboding against a purple sky. Moved by a kind of compulsion, I reached the large, studded front door. There was an old-fashioned bell-pull at one side, so I pulled it. My heart was thumping, and part of me wanted to turn round and run away, but I was rooted. I couldn’t move.


Also by Kaye McGann...
Welcome To Your Local Pub!The Morning AfterMy Friend RosemaryNo Fool Like A Young FoolFriday Night Is Amami Night
After what seemed an inordinate time, the door was opened, giving a glimpse of linen-fold panelling and a bright rug, perhaps Turkish, on a polished wooden floor. In front of me stood a teenaged girl. She looked at me with a kind of horror, then turned and ran back into the house, calling, “Gran! Granny!” I must be looking a mess, I thought, with my hair blown about by the wind – but surely not so bad as to frighten someone!

I heard a door open inside, and somewhere a dog was barking. An older woman came walking towards me. I recognised her at once, Jennifer, from the picture in ‘Upmarket Homes’. She was slim and elegant, the sort of person who always looks well-dressed in any circumstances. She came towards me very slowly, and I could see the girl hovering behind her. She didn’t speak.

“Hello,” I managed to stammer. “I’m so sorry to trouble you. I saw the feature about you in ‘Upmarket’, and had this weird feeling about your house. It sounds silly, really. I felt I had to come and find it, I mean find you.” I was gabbling. Still she didn’t speak.

“I’ve driven down from London,” I said. I paused. Still she said nothing, just looked at me. “I wonder if I could step inside ? Just for a minute? It’s starting to rain.”

“I mean it is not a good idea, under the circumstances,” Jennifer answered.

“I’m terribly sorry. I didn’t think this through. It’s obviously inconvenient for you,” I said.

“Oh, it isn’t that. It’s just that the house is haunted.”

I almost laughed. “That’s OK. I don’t believe in ghosts,” I said.

She didn’t smile, just looked at me. “You should,” she said. “It is haunted by you.”

Have you heard the expression, ‘my blood ran cold’ ? That’s what it did. I just stood there, my mouth open to speak, but no sound came. I backed away, down the steps, and almost ran down the drive back to my car – which is where I am now. I don’t know what to make of it. There are no such things as ghosts. How could a place be haunted by someone who’s alive anyway? It doesn’t make sense.

But then there’s this awful dread I feel. Why did seeing this house in a magazine have such a profound effect on me? What compelled me to drive all the way from London to try to find it? What on earth did I think would happen when I got here?

Well, I’m here now, in the car, thinking I can’t just leave it like this. I need to know more. I’m going to go back and I shall refuse to leave until Jennifer has been more explicit. She must see I need to know. I’ll take the flowers for her; I forgot them last time. When I get back to the car I’ll continue writing this, and by then I hope to have some answers. There’s a storm lashing now, but I don’t care if I get wet. I need to know.

Article in the local ‘Gazette and Advertiser’, November 5th

‘One of the worst storms for many years lashed the area on October 31st. The worst-hit place was the village of Netherfield, where numerous trees were brought down by the force of the wind, including a two-hundred year old oak on the High Street, killing a Portuguese waiter from the Dragon Inn.

‘Tragedy hit the Manor House on the edge of the village as well, when another oak of similar age crashed down on a woman who it seems was walking up the drive there, killing her outright. The owners of the Manor, Mr. and Mrs. Henry Jameson, disclaimed all knowledge of the woman, saying they had no idea why she was walking to their house. Her bag has not yet been located, but a bunch of chrysanthemums was found at the scene.’