I don't have soup as a starter anymore. 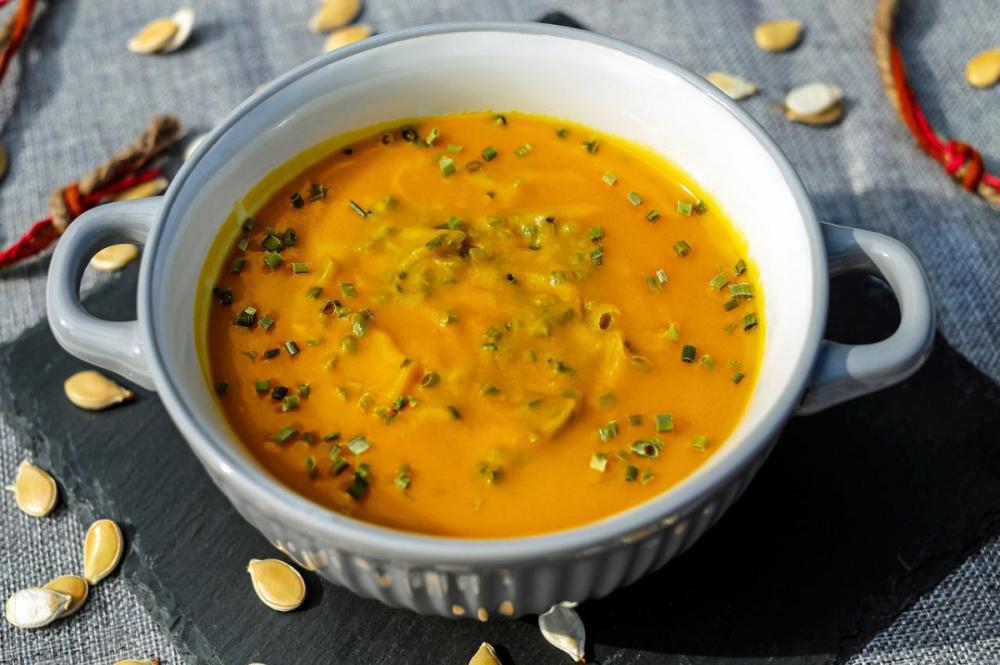 You wouldn't notice Muriel if you passed her in the street. She was no femme fatale, no glamour model, just an ordinary woman. Her age was indeterminate, but probably somewhere in her forties. To us who worked in the office she was a motherly figure - even to those who were probably a good bit older than her.

The office depended on Muriel. She was almost certainly the poorest paid of us all, yet she was somehow the lynch pin, the hub around which everything else circulated.

Muriel was cook, something and bottle washer - I can't remember the exact phrase. She was always there when the rest of us arrived in the morning, and she was usually the last one to leave at night. When the rest of us arrived the place was bright and clean, everything polished and shiny. There can't have been another office anywhere that was so clean, so congenial to work in.

But her duties were not just those of cleaner. By no means. At 10.30am and again at 3.00pm she would come round with her trolley with tea or coffee and biscuits. You didn't have to go and collect them - she came to each desk or office in turn and personally served us what we wanted.

From midday until 2.00pm she ran the office canteen, and probably did most of the cooking and all the clearing-up herself.

And beyond this she was somehow the source of all information. If something went missing she knew where to find it; if something had been forgotten, she remembered it; if someone was away, she knew why; and if you needed a shoulder to cry on, she provided it. There were quite literally occasions when she supplied such a shoulder to those whose romances had broken up or who had sickness or worries at home - and it was not only the women who came to her for comfort.

In short, she was all things to all people. Without her I don't think we would have functioned properly at all.

I say that she came in early and left late. It was most noticeable, and not really necessary. As the day progressed and the time to go home got nearer she seemed to become somehow a little afraid. You couldn't define it, but there was something noticeable about it. When Friday came and the rest of us were looking forward to a night out and a weekend away from work she seemed to become not elated but depressed.

And then we began to guess at the possible cause. One morning she appeared with a black eye, and on another occasion a severely swollen cheek. She explained these injuries as caused by her clumsiness and her not looking where she was going. Once she had walked into a door. On another occasion she had banged her face against a cupboard that she had forgotten to shut. We knew these to be excuses, and doubtless she knew that we knew. For Muriel was never clumsy at work, always looked where she was going, never had any kind of accident.

Then things got worse, for one morning when we arrived Muriel was there before us as usual, but with her left arm in a sling.

Another time as she walked she was evidently in considerable pain - so much so that I phoned Health and Safety and asked for a nurse to come down. She took Muriel into a private office and examined her. She later told me, in confidence, that Muriel was covered in bruises. She refused to go to hospital, and so the nurse had given her some pain killers.

We all loved Muriel. We guessed what the problem was - a violent husband. But she never said anything.

One evening I had stayed later at the office. As I as preparing to leave I looked out of the window and saw that it was raining heavily. As Muriel was also ready to leave I offered her a lift. He home was not much out of my way so it was no inconvenience for me. She normally came and left work either by bus or, sometimes, walking.At first she was reluctant to accept my offer, but then agreed, but when we came to her street she insisted that I should not drive right up to her door but rather drop her off at the end of her road. I did so, and before I drove on I noticed that she did not walk straight home but went to shelter in the entrance way to a corner shop. Was it that her husband would have been suspicious at her earlier than usual return home?

One Monday morning when the rest of us arrived at work Muriel, who had been there for over an hour already, announced that her husband had disappeared. It seemed that he had walked out of the house and not returned. As the days and then weeks passed he had not come back. Muriel no longer became depressed as a weekend approached, no longer showed signs of being the victim of violence. But in all other ways she remained "our Muriel", the centre of our office community. All the things she had done for us she continued to do, and she seemed much happier.

One evening when I was again working late I offered Muriel a lift home again. This time she accepted without hesitation. As I drew up outside her house she asked if I would like to come in for a bite of supper. (I think she may have heard me tell a colleague earlier in the day that I would be returning to an empty house as my wife would be away for a few days. Her mother had been taken ill, and although it was not too serious, she knew that her father was hopeless in any kind of crises, and so felt she needed to go down there for a day or two. )

I accepted the offer of supper willingly. I knew what a good cook Muriel was - and it would certainly be better than a cheese sandwich or some such delight as I might get for myself. I had never been in her house before but, as I would have expected, it was spotlessly clean and yet homely. She said she usually ate in the kitchen and invited me to sit at the table there. Then she began to heat up a pan of what looked to be delicious soup.

And so it proved to be - at first. A bowl whose thick, brown, steaming contents promised a welcome starter. I tucked in and it tasted good.

That is until I felt something in the soup with my spoon, something quite long.I guessed it might me a sausage, or a parsnip perhaps. But then my spoon struck something hard, metallic it seemed.I scooped it up - and began to wretch violently. For before me on the spoon I saw an index finger encircled by a gold wedding ring!

I ran from he house and, I am sorry to say, was sick over Muriel's rose patch in the front garden.

The following morning Muriel was in early as usual. She gave me what I thought was a knowing smile and I returned a somewhat sheepish grin.

I said nothing to anyone but the general view in the office now was that Muriel had, as one person said in reference to her husband, "done him in". None of us liked wife beaters, and we all loved Muriel. If any evidence of such a crime had emerged the general reaction would have been "Well done, Muriel!" , or "Good for you, Muriel!" Had anyone suggested reporting their suspicions to the police they would have been ostracised for life!