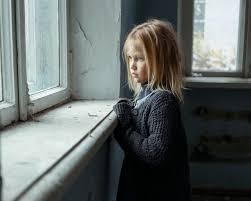 I once knew this girl. Small like a mouse she was … big eyes. And colourful ribbons; dancing kite ribbons in the playground. Red one day, blue the next and rainbow ribbons Friday. Didn’t say anything in the uniform rules about it; no mention of ribbons. Nothing I can remember about how far the socks must be up the shin. She always wore one half-mast. Always. I wondered how she managed it. Willpower, my Mam said.

Our family lived down a terraced street not that far from the school. The houses had seen better days; a time in the past when the port was thriving. Years of decline reflected in the conditions of the rows of back to back houses that characterised the place. As children we played games in the lanes that bound these rows together, and loved it for what it was.

This kid’s family had moved in at the end house; the biggest on our terrace. It dominated the street and had been empty for as long as I could remember. I was fascinated by it. Large and old and different, with funny patterned brickwork. I believed I could see people moving around inside … shadows from its past that couldn’t quite let go; memories from a more prosperous and happy time perhaps. They must be sad, I thought, at the state it was in.

For a while, the shadows disappeared to be replaced by a hairy grey cat that stared back at you from an attic window.

I wasn’t arguing. The rest of the back lane mafia, through experience or word of mouth, had got the message pretty quickly as well. They were wary in the presence of the scruffy new kid with the ribbons. There was a strangeness. The accepted rules were not being followed. There was no desire to conform or join in. She stood apart from the rest of us, unaffected by her isolation. A confidence was evident that was out of proportion with the size of this particular ten year old.

I wasn’t arguing, but I was curious.

The invitation came a month later, most unexpectedly, one green ribbon day in spring while I was walking back from school at the end of an awful afternoon. One moment I’m alone, the next I’m aware of mousy hair, green ribbons and a face with a question in it somewhere around my shoulder.

They made me nervous.

“You’d like Sacky. She’s dead friendly. She was a stray, but she’s got a home now. We’ve nearly had her a year ... She just likes us. Well, she likes me. And she really likes this place. Must be the mice.”

We stopped outside the big house.

“I’m having a party for Sacky. Sandwiches in our front room. You can come if you like.”

The big house stood before me, all brickwork and promise, with Sacky the cat, fat, grey and hairy, staring down.


Also by Jonathan Humble...
The Artist As Poet: Quest For Ions By BrowzanThe Dirigible Balloon: Preparing to Launch a New Webzine for Children’s PoetryDoggerel For The Discerning: 'Glad To Be A Dalek'Kendal Poetry Festival: Where To Next?Doggerel for the Discerning: 'A Happy Ending for Petrologists'
There was a flight of green ribbon as she turned and skipped up the path in the front yard, disappearing into the depths of the house. The door closed behind her, leaving me to stare at the coloured glass and cracked paint and funny brickwork.

The next day I left for school and met up with the back lane mafia as usual. We made our way noisily through the streets, dribbling discarded cans round lampposts, sticks cleaving the air in imaginary combat. Our conversations were never mundane; which animals saw best in the dark and how you might survive in a jungle with only a penknife. We’d compare all manner of institutions and people; various football teams, television programmes, our parents and our teachers. This particular morning it happened to be prominent neighbours. The arguments and shouting at the end house were discussed; incidents involving the family were described and embellished. I didn’t join in but listened uneasily and then lagged behind, a feeling of gloom descending as I walked along.

The morning dragged. My teacher, who was usually alright, just happened to be in a foul mood and no one seemed to be able to do anything that pleased him. Even the swotty kids weren’t putting in enough effort. As I worked at my topic writing, I noticed that the girl’s pen had leaked and she’d made a dreadful mess of her writing. She had to go out to the front of the classroom while our teacher began making a big fuss about the neatness of her work.

And then it happened. Without a trace of emotion, she wet the floor where she stood.

A confused silence from the rest of us was punctuated only by the occasional splashing of urine on tiles. We all stared at the small, motionless kid who in turn fixed her eyes unflickeringly on the open-mouthed adult.

Fazed as he was, he managed a “Well, Miss Crompton, I don’t think that was called for,” before suggesting she sort herself out in the girls’ toilets. She didn’t move, but continued to stare up at him until a tear trickled unopposed down her cheek and onto a grimy collar.
I watched her standing there and felt anger well up inside. But I said and did nothing.

Eventually the secretary was sent for, who appeared minutes later with the Head Teacher. They guided the girl out of the classroom. The event had the effect of subduing my teacher and everyone else in the class for the rest of the day. I didn’t hear anyone laughing about it as I half expected. There was an instinctive understanding that the strangeness of this girl was rooted in problems of which we could only guess.

I didn’t see her again for the rest of the week. When she did come back, she sat next to me in class. Again I was invited to tea. It would be on Friday she said. I didn’t say anything … I just nodded.

Down our street, as the week progressed, the ‘goings on’ at the end house continued. The details were discussed the following morning as might be expected, but I walked away. I didn’t want to know. It was rainbow ribbon day; Sacky’s birthday. Nothing else should get in the way.

At school I searched for the girl, but there wasn’t a sign of her in the playground. She wasn’t in the classroom either and I sat at my desk, quiet and alone.

Come dinnertime, there were the usual gatherings and games, discussions and pressures; the future trying out their lungs after a morning’s restraint, grabbing and pulling and limbs not quite mastered.

I wanted to talk, to make sure it was still all right, to look forward to whatever sandwiches would be on offer at the end house. I wanted to explore the secrets of Sacky’s new home and to be a friend. It all felt so urgent … I wasn’t sure why.

“Hello. They’ve finished with me now. Are you coming?”

Beneath the multi-coloured ribbon and mousy hair was the face with the question in it; smiling, insistent. She’d appeared out of nowhere, her eyes persuading me to follow. We walked away from the noise and out of the yard at the back of school.

“Where are we going?” I asked pathetically.

“For sandwiches,” she said, and we went on our way through the high street, two kids out of school when they should have been in it. I looked in disbelief at my reflection in shop windows, now grasped as it was by this diminutive, boldly striding anarchist, a rainbow floating in her wake.

“But we’ve got R.E.,” I said, my hand falling free and the ribbons coming to rest.

“This is more important. Come on, Sacky’s waiting.”

And with that she was away again, leaving me to watch, standing outside the Co-op on the corner of our street. Ordinary people continued with their shopping whereas I struggled with more weighty matters. There was the school, with the teachers turning the place upside down in order to find us. There was the girl, part way down the street, offering friendship and sandwiches. Going back was out of the question. The boundaries were breached and I’d have to wait until the ebb and flow of children at home time carried me back through those yard gates again.

She brought out a key and the coloured glass and cracked paint of the front door gave way so that we might enter.

The door closed behind us. Tall and narrow, the hallway was cold, made more so by the echo of our footsteps on an old tiled floor. “This way,” she said and we carried on through the gloom of a clearly empty and abandoned house.

“Where are the carpets ?” I asked.

“They’ve been removed. The removers have removed them,” she said bouncing through a place I imagined was a living room. I stood at its centre and looked around me while the girl with great purpose had entered the kitchen. The walls, even in the light offered by the smallish window, were obviously well acquainted with the paper still covering them. The floorboards, mottled and damp, made you wonder what manner of creature lurked beneath them.

I stood and shivered and thought once more of the shadows I used to imagine here.

We climbed up a flight of stairs to a high place and found a door painted blue, as roughly as the sandwiches had been cut. 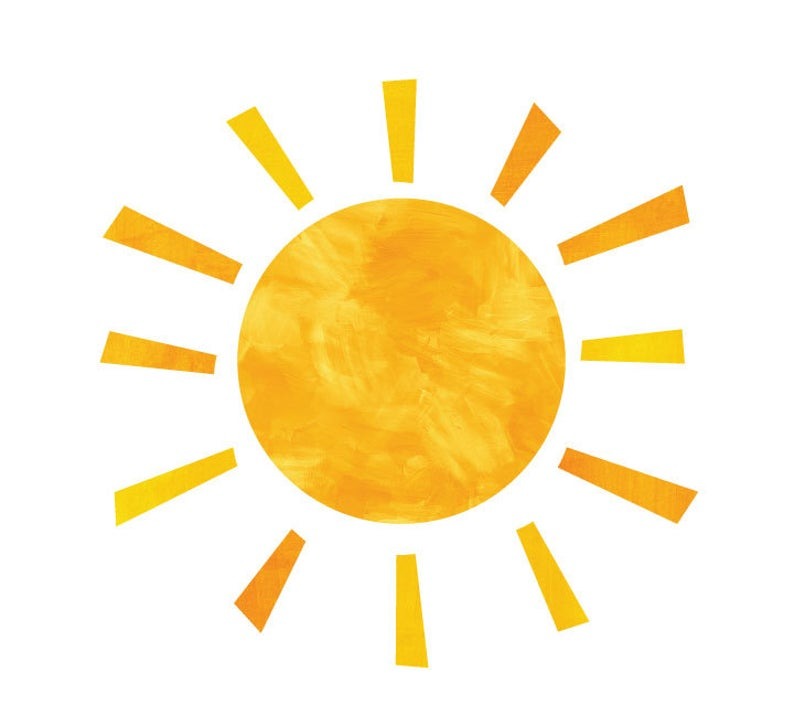 “I’ve finished it now,” she said and opened the door, allowing a flood of colour to rush over me ... for inside was a rainbow. Reds and yellows, blues and greens and purples and every colour worth having, enveloping walls and woodwork. Scenes of summer surrounded us, a mixture of childish gaiety and wild imagination; pictures of butterflies, birds, flowers, and fluffy clouds. A sun, painted on one wall, radiated diverging orange rays from one corner, and real light poured through the window to make it a truly magical place; glowing, warm and friendly.

She walked over to a cupboard set in the wall, the doors of which, adorned with all manner of strange and wonderful flowers, were ajar. Opening it fully, she brought out a tiny bundle of writhing grey fluff, sightless and helpless, and placed it in my hands. I looked down and marvelled at its vulnerability. Revealed in the space behind the door was Sacky, serene in motherhood on a plaid blanket, three other bundles nestled in around her, nuzzling and competing for position.

“Happy birthday Sacky,” she said as we knelt and shared out the sandwiches.

The people came with my Head Teacher at around mid-day. Apparently things had been wrapped up by morning playtime at school and so the way was now clear for the final removal. My Mam tried to explain about the eviction and how the girl would probably have a better chance now that the authorities were looking after her, but I’m not sure that either of us were convinced.

As she got into the car, the ribbons resting on her shoulders, the girl suddenly looked out at me, her face urgent and questioning: “Look after Sacky for me ...?”

And then she was gone, leaving me and my Mam standing outside the house with the cracked paint, the funny brickwork and the grey hairy cat staring down from the attic window.