A True Taste Of Italy At Franco Manca In Leeds 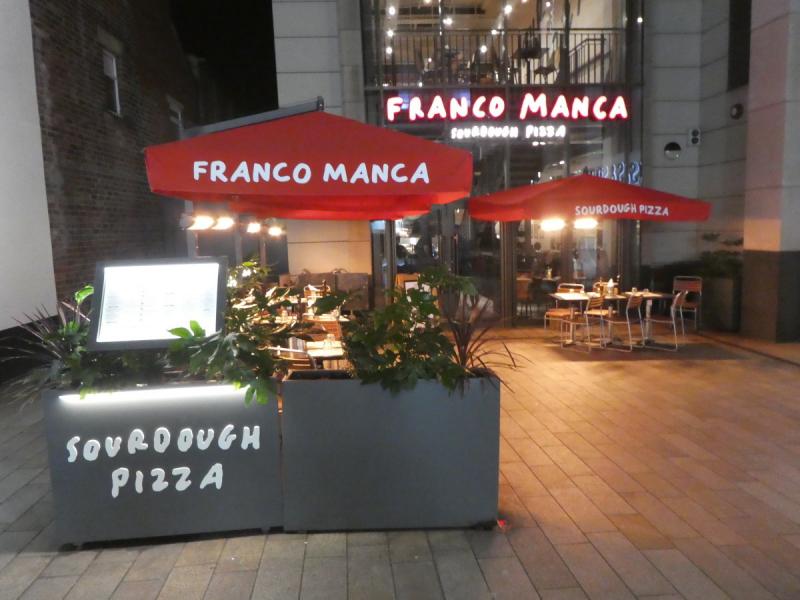 It appears that Franco Manca in Leeds could be a best kept secret as I had never heard of the restaurant in central Leeds. You could easily walk past it, nestled as it is at the back entrance to Marks and Spencer.

We arrived on an early midweek evening and there were already a few fellow diners eating, within 40 minutes of our arrival the place was full. What is so special about the restaurant is that although it is part of a small chain, you would never know that.

One of the reasons why it is so popular is that the dough is made fresh on site every day and fermented for 20 hours. The flour is 100% Italian and comes from the Pivetti family near Bologna, who have farmed there since 1895. The pizza is then made from some rising sourdough and is baked in an oven at 450c giving an easily digestible crust that is soft and chewy. Add to that reasonable prices - a basic pizza starts at £5.00, great speedy and friendly service and you have a very attractive proposition.

Our server was from just north of Naples, Caserta to be precise, where the big palace resides. Having been there a few times we instantly have a rapport.


Platter of cured meats
The pizzas are known by numbers, not names. I decide on No 6 which consists of organic tomato, cured Chorizo and British mozzarella, with an added topping of free range spicy N'duja from Calabria. Boy is it hot, it feels like eating the hot ashes of Mount Vesuvius. Not that I have eaten the ashes on Vesuvius, but they are still hot if you climb up the mountain and stand on them near the summit.


Pizza No 4
My partner chose No 4 which has roasted cured ham, British mozzarella, ricotta and wild mushrooms, which my partner omitted from her pizza. It was as good as a pizza you would get in Lecce, never mind Leeds. If you are vegan you are catered for here as they do a vegan special pizza.

The open kitchen I found added an authentic touch. It appeared to be a well oiled operation, takeaway pizzas were being prepared as well as the restaurant pizzas.


The open kitchen
If you are looking for good food, served in a relaxed atmosphere, with friendly service at a price that will not break the bank, together with a good wine and beer selection, then you need to get here pronto.

I've been let in on the secret, perhaps it's time you were too.


Also by Graham Clark...
All That Jazz - Montreux Jazz Festival Debut Classic Performances On LineFeel The Noize - Slade Announce Christmas TourBingley Veteran Jeffrey Long, 88, Raises Over £1,500 For CharityInterview With Andy Bell From ErasureCreamfields - Get Ready To Dance In 2021