'A Book For Writers But Also, I Hope For Readers' : A Swim In The Pond In The Rain By George Saunders 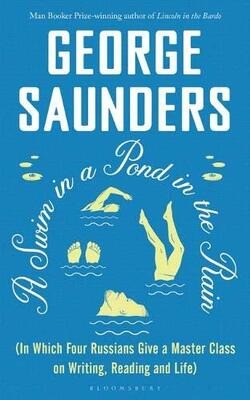 Forming a prima facie conclusion about a book’s content based upon erroneous assumptions is by definition likely to be misleading and on occasion, tantamount to clumsily administering an ungrateful slap upon the well-meaning face of Serendipity herself! A cursory thumbing of George Saunders’s latest book led me to pigeon-hole it as a potentially interesting ‘how-to’ guide for writers. Saunders, best known as a Man Booker Prize winner and New York Times bestselling author of Lincoln in the Bardo and Tenth of December, is one of those literary figures whose finest works have been generally eclipsed by their less deserving, but rightly celebrated cousins.

He is, for some, a contemporary master of the short story form, yet far more widely known as a novelist. Now, he’s penned a book which defies reader expectation and delivers so much more than any initial impression might suggest. Surprisingly funny yet scholastically rigorous, his idiosyncratic essays deliver to the reader the literary equivalent of what a contented pig might feel when rolling in mud…a messy metaphor, but hopefully a pertinent one !

Suffused with lightly worn erudition, witty whimsy and provocative persiflage, Saunders imbues his book with his magnetically avuncular persona. He is an inclusive teacher who leaves dogma out of didacticism, eschewing the critic’s inveterate need to bloviate, or the intellectual’s proclivity for obfuscation. Subtitled, ‘In Which Four Dead Russians Give Us a Masterclass in Writing and Life’, the book does indeed honour its stated promise. However, in addressing his authorial goals, Saunders also offers his reader something akin to a literary games compendium…a box of diverting treasures, all orbiting two seminal questions: why and how do we read, and how do great writers go about their craft ?

An acquaintance with nineteenth century Russian literature is not assumed or required, neither is the book’s intended reader cast in the brittle mould of an ambitious scribe, feverously penning their own masterpiece in pursuit of literary garlands. Saunders’ only assumptions are that the book’s reader possesses a curious mind, a willingness to hear him out and a love of storytelling and the magical properties inhabiting well-crafted fiction.

Esotericism is banished in favour of a non-doctrinal, exoteric insight and wisdom, gently held together with gossamer thin authorial modulation. Saunders knows we learn nothing unless we enjoy the process of learning itself, and whilst he may not be a writer worthy of the stature of those he explores, his engaging gem is a virtuoso performance of the art of nuanced enlightenment garbed as thoughtful entertainment.

For the last twenty years, Saunders has taught an exclusive class at Syracuse exploring nineteenth century Russian literature, with the aim of enabling already talented writers to discover their own ‘iconic space’ and unique authorial voices. His course presupposes that participants have a polished, pre-existent command of the primary virtues of good fiction and appreciate the building blocks or desideratum of compelling short story writing.

His latest book takes the quintessence of his teachings, condenses these musings into bite-sized chunks and innovatively repackages them so as to be understood by both ambitious authors in pursuit of literary gold, and keen bibliophiles interested in deepening their love for and appreciation of fine writing. The book has consequently been crafted with great care, unambiguous respect for the reader and infectious, big-hearted legerdemain.

Structurally, we are given seven short stories presented in their entirety, extracted from the canons of Chekhov, Leo Tolstoy, Ivan Turgenev and Nikolai Gogol. These literary goliaths mined their masterpieces from the exploration of humanistic truths during a seventy year renaissance in Russian literature in the period pre-Stalin. Saunders’s own work echoes their moral-ethical landscape as he too explores similar themes, albeit examined through the prism of his own epoch. So the book’s first delight is to offer its reader a beautifully curated collection of some of the finest short stories ever written. Reason enough to adore the book !

Saunders then begins the process of presenting his creative writing thesis in essay form by dint of the meticulous dissection of each story in a question and answer format; a collaborative investigation conducted by both the author and the reader alike. Propositions are clarified, evidence sought and tested for falsifiable fallacy and his hypothesis is gradually revealed, sans any unsettling whiff of declamation. His arguments are thankfully not a flaccid intellectual bricolage masquerading as sagacity and predicated upon egocentric dogmatism. They are clever, but more importantly his ideas are sheathed in humility, and as unintimidating as they are gracefully rendered. 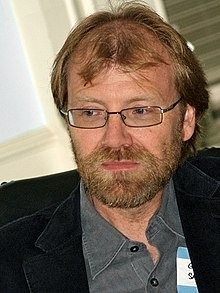 George Saunders
His literary analysis of each tale is scintillating. The impenetrable bulwarks and parapets of formal, procrustean literary criticism are consigned to the junk can. Such prescriptive attempts to bogart a reader’s opinion are replaced by the sparkling, digestible understandings of a perspicacious author intent upon illuminating possible truths, rather than contorting or occluding such precious mysteries. We glean meaningful glimpses into the characters and minds of the haunted geniuses who wrote them. So, the book’s second gift is the opportunity to discuss the stories we have read with Saunders and in so doing to appreciate their magnificence all the more.

We all know classic Russian literature poses the ‘big questions of life’, such as why are we here and how do we survive the experience, or improve the world around us ? Saunders’s analysis of specific texts becomes the res gestae of his argument, enabling us to draw our conclusions about what the Russian Masters had to say on these thorny dilemmas. Through their humour, pathos and compassion, they speak to us, and Saunders does a fine job of offering a compelling translation of their mesmerising words and sagacious wisdom.

En passant of exploring each of the tenets of his literary theory, a grand term belying the simplicity of his propositions, Saunders grapples with the psychological, intellectual and emotional factors animating the act of reading per se. He tells us, ‘To study the way we read is to study the way the mind works’. Given that we interpret the world around us through the cynosure of our unique minds, developing that reading mind may well be an indispensable tool in the navigation of our own often misinterpreted realities.

Saunders offers up not just his personal understandings of how we read, but how author and reader meet one another at the porous intersection between the writer’s mind and the reader’s. For me, this is yet another of the book’s great virtues and rewards.

In addition to working through Saunders’ artistic ideology and the literary devices augmenting them, Saunders has dextrously constructed a series of ‘Exercises’ to be found in the appendices. We get to try out what we have learnt, not with the voice of a strident teacher haranguing us for ideological obedience, but in the spirit of playful indeterminacy. This section of the book is nothing short of a diverting delight, a place to refine acquired understandings and kick the tyres of all that Saunders has absorbingly explored. Any reader can play and there are “no rules” as Doris Lessing once said, the overarching principle at work is that of amusement as the affable servant of guided curiosity.

Saunders’s nuanced understanding of “how literature works” and the creative acts required to produce compelling fiction boils down to two constituent parts. Firstly he believes literary devices are strategic tools and can be understood by readers and writers alike. Every word, phrase, paragraph and page forming a short story must be in loose alignment with, and demonstrative of, an acknowledged set of technical imperatives. He tells us, “A story is a linear-temporal phenomenon. It proceeds, and charms us (or doesn’t), a line at a time” and can be understood as “a series of expectations and resolutions”. For a story to have artistic power its words must operate as dynamic conduits, “routing its energy to the heart of the story” and its plot or “meaningful events” must be the consequence of well crafted causality.

A reader’s desire to ‘keep reading’ regularly refreshed by each sentence theoretically acting as a ‘gas station’ vibrantly refuelling this urge. If a scene is not intrinsically engaging or does not advance the story in a meaningful way, it is in opposition to what he terms the ‘Cornfield Principle’. Understanding these principles can potentially deepen the joy of reading itself.

For the writer, he advocates obsessive, censorious line editing to the point where the author is expressing themselves without a single violation of the categorical imperative to ‘intuitively’ use only their individual, authentic ‘voice’. For Saunders, mimetic artifice etiolates artistic integrity and force and he drawing his own Hemingway-esque experience to support this point.

Saunders’s takes Milan Kundera’s term ‘supranatural wisdom’ to encapsulate his ideas. Only by tapping into an intuitively accessed font of understandings and instincts, can an author pen anything truly expressive of their unique talent. He goes as far as to say that ‘Every true novelist listens for the supranatural wisdom (within them), which explains why great novels are always a little more intelligent than their authors’.


Also by Paul Spalding-Mulcock...
…The Blurred Line Between Friendship And Love: You And Me On Vacation By Emily Henry'...That There Was In Me An Invincible Summer': Three Summers By Margarita Liberaki‘Why Endure My Own Dehumanization?’: Assembly By Natasha Brown'Hurt People, Hurt People...': An Ordinary Wonder By Buki PapillonAmericana Meets Aesopica : Fox 8 By George Saunders
‘The difference between a great writer and a good one (or a good one and a bad one) is the quality of the instantaneous decisions she makes as she works’. He goes on to conclude, ‘we can reduce all writing to this : we read a line, have a reaction to it, trust (accept) that reaction, and do something in response, instantaneously, by intuition’.

So, much like an iconic Russian Doll, Saunders has given us a book containing several fascinating components, each a reason to thoroughly enjoy his marvellous musings. A book for anyone, sent ‘From Russia with Love’, promulgating softly spoken ideas, all conspicuously laced with its author’s irresistible charm, wit and intellectual moxie. A gem I adored and wildly misjudged on first impressions !