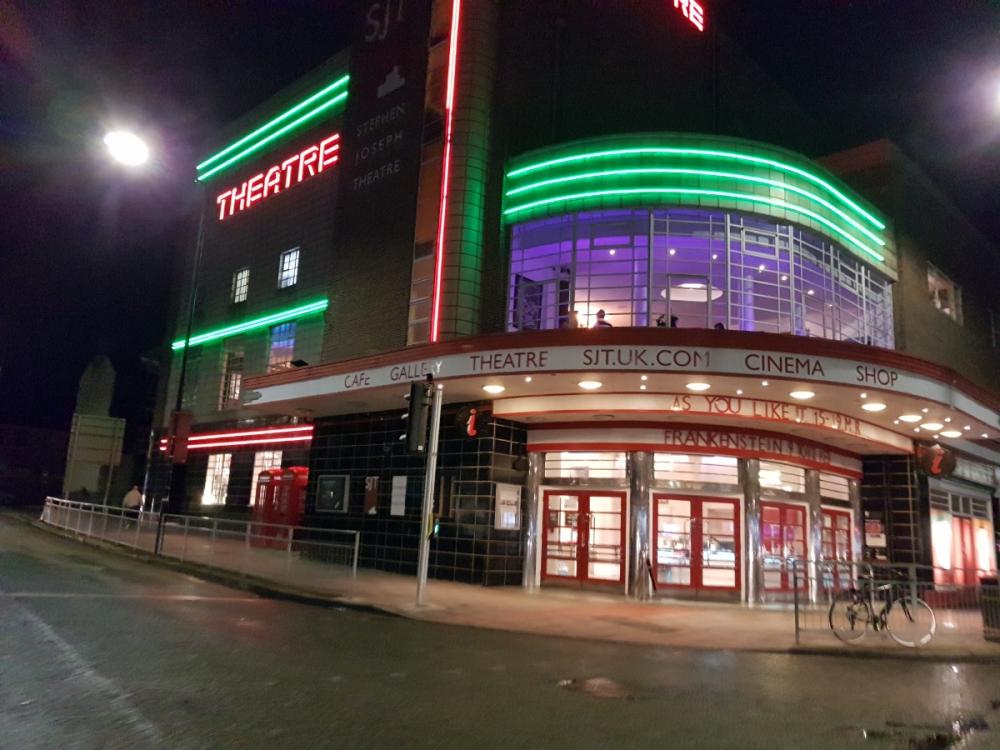 To my shame I had never visited the Stephen Joseph Theatre (SJT) in Scarborough – legendary home to that West End acolyte, playwright Alan Ayckbourn – until recently.

Little did I know that two new names are now being spoken about with equal reverence: Martyn Hyde and Stephen Dinardo.

I am equally ashamed to say that I have not met either and that I do not have any photos of these gentlemen, however, I have sampled their wares, for this delectable duo are the chaps behind the east coast town’s best kept secret, the Eat Me Café, now partnered with the SJT. 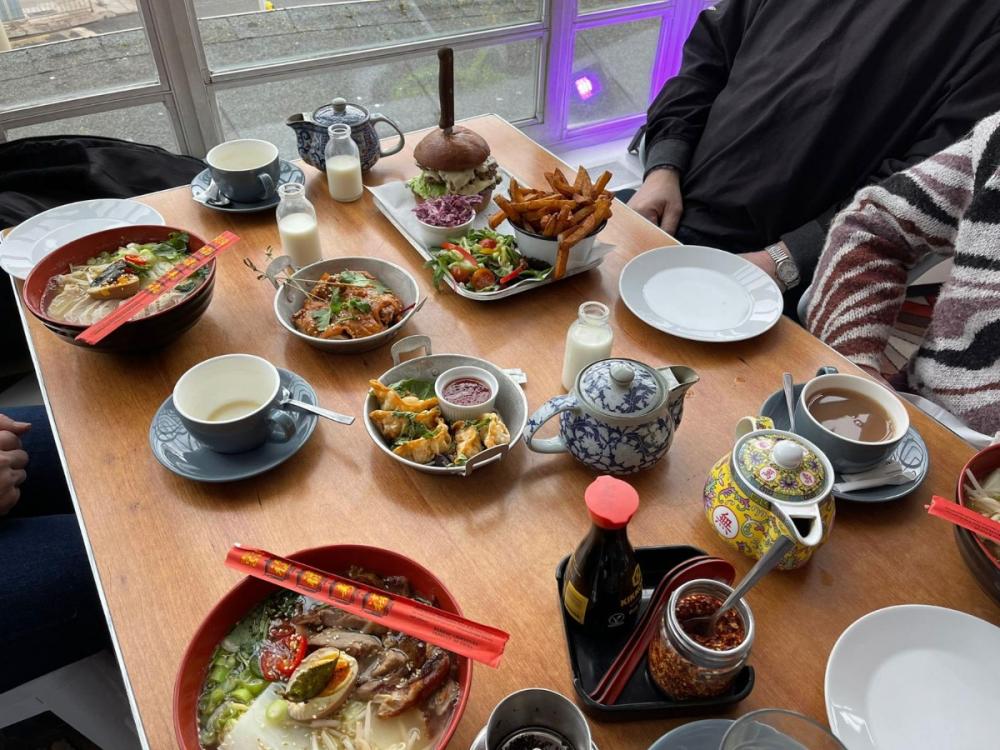 The award-winning café, named as a Local Gem in The Good Food Guide every year between 2015 and 2020, has been operating from the SJT Bar & Lounge since August 2020 as 'Eat Me @ The SJT', which has proved hugely popular with both regulars and new diners alike.I called the waitress over. “This Asian menu offering is stunning,” I said, “do you have an army of Thai chefs in there?”

“No sir, the head man is ‘local’ but lived in Thailand for years and paid attention to his teachers!” she quipped.

An eclectic mix of British & Asian cuisine, there are Japanese Ramens for your noodle fix, newbies like the Bento Box of Delights and the Dhal of the Week….all sitting alongside a raft of British food options that’ll make your mouth water.

Blown away aren’t two words I use very often but such was the quality – and size of portions – that I couldn’t face another morsel before retiring for the evening in a sated stupor at the Derwent House Apartments on Esplanade Gardens, another jewel in the Scarborough crown.

Claire and Ben are the mother and son behind Derwent House, a former hotel dating back to 1852 but, since last year, now a range of no-expense-spared two and three bedroomed apartments that would stand with pride alongside Mayfair’s best. 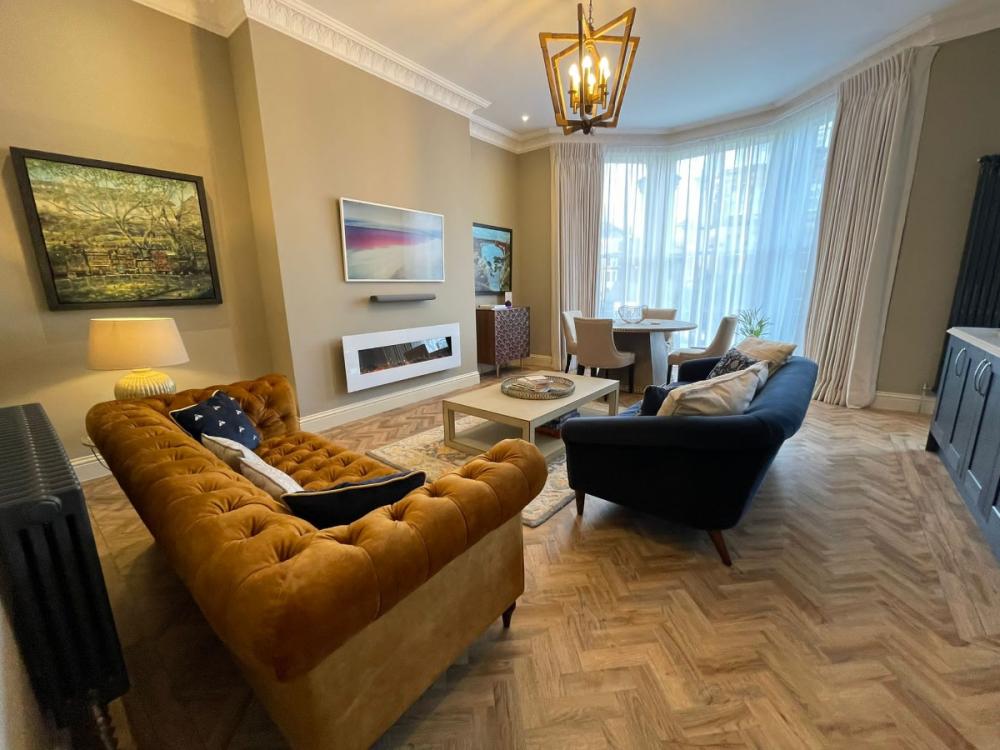 Each apartment is named after a favourite or little-known beauty spot along the River Derwent. Apartment 3, the ‘Broxa’, pays homage to a small hamlet of the same name set deep in The Forge Valley Nature Reserve, famous for its expansive forests and hiking trails.

But it’s the detail that differentiates this from so many other run-of-the-mill self-catering apartments: phone charger points next to your bed, a groaning wine rack from which you can make a purchase if a visit to the offy looks unattractive after 8pm, beautiful fittings and furnishings, traditional radiators, easy to use temperature controls, umbrellas for inclement weather…..the list goes on. 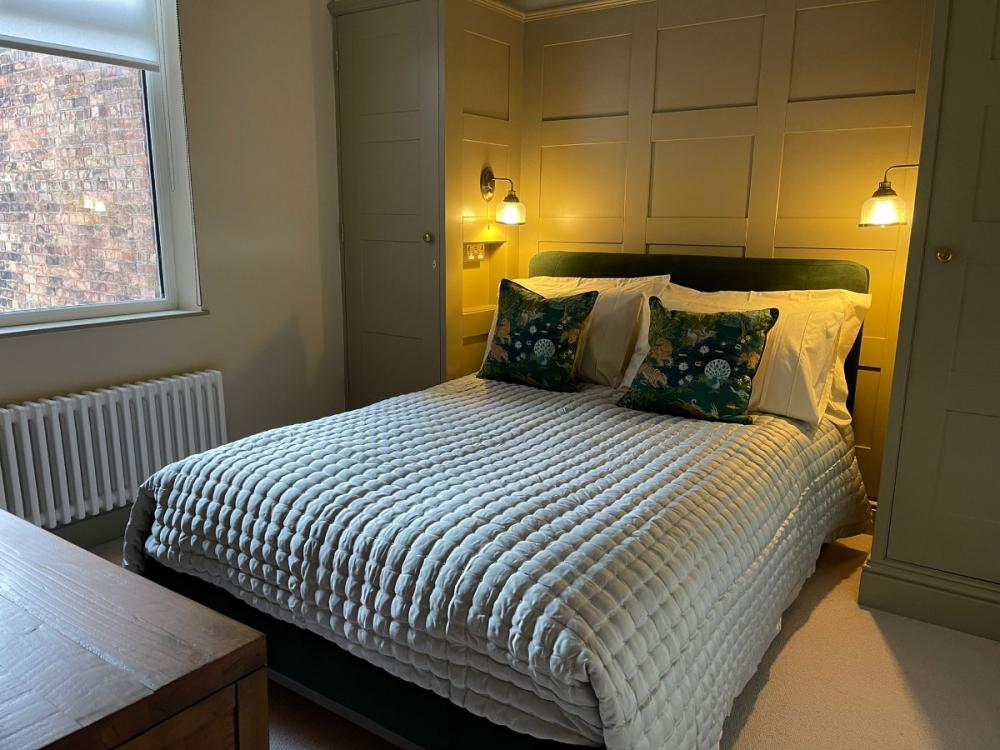 There is even a small veranda for sitting out on, weather permitting, and, as if that wasn’t enough, we arrived to high quality cakes, bacon for breakfast, half a pound of butter and a loaf of bread along with orange juice and a full complement of teas and coffee 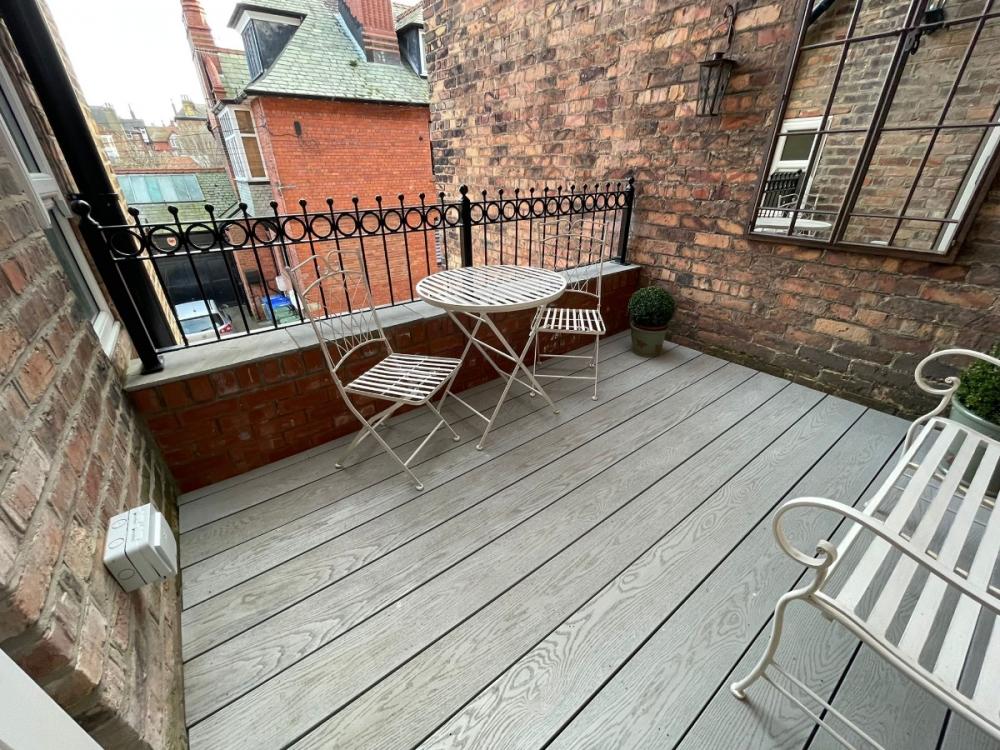 ... just to get us off the start line! None of that was expected which is a sign of someone one step ahead in the customer care stakes.

Our host Claire even popped in to check everything was to our liking. It was and she was a one-woman lesson in how to ‘do’ customer care. Exceptional!“I’ve never been to Scarborough Castle,” said my brother Carl. 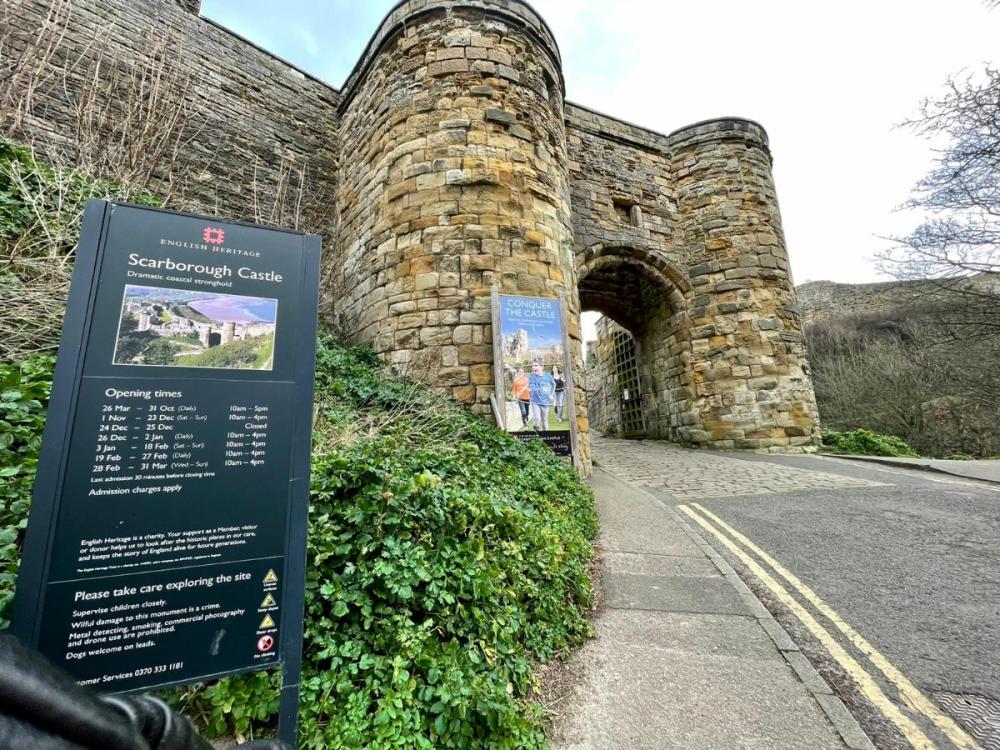 My sister-in-law chorused in with a similar refrain that she too had never been to English Heritage’s property on the other side of town so, with the promise of at least three hours dry weather, we put our best feet forward and headed for the ancient ruins. 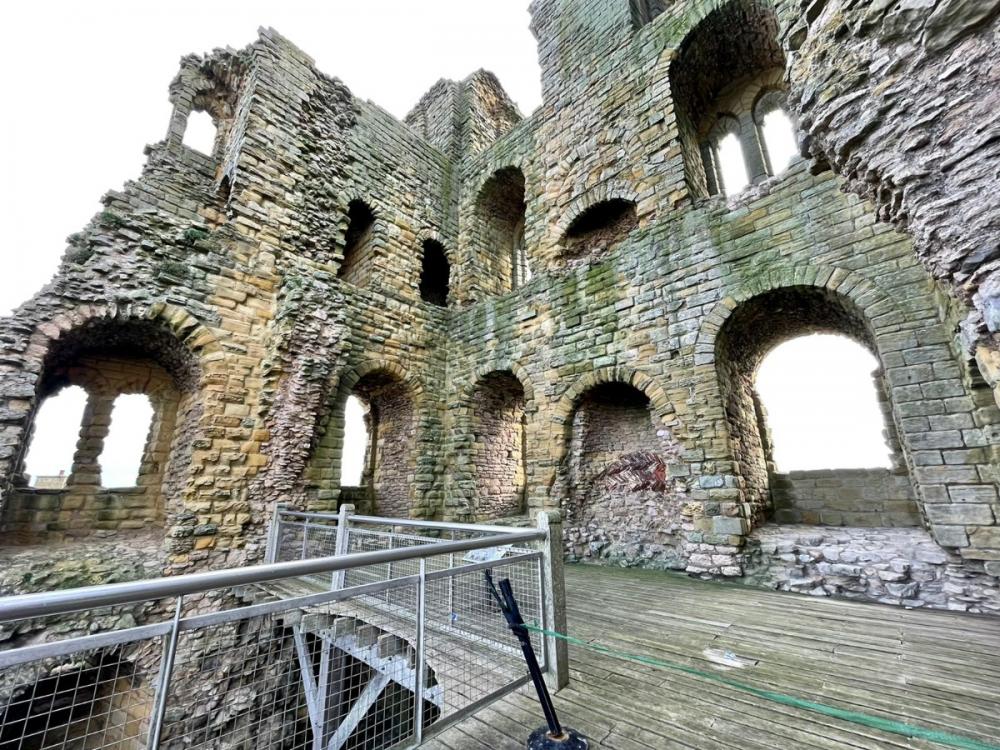 It was blowing a hooley outside and our visit was the wrong day for the follicly challenged or anyone wearing a toupee. One wrong move and your wig would have been like a terrier on the loose across the castle grounds!

But, despite gusts that were challenging my 90lb wife’s ability to stay on her feet, the former medieval Royal fortress still had time to reveal itself before lunchtime rains arrived.

Situated on a rocky promontory overlooking the North Sea, Scarborough Castle – a scheduled monument of national importance - encompasses an Iron Age settlement, Roman signal station, and Anglo-Scandinavian settlement and chapel, all within a 12th-century structure complete with its 18th century battery.“What’s a joke shop?” said my Filipino wife. We had, by now, walked down into town seeking shelter from the rain. Within minutes we were checking out false boobs, dirty fidos, whoopee cushions and a raft of other items designed to delight every child and embarrass every unsuspecting adult.

There was just time to check out Scarborough’s wonderful Old Market Hall... 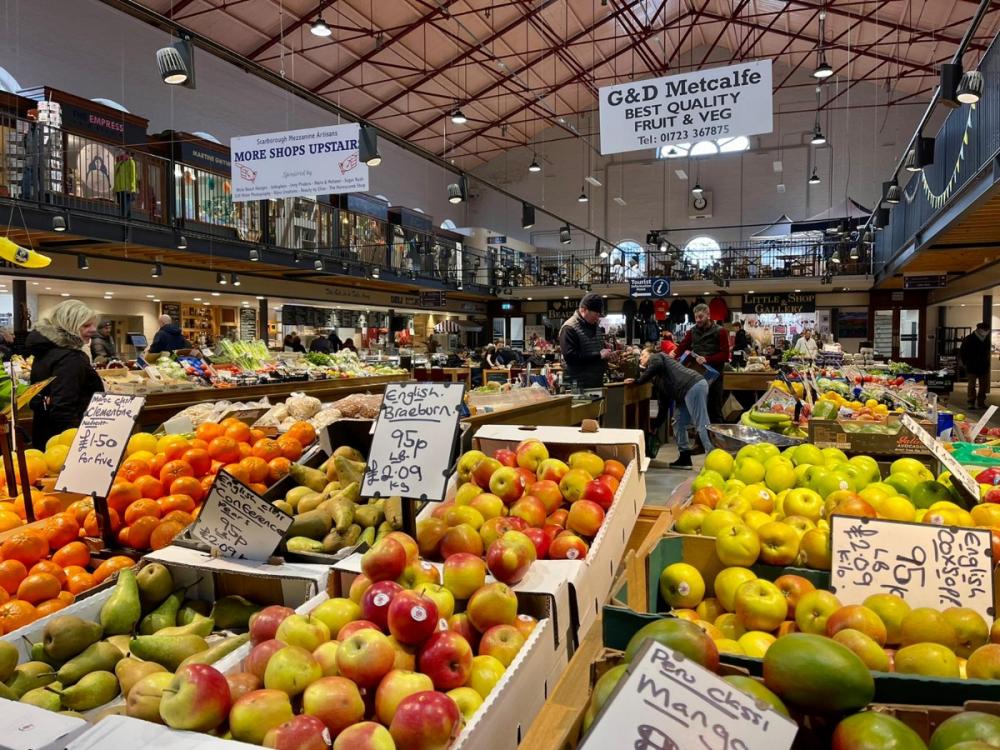 ... before heading on to the town’s Art Gallery which houses the Borough’s permanent collection of fine art. 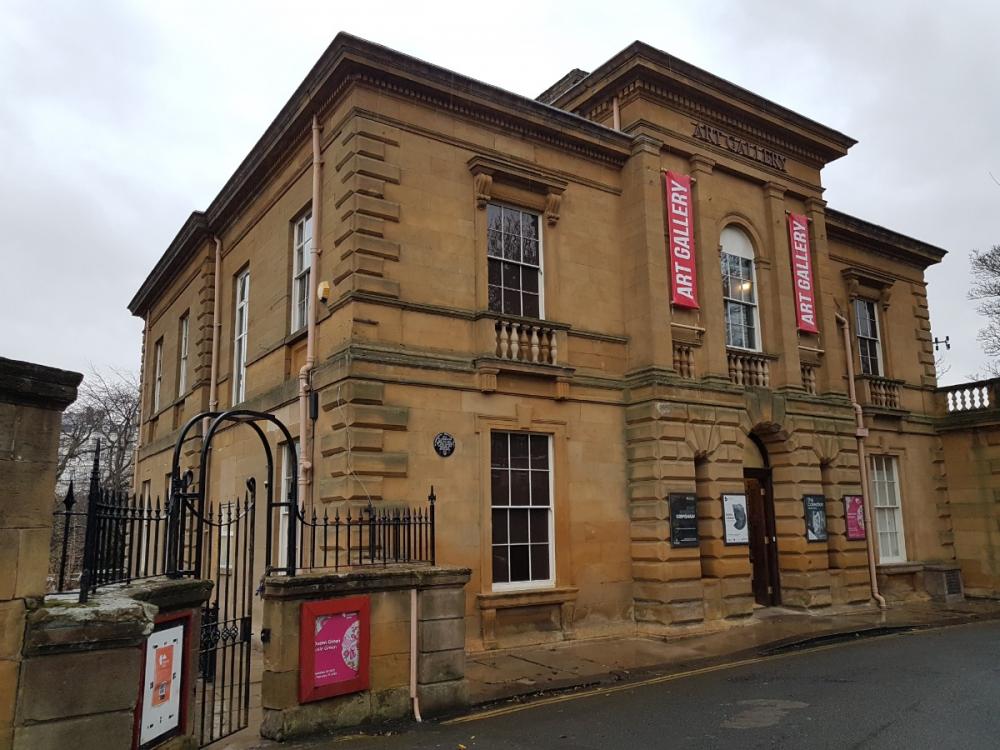 The gallery, originally called Crescent House, was built as a family home in the late 1840s by local solicitor John Uppleby. This Grade II Italianate villa is one of the finest buildings in Scarborough, set in the beautiful Crescent Gardens in the centre of town. 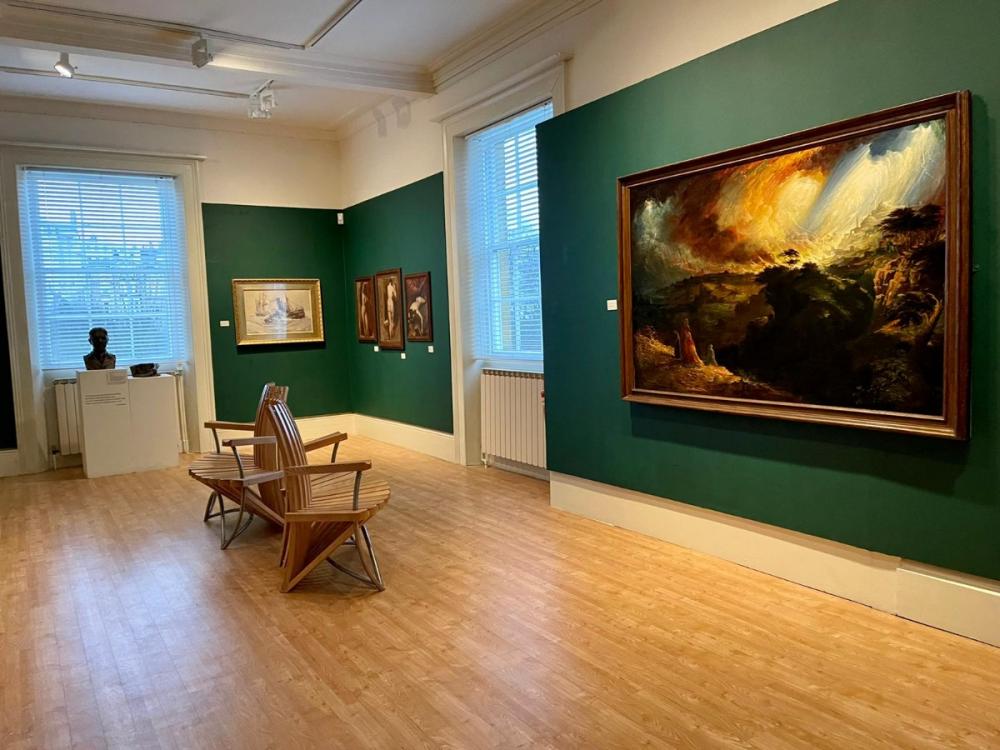 are something to behold and, right now, there is an opportunity to see Emma Gibson’s Quicksand exhibition

It features a triptych of sculptures which see minuscule grains of sand transformed into megalithic forms, putting this endangered but seemingly ubiquitous material... 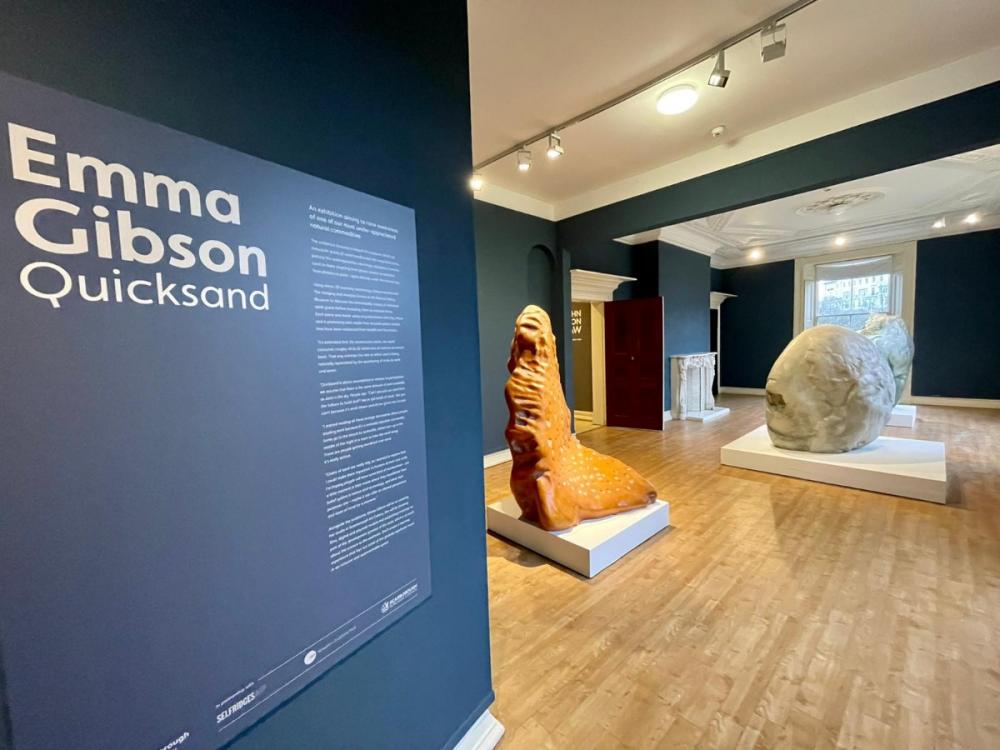 ...used to make anything from phone screens to windows, from plastics to paint ¬– quite literally under the microscope.“I’ve passed it a dozen times but never been in it,” said my brother. He was referring to Scarborough’s Rotunda, just a few minutes from the Art Gallery. We made our way briskly, dodging the rain as best we could using the shelter of arches, buildings and a nearby car park! But our journey, if somewhat soggy, was worth it.

Opened in 1829, the Rotunda Museum is one of the world’s first purpose-built museums 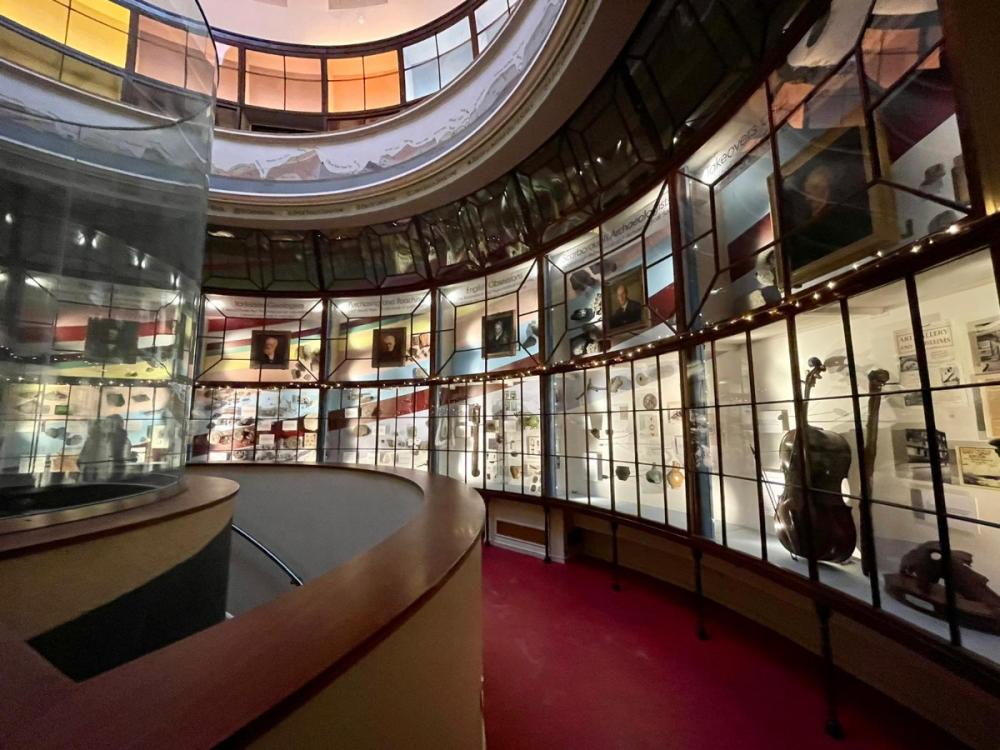 and was constructed to a design suggested by William ‘Strata’ Smith. The interior, with its fascinating Georgian gallery, features a frieze showing the geology of the local coastline designed by Smith’s nephew, John Phillips. 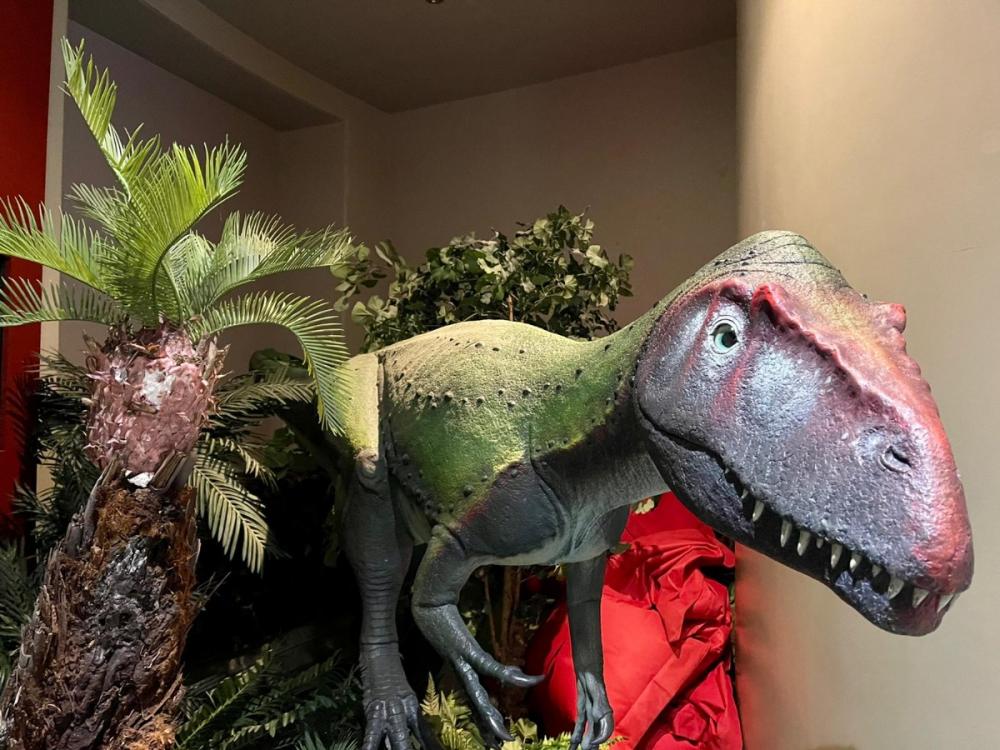 The original cases tell the history of the museum and they explore the stories of the nineteenth century Scarborough Philosophical Society which brought the collections together.“They’ve got Netflix said Mrs Hopkins.” 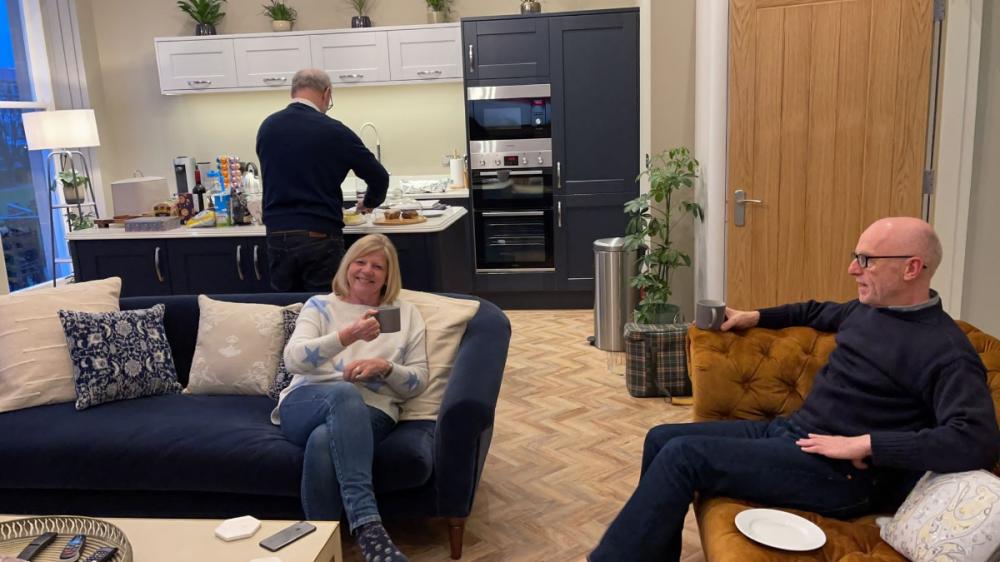 We were back at our apartment in Derwent House, a wonderful refuge with its cosy backdrop and soft lighting. Outside the rain pounded the pavements, inside we were as snug as bugs in rugs!

Seduced by our evening of east coast luxury, and fed to bursting point with lasagne, there was just one challenge to face the following day: more nourishment! 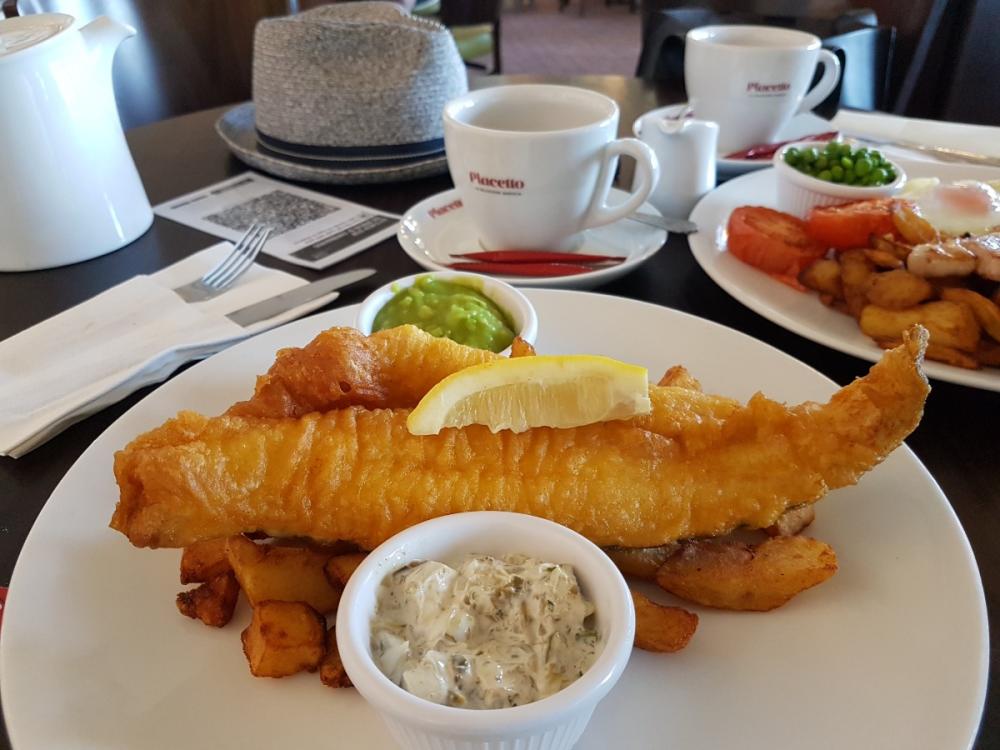 although it is nigh on impossible to visit this ‘entertainment’ emporium – with food! - without sampling a plate of fish and chips. We lasted until 1pm before succumbing.
“Well that was a bit different,” said Carl. 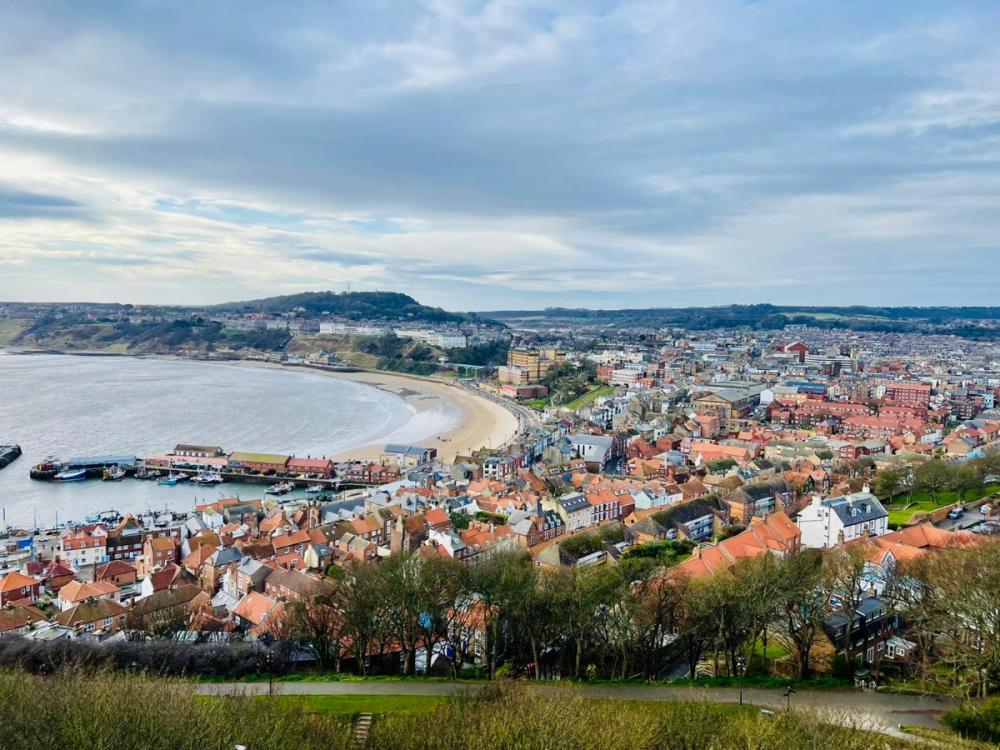 “Well, you mainly associate this place with the beach, amusements, ice creams and walks along the front. But, wasn’t it wonderful to stay in such an amazing place and sample the ‘cultural’ side of Scarborough including a couple of cracking museums, and some Asian food to boot?”

My brother was right of course.

And with Scarborough Restaurant Week cooking from March 14th, what better time to have a trip to East Yorkshire, to sample the Asian East and to look at Scarborough with a new set of eyes. It’s on the up. Go and search for the hidden gems, you just might be surprised.