An Interview With Femi Kayode - Author Of Lightseekers

Femi Kayode. Image credit Nicholas Louw
Femi Kayode, author of debut novel Lightseekers (published in February) is a writer who knows how to craft a compelling story. It was unsurprising, therefore, to interview him and discover his personality to be vibrant, forthcoming and honest. I praised his characterisation in the novel, and I understand now that this must stem from his own self-awareness, his sensitivity to others, and his life experience.

I asked who he is, beyond clinical psychologist-cum-advertiser-cum-writer: “I think I am many things… I must confess I still don’t know what makes me tick. I have a suspicion my wife does, but she’s not telling.”

He trained as a scientist and pursued post-grad. programmes ranging from psychology to public health. His parents were teachers, which he believes to be why he embraces education, more recently studying creative writing. He is a partner in an advertising agency in Namibia, where he lives with his wife and teenage sons. He grew up in Nigeria where it was hard to make a living as a full-time writer, and so the career path he chose was more “an extension of (his) creativity.” He says advertising is considered “pop art, but in reality, it is crafting at the highest level,” and he enjoys brainstorming ideas with his team, which in turn often become “part of the popular culture.” He has never had to fit writing into his life, but rather, it is his life. On his journey, he has worked in television, “churning out scripts, or editing them,” and that role gave him the chance to utilise his skills as both a branding consultant and a content creator. He even fancied himself as an actor in his early days; however, he says - “trust me, we do not want to talk about that misadventure.”

Despite his training in psychology, he realises with hindsight that he never truly planned to follow that career path. He was fascinated to learn how the human mind functions, and it broadened his own self-awareness. He would have gone in to teaching, even considered doing a PhD, but really, he saw his training more as a way to enhance his writing. Psychology did however help his transition to advertising: his first campaign was the launch of an anti-depressant called Zoloft, and his background learning and knowledge added strength to his marketing proposition. His career became fast-tracked, something he isn’t certain would have happened if he hadn’t an understanding of depression, nor any exposure to anti-depressants which he acquired whilst training as a clinical psychologist. 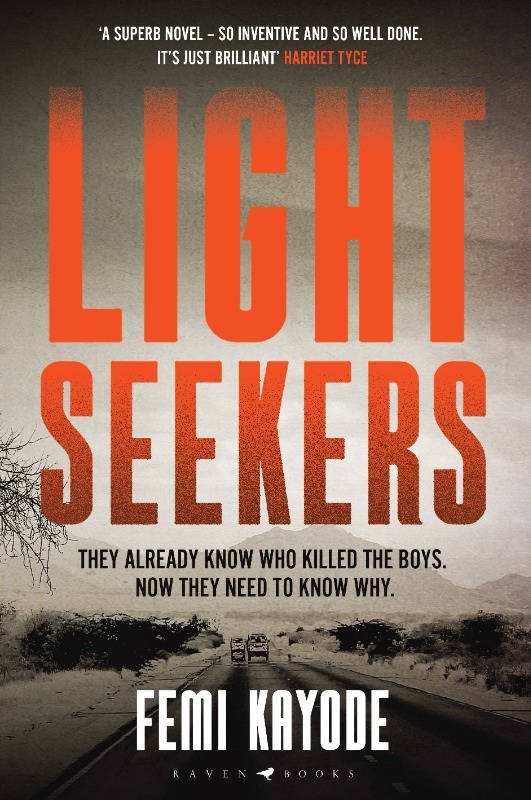 Kayode is currently working on the sequel to Lightseekers, whilst creating an outline for a trilogy based in Namibia. He has “many stories I want to tell, and I am looking forward to telling them.” Penning a good story is more important to him than the genre it falls in to; he relished the creative freedom and ownership that writing Lightseekers provided. Whilst he thinks he “is officially done with film/tv”, his attitude is “never say never.”

He describes his own style as “simple and accessible,” adding, “the jury is out on whether I am a good writer, in the traditional sense of the word.” A lifelong fan of John Irving, who “combines great writing with a superb sense of story”, Kayode also admires Sidney Sheldon as a crime writer, appreciates James Baldwin who takes “an unflinching look at life written in near perfect prose” and is inspired by John Le Carré’s “ability to combine social commentary with crime and thriller.”


Also by Caroline Spalding...
Review: Bright Burning Things By Lisa HardingReview: The Smash-up By Ali BenjaminGirl In The Walls By A.J. Gnuse - A ReviewMoors & Maps – In Conversation With Chris GoddardReview: The Children Of Ash And Elm - A History Of The Vikings By Neil Price
That Kayode joins a wealth of compelling and exciting African writers was corroborated by the last Booker long and shortlist, but beyond this rarified universe, he cites numerous writers and poets we should take note of: T.J. Benson’s The Madhouse is “simply beautiful writing about contemporary Nigeria,” Leye Adenle is “what I call the ‘godfather of Sunshine Noir’” and “on the crime fiction front, Oyinkan Braithwaite remains a force to be reckoned (with).” Safia Elhillo he describes as a ground-breaking poet; her collection, The January Children, is “a must read” and Romeo Oriogun is one to watch: “A vibrant voice that is unrepentant and uncompromising in his language and views,” his work enough to make the reader almost weep. In the UK the stand-outs for Kayode are Hafsa Zayyan, author of We Are All Birds of Uganda and Caleb Azumah Nelson’s Open Water is “heartbreakingly beautiful writing.” I take Kayode’s mild scold with a pinch of salt: “if you don’t know them, you definitely should!”

Femi Kayode opened the interview by indicating that writing the author bio for his book was more difficult than writing the book itself, but he was expressive and enthusiastic in his response to my questions, his personality shone through with warmth, humour and even some self-deprecation. He told me he cooks when he is stressed, he belongs to “the ‘rice is life’ gastronomic school of thought”, and he adores watching films as much as he adores his three dogs (“and they know it”). Perhaps he is right in saying that the author bio might be “short enough to tease, but not enough to quell curiosity”; getting to know this author a little better certainly amplifies our anticipation of his next outing.


Lightseekers is published by Bloomsbury