Another Dominant Win For Hamilton In Hungary

Lewis Hamilton comfortably claimed an eighth Hungarian Grand Prix victory as the ever more dominant Mercedes team proved again that the rest of the grid is still unable to pose any realistic challenge to their ongoing superiority. 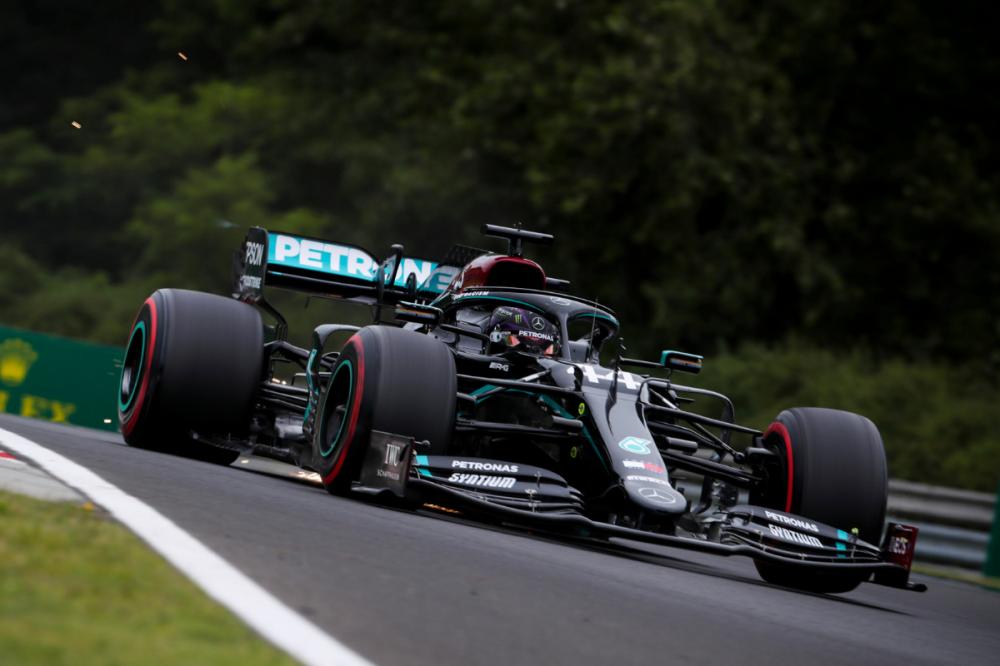 Lewis Hamilton and his flying Mercedes again proved untouchable
After one thrilling race in Austria and a second one there which proved to be a little less so, there had been a general feeling that the tighter and slower nature of the Hungaroring track, where outright power isn’t key, might just help the likes of Red Bull, Racing Point and Ferrari to take the fight to Mercedes, but such hopes were to prove to be very much unfounded.

Before the travelling F1 circus had arrived in Budapest there had been complaints from some quarters about the strict anti-coronavirus restrictions imposed by the Hungarian authorities on all UK and non-EU race attendees, which required them to stay in their hotel rooms when not at the circuit or risk a 15,000 Euro fine or even imprisonment. Red Bull’s highly experienced team principal Christian Horner was one of many voices of reason though, saying “Given the choice of those conditions or not going racing, I think we’d all sign up for them as it’s only a week in our lifetimes.” Very true. 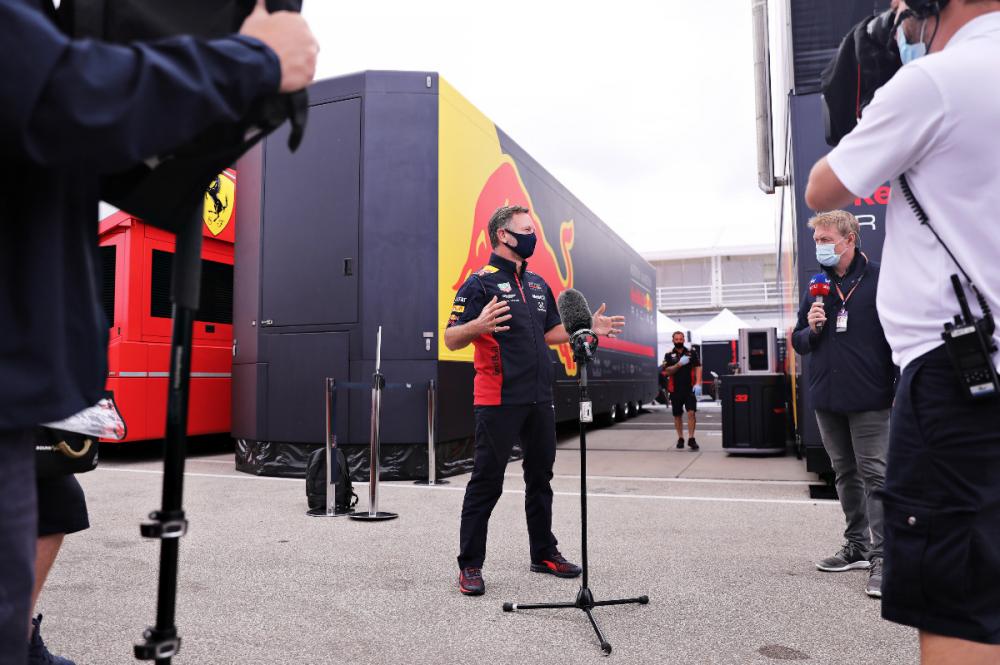 Red Bull’s team principal Christian Horner shares his thoughts with Sky Sports F1
The Racing Point team is very much a hot topic at the moment for two reasons. Firstly all the paddock jokes about its 2020 car being a “pink Mercedes” due to it being very similar to last year’s double championship winning Mercedes became rather more serious when, following the second race at the Red Bull Ring, Renault protested the legality of Racing Point’s car, with further post race protests likely. Evidence is being collated for an official hearing and adjudication, which is due to take place the week after next. Depending on the outcome, an appeal may follow and this could be just the start of further investigations into the car and the team’s relationship with Mercedes. All very F1!

Secondly, during the days leading upto the Hungarian Grand Prix weekend rumours had started to circulate about a possible 2021 move for Sebastian Vettel from Ferrari to Racing Point, which will be renamed as Aston Martin next year. Apart from whether the German four-time champion might undertake such a move to the now far more competitive team, there was also the question of which current driver he might replace. 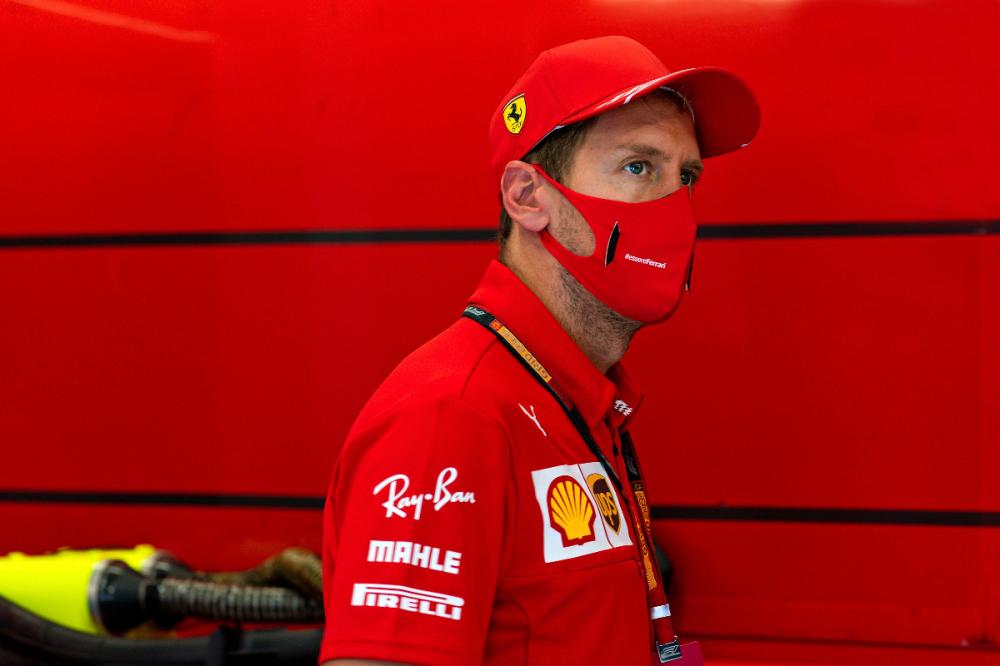 Seb Vettel deep in thought “To Racing Point or not next year?”
Initially it seemed that Sergio Perez might have to make way, as, although the Mexican is universally accepted as faster than his Canadian team-mate Lance Stroll, it rather helps the latter that his father is a major figure in the consortium which owns the outfit. However, the focus then shifted to the possibility of Stroll being the one to step down. Sources have suggested that Vettel’s deal might already have been done, but this was constantly denied by both the team and the German driver. With this year’s cars being retained for 2021 too, Vettel being dropped by Ferrari at the end of this season could just work in his favour as Racing Point are currently faster than the iconic Italian Scuderia.

Elsewhere down the pitlane, as Valtteri Bottas seemingly edges ever closer to another contract extension with Mercedes, you had to feel for George Russell on Thursday when Williams confirmed that it would be retaining the highly promising young Brit for a third season in 2021. Normally good news for a driver, but not when it in effect ruled out any potential promotion for the Mercedes junior driver to the works team for now at least. 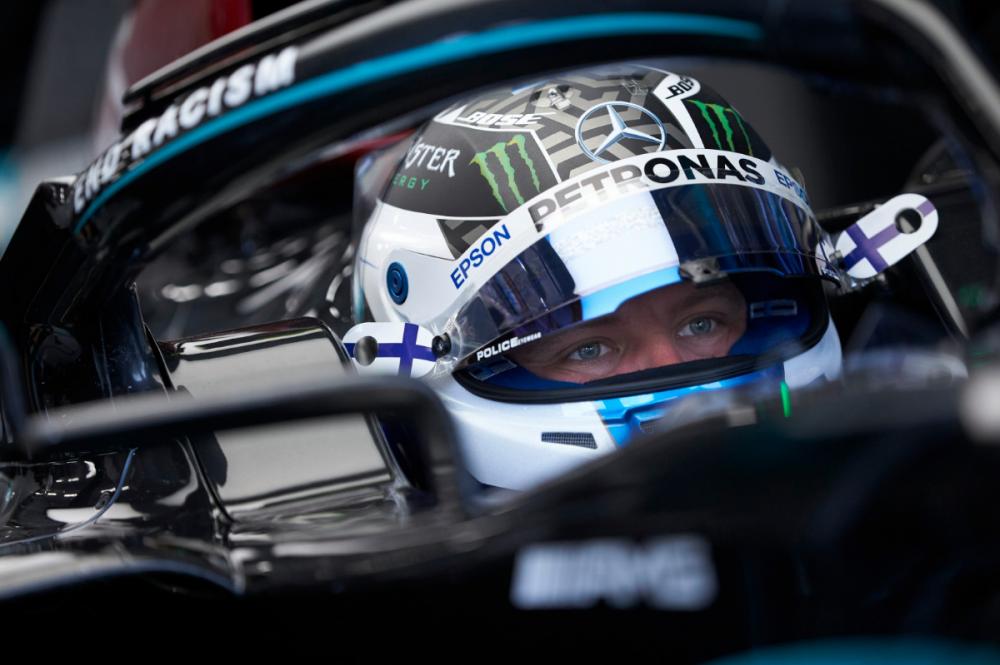 Valtteri Bottas looks to be edging closer to a contract extension with Mercedes
Off-track issues aside, when the cars headed out for Friday morning’s opening free practice period it was a case of business as usual as the black Mercedes cars pedalled by Hamilton and Bottas topped the timesheets ahead of the Racing Point duo, with the Ferraris and Red Bulls off the pace.

The afternoon session proved to be decidedly wet and seven of the twenty drivers, including Hamilton, failed to set a lap time. Of those who did, Vettel emerged fastest, just over a quarter of a second quicker than Bottas, with those Racing Points lurking fourth and fifth behind McLaren’s Carlos Sainz. Come Saturday’s final practice period the weather had improved and Mercedes dominated again, with Bottas just outpacing Hamilton and Charles Leclerc’s fourth placed Ferrari sandwiched by the Racing Point chargers.

With only Monaco outranking the Hungaroring as a circuit where overtaking is particularly difficult, qualifying had an added importance and there was a threat of rain in the air too. Russell and Nicholas Latifi gave the beleaguered Williams team something to really cheer about by getting their cars through to the second phase of the knockout process and Racing Point’s gamble on only using medium specification rather than soft tyres in Q2 paid off, earning them a possible strategic advantage come the following day’s Grand Prix.

With Mercedes in a league of their own, it was a foregone conclusion that they would claim the front row on the grid, a 65th such lockout for the German team and a 90th pole position for Hamilton as he set a new track record. They were followed by the Racing Point and Ferrari duos, with Max Verstappen only seventh fastest and Alex Albon a lowly 13th as both suffered from balance issues with their Red Bulls. 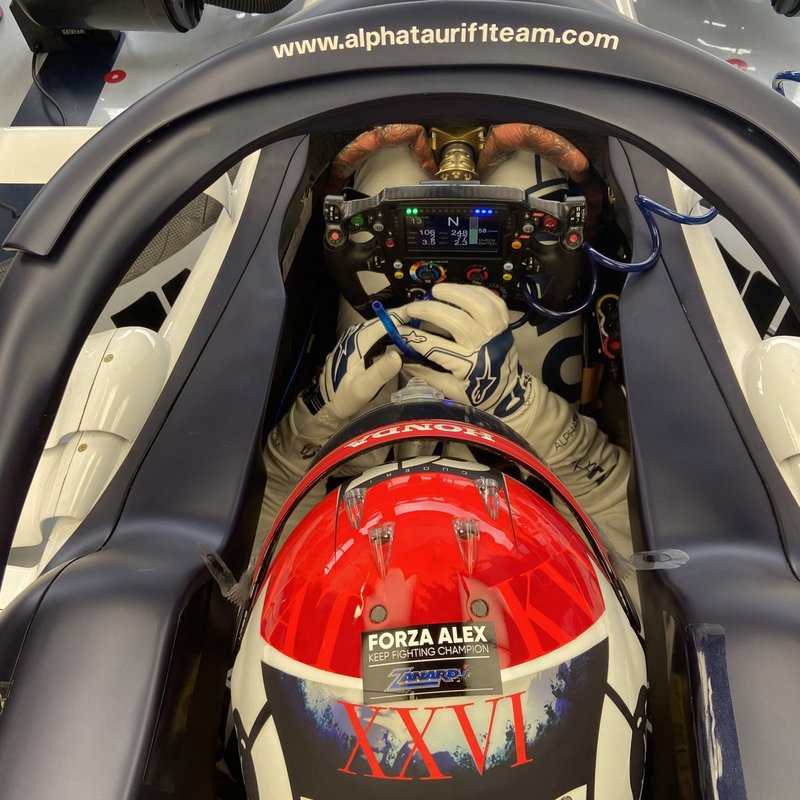 A quick peek inside Daniil Kvyat’s AlphaTauri “office“
Further rain meant the circuit was very much wet as the drivers circulated before forming up on the grid and Red Bull’s weekend went from bad to worse as the conditions very much caught Verstappen out. The Dutch charger speared off the track and into the barriers, removing his front wing and damaging the nose cone and front left suspension and steering components. After limping round to the grid the mechanics set to work on frantic emergency repairs, whilst there was again a mixed response from the drivers to Hamilton’s taking a knee Black Lives Matter message before the national anthem.

Fortunately for Verstappen his crew worked wonders and he was still able to make the race start, with most drivers using intermediate wet weather tyres. As the revs rose and the red lights went out Hamilton made an excellent getaway, whereas Bottas moved prematurely, stopped and moved again, dropping him down the order in contrast to Verstappen who leapt from seventh to third. Such was Hamilton’s pace that by the end of the third lap he was almost eight seconds clear of second placed Stroll.

There quickly followed a flurry of opening pitstops to switch to slick tyres, with Vettel losing out significantly whilst waiting for a gap in the pitlane traffic to rejoin the race. Bottas then started to climb from seventh to fourth place as his team-mate continued to extend his lead. As the half race distance marker started to approach a second round of pitstops followed and when Stroll rejoined the circuit he found himself demoted to fourth position behind Bottas.

With Hamilton well clear of second placed Verstappen, Bottas set about eliminating the gap to the Red Bull ahead of him before being called in for a third stop, a strategic move which was not replicated by the team from Milton Keynes. This left the Finn to try to close again on Verstappen, but in the end he got close but ran out of laps.

In the closing stages Mercedes knew Hamilton was far enough ahead that they could pit him again for soft tyres without Verstappen catching him and the British driver proceeded to claim the extra point for the fastest lap of the race as well as the 25 for victory. After his pre-race mishap Verstappen was delighted to finish second ahead of Bottas, appropriately calling his mechanics “legends”. 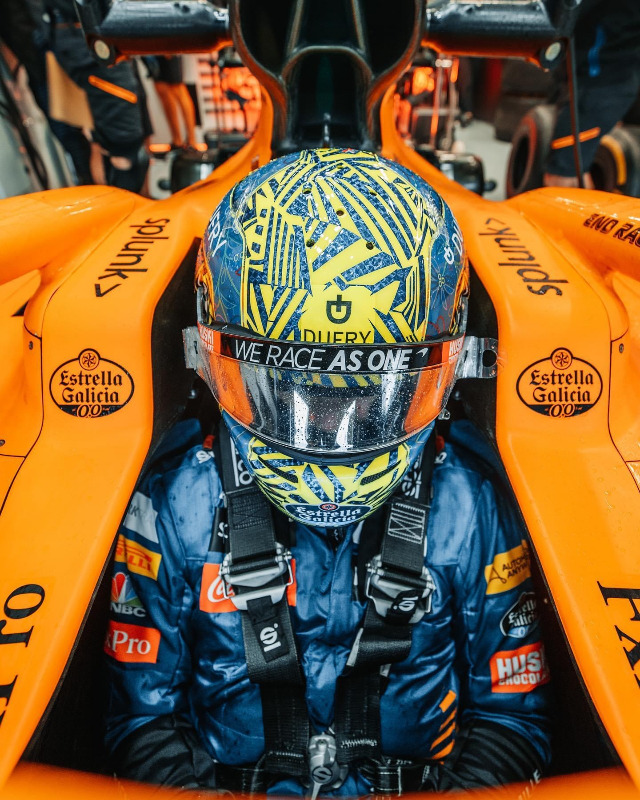 No heroics from Lando Norris in Hungary as he finished 13th
Racing Point picked up a decent points haul with fourth and seventh placed finishes, although such has been their improvement that this probably felt a little disappointing for the Silverstone based outfit. Albon was fifth for Red Bull, but his team was subsequently under investigation for allegedly drying the track surface near his car before the start, which is not permitted. Meanwhile Vettel had a better day, reaching the chequered flag in sixth place, whereas his Ferrari team-mate Leclerc had a troubled afternoon and ended up eleventh and outside the points.

After three races in a row F1 now takes a week off before reconvening at Silverstone in a fortnight’s time for the British Grand Prix, which will sadly have to be held behind closed doors too. A second race will also take place there just a week later, entitled the Formula 1 70th Anniversary Grand Prix due to the first ever championship F1 race having been held at the Northamptonshire venue back on 13 May 1950.

With the next four venues which Formula 1 is to visit (Silverstone, Barcelona, Spa Francorchamps and Monza) all being “power” circuits it’s difficult to see anyone challenging the superiority of Mercedes in the short term at least, but the fight to be the best of the rest is still highly entertaining.