This 10.7-mile route, not far from Harrogate, is easy to follow and takes in the huge variety of scenery and pathways to be enjoyed beneath the eerie but beautiful golf ball-like structures of Menwith Hill Camp.

It is a wonderful route, almost entirely flat but does call for waterproof footwear and, of course, OS Explorer Map 297.

It begins from the Stainburn Forest Car Park (nearest postcode HG3 1TQ, GR SE 236 522) at the corner of Norwood Lane and Broad Dubb Road. The car park does get busy at a weekend, with parking for up to about 30 cars. From the car park, walk a short stretch along the road (north-west) to join a way-marked path that crosses the fields towards Little Alms Cliff (also known as Almias Cliff) which is a distinct rock formation. Continue beyond the rocks to pass through a gate that enters the plantation. This initial path is very boggy in places and continues dead straight between the trees. After approx. 1km you encounter a path on the left which brings you to the edge of the plantation. Turn right at first opportunity (perhaps 15 yards) and continue for another 0.5km still among the trees on a distinct track. At the end of the trees, turn left then immediately right, pass through a gate to descend slightly across a field, mirroring the direction of the nearby wall.


Little Alms Cliff
The path re-enters the plantation (SE 213 511) and continues until meeting the road beneath. Opposite is another car park; turn left along the road (you can keep to the edge safely), then cross and bear right across a field, cutting off the loop of the road.


Norwood Edge Plantation
Re-join the road and continue downhill, passing several large properties. The road crosses water (Lindley Wood Reservoir), after which leave the road, turning right to join the riverside path. Follow the River Washburn upstream; it crosses once to the other side, then re-crosses at a ford (with footbridge) to become the Six Dales Trail. It will pass through a small patch of woodland and when the river takes a distinct right-turn, spot a scramble down the bank to some steppingstones (SE 189 517). Crossing here is possible (but likely you will get your feet wet!) so the alternative is to follow the river a touch upstream and lo-and-behold, there is indeed a sturdy bridge for an easier passage! 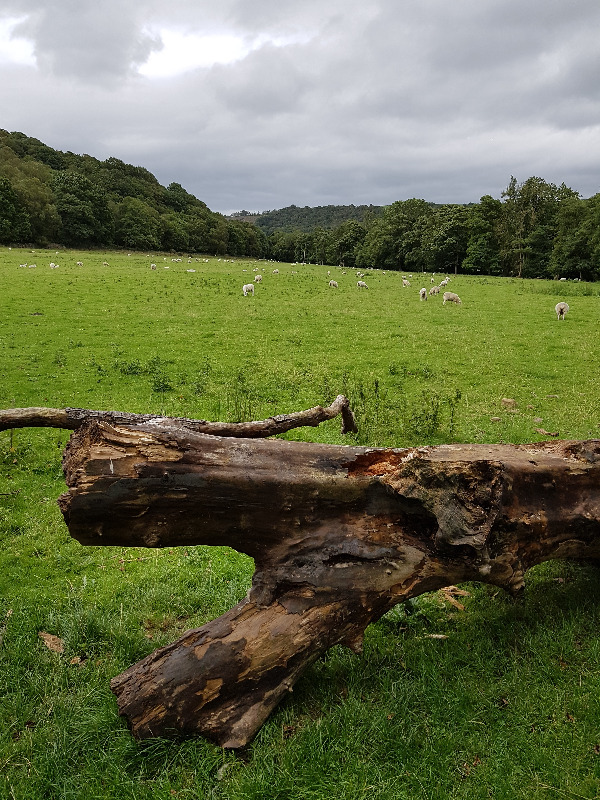 Keep the river to your left and continue upstream on the approach to Swinsty Reservoir. Beside the water you join the Harrogate Link path which curves along the edge of the reservoir and has several places to pause for a coffee or spot of lunch - there are several picnic benches.
Cross the road and continue on Harrogate Link; again beneath trees. The path turns right (it’s all straightforward) and emerging from the canopy, cross another field to meet a road almost opposite the Sun Inn at Bramelane. A gorgeous country pub; a stop for refreshments is recommended.

The Harrogate Link passes in front of the pub in a north-easterly direction. It initially keeps to a wall, then crosses the second field diagonally and passes beneath Bank End Farm along a track named Bank Slack. You see Beaver Dike Reservoirs up ahead and when almost level with the water, spot a path descending to meet a stile and track below. The track curves up to a large property and here is the site of John of Gaunt’s Castle – now just ruins within private land, but some is visible from the path.

The history is that this area was once the Forest of Knaresborough, a royal hunting forest. Haverah Park, in which the castle remains are located, was at the centre of the hunting forest and was created as a deer park in the late 12th century; into which game could enter but not leave. John of Gaunt’s Castle was built to be a hunting lodge, also acting as a royal residence and administrative centre when the grounds were in use by royalty.


Also by Caroline Spalding...
Norland Moor, Barkisland And The Ryburn ValleyReview: The Mission House By Carys DaviesReview: Orlando King By Isabel ColegateThe Border Moorland - North Of Denshaw From BuckstonesReview: Stranger In The Shogun's City By Amy Stanley
John of Gaunt (1340-99) was the third son of King Edward III and became one of the richest men of that epoch; the largest landowner in the north of England owning more than thirty castles and estates across England and France.

Continue straight beyond the buildings to cross between the two reservoirs. Turn right after crossing and keep to the track. This will come to the buildings and barns of Long Liberty Farm. Before the second large building, turn right and descend a touch, perhaps passing the cows in a small yard. Keep to the field edge and beneath, you join a gravel/tarmac track through the woodland which is marked as a permissive path on the map (orange dashes).

Simply keep on this easy track for the remainder – you will pass Scargill Reservoir and cross Scargill Pasture until returning to Norwood Lane, where it’s a right turn and short roadside walk back to the start.