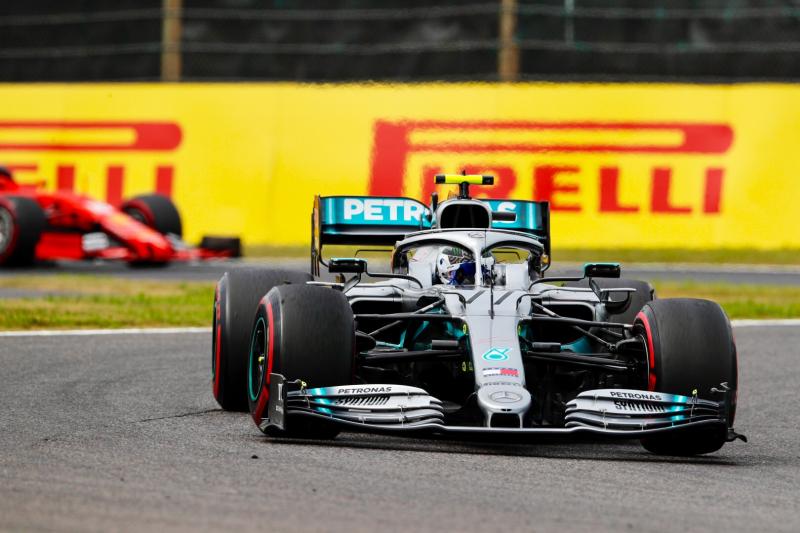 Valtteri Bottas flew to a dominant victory for Mercedes
After Ferrari had succeeded in handing a dominant 1-2 finish to arch rivals Mercedes in Russia at the previous Grand Prix, the F1 circus reconvened two weeks later at the iconic Suzuka circuit in Japan and, after super typhoon Hagibis had impacted proceedings, Valtteri Bottas proved to be untouchable as he blasted to victory in his silver flying machine and his Mercedes team sealed a sixth consecutive Constructors Championship title.

Racing drivers have always loved Suzuka’s demanding figure of eight track, which is 5.8 kilometres long and features 18 corners. 72% of every lap is spent at full throttle, more than at any other Grand Prix this year, and so it’s a real challenge for both man and machine.

Unlike some forms of motorsport, Formula 1 does continue even if it is raining, but the threat of high winds and torrential rain for the Saturday of the Grand Prix weekend posed too great a risk for the safety of all concerned and so an early decision was made to close the circuit for the whole of that day. Saturday’s usual final free practice session was cancelled and the qualifying hour was postponed to Sunday morning local time, four hours before the race itself. 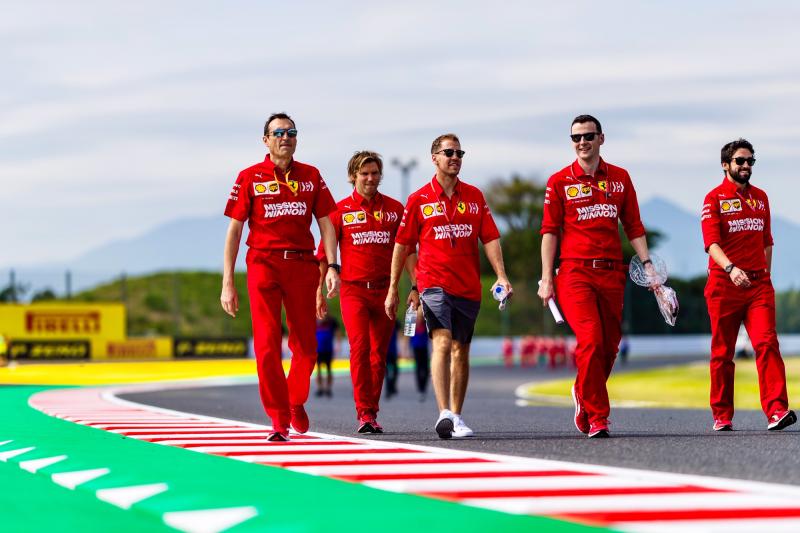 Sebastian Vettel (in shorts) walks the track with his Ferrari colleagues in the build-up to the Grand Prix
In Friday’s opening practice session Bottas had been marginally quicker than his team-mate Lewis Hamilton, with Ferrari’s Sebastian Vettel the best of the rest, if almost a second adrift. Come the second practice period later the same day Bottas again topped the timesheets ahead of Hamilton, Red Bull’s Max Verstappen and the Ferraris of Charles Leclerc and Vettel. All were aware that, if adverse weather were to force the cancellation of Sunday morning’s qualifying process, these second practice results would be used to form the grid.

The weather on Saturday was indeed wet and wild, but qualifying took place on Sunday morning and it was a case of two by two for the top three teams as Vettel and Leclerc claimed the front row of the grid for Ferrari, with Bottas and Hamilton just to their rear for Mercedes, followed by Verstappen and Alex Albon for Red Bull. 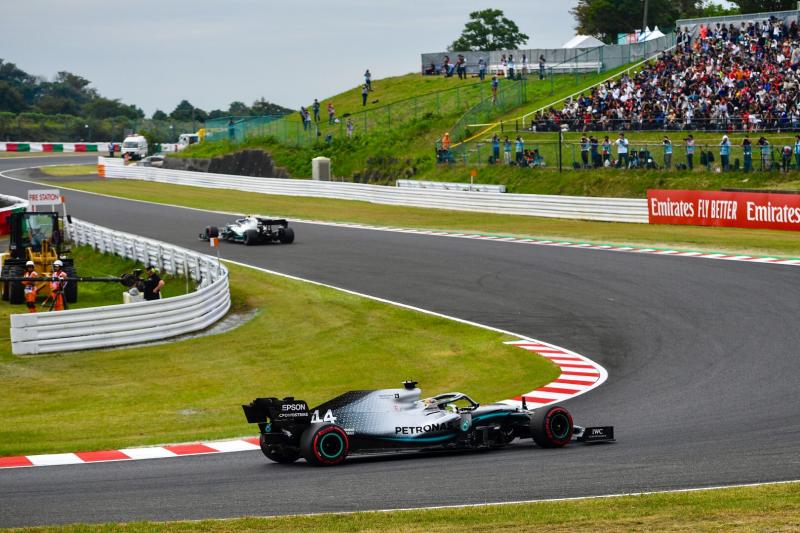 Lewis Hamilton had to settle for third place in his silver Mercedes
There was drama at the start of the Grand Prix when poleman Vettel started early and stopped before starting again, which allowed Bottas to sprint past both Ferraris into the lead. The German driver was subsequently investigated, but avoided any penalty for his slight misdemeanour due to the standard jump start tolerances applicable to all drivers on the grid.

Leclerc made a slow start and a charging Verstappen was right alongside through the opening two corners. At Turn 2 Leclerc slid wide into his Dutch rival’s car, forcing the Red Bull into a spin and subsequent retirement whilst the Ferrari suffered a damaged front wing.

The young Monegasque eventually pitted on lap three to have the damaged wing replaced and spent the rest of the Grand Prix recovering to sixth position come the chequered flag. He later received a five second penalty for causing the accident with Verstappen and a 10 second penalty for his team delaying bringing him into the pits to have the damage rectified, which demoted him to seventh position behind Renault’s Daniel Ricciardo. 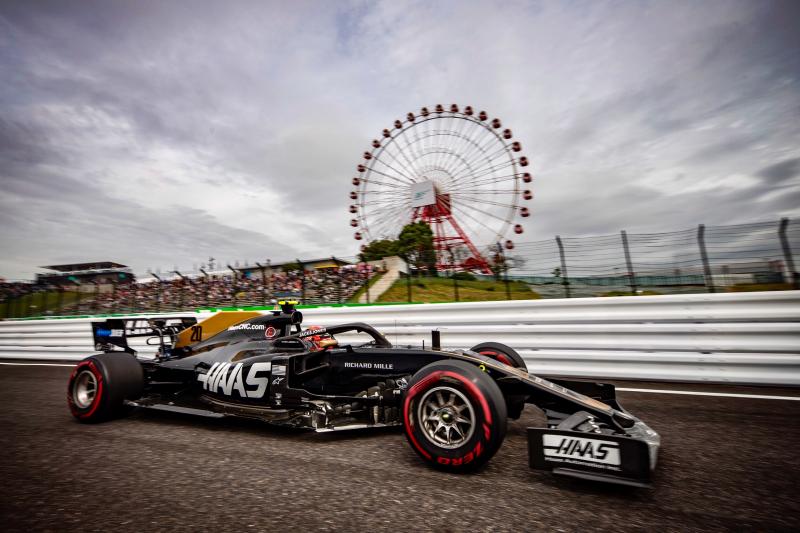 Kevin Magnussen’s Haas passes Suzuka’s famous big wheel
Out front Bottas was clearly quicker than second placed Vettel and Ferrari pitted the latter on lap 16, switching him to a two stop strategy. Mercedes responded by bringing Bottas in just one tour later to ensure the Finn retained the lead. Meanwhile they kept Hamilton out until lap 27 before changing him to a two stop strategy, which led to complaints over the radio from the multiple champion.

On lap 42 Mercedes pitted Hamilton again and this left him 10 tours to catch and pass second placed Vettel for a Mercedes 1-2. However, although Hamilton caught the German driver within three laps, the superior straight line speed of the Ferrari meant the longtime Monaco based driver had to settle for third position. A technical glitch which forced the chequered flag to be shown one lap early also didn’t help. 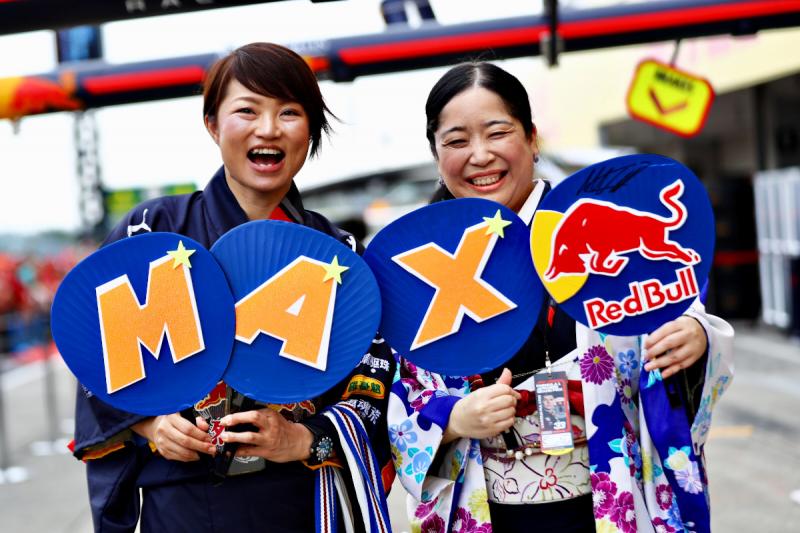 Red Bull’s Max Verstappen had plenty of support amongst the Japanese fans
With Verstappen out of the race, Red Bull honours were upheld by rookie Albon who drove superbly to claim a fourth place finish. Hamilton may only have finished on the last step of the podium, but he at least added the extra point for the fastest lap of the race to his day’s tally.


Also by Graham Read...
Mercedes On Top After The Opening Three Day TestAlfa Romeo’s C39 Completes The F1 Class Of 2020The Williams And Racing Point Formula 1 Car LaunchesAlphaTauri Makes A Striking Arrival﻿Mercedes’ 2020 Silver Arrow Breaks Cover
With Japan done and dusted for another year, it was time for all to head home to regroup and prepare to fly westwards for the next Grand Prix in Mexico a fortnight later as the season heads towards an almost certain further Drivers title for Hamilton. Only his team-mate Bottas now has a mathematical chance of catching him and Mercedes would probably manage the situation if need be to ensure its lead driver takes another title.

The German team has done a brilliant job, dominating both championships every year since 2014, but for Formula 1’s future health the sport has to become far less predictable and the new regulations from 2021 onwards really need to address this.