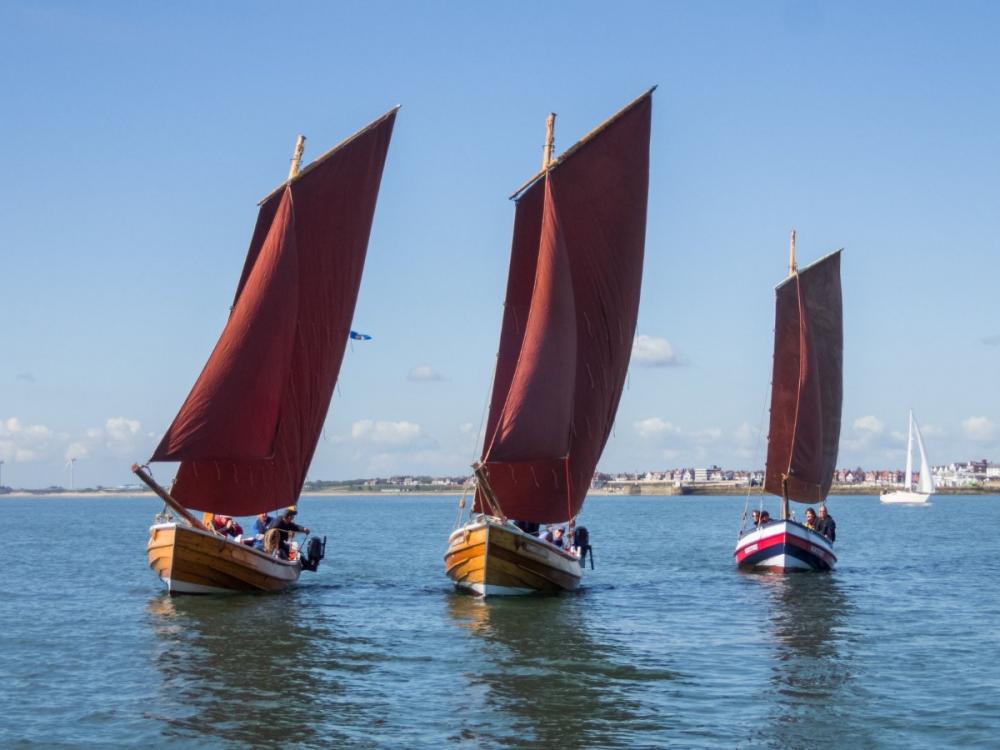 Bridlington cobbles
If you walk down Harbour Road in Bridlington, past the fish and chip shops and ice-cream parlours, you’ll chance upon a banner advertising the town as ‘The Sailing Coble Capital of the World’.

For me it’s the beginning of a trail that leads me to witness a coble being restored, and to learn about a half dozen more, whose trademark tawny red sails can occasionally be seen in local waters. I also come across an amazing love story that would not be out of place in one of those true romance magazines.

The Harbour Heritage Museum, a hidden gem, is a fascinating place celebrating the days when the town was better known for fishing and boat building than for tourism. It’s the home of the Bridlington Sailing Coble Preservation Society, but their prize exhibit is actually moored in the harbour. It’s the Three Brothers, a fishing coble fully restored in 2013.

She was built in 1912 for a local man, Robert Crawford, and named after his three sons, William, George and Abraham. In 1920, she had an engine fitted and began a nomadic existence that saw her move first to Whitby before seeing service as a ferry, in Middlesbrough, then returning to Bridlington in 1960. 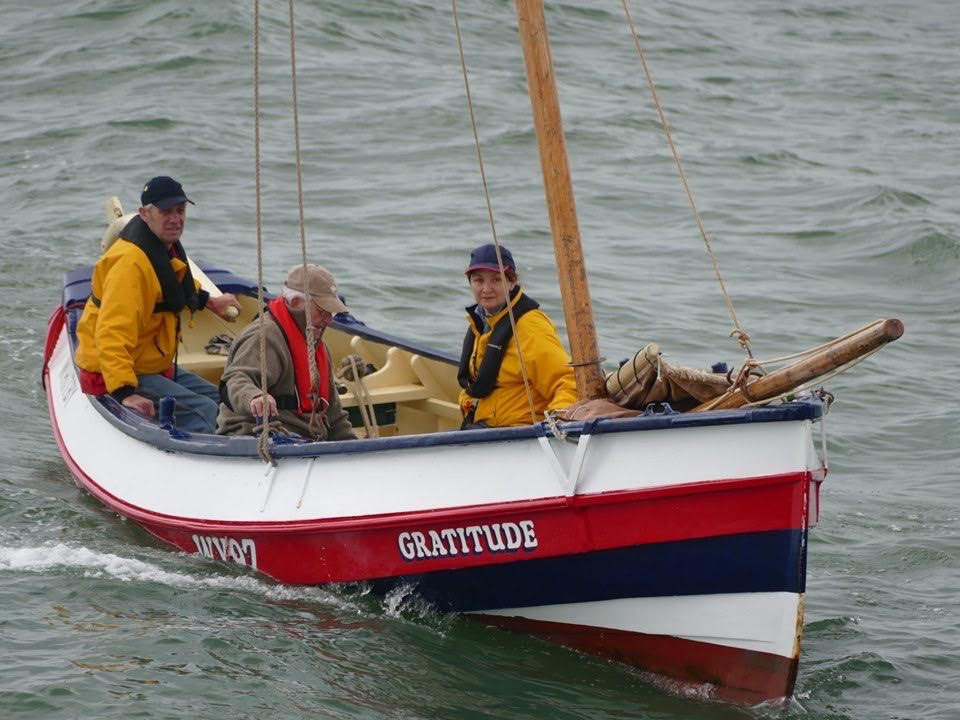 Julie Coultas at the helm
The Bridlington Harbour commissioners had the commendable foresight to buy her in 1983, when she was restored to sail by Harbour shipwright Frank Taylor, under the supervision of the Harbour Master George Wallis, and placed in the care of the Bridlington Sailing Coble Preservation Society, who have maintained and sailed her ever since.

Further major restoration was carried out by John Clarkson and Joe Gelsthorpe, assisted by Society members over the winter of 2012-2013. A boatyard in Lincolnshire had quoted a price of £67,500 for the restoration which was far beyond their means. "So I came out of retirement after thirty years away," says John. "It was like a jigsaw puzzle, we had to take planks off, put new ones on, completely rebuild her with roves and rivets from the waterline up." 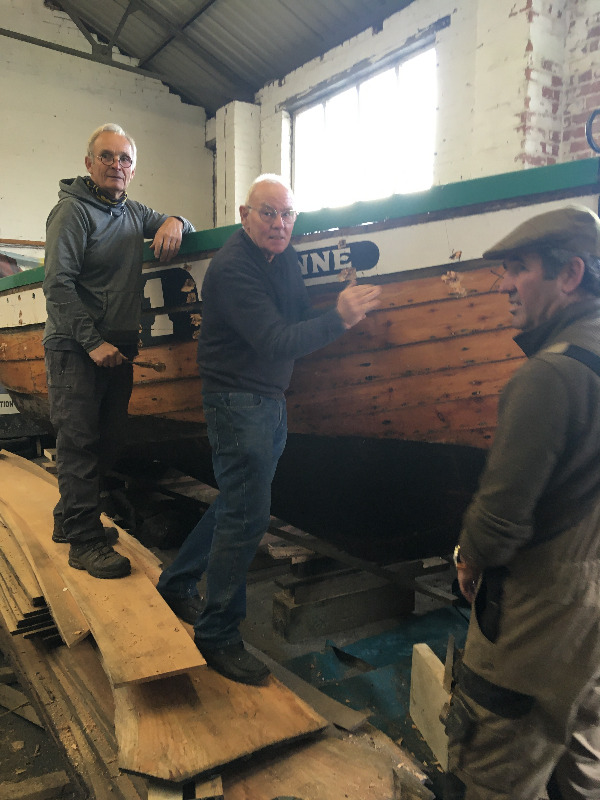 John Clarkson at work
I find him still hard at work, in the warehouse, recently acquired at the top of Beck Hill. A boat builder by profession, apprenticed in the 1970s, he’s currently restoring two boats, Anne, and Kathleen, both of which he describes as in far better shape than the Three Brothers had been.

At the moment John has got three Society members helping him and he is keen to impart skills which are in danger of disappearing. "We’re always looking for young people to train up to keep coble building and restoration alive."

Today, Bridlington Harbour is home to the largest shellfish fleet in the country landing mostly crab and lobster for markets all over the world. Gone are the days, within living memory, when big fleets sailed to distant waters to trawl for haddock and cod. Before the trawlers, local fishermen favoured the smaller craft.

The coble, found all the way down the East Coast from the Scottish border to Spurn Head, was generally constructed by local builders and without plans, but with a skill that developed over generations and may even date back to Viking times. They were clinker built and varied in design depending on local conditions and preferences ,but the overlapping wooden planks, John explains, are undeniably reminiscent of Viking long ships. Like those, a coble could be rowed if there was not enough wind for its single sail.

Anne, is not technically a coble but a close Scottish cousin, a scaffie, with long raked bows and stern, again pretty obviously of Scandinavian design, suitable for stormy waters and sailing into the wind. The other boat under restoration is Kathleen, a Northumberland coble, owned by the Society’s secretary, Julie Coultas and her husband.

And here comes the love story. They first met off Flamborough Head in 1974, introduced in a manner of speaking by Dennis – the coble they found themselves aboard. They got back together a couple of years ago having re-acquainted and spent the day at the annual Bridlington Coble Festival. "We got bitten by the coble bug and knew we just had to own one." Once married, they began a protracted search and, to cut a long story short, managed at the eleventh hour and after a series of mishaps to save Kathleen from being broken up for scrap.

She was built in Seahouses in 1949 by Dawson and Beverley for a Boulmer fisherman and used as a salmon coble. "We both fell instantly in love with her as soon as we saw her,"Julie continues. "We’ve stripped the paint off her, primed her and John is now replacing the rotten woodwork." Husband Ian, a mechanic, has checked and serviced the engine. They hope to have her in the harbour in time for the next festival, in July 2021.


Also by Andrew Liddle...
Doors Opening For The Georgian Theatre RoyalAnd Then There Were TwoMeet Magic Rock's Christa SandquistSunak Is A Bit Of A DragRadio Gaga
In the early 1800s, there were notable shipbuilding businesses in Bridlington and armed brigs were constructed during the Napoleonic wars. The railway’s arrival in 1846 brought to an end the weekly passenger service to London by sea, stimulating the growth of tourism but also unfortunately the decline of shipbuilding. By 1872, there were only three locally built big ships still in use where fifty years earlier there had had been around 150.

There were still lots of cobles and with the development of motor engines just after the First World War, many were given power. The pleasure trips around the bay continued but even fitted with engines cobles were unable to compete with the bigger ships offering longer trips, and inevitably fell into decline.

Around 500 are thought to have been constructed in Bridlington, most from 1890 onwards by Siddall & Son, founded by Baker Siddall, the son of a ship’s carpenter. He and his brother, George, opened a boat workshop in Bow Street, and Baker’s son Percy, began his apprenticeship aged only 12. Grandson, Jack, also later joined the family affair and with his death in 1972, the business finally closed.

The Three Brothers, beautifully restored, is the last known in existence to be the work of the Siddalls, a classic example of a Bridlington coble. "They were bigger, 38-40ft in length," John tells me, "bigger than most built in other parts of the Yorkshire coast, although they’re mostly rigged the same, with dipping lug and fore-sails."

What a truly magnificent sight a fleet of cobles must have been with their burnished hulls skimming across the whitecaps, their billowing sails scarlet in the sun. Fortunately, it is still possible to get a sense of the experience when the Bridlington Annual Sailing Coble Festival, organised by the Society, brings a number of them sailing together again. The Society’s own publication A Spotter’s Guide to Cobles, lists no fewer than thirty to be seen on the Yorkshire coast.

Three Brothers is still owned by the Bridlington Harbour Commissioners although she is sailed and maintained by the Society which also boasts two others, Gansey Lass and Free Spirit, identical sailing vessels, built by John Clarkson and Joe Gelsthorpe in 2014, to demonstrate to the world the art had not been lost. "There’s a few more the Society has got its eye on," John tells me with a twinkle in his. "We might have a whole fleet before long."

"This of course all takes a good deal of money and the Society welcomes donations," Julie adds quickly with a smile. "Every little helps to keep this great tradition alive."