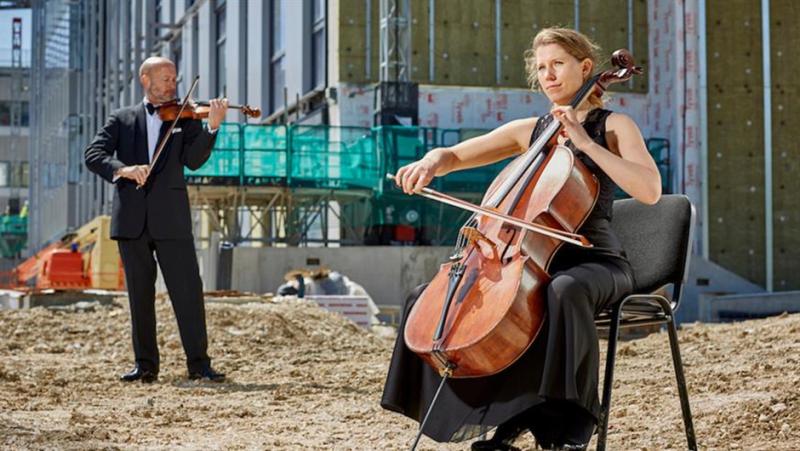 One of the world’s leading cancer research organisations, The Institute of Cancer Research, London has teamed up with the Royal Philharmonic Orchestra (RPO) to create a beautiful new piece of music with a twist – it has been left deliberately unfinished.

Entitled ‘Let’s Finish It’, the unfinished symphony abruptly cuts to silence three-quarters of the way through – symbolising the unfinished state of a building being created by the ICR to spearhead efforts for new cancer cures.
The Institute of Cancer Research (ICR) Centre for Cancer Drug Discovery will be one of the world’s most important buildings, and will house the most successful academic cancer drug discovery scientists. However, the building needs an additional £15m in donations to be completed and for scientists to be able to start their urgent work in ending the scourge of cancer.

If the building is finished, hundreds of scientists from different disciplines will come together to lead an unprecedented ‘Darwinian’ programme that will aim to overcome cancer’s propensity for evolving resistance to drugs, and ‘herd’ it into more treatable forms. This could turn cancer into a manageable disease that may be controlled long-term and effectively cured.

The ICR has commissioned Callum Morton-Huseyin, a 25-year-old emerging contemporary classical composer, to create an original piece of music and Britain’s national orchestra, the RPO, to perform it. The music is inspired by the incomplete building itself, the efforts of researchers to outsmart cancer’s evolution, and their currently unfinished business in defeating the disease.
The sections of the unfinished symphony are based on the ICR’s efforts to understand the way cancers change and evolve, with the highs and lows of the music reflecting the historic successes and frustrations of cancer research. As the piece progresses, the music takes an upward turn, reflecting the building’s construction, the ICR’s science and the game-changing future discoveries that could overcome cancer’s evolution.

However, around three-quarters of the way through, before the contemporary classical symphony can reach its most optimistic heights, the music abruptly concludes. The remaining minute of the track plays in total silence – a musical metaphor for the current unfinished state of the cancer research building.

The music will remain in this unfinished state until the ICR’s building has received the funds it needs to be completed. At this point, the composition will be finished by Callum and the RPO, before becoming the official anthem for the completed Centre for Cancer Drug Discovery.

Dr Olivia Rossanese, who will be Head of Biology at the ICR’s Centre for Cancer Drug Discovery, said: “There will be no other cancer research building like this in the world. We’ll have computational biologists, geneticists, evolutionary scientists and drug discovery researchers all working hand-in-hand in an unprecedented way to find new treatments that can overcome cancer evolution and drug resistance. It has the potential to completely change everything we thought we knew about cancer treatment, but firstly, it needs to be finished. The unfinished symphony beautifully highlights the importance of raising the final £15m so we can get to work on this exciting new area of research.”

Callum Morton-Huseyin, who composed ‘Let’s Finish It’ for the ICR, said: “I am immensely proud to work with the Royal Philharmonic Orchestra on this fundraising campaign to finish this incredibly important building. I was inspired by the stories of all of the amazing professionals who work tirelessly and ingeniously to defeat cancer, and the music reflects the promise of the building in which they will do so. Just as in my music, there are ominous moments in the journey to defeat cancer but I look forward to writing the triumph of hope and innovation. However, the apex of that final crescendo is not yet within reach - I’m eager to return to the studio and write a rousing ending to celebrate reaching the building’s funding goal. This music comes out of the inspiring stories of all those working hard to end cancer, and together we can finish it.”

The currently unfinished anthem will be available on Soundcloud from Thursday 6th June via: https://soundcloud.com/user-156109396. To donate to the new Centre for Cancer Drug Discovery, visit the page here: ICR.ac.uk/unfinished