Conveyor Belt Education Or The Kindling Of A Flame?

A personal view on Standard Assessment Testing from a retiring teacher.

There are now ten working days left before my metaphorical mortar board is hung up in the cupboard for the last time … and I feel like getting something off my chest. 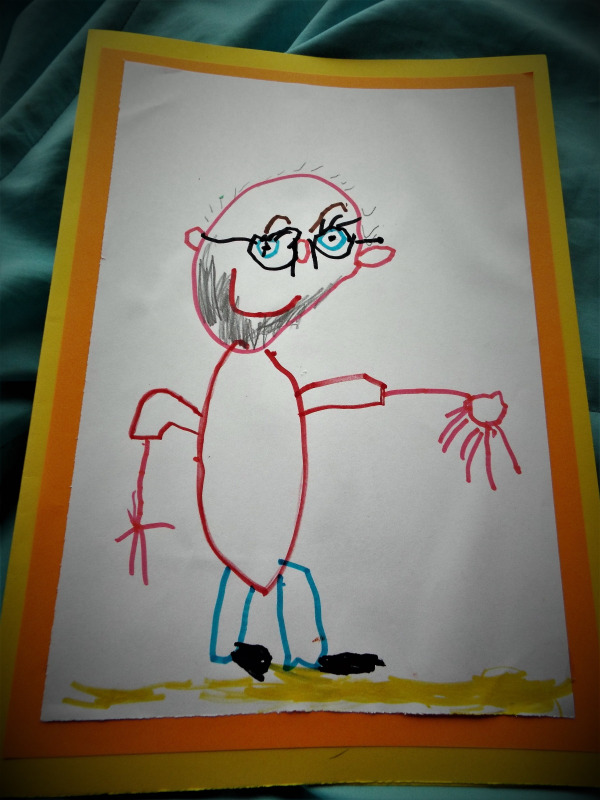 Picture by Alfie (age 6)
I have many happy memories of working in schools as a teacher and deputy head. In my time I have known and worked with lots of people and have taught many hundreds of pupils, including the children of ex-pupils.

There have been numerous rewarding and fulfilling events over the last three decades: involvement in writing, producing and singing in the Making Music performances with thousands of children from over thirty schools at Kendal Leisure Centre; steering the school through the International School Award with international chess games, the Landmark competitions, links to over forty schools worldwide and the International Woodland Project involving schools in the USA.

I have taken part in residentials almost every year with the year 6 children at places like Kepplewray in Broughton in Furness, the Eden Valley Centre, Hawse End by Derwent Water with Cumbria Outdoors and urban experiences at Sheffield, Bradford and Liverpool.

I have worked on helping my last school become affiliated with The Adventure Schools in Cumbria Scheme, with so many year 6 children achieving their John Muir Awards, and the trips to places like Tullie House, Ribblehead Viaduct, Stott Park Bobbin Mill, the Manchester Museum of Science and Industry, expeditions to the source of the River Kent up Kentmere Valley, involvement in tree identification and preservation with the Woodland Trust at Beckmickle Ing, bird watching and minibeast identification at Leighton Moss.

I have coached children in many sporting events, participated in projects delivering Kendal Youth Radio, the involvement in commemorating the work saving Jewish children in the Windermere Project and the Music In Nature work … I could go on.

It is these projects, activities, experiences and the memories of how much the pupils benefitted from their involvement in such relevant, worthwhile and meaningful work that I am proudest to have had a part in delivering and which I will miss dreadfully when I leave at Christmas …

The one aspect I will not miss, and which has blighted almost all of my time as a primary school teacher, is the accountability and testing process imposed on schools by politicians who, with little or no expertise, have interfered in matters of education with ill-thought out initiatives resulting in a narrowing of the curriculum, the reduction of educational standards, the increase of stress and ill-health among all engaged in the learning process and the exodus of experienced staff over a number of years. Schools need to be accountable but the system we have at the moment is simply not fit for purpose and needs looking at seriously with reform in mind.

Let me expand on this …

Once upon a time in the UK, Standard Assessment Tests in schools were designed to assess children’s academic progress in the core subjects. SATs were introduced in phases, starting in 1991. By 1998, there were tests for seven, 11 and 14-year-olds. They were supposed to assess whether a pupil had reached the average level for their age. Over the years, they have become a quasi-qualification, that children are coached/trained to pass so that the league table positions of schools are maintained/improved and to keep OFSTED from swooping early if the data isn’t up to ‘standard’. In addition to this, they were used as a political tool to ‘encourage’ state schools into the academy system.

The culture that developed since SATs and secondary school exam results data became the basis for league table placement and the focus of Ofsted inspections, resulted in a narrowing of the curriculum (particularly in primary schools) and discrimination against so-called ‘failing schools’. What is now taught in some schools is driven by how it looks to outside agencies and not based on sound educational principles. The additional problem with the inspection process is the lack of consistency between Ofsted inspectors. Fundamentally, it became a lottery and schools were at the mercy of the particular foibles and eccentricities of the lead inspector with whom they were landed.


Also by Jonathan Humble...
Poetry And The Addicted Serial SubmitterReview: Keepsake By Kayleigh CampbellGoole Revisited: Diary Of A Wild Urban ChildReview: Impermanence By Colin BancroftReview: Wish By Katerina Neocleous
On top of all this, the National Curriculum which was championed by Gove and Cummings during their time of influence in government, ignored all advice that came from Sir Jim Rose’s independent review of the primary curriculum in 2009 (before the Tories came to power).

“the new curriculum must be underpinned by an understanding of the distinct but interlocking ways in which children learn and develop – physically, intellectually, emotionally, socially, culturally, morally and spiritually – between the ages of 5 and 11 … a well-planned, vibrant curriculum recognises that primary children relish learning independently and co-operatively; they love to be challenged and engaged in practical activities; they delight in the wealth of opportunities for understanding more about the world; and they readily empathise with others through working together and through experiences in the arts, literature, religious education and much else”.

This advice (and calls to develop a ‘creative curriculum’) was immediately dismissed by Gove and Cummings in favour of a cycle of teaching facts, testing (including children at 5 years), harsher inspection frameworks and more pressure on schools to meet ever higher targets. Gove’s curriculum was opposed by 100 academics, (labelled as “The Blob”, “Marxists” and “Enemies of Promise”) who wrote to warn of the dangers posed by Gove’s ideas. During Gove’s tenure at the Department for Education, there followed years of denigration and undermining of the teaching profession, re-direction of funding into the free school and academy coffers, years of goalpost shifting during increasingly draconian Ofsted inspections and an unprecedented vote of no confidence in Gove from the NAHT, the NUT and the ATL.

In my opinion, Mr Gove’s brainchild was never a system designed to improve educational standards, but one that looked good on the wall charts of politicians and their lackies, and was used along with Ofsted inspections as a stick with which to beat teachers and control schools if they didn’t toe the line.

Socrates said that Education is not the filling of a vessel but the kindling of a flame. Under the Tories it has become a sausage factory production line. In this time of upheaval and weirdness resulting from the global pandemic, I notice calls surfacing for the suspension of SATs due to the unfairness of such a system during the stresses and strains of COVID 19. The unfairness has been growing for over a quarter of a century now … it is high time that SATs, Educational League Tables and Ofsted were consigned to the dustbin of history where they undoubtedly belong.