Custody Of The Eyes: Like A Tree Cut Back By Michael McCarthy 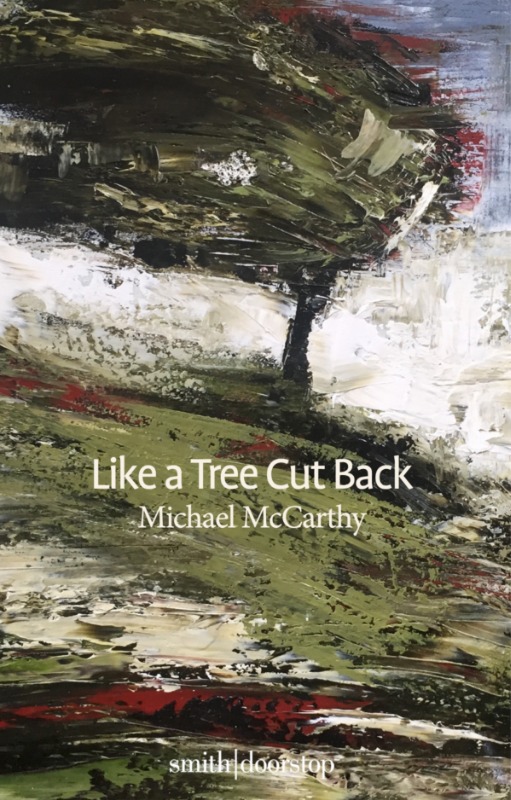 It is a rare thing to find an Irish catholic priest turning his hand to the writing of a memoir; more difficult still to imagine the demands of a vocation not getting the better of artistic impulse. But, in Like a Tree Cut Back, Michael McCarthy leaves us the fine autobiographical legacy of a life lived according to the principles of his faith, whilst giving free vent to an unusually sensitive imagination and an ethical schema informed as much by fellow feeling as by empathy.

Michael McCarthy was born in Cork, educated at Carlow Seminary, and spent the last decades of his life ministering to his flock in North Yorkshire, before his death in 2018. A published poet, it is no surprise to find passages of heightened lyricism, and examples of found poetry, in this, his final work from smith|doorstop.

His earliest memories, captured, in the opening chapters in the first person and written with the wide-eyed, naïve wonder of a child, are given a bucolic immediacy redolent of Laurie Lee. The loving bonds that tie the young Michael’s family and neighbourhood in a tight, self-sustaining knot are rarely undermined by the poverty and hardship which are described in uncommonly authentic detail, but which remain semantically extraneous to the realm of personal insight: widely shared impoverishment is only infrequently recognised as such by those who experience it, as Sean Connery said of his early life in a Fountainbridge tenement.

McCarthy, as child, is a revelation of innocent observation: the landscape which unfolds around him - the fractious exchanges, the social mores contravened, the invisible architecture of adult culture – is described accidentally, as it might, from the mouth of a nine-year-old. We learn of adult contradiction, of irony and of loss through the medium of juvenile disinterest. And if the nascent McCarthy is occasionally overwhelmed by anxiety and fear, it is convincingly drawn: the misguided magnification of problems, the tender ministrations and occasional admonishments of his mother and father are skilfully woven into the boy’s own words, in a kind of confessional. The shadow of his brother’s early death hangs over McCarthy’s narrative, and if the cause is only vaguely hinted at, the snatches of intimation which follow unsettle the young boy in perpetuity, occasioning an internal rupture which is only healed many decades later on an extended, meditative sabbatical in Canada.

Michael McCarthy
A sense of naturally evolving integrity is a defining characteristic of the child’s early years and it is somehow unsurprising to find McCarthy’s near seamless absorption into the fabric of Carlow College conducted in a spirit of humility. The descriptions of Carlow’s long history – as seminary and as mainstream university – place the priest, and the writer’s, life in the context of an Ireland still in institutional thrall to Catholicism. But more significantly, they counter the embryonic inflexions of the early narrative with a near documentary retelling of that history, which typically, and unselfishly, subordinates the autobiographical ‘I’ to the ‘We’ of passionate, collective endeavour. Minimising an examination of his own time at Carlow, McCarthy chooses to refocus his lens to compass the structure that nurtured him.

Not least through an examination of the lives of those alumni who went on to shape the wider world. McCarthy’s admiration for John Joseph Therry, whose zeal owed as much to an extraordinarily heightened sense of injustice and inequality as religious fervour, is unalloyed. Therry’s ‘mission’ to Australia is exemplified by a stubborn refusal to accept the prescribed limitations of his senior role in the development of a new ministry. Focussing instead on extreme individual hardship – the condemned prisoner, the unfairly treated immigrant – Therry’s motivation is human and entirely selfless. Reinventing transcripts of letters between several of the major players of the early colony as ‘found’ poems, McCarthy breathes life into this ‘apostle of Australia’, an exemplar of Carlow’s worthiest legacy, who remained ready, always, to censure his own interests for the sake of those of others:

‘Who better to stand up for those deprived of justice,
Birth-right, loved ones, Religious Faith itself, and who
Languish in a hostile climate ten thousand miles away? (‘Student Report’)

The stylistic simplicity of his prose yields a neat counterpoint to the tender, aching lyricism of the poems, which give shape to a predilection for contemplation and yearning. Giving emotional heart to the sometimes witty, often earnest, always candid, descriptions of McCarthy’s various ministries in the declining industrial North, his poems transfigure experience, finding beauty in the hitherto prosaic, and reconciliation in the acquisition of a facility for reflection. In the Alpine scenery of Lauterbrunnen, McCarthy discovers an indivisible connection between breathtaking scenery and an aesthetic of divine acceptance. Coming upon a vision of Christ in a mountain wilderness, the apostle John effects his own epiphany:

‘And in the silence: the tenor voice of small streams,
the far-away bass of the waterfall,
a single bird-note, and among them
the word Beloved.’ (‘Transfiguration’)


Also by Steve Whitaker...
Poem Of The Week: 'In Memory Of Jane Fraser' By Geoffrey Hill (1932-2016)Poem Of The Week: 'Edwardiana' By Geraldine ClarksonPoem Of The Week: 'Italy Vs. England' By George Gordon, Lord Byron (1788-1824)Flags And Flowers: These Mothers Of Gods By Rachel BowerPoem Of The Week: 'Utah' By Anne Stevenson (1933-2020)
Michael McCarthy’s clear mandate to make a difference, according to the dictates of his own conscience, and with a profound commitment to a life of integrity, is never better illustrated than in his magnificent poem of love, restoration and hope. Dissolving the impulse for unconditional maternal love in the balm of natural metaphor, ‘The Gift’ achieves another form of spiritual healing, in words no less transcendent, or personal, than those of Wordsworth:

‘It crept across the shadows of trees
through the open skylight
into the bedroom of the boy
while his memory lay sleeping.

It came, she said
touching the space between his eyebrows,
fixing in his dark dreams
the broken axle to the wheel’.


Like a Tree Cut Back is published by smith|doorstop