Defender Delights In A Smaller Package 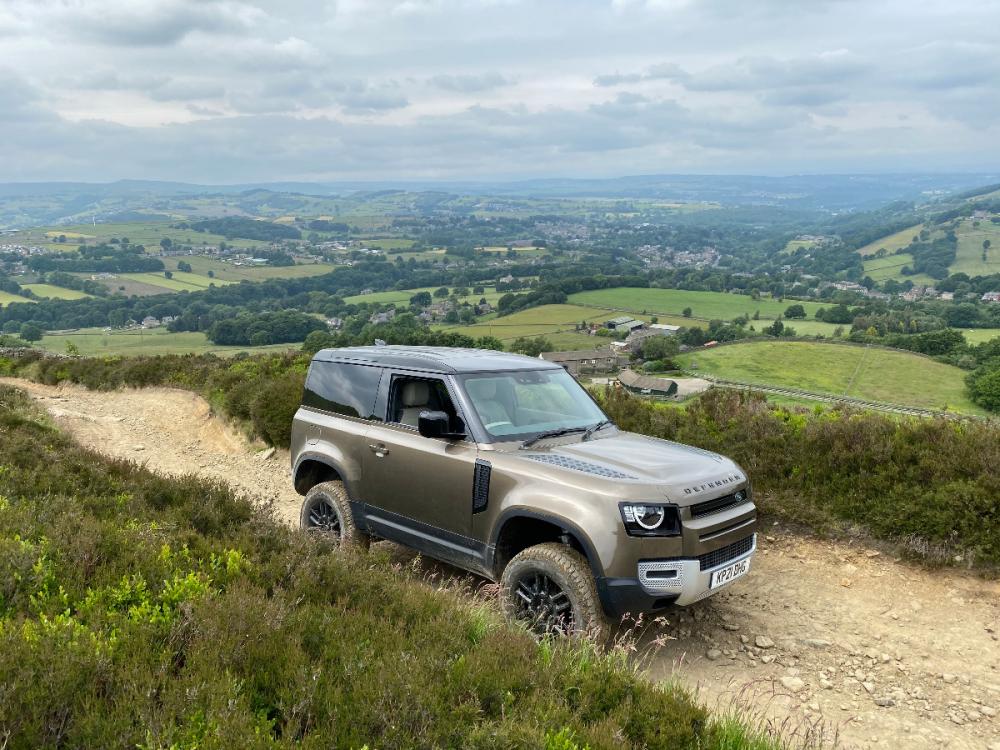 How do you reinvent an icon? This is something that has vexed the good folk at Land Rover for many a year. The much-loved old version had clearly reached the end of its life, though good examples will be sought after for ever and a day.

A vehicle with global appeal was clearly required, something far more modern, yet just as capable in extreme off-road conditions. Most will tackle nothing more challenging than a muddy field or a snow-covered driveway and then there are the challenging kerbs outside Waitrose to contend with.

Land Rover unveiled the new Defender at the last Frankfurt Motor Show, and I was there to see the covers come off. Undoubtedly the star attraction, the general consensus was that chief designer Gerry McGovern had done a good job. 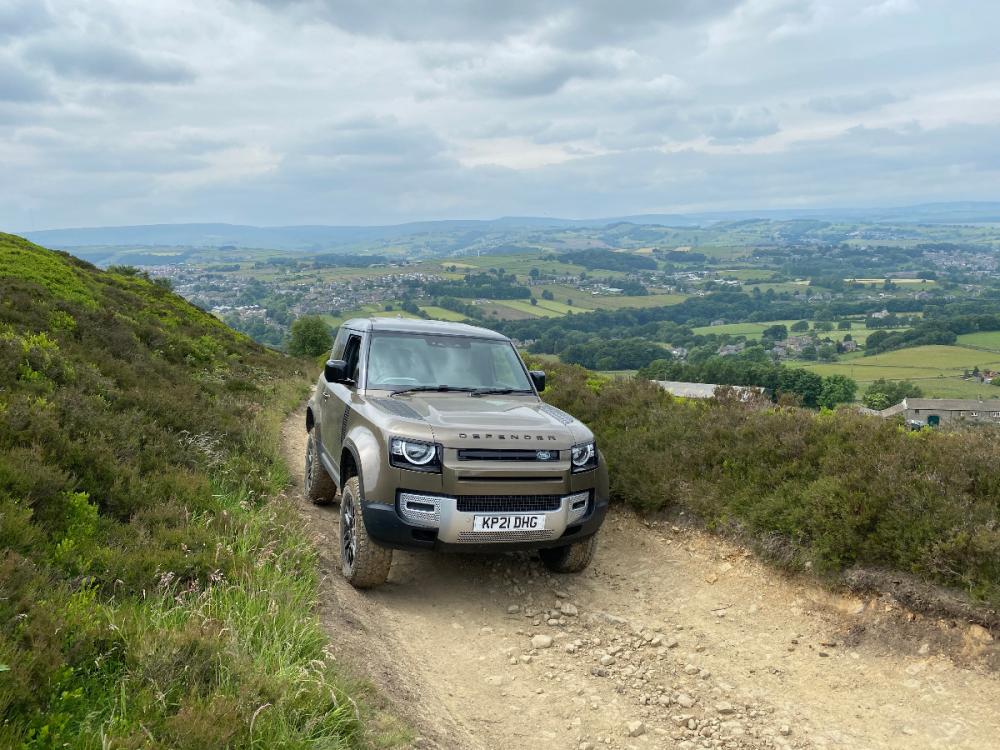 The old Defender was unstoppable off road, but let’s just say it was less adept at dealing with the cut and thrust of everyday driving. I drove many and owned a Series 2a, so I speak from experience…

My plan with the Defender was to put it to the test on many of the green lanes that crisscross the north of England and there was no one better than my good friend and fellow scribe, Damian from the Mudlife magazine, to lead me astray! 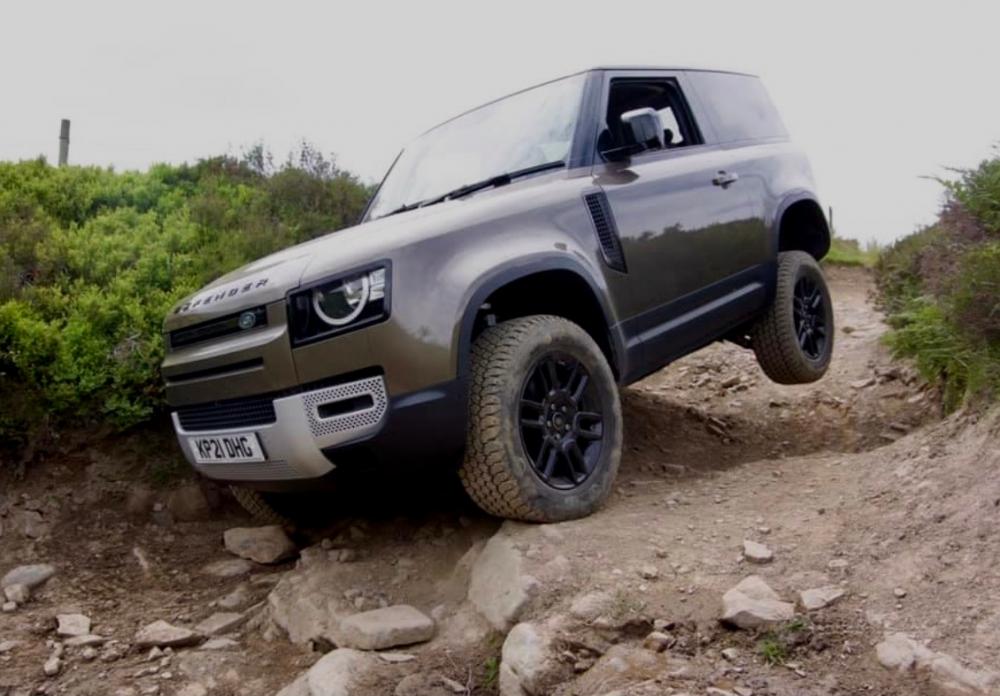 We met near Oldham, the plan being to travel east via an assortment of lanes, ending up in Holmfirth for food, drink and a natter.

Before setting off I was pleased to note that amongst the test car’s optional extras were the Air Suspension Pack, Electronic Differential and Off-Road Tyres. All three were to be put to good use.

Over the course of the tiring, yet exhilarating day, we completed a wide variety of tracks. Some posed little challenge to the Defender’s abilities but instead rewarded us with fabulous views of the Lancashire and Yorkshire countryside. 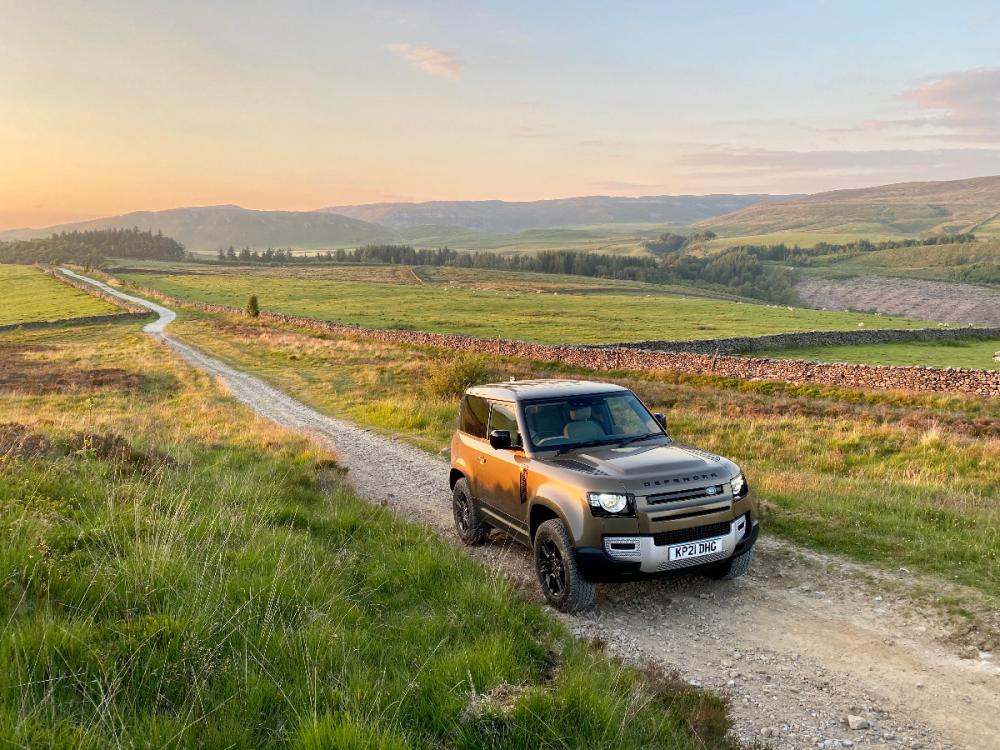 However, there were some that required some serious reconnoitring before setting off. Had I been on my own, I would have turned around. My guide however assured me that one particularly gnarly stretch would be simple enough, even though I struggled to walk it, such was the terrain.

With suspension raised, low range and ‘rock crawl’ mode selected, the Defender made it all look so terribly easy. In fact, with the desire for interesting photographs, I was invited to reverse back up the obstacle and pause when things got ‘interesting’.

If there is a chink in the Defender’s armour, it is perhaps its width, which did require a few breathe in moments. 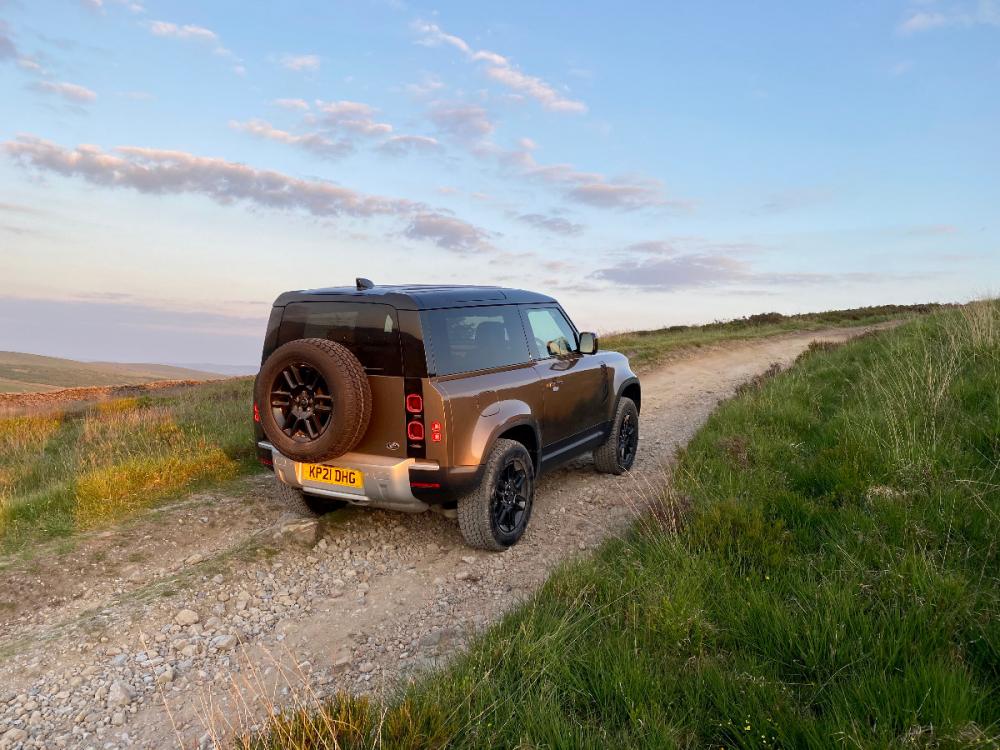 Back on terra firma, I can report that high-speed cruising was pleasantly hushed, the ride yielding yet not to the detriment of cornering prowess. Chuck the new Defender at a series of challenging bends and it copes admirably, almost defying its blunt shape and high centre of gravity. There’s no doubt the ‘90’ feels more wieldy on the road. The steering is nicely weighted too.

Performance from the powerful diesel engine is suitably brisk and it works well in conjunction with the smooth eight-speed automatic gearbox. There is no manual option – it will not be missed.

Expect around 30mpg, not bad considering the bluff shape and weight of the vehicle. 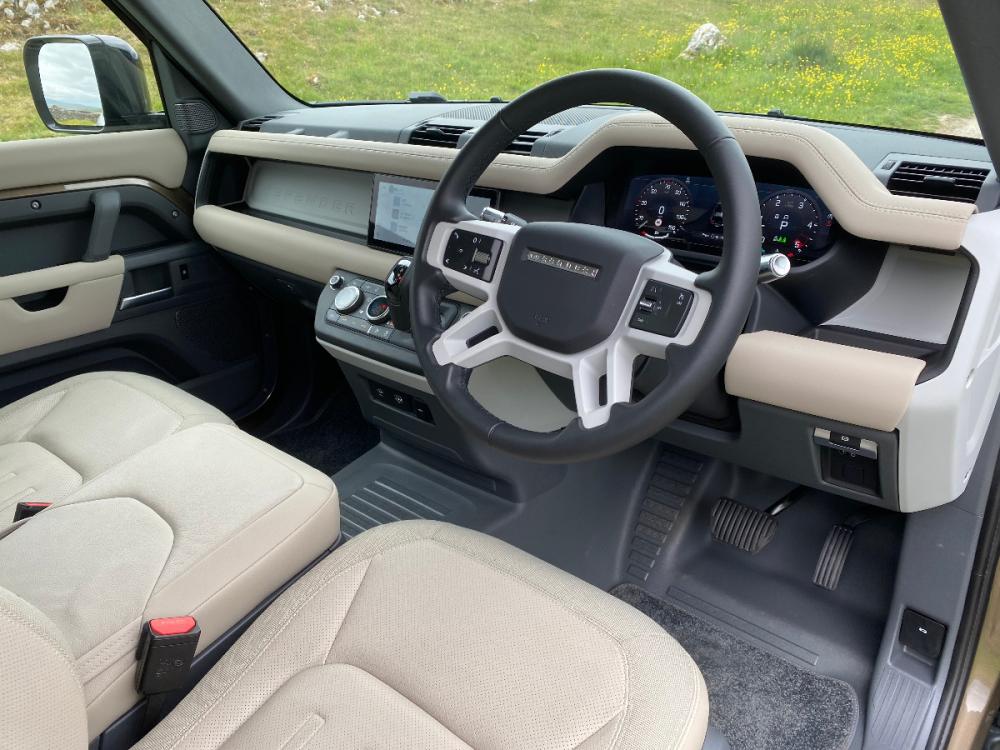 In short-wheelbase form, the Defender boasts plenty of space for four or five large adults to travel in comfort and access to the rear perches is reasonably easy. Boot space is modest, so those who need the extra space will doubtless be drawn to the longer and more practical Defender 110.

Land Rover has also been spotted testing a larger Defender, likely to be badged a 130, with space for seven adults…

The test car also came equipped with the front jump seat, a £815 option. Kids will love it and when not in use it folds down to make a comfortable armrest for the driver and front seat passenger. I would tick that box.

Ensuring that rear visibility is not compromised, the ‘ClearSight’ interior rear-view mirror should be specified, using as it does a camera to show what is behind. Another £525 well spent. 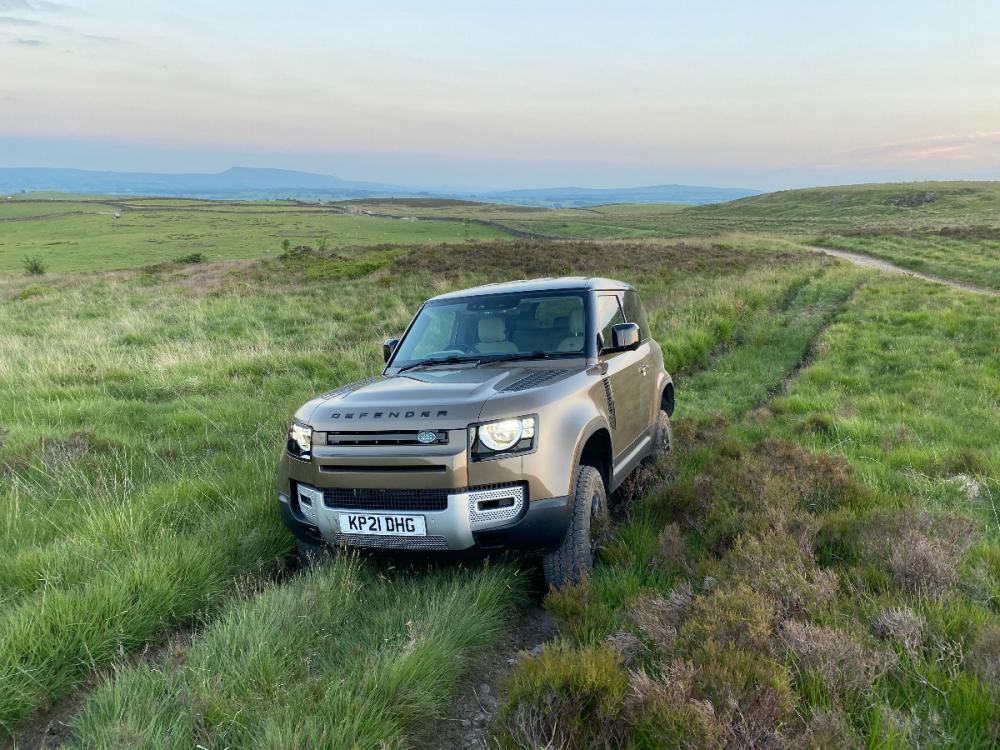 Whilst not exactly a hose out interior, a good rub down with a sponge is appropriate if you’ve got mud everywhere and I did! Wipe clean plastics, rubber floor mats etc…

A Jeep Wrangler is probably the most obvious choice here and from experience it will prove extremely capable too in the rough stuff. However, it is not as refined and comfortable on tarmac. I can see its appeal.

The Toyota Land Cruiser, no longer available in SWB form in the UK, is sturdy enough for the harshest environments and with an excellent reputation for reliability. Not the most exciting 4x4 to drive, but dependability is the watchword.

Mercedes-Benz offers the G-Class, recently in receipt of a much-needed makeover. An awesome off-road vehicle, I am told it is now better behaved on the tarmac. Expensive though…

The new Defender strikes the right note and manages to be bang up to date, yet with a definite nod to what has gone before. Clearly now aiming at an affluent clientele who lead an active life, it looks set to please and is surely now the 4x4 to be seen in.

Immensely capable off road, refined and comfortable on it, the future looks bright for a full order book.

Another test car that will be sadly missed…