Dragging The Snare: All The Men I Never Married By Kim Moore

Kim Moore’s brave and open-hearted new collection does not offer any form of resolution to the significant questions it sets itself, but rather a working through of continuing anxieties and turmoil. Her disparate use of form stresses mending at point of fracture, of bones knitting but leaving surrounding scar tissue. And we should not underestimate her skill at formal representation which is often manifested in broken lines, radical indentation and reinforcement by repetition, as though to circumscribe defiance in a tempered framework, whilst letting insecurity in like a breeze through unglazed windows. A tightrope walk proceeds in this breathtakingly authentic collection: acts of stoical defiance are met with ambivalence of motive; visceral concerns of abuse mitigated by ambiguity of experience. ‘It was complicated’ is the conclusion to poem no.14. (‘I imagine you at home’), and the assertion is delivered with commendable frankness.

Moore’s numbering of poems reads like a liturgy, an inventory of self-contained experiences. And it is worth remembering, in the retrieval of first lines as titles in an ongoing story, that each poem is humbling; an often harrowing, occasionally humorous, always candid picture of a life marked, to some degree, by abuse, casual misogyny and violence. Moore’s address is neither wholesale nor recondite, but it is shared by many, and her poetry gives language to the voiceless by virtue of its abundant sincerity. Tacit acceptance, in destructive relationships, does not abrogate responsibility for abusive behaviour, nor does it amount to complicity: a toeing of the dominant party line is sometimes a safer bet when there is no alternative recourse. Seeing the inconsistency through is the work of Moore’s poetry; institutionalised forms of domination are successfully brought to book at least partly because the poet allows balancing nuances to breathe.

A clever exchange of lines in 8. (‘On a train a man asks me what I’m reading’) enables an interplay between the abstraction of lyrical inner thought, and an outer intrusion of unsolicited male attention. The man’s anticipation of dialogue is one-way, presumed, and the process of unconscious inveigling is resolved as the narrator abandons herself, in the unlikely manner of Larkin’s ‘Dear Warlock-Williams’, to Vers de Société:

‘I smile and say what do you do tell me again and
how many kids do you have remind me again of your wife’.

Both forms of resistance stem from a solitary urge, and both relent on grounds of misplaced social etiquette, if in entirely different contexts. The act of giving in to over-arching male demand is repeated often here and the repetition is as damning of a kind of assumptive misogyny as it remains mostly unacknowledged. Moore’s ingenuity lies in pointing up the contrast between anodyne outward appearance and the reality of male control of social situations. In truth, the act of relenting is not conceived in terms of a shrug; rather is it counter-intuitive and self-effacing. The ad hoc, conspiratorial aggression of a teacher colleague in poem 20. (‘It’s just me and him’) is relentless, idiotic and incredibly destructive; the response she hates herself for - ‘Milk, no sugar, I say with a smile’ - is a convenient way out of awkwardness. If inheritance and the social structure are to blame for burgeoning abuse – the easy insults continue into the classroom in this alarming poem – then ingrained ignorance is an immovable object untroubled by notions of personal responsibility. That the narrator of 32. (‘You lived there for a week’) slams a door in the face of a man in a hotel corridor that may be a lift, in a country that is unnamed, anonymises an incident in order to foreground the generality of abuse, does not diminish her sense of rudeness in the moment. Effecting another form of displacement, she conceals the fear of being stalked behind a mask of unwarranted guilt and tells herself that ‘it was nothing’.

Perpetrated in schools even as recently as the time of Kim Moore’s primary education, the seamless apportioning of girls into categories of subservience is examined in 21. (‘When he tells me I’m not allowed’). Yielding an inference that thematic outliers are instrumental to the collection’s wider purpose, Moore’s fine poem of gendering, rules and recalcitrance is, or was, a losing battle. The sowing of early stereotypes may later be harvested in dynamics of power and subjugation, as the meticulous brutality of the final tercet presages:

‘She bends her cover back so the spine cracks,
balances it on one palm, turns to me and tells me
turn around, at once, face the wall.’

The poet is cognizant of the child’s enforced subjection - her earlier resistance is powerless to understand or countermand a ruthless, culturally-accepted, system of control administered in the ironic form of a woman. Kim Moore brings necessary venom to the table here and throughout her capacious continuum of anxiety. The location of antagonism in the commonplace, in the ‘throwaway’ male line, demands real skill because the problem is systemically embedded, mostly falling beneath the general radar. 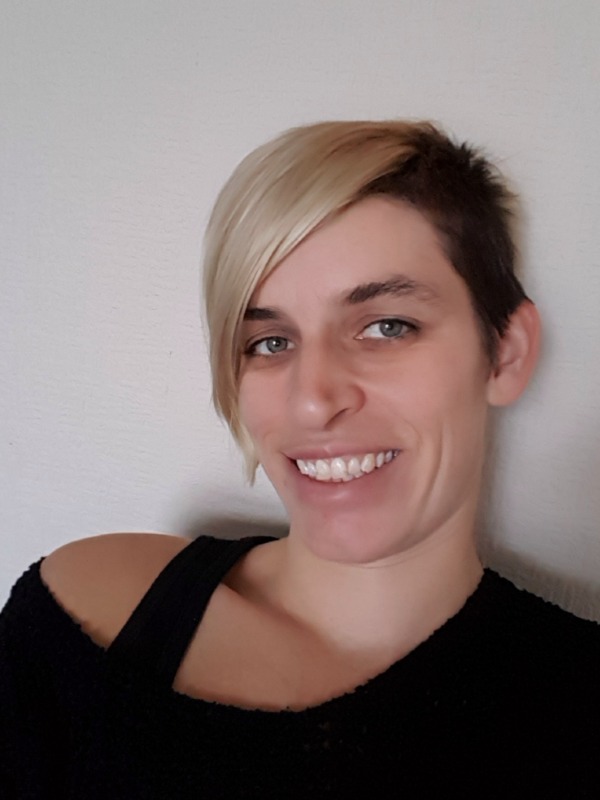 Kim Moore
Which dereliction will patently not be true of these poems, whose inner force lies in a recognition of not always having known, of a sense of continually acquired wisdom. The tentative and beautiful 15. (‘I knew he was dangerous’) retails a knowing abstraction mired in its own innocence, a dangerous yielding to imagined rewards: ‘Oh I knew nothing back then, I thought sex was a promise / that would keep being fulfilled’. The dull ache of Moore’s backward glance is turned into pain by the process of learning, as though the act of striving for permanence was as useless as the pursuit of happiness. Her pain is tortured by remembrance of demeanour and the body’s physical detail; her final lines enshrine as they valedictorise a series of formative experiences:

‘I knew nothing about what is was to be seen, what it means
to change or be changed, to appear, to burst like a star.’

The singular focus of violence is deftly handled. Moore’s capacity to stand back, to concentrate, enables her to excoriate abuse whilst retaining a measured exterior. The brilliant 16. (‘When you rewind what happened’) recalls a relationship marked by an extremity of verbal insults, and bolsters the narrator’s restoration of confidence by reversing the telescope of victimisation, obliging the perpetrator to swallow his own words, which are now recorded for perpetuity in a poem about ‘transformation and violence and loss’. Facing the ghosts of the past, the abuser must encounter an antagonist now entirely removed from emotional and physical reach.

A similar reversal is attempted in the devastatingly effective series of seven sonnets at 31. (‘I’m making this a #NotAllMen free zone’). Here, the bottled spider is the ‘deepfaker’, the man who digitally insinuates images of women into mostly pornographic scenarios. Echoing a recent, well-documented case of deepfakery in the poetry community, Moore’s long study measures the abuse, the mental violence enacted upon the victim, the perpetrator’s ‘harmless’ self-justification, and the refusal of male-dominated organs of the state to act, in rhythmical accretions. The sonnets amount, collectively, to a ballad of gradual exposure, rehearsing the pain of victimhood by degrees, deconstructing the antagonist’s self-delusion in his own words, and pronouncing him guilty where the law will not act:

‘Still, he’s fading like a puff of smoke,
like fog in winter air. Of course it’s fine,
he tells himself, she needs to take a joke.
She’s campaigning to make his crime a crime’.

Authentic to experience, psychologically incisive and viscerally engaged, 31. is relentlessly determined. Shadowing Blake Morrison’s ‘The Ballad of the Yorkshire Ripper’ if only tangentially, Moore achieves a kind of redress, and in so doing, opens her narrative to wider questions of male complicity: ‘You might feel implicated // if you’re a man. I’m casting this in stone. / I’m making this a #NotAllMen free zone’.

These are powerful, persuasive poems, reinforced by repetitions which do not strain narrative progression; rather do they act to declare affiliation, to bolster a sense of identity, to affirm emotional or intellectual independence, even to stave off fear. And if any or all of these are speculative assumptions, the reader may be certain that the repeated cries are declaimed in anger at endemic forms of abuse, often practiced with proprietorial insouciance, like the man who ‘brushes a drop of water’ from the thigh of a teenager on the log flume. (7. ‘Imagine you’re me, you’re fifteen’).

Female as ‘PROPERTY’, as male subject, underpins the vigorous mantra of no. 6 (‘That a man approached you in a nightclub’), whose repeated phrasing shakes our complacency like a drumbeat. Moore’s retelling of an incident where the victim strikes the first blow after being ‘manhandled’ is not compromised by her frankness, though it becomes clear that the triumvirate patriarchy of police, lawyer and abuser’s father thinks otherwise. It need not signify because the mea culpa is owned, as it so often is in Moore’s profoundly suggestive poetics, in the violence of the antagonist’s own words:


Also by Steve Whitaker...
Poem Of The Week: 'The Latest Decalogue' By Arthur Hugh Clough (1819-1861)The Collapse Of Politics: Late Capitalist Fascism - Mikkel Bolt RasmussenPoem Of The Week: 'The Drum' By John Scott Of Amwell (1731-1783)A Dream Of String Vests: Ian Duhig – New And Selected PoemsIf Paradise... Andy Fairweather Low & The Low Riders At Settle
The victim, in one of this collection’s finest, most desperately affecting poems, is displaced suddenly by circumstance, the property of no-one, least of all his own son. No. 44. (‘I saw him fall’) captures the final hours of a man’s demise as though the memory were freeze-framed. Moore recalls the moment he falls over in the street, cradling his bloody head and remaining with him until the end. Describing, in utterly convincing detail, a slow retreat into darkness, the poet’s withering empathy for the dying man is manifested in an act of simple observation, and humanitarian fellow-feeling:

‘and I kept saying please be still, be still,
the ambulance is coming. I held his head
in my hands, I could see the dark shine
of his eye, the swelling of his cheekbone.’

And it is characteristic of Moore’s skill at distilling reticence and self-doubt into her work that she is able to invest a depressing tableau with wider resonance, with irony, and with a tone of harrowingly authentic isolation at whose heart lies a sense of guilt. The lone woman and the dying man are the central figures in a silent vision untroubled by passers-by, who come and go like the disinterested passengers of ‘Adlestrop’. Her ministry, conducted in a state of anxiety, is the embodiment of undiluted empathy.

All the Men I Never Married is a work of immense focus, intelligence and integrity.


All the Men I Never Married is published by Seren