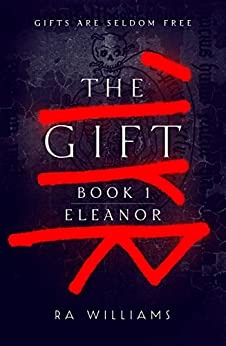 Audacity, authorial panache, and a quasi-forensic diligence, saturate the eldritch, often wondrously grisly pages of R.A. Williams’ first instalment in his The Gift Trilogy. Book 1: Eleanor is a cleverly executed and thoroughly absorbing, if complex, megillah which romps along at a zesty pace despite its narrative having to chart a wildly disparate catena of epochs, events, and ideologies.

To conceive of a story almost deserving the term ‘epic’ is one thing…to artfully weave its multifarious strands together and do so with scintillating aplomb is another. Historical Fantasy as a genre is not for the faint-hearted author!

All too often when diving into a work sitting within this admittedly loose-limbed genre, I have found myself unhappily marooned in the literary equivalent of a cryptic escape room fashioned from materials as incongruent as they are flimsy. I’ve encountered narratives as fractured as they are clumsy, and pitiful world building on a par with the best efforts of a hapless scribe in possession of a woefully febrile imagination, but having absolutely no understanding of the architectonics necessary for effective storytelling.

To conceive of a story almost deserving the term ‘epic’ is one thing…to artfully weave its multifarious strands together and do so with scintillating aplomb is another.
Add to this unpalatable mix unconvincing character rendition, floridly esoteric linguistic eccentricity, and a misjudged reliance upon auxesis, and the genre can spawn works likely to leave all but the most devoted acolyte both bewildered, and occasionally even bored. I’ve even found myself belittling the protagonist’s plight as compared to my sad fate…to endure the book and survive its bizarre quest, without falling into a narcoleptic slumber!

Done well, this odyssey-like genre can offer even the most cynical of readers a deeply rewarding work which draws them into its world with the ineluctable force of a swirling whirlpool. Further, if executed expertly, the genre can offer wonderful works, every bit as educative as they are gripping and satisfyingly exotic.

I gleefully raced through my review copy of Williams’ superb novel and can enthusiastically report that he has entirely restored my faith in a genre that had sadly begun to lose its pull on my own reading tastes.

Where innumerable contemporary authors have drowned in the tumultuous waters of Historical Fantasy, Williams not only remains gloriously buoyant, he seems to thrive amongst its literary eddies, swimming elegantly through his novel’s myriad complexities and myth-soaked depths. He has written an absolute cracker and dextrously laid the foundation for what I am sure will be a hugely popular trilogy.

Our opening scene takes place within the rapidly flooding bowels of the doomed RMS Titanic as the “unsinkable” White Star liner begins her inexorable journey to the bottom of the gelid North Atlantic Ocean. 14thApril 1912…an American steel heiress, Eleanor Annenberg is plucked from certain death by a mysterious figure, but only after she has witnessed a life-defining scene of incomprehensible, supernatural grotesquery.

Dark Fantasy as a genre has many putative founders and is best defined by Brian Stableford who wrote, “it is a sub-genre of fantasy and incorporates elements of horror in fiction with the standard formulae of fantasy form”
A sarcophagus being transported in the Titanic’s cavernous cargo hold has shed its stone lid and given bloodthirsty liberty to something beyond Eleanor’s sixteen-year-old mortal mind. Elle, rescued by RMS Carpathia, becomes obsessed by the need to understand the frenzied butchery she has witnessed, and find her shadowy, mesmeric saviour.

Our plot takes us to the verdant river deltas of the Belgian Congo in 1912, then to the carnage of trench warfare at Cape Helles, Gallipoli in 1915. As the story unfolds in a broadly linear manner, orbiting Elle’s 1939 present, Williams takes us on a colourful odyssey, skilfully incorporating episodes all told in the present tense, but set between 1915 and 1939. We find ourselves off the coast of Honduras in search of Captain Morgan’s lost Spanish gold, Depression blighted Michigan in 1929 and Folkestone, Kent on the eve of world war two.

Elle has gained a PhD in Ethnology and rebelliously established her credentials as a world leading expert in Teutonic Paganism. Coming to the attention of Dr Marcel Mauss, true-life author of The Gift, a groundbreaking essay in L'Année Sociologique, Elle starts to connect her own research with the events she traumatically witnessed deep within the Titanic’s tragically ruptured hull.

What follows is an almost psychedelic interplay of Mayan myth, Germanic folk lore and ancient demonic legend, all held together by Balthasar Toule - the enigmatic Englishman who saved her in 1912. Fate has placed our intrepid heiress at the centre of a supernatural battle between the unimaginably vile, anthropophagus “Cremin” led by their demonic queen, Siobahn and those who seek to defy her.

Mauss’ sociological theory underpins the entire romp. A “Gift” confers a reciprocal bond upon the receiver and some gifts come at an infernal price, so much so as to become a purgatorial curse. Elle tenaciously stitches together multihued fragments drawn from history’s darkest moments to shed light on her own sense of self, and her role in what soon transpires to be a centuries old conflict.

What may sound ludicrous by way of a narrative train becomes disturbingly believable in Williams’ skilled hands. He draws upon Magic Realism, at times echoing the spirit of Gabriel Garcia Marquez’s One Hundred Years of Solitude, if not achieving its intellectual and literary brilliance. It’s perhaps fairer to link Williams’ work with Alejo Carpentier’s The Kingdoms of This world (1949) and turn to works within the Dark Fantasy genre in order to both appreciate and understand his captivatingly innovative book.

Dark Fantasy as a genre has many putative founders and is best defined by Brian Stableford who wrote, “it is a sub-genre of fantasy and incorporates elements of horror in fiction with the standard formulae of fantasy form”. Saturated with deliciously decanted Gothic tropes such as monsters and ghouls, crypts and the mysteries of the occult, this genre has been readily embraced by Williams, but given a magical twist. He’s spliced together the rigours of Historical Fiction with the unfettered otherworldliness of horrific fantasy!

Whilst Williams delivers his often cringingly barbaric fare with gore-soaked elan, he does occasionally allow his energetic pen to run into the rapids of grandiloquence, narrowly avoiding conspicuously sesquipedalian excess
The novel’s dramatic depth comes from one more ace up Williams’ literary sleeve. Within the Historical Fiction genre sits the Secret History sub-genre, epitomised by Lord Dunsany’s The Charcoal Woman’s Shadow. Echoing Dunsany, he explores the notion of the supernatural being hidden from mortal sight beneath an artificed canopy of the quotidian and occluded by our normative, innocent understandings.

Special mention must be given to Williams’ often exquisite prose. In addition to creating a cornucopia of vividly realised characters populating his colourful tale, Williams has achieved what any successful author of historical fiction must. He has done his homework, learned the recondite lexicon of the epochs he visits, and used his evident hours in research libraries to enliven his pen, not blunt it with extraneous detail.

When describing nautical scenes, his descriptive prose is nothing short of mesmerising. When addressing the alarums and excursions of the Great War and its horrors, his period knowledge is breathtaking in terms of both scope and scholastic accuracy. Tempted as I am to quote him ad nauseam, a flavour of his knowing prose is helpful:

“Having now lived on Adel for three days, Elle had got to know the crew, their seamanship meticulous yet at ease. Hoisting courses on tackles, the crew drove the courses through blocks on the jackyard, heads coming to attention as Adel’s power winches pulled the jackyard taut. Effortlessly, the sail came to the yard. Secured to the catheads, the forecourse canted, and the foresail fluffed as an abrupt gust filled them out, scudding the schooner along at an impressive seventeen knots.”

Whilst Williams delivers his often cringingly barbaric fare with gore-soaked elan, he does occasionally allow his energetic pen to run into the rapids of grandiloquence, narrowly avoiding conspicuously sesquipedalian excess. In the round, these minor stylistic errors are never truly deleterious and can be easily forgiven by dint of the novel’s mostly sublime use of both tone and the full panoply of literary devices available to an obviously gifted writer.

That said, Williams should never pen a sex scene. Thankfully brief, the one episode he does attempt to convey feels like an editorial oversight to my mind: “Balthasar, she whispered, lost in the whirligig of his seizing muscle exploring her, his movement raw, yet strangely regal, the sensations reverberating in her arms. Her body a knot of convulsions.”

So, a meticulously researched, dazzlingly erudite fusion of genres delivered with technical finesse and liberally laced with genuinely shocking horror, this one is a pirate’s treasure chest stuffed to the brim with thrills, intrigue, and gruesome gothic gore. Needless to say, I am eagerly anticipating Book 2 in the trilogy, with the nervous caveat that Williams sticks to darkly nefarious doings in the dark, rather than encounters of an altogether more romantic hue!

The Gift: Book 1, Eleanor is published by Whitefox
Also by Paul Spalding-Mulcock...
A Sower In The Desert: Smoke By Ivan Turgenev (1818-1883)“Love Is The Magician That Pulls Man Out Of His Own Hat”: A Marvellous Light By Freya MarskeLittle Liar Boy - A Hall Of Mirrors StoryThe Devil's In The Detail: Johannes Cabal The Necromancer by Jonathan L. HowardAn Audience With The Devil - A Hall Of Mirrors Story