Hamilton Booed As A Controversial Penalty Robs Vettel Of Victory 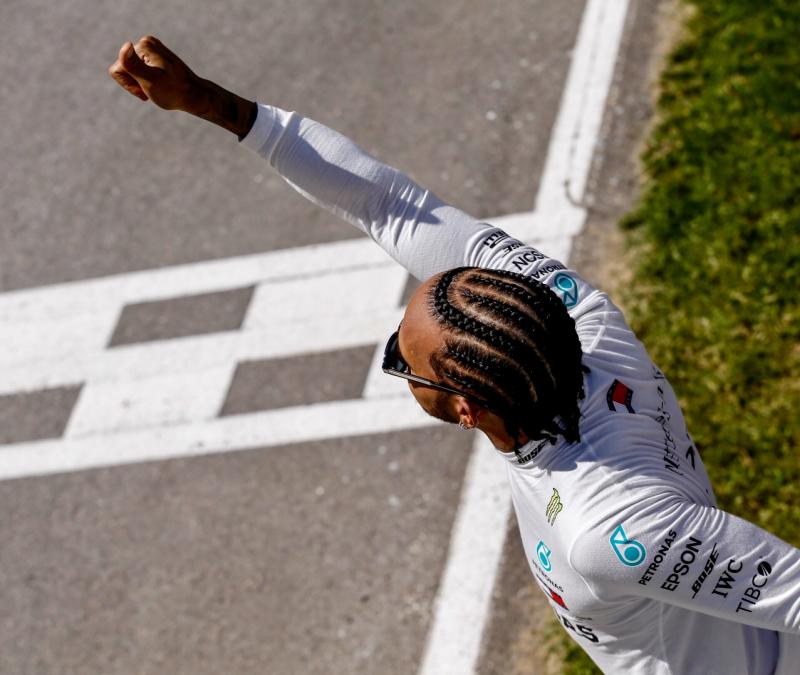 Hamilton received the victory spoils, but also boos from the capacity crowd in Montreal
Less than two weeks after we saw the chequered flag fly in Monaco the Formula 1 circus reconvened almost four thousand miles across the Atlantic at the Circuit Gilles Villeneuve, on an island in the St Lawrence seaway just outside downtown Montreal, and in highly controversial circumstances it was Mercedes’ Lewis Hamilton who emerged victorious from this year’s Canadian Grand Prix amidst a cacophony of boos from the capacity crowd.

In Friday’s opening practice session Hamilton and Valtteri Bottas had easily topped the timesheets, reflecting the team’s domination of the season to date, but come second practice Ferrari’s Charles Leclerc and Sebastian Vettel fought back by setting the fastest times, ahead of Bottas and McLaren’s Carlos Sainz. Hamilton was only sixth quickest, but lost control of his car at the chicane at Turns 8 and 9, hitting the concrete wall on the outside of the track. Although the championship leader managed to limp back to the pits he was unable to take any further part in the session. 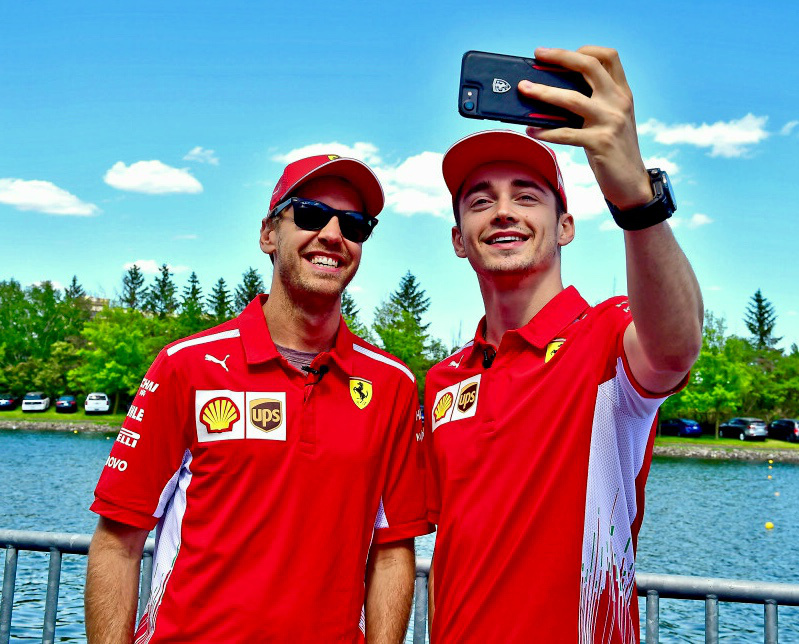 The Ferrari “selfie” boys, Vettel and Leclerc, smiling before controversy was to engulf the race
In Saturday’s final practice period it was a case of two by two by two at the front of the field as Vettel’s and Leclerc’s Ferraris headed the Mercs of Hamilton and Bottas and the Red Bulls of Max Verstappen and Pierre Gasly.

The qualifying hour began at two pm local time and, as the nature of the grid for the following day’s race was gradually decided, there was a shock exit for Verstappen part way through after being caught out by a big off at the Wall of Champions for Haas’ Kevin Magnussen. Somewhat embarrassingly the pair of Racing Point cars, driven by Sergio Perez and Lance Stroll, had both been knocked out during the first part of qualifying for their home Grand Prix.

Come the battle for the top ten starting slots, Vettel put in a superb last effort to pip close rival Hamilton and claim his first pole position of the year, commenting “I’m just delighted as the last few weeks have been difficult for us”. His young team-mate Leclerc was third fastest, with Renault’s Daniel Ricciardo claiming an excellent fourth place. Bottas was noticeably less impressive though, spinning his Mercedes at the start of his first fast lap and then only setting the sixth quickest time after a poor second effort. 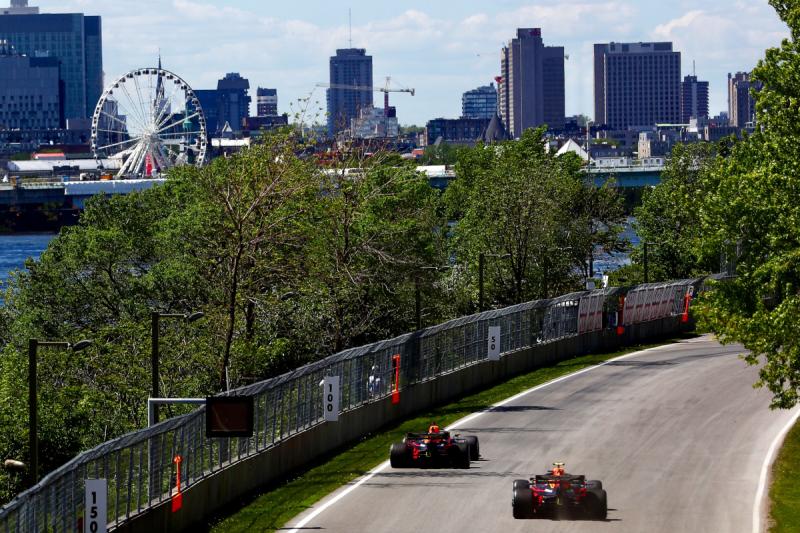 The two Red Bulls blast around the Circuit Gilles Villeneuve across from downtown Montreal
As I know from personal experience, Montreal is a cold place from autumn to spring, but race day in June was wonderfully hot and sunny for the massed crowds basking in the sun as the start approached.

When the red lights went out polesitter Vettel held the early advantage ahead of Hamilton, Leclerc and Ricciardo and the leading trio soon started to stretch their legs. Sadly for young British driver Lando Norris his race was to end prematurely on just lap nine with a major failure of his right rear suspension after suspected overheating brakes. 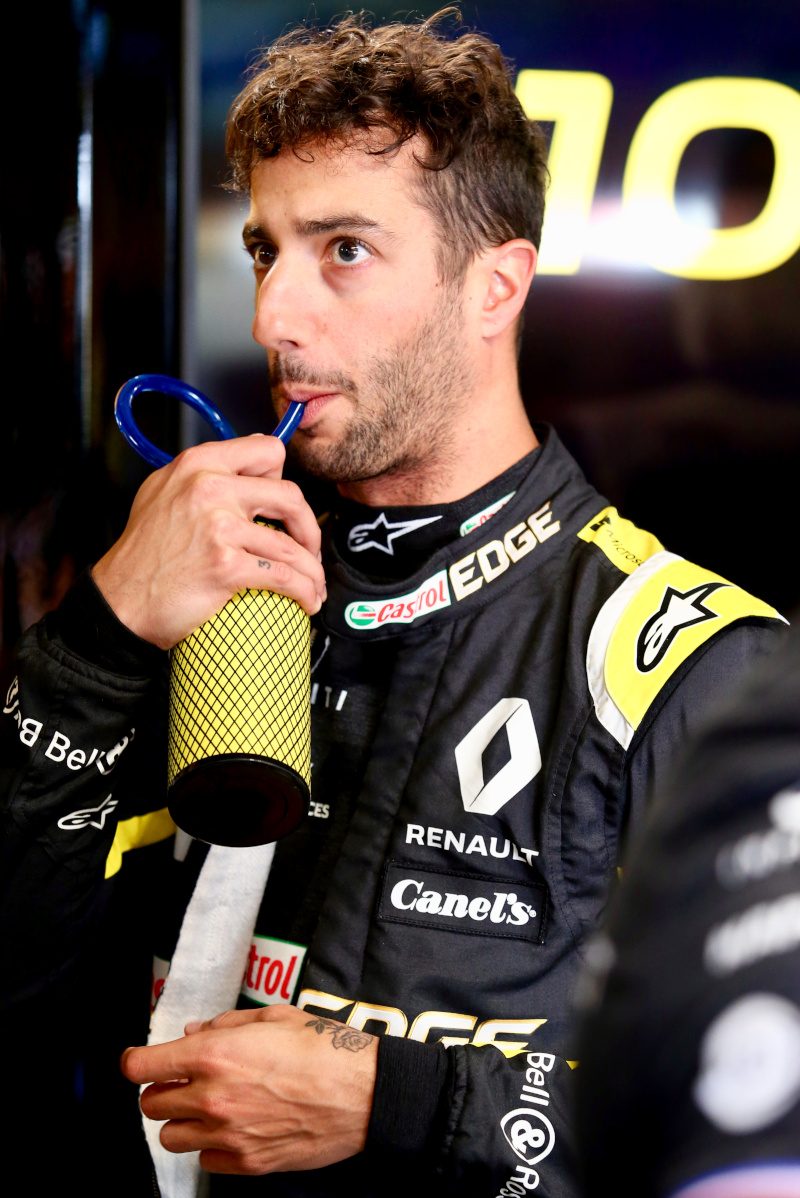 Renault’s highly likeable Daniel Ricciardo qualified an impressive fourth before finishing sixth
By the 25th tour Vettel, Hamilton and Leclerc were 17 seconds clear of fourth placed Bottas and one lap later the leading Vettel stopped to switch from medium specification tyres to hard ones, with Hamilton then doing likewise. This left Leclerc out front as Ferrari opted to delay his pit stop until lap 33.

Soon it became clear that the fight for victory was going to be between Vettel, who was back in the lead again after Leclerc’s stop, and Hamilton, who was chasing him hard. A great battle ensued between the two drivers who have won nine world championships between them.

On lap 48 Vettel had a brief off and as he fought to control his Ferrari and rejoined the circuit at the exit of Turn 4 Hamilton was in very close attendance. The German retained the lead though, with Hamilton complaining about his driving over the radio.

The incident seemed to have passed until nine tours later when the stewards announced that Vettel would receive a five second penalty for a dangerous reentry, a decision which most experienced observers of Formula 1 and the crowd found totally unacceptable. Vettel explained “I saw him (Hamilton), but I had nowhere to go”, whilst Hamilton was told to simply follow his rival home as that would give him the win. 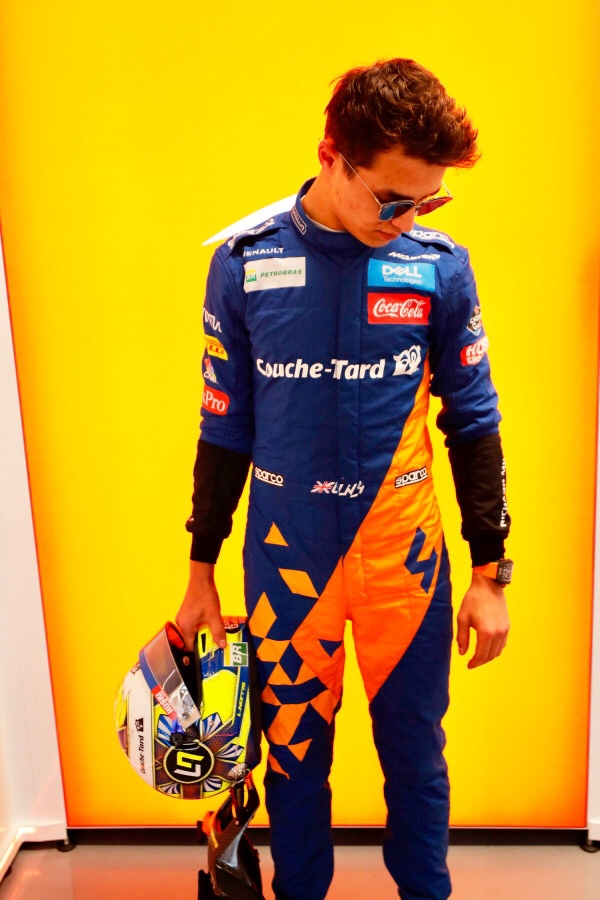 McLaren’s young British driver Lando Norris faced an early retirement on lap 9 of 70
Vettel held off Hamilton to the chequered flag, but his penalty dropped him to second place, with his team-mate Leclerc occupying the final step on the podium. The crowd made it abundantly clear that they disapproved, booing Hamilton and cheering Vettel. High drama indeed, shown live around the world on television to tens of millions of viewers. Hamilton deserved some of the boos as he had helped to instigate the stewards’ investigation with his complaints, but the stewards themselves deserved most of the wrath of the fans and the Ferrari team. At least it all added extra spice to a Grand Prix which had had its moments, but wasn’t a classic.

For the record, despite all the furore about the Vettel penalty, Bottas, Verstappen and Ricciardo completed the top six finishers, with the Mercedes driver claiming the extra point for the fastest race lap.

The arguments about the Vettel penalty raged on in the F1 paddock into the Canadian night, but the sport never stands still for long and soon everyone was packing up and heading east back across the Atlantic to the Circuit Paul Ricard for the French Grand Prix, where we will see whether anyone can break the Mercedes stranglehold on this season and the five preceding ones.


Also by Graham Read...
Flawless Russell Makes It Two Wins In A RowSainz To Ferrari, Ricciardo To Mclaren And Vettel’s FutureVettel To Leave Ferrari At Season EndRussell Holds Off Leclerc To Reign In Spain﻿Albon On Top After An Epic Battle With Leclerc
2019 Formula 1 Canadian Grand Prix