Yorkshire is a vast county of unrivalled beauty in its landscape. Woven into the exquisite tapestry of this are numerous ruins, follies and curious geological deposits each with its own story to tell. Sometimes true, often legendary, these tales enrich the experience of our encounters as we discover them, adding to the magic of a wonderfully rewarding walk. Here is an idea for an outing once we are able again to freely explore the countryside!

Close to the settlement of Sutton-in-Craven on the northern flanks of Keighley Moor sit two follies known collectively as the Salt & Pepper Pots, due, one assumes, to their architectural resemblance to these culinary accoutrements. Lund’s Tower (GR SD 993 431) and the neighbouring Wainman’s Pinnacle (SD 986 429) sit atop a steep ridge called Earl Crag within walking distance of both Cowling and Sutton-in-Craven and offering extensive views to the north. 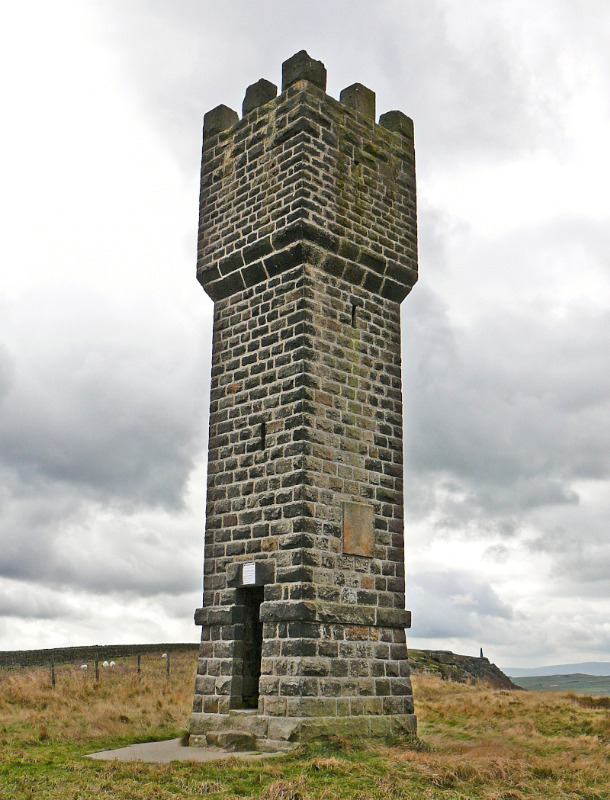 Lund’s Tower
Lund’s Tower was commissioned to be built in 1887 by a wealthy industrialist, James Lund, who had bought and reconstructed Malsis Hall across the valley in Cross Hills circa 1860. The former manor house still stands; it became a school in 1920, closing its doors in 2014 due to inadequate student numbers, despite the lure of a 9-hole golf course and a rifle range on the school grounds. It has since become a care centre providing rehabilitation support for people suffering from trauma.

Lund’s Tower has several alternative names, causing some debate over the reason for its construction. Early records name the tower Ethel Tower – suggesting it was built to commemorate the 21st birthday of Lund’s daughter, however this milestone was not reached by Ethel until 1896.

It’s other name, Jubilee Tower, suggests it was built to commemorate the Jubilee of Queen Victoria. The tower first appeared on the 2nd Edition Ordnance Survey map, created from surveys compiled in 1892, therefore it is assumed the Jubilee refers to Queen Victoria’s Golden Jubilee of 1887.

Both landmarks are Grade II Listed Buildings on the National Heritage List for England, and the Historic England website describes Lund’s Tower as “A small square tower with plinth and corbelled battlements. A plaque is now illegible. Stone spiral stair inside”. The thirty-nine steps lead to a viewing platform for far-reaching vistas to the horizon.


Also by Caroline Spalding...
Review: The Sheltering Sky By Paul BowlesThe Singing Ringing TreeHeritage Walks: Pots & Pans Stone, Uppermill, Saddleworth MoorTwelve Apostles - Burley Moor (Ilkley)Store Cupboard Delights
Wainman’s Pinnacle, a mile away, is an older construction, built by the Wainman family who resided at Carr Head Hall. Why and when the pinnacle was constructed has long been debated; however Cowling’s Local History Group, the Moonrakers, obtained written evidence to confirm the date of construction to 1830. The pinnacle was rebuilt later in the 19th century after damage from lightening, its construction date recorded as 1898 by Historic England.

Reasons for its original construction include as a memorial to the Napoleonic Wars, particularly the battle of Waterloo 1815. Other rather more superstitious theories include one that Mrs Wainman had it built above a spot where she had buried a charm to rid the family of ghosts from Carr Head.

Whether you’re a hardy hiker or a casual stroller; these curious monuments are well placed to be enjoyed as part of a walk – the OS Explorer Map OL21 details all your route options.

Facts were drawn from, and further information can be found at: