‘Hiding Away From The World Never Works, Because You Still Have To Meet Yourself In The Mirror Every Morning': the Seven Sisters By Lucinda Riley 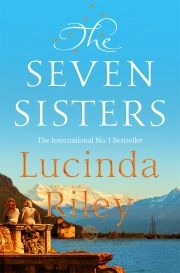 There are only a limited number of musical notes, yet after all these centuries, composers can still create new music – a different arrangement of notes on the stave. Surely, the time must come when every permutation has been tried and there can be no more new music?

Even more amazing, there are only twenty-six letters in the alphabet and yet, how many books are there on the shelves, all with different arrangements of those letters – the mind boggles!

But I digress. I am also intrigued about the inspiration of writers. Where do they get their ideas? From people they’ve met, incidents they’ve witnessed, moments in life suspended in time, from paintings and photographs, the list is endless. And so, we come to The Seven Sisters, inspired loosely by the constellation and mythology of the 7 Pleiades which sit next to Orion’s belt in our night skies. Each one of the mythological sisters was, according to their legends, a unique and strong female. Each of them had their own strengths and weaknesses. Just as we all do. They have been the subject of myths and legends in almost every culture on the planet. I did not realise (for good or ill) when I started reading it that this was the first of a series: each sister has her own book and the end of this one ties the reader into the next.

Six adopted daughters have never questioned their heritage until the death of their father, a multi-billionaire who has provided them with every luxury and allowed them, as adults, to stretch their wings in whichever direction they chose, from London, to the Highlands of Scotland, America, the high seas and beyond. Only Maia, the eldest, stayed at home in Atlantis, her father’s private island on the shores of Lake Geneva. Gifted in languages, this beautiful woman has been able to work from home, translating books and manuscripts. Something of a solitary figure, however, she has a secret from the time she spent at university at the Sorbonne, but during the course of the novel, she learns to face up to her past.

When Pa dies, the girls realise they know nothing about the business which kept him away from home for long periods; they don’t know any of his friends or his relatives but they discover he has exerted the same control in death as in life, apparently for their benefit. By the time they are informed of his passing, he has already been buried at sea and his solicitor has full instructions as to what else must be done. Pa Salt left each girl a letter and the co-ordinates of their place of birth, should they wish to discover their origins.


Lucinda Riley
The novel then follows Maia who decides to go to Rio de Janeiro, where it turns out, she was born. More than any of the others, she wants to know her background and understands why her father pushed her to adopt Portuguese as one of her many tongues. She meets Floriano, historian and writer, whose books she has translated and with whom she has previously only communicated via email. Together, they follow the clues which reveal Maia’s past.

She discovers a once beautiful house, now in disrepair, and a frail old woman living there with her elderly maid. More importantly, there is a portrait on the wall which bears a striking resemblance to Maia herself. Reading letters given to her secretly by the maid, Maia takes the reader back in time as she discovers the life and loves of her great grandmother, Izabela Bonifacio or Bel as she was known. Briefly escaping restrictive society life in Rio and postponing the inevitable arranged marriage to the good and kind Gustavo who ignites no passion in her, the eighteen year old Bel takes a tour of Europe to broaden her mind. She discovers the delights of Paris and, in particular, the avant garde, riotously colourful society of Montparnasse. She escapes her chaperone and explores the vibrant café culture where she inhales the ‘rich aromas of tobacco, coffee and alcohol’, listens to Ravel play Bolero, watches Jean Cocteau as he is feted by admirers and peers over the shoulder of James Joyce as he pours over his manuscript of Finnegan’s Wake. In short, she comes alive as she indulges in a ‘feast for the creative senses’, and her passions are aroused.

Threaded into this narrative is the story of the French sculptor Paul Landowski and the Brazilian engineer Heitor da Silva Costa as they work on the magnificent statue, Christ the Redeemer, which towers over Rio. Through their work, we learn that the ‘artist speaks through his craft and must have known suffering to achieve greatness’. Some characters in the book are drawn straight from the pages of history, but the stories in and around their lives are pure fiction.Not, it has to be said, the Wall Street Crash, which had a devastating impact on so many people, including characters in this novel.

Reading is one way to travel, and in these pages, you can feel the tropical heat of Brazil, taste the faint smell of the sea, and enjoy the beauty and romance of Paris with its narrow lanes, elegant cafes and chic style.


Also by Artis-Ann ...
Review: Her Last Promise By Kathryn Hughes‘So Many Dead In The Ashes’ : Dust Off The Bones by Paul HowarthMelody Of Peace: The Electric By Tim MurgatroydHe Knows I Know He Knows: Cradle Song By Robert EdricThe Best And The Absolute Worst: The Dressmaker’s Secret By Lorna Cook
In the author’s note, Riley directs the reader to her website for more background information about the mythology behind this novel; it certainly proved interesting reading but also revealed that Riley sadly lost her four-year battle with cancer in June 2021, aged just 55. The eighth and final book in the series, for which she had already made extensive notes, will be written by her son, with whom she has previously collaborated, and is due for publication in 2023.


The Seven Sisters is published by Pan Books