I'm A Nonentity - Get Me Out Of Here!

With the departure from Downing Street of the Prime Minister’s chief adviser, Dominic Cummings, it has been reported that the PM is searching for “a new team to run the government”. Might I suggest Keir Starmer and the Labour Party? Or, failing that, Big Sam Allardyce is always available. He can usually save a team from relegation. The previous Head Coach – Cummings – had most definitely lost the dressing room, with a falling out between his star striker (Lee Cain) and the new defender (Allegra Stratton), who had been brought in over his head by the Director of Football (Boris Johnson). Think John Terry and Wayne Bridge. All we’re missing now is a statement from the club thanking Cummings for his efforts but insisting that they were left with no choice after a series of disappointing results.

Cummings was last seen exiting No. 10 carrying a cardboard box that appeared to be on the verge of a failure of structural integrity. Admittedly, Cummings never had much integrity in the first place. Still, were it not for his fingers holding it together, it looked like the bottom would fall out and the entire structure collapse, with government insider information cascading out. I’m sure there’s a metaphor for the government in there somewhere, but I may need a special adviser to help me find it.

Having been voted out of one reality TV house, it must surely be a coincidence that Cummings has left just in time for the start of the new series of I’m A Celebrity – Get Me Out Of Here! Then again, it is being held in a castle this time and Dom does have a fondness for visiting castles during lockdown.

Dan Wootton of The Sun was incensed by Cummings’ departure from the Downing Street team. “How sad that there’s not a place for a genuinely revolutionary outsider like Dominic Cummings in government,” he tweeted. “The liberal media and the establishment got him in the end.” Sorry, what? A “revolutionary outsider”? The “establishment got him”? He went to private school and Oxford. He’s married to the commissioning editor of the Spectator. His father-in-law is a baronet who owns a castle. His uncle was a Lord Justice. He’s been working on-and-off for the Conservative Party for nearly twenty years. He’s not exactly Che Guevara.

At least the transition of power is proceeding smoothly. That is, the transition of power from Cummings to Carrie Symonds. The Americans could learn a thing or two from us! Self-styled “superforecaster” Cummings had intimated earlier in the year that he hoped to be “largely redundant” by the end of the year, so he wasn’t far wrong with that prediction: he’s wholly redundant instead.

I wonder whether, for Cummings, it truly will be the case that leave means leave. Will there be a transition period where No. 10 tries to negotiate a deal? It seems there is a worry within Downing Street at the consequences of No Deal with Cummings, with a No 10 official saying, “I’m told there is a blog coming.” Ooooh! A blog! See, that’s what you get from revolutionary outsiders! Some rambling, semi-literate verbiage. “It’s really the last days of Rome in here,” the official continued. Hmm, good sense of perspective there. I’m pretty sure the Vandals started off outside the walls? 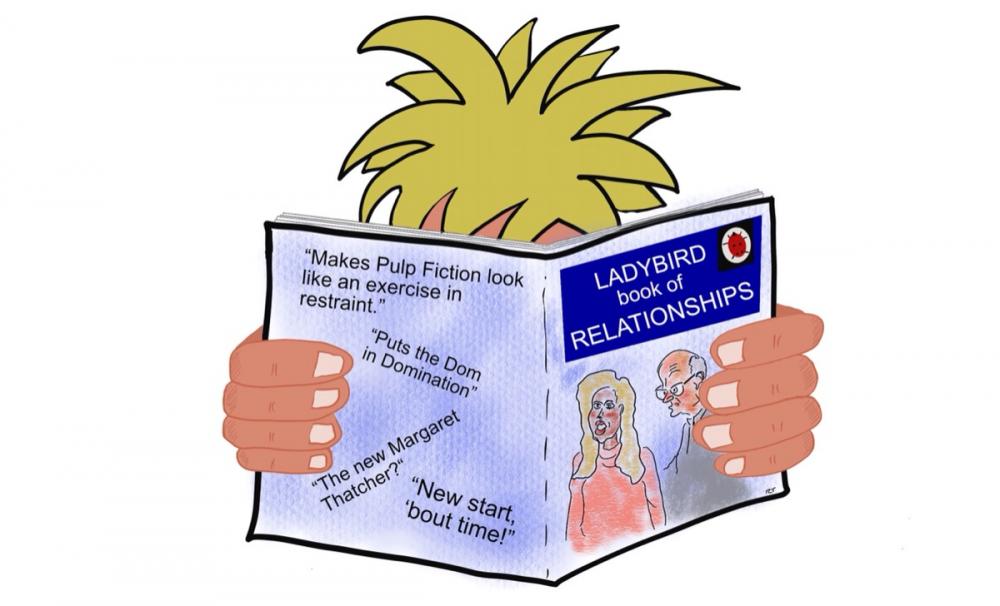 In one of the more bizarre quotes surrounding the story, the Sunday Times reported that one of Boris Johnson’s colleagues had said: “Dom’s favourite gesture at the moment, in conversations is to pull the pin from an imaginary hand grenade and then throw the grenade over his shoulder as he leaves the room. Everyone is braced.” Braced? What for? The explosion of laughter once he’s left?

The BBC also reported: “The prime minister reportedly said that relations remain good but that relationships can break up, at which point you no longer live together.” It looks like he’s been reading the Ladybird Guide to Relationships again. If you skip a few pages, Boris, you might find out where children come from.


Also by Roger Winterbottom...
Will Johnson The Pleasure Bot Have a Premature Relaxation?Operation Close Stable DoorThe Lockdown ThreequelReview: Troubled Blood By Robert GalbraithSo Long, And Thanks For All The Fish
In more positive news, there has been a major breakthrough in the development of a vaccine for Covid-19. The Guardian reported that the NHS would aim to vaccinate up to five thousand people a day, which would mean that we should all be immune by about 2057. The vaccine will, however, require specialist refrigeration equipment for transportation and storage, but don’t worry about that – Boris Johnson knows all the ins and outs of fridges.

There are many people who distrust vaccines and who make their feelings known on social media. I saw one post that said, “You can stick the vaccine up your arse!” To be honest, that sounds like a good plan for those who don’t like needles.

The head of the vaccine task force, Kate Bingham, is eminently well-qualified for the job: she’s married to a Tory MP and went to school with Boris Johnson’s sister, which seems to be about all you need on a CV nowadays to get a government job or contract. You certainly don’t need any sort of competitive process or interview. Rather than using existing civil servants, Bingham awarded £670,000 for public relations work to a firm linked to Dominic Cummings’ father-in-law. If you think there’s anything dodgy about that, you can always complain to the anti-corruption champion, John Penrose. He’s also a Tory MP who went to school with Johnson. Oh, and his wife is Dido Harding, who was placed in charge of test and trace without a competitive process or interview or, indeed, any relevant qualifications. Rather than drawing on existing public health expertise, Harding naturally brought in a team to work for her that consisted of people she knew from her days working in telecoms and retail. It’s a bit like Sam Allardyce always bringing Sammy Lee with him. At least they could always get a result on a wet Wednesday night in Stoke.

But with the ongoing problems surrounding test and trace, even the Conservatives are suggesting Harding is moved on, with Sir Bernard Jenkin saying there was a “vacuum of leadership” and that Harding should take a “well-earned rest”. The Government’s usual method of moving someone on and keeping them quiet is by providing them with a new identity and a new job somewhere where they won’t be seen or heard from again – the House of Lords. I like to think of it as their witless protection programme. I wonder what deal Cummings will be offered not to throw any hand grenades. Lord of Barnard Castle perhaps?