Part theatre, part film, imagine if’s My Old Man will have its world premiere at Prime Studios, Leeds on Saturday 13 and Sunday 14 November, before embarking on a UK tour to theatres and community venues. 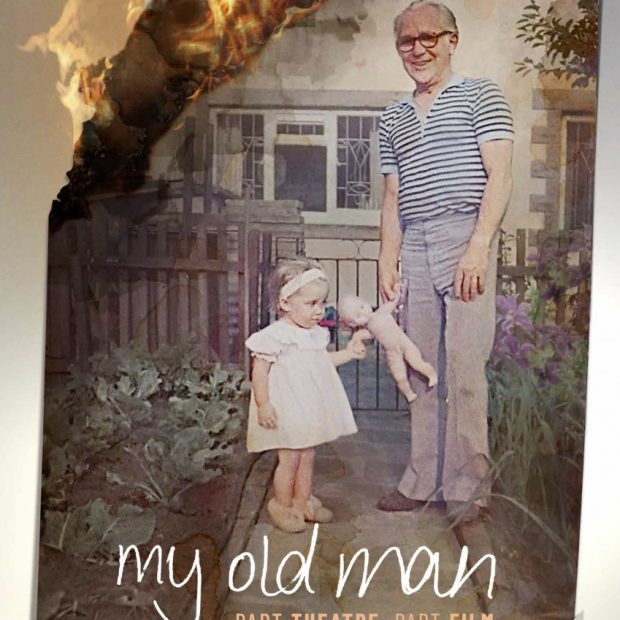 The production will preview at Polish Klub, Bury, before it premieres at Prime Studios. Following this, My Old Man will tour to York Theatre Royal, York; Touchstones, Rochdale; The Bridge House, London; Kala Sangam, Bradford; The Abbeydale Picture House, Sheffield; and The Constitutional, Farsley.

A follow-up to imagine if’s 2019 stage show Jadek, My Old Man is the story of old, blind, Polish soldier Michał and his Yorkshire-born granddaughter Tasha.

Joining them is Lorraine Bruce (White Gold, The Syndicate) as Cathy, Liam Fox (Emmerdale) as Steve, William Fox (Peterloo) as Mark, Aaron Cobham (The Spanish Princess) as Alex, Amanda Gordon (The Resistible Rise of Arturo Ui at Chichester Festival Theatre and Duchess Theatre) as Gillian, and Anthony Taylor (Doctor Who) as Edward.

Liam Fox, who plays Steve in My Old Man, and is best-known for his role as Dan Spencer in Emmerdale said:
“From playing such a loveable character in Emmerdale, it’s actually quite a nice challenge to play a character who is completely at odds with that. My character Steve is a right piece of work - but you’ll have to see the show to see what I mean.

"The story of My Old Man is so apt for what we’ve been experiencing over the last couple of years - with the rising hate crimes, Brexit and Trump and the mistrust which people have towards each other. But it’s also about how most people are good people - but we can just be swayed by events or what we see on the news.

"I think it’s really important that My Old Man brings the story of a normal working-class family, who have Polish heritage, and who are dealing with the fall-out from events over the past few years to stage and screen - and I hope it makes people think.”

Lorraine Bruce, who plays Cathy, said:
“During lockdown I volunteered with Age U.K. and got to meet lots of elders. Their warmth, their indomitable spirit and stoic optimism blew me away.

"Chesca has written a lovely story that shows the vulnerability and strength of a wonderful gentleman. My Old Man reminds me how strong we are and how much we all benefit when we come together and care for each other as a community.”

My Old Man sees Tasha move out of her and Michał’s family home - and Michał’s whole world changes. The school dinner lady becomes his favourite person, a new neighbour moves onto the street – and he faces his biggest battle yet.

Tasha faces battles of her own too: after the publication of her first children’s book, she finds herself moving in a different world, exploring her own class identity and new family dynamics.

A moving and heartfelt production, My Old Man is a reflection of contemporary Britain, touching on identity, intergenerational relationships and post-traumatic stress disorder.

As with Jadek, Polish identity is a key theme of My Old Man.

Chesca Cholewa, who wrote Jadek and has written My Old Man, said:
“I’m thirty and I’ve never in my life seen a Polish person on stage or TV, who is not an immigrant, cleaner or drug dealer. These are dangerously bad stereotypes. Poles are the largest group of foreign nationals, and Polish is England’s second language, but you wouldn’t know that from our theatre programming. There is scant representation of Poles in mainstream British entertainment. In My Old Man, we are rebalancing that, bringing to stage and screen fully rounded Polish characters, who struggle with their own traumas and position in contemporary Britain.”

My Old Man sees imagine if join forces with Lithuanian writer and director Milda Baginskaitė, who is directing the production. A rising star in film, Milda’s has previously been selected as a director for Screen Yorkshire’s development programme Flex.

Milda’s previous credits have included experimental dance short film The World is Ours For The Taking (funded and supported by New Creatives North, BBC Arts and Arts Council England). Milda’s BFI-funded short film True Colours – which she directed in collaboration with writer Sumran Hanif – is currently on the festival circuit.

With each of their productions, imagine if not only do extensive research with the people the play is focused on, but work directly with them to ensure their experiences and stories are represented truthfully and authentically.

As the character of Michał is blind, imagine if are touring My Old Man in collaboration with Deafblind UK, who will be providing audio description for the show to ensure it is accessible to blind and visually impaired audiences.

For more information on imagine if please visit
www.imagineiftheatre.co.uk