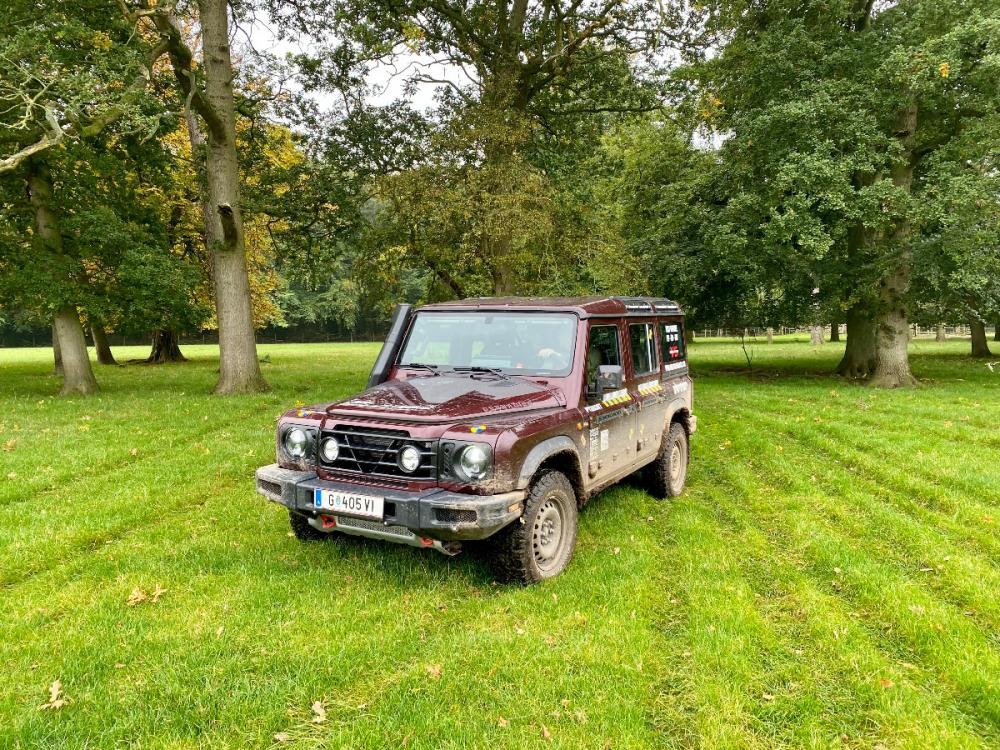 One of the advantages of being very wealthy is that it allows you to make your dreams come true. For Sir Jim Radcliffe, the British billionaire chemical engineer and industrialist, this has allowed him to turn his idea for an all-new off-road vehicle into reality.

His Ineos group is readying the new Grenadier and ahead of the launch date of mid-2022, the company has been touring the UK showcasing the vehicle to the media and brand partners.

I was invited to meet the team and experience the vehicle first-hand in the lovely setting of Duncombe Park near Helmsley, an opportunity too good to miss as it is not every day a new car company is born.

The question that needed to be asked is whether the Grenadier is a serious offering, as when the first pictures emerged it was hard not to think that this was nothing more than a shameless copy of the old Land Rover Defender. 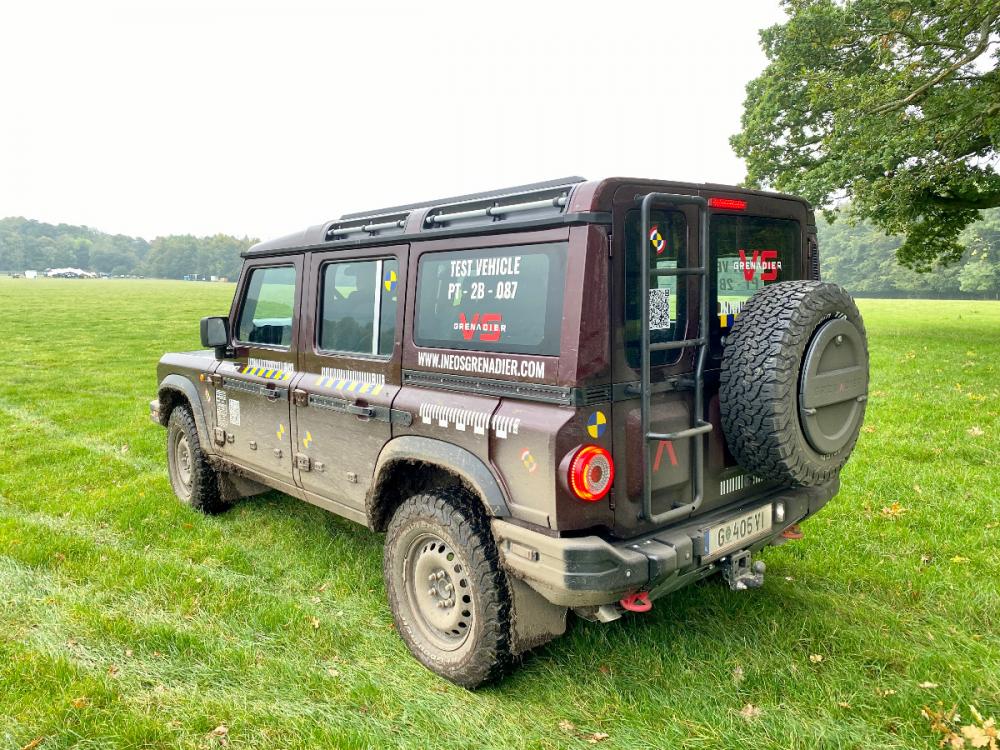 In the flash, there are definite similarities, the silhouette looking oh so familiar. A deliberate ploy to appeal to old Defender fans, now somewhat disgruntled by the new Land Rover moving unashamedly upmarket. Perhaps, but the simple shape does have certain advantages. From behind the wheel, all corners of the 4x4 are easily visible, making it easy to place on the road and of course off it.

You will also observe the utility rails, intended for the easy attachment of equipment. Roof rails are a standard fit too, whilst the large five-piece bumpers offer practical advantages like the easy fitting of a winch. The also make an ideal perch for an impromptu picnic.

Steel wheels signal that this is a vehicle intended to work for its living and I was pleased to see BF Goodrich tyres fitted, probably the best all-terrain rubber in the business. 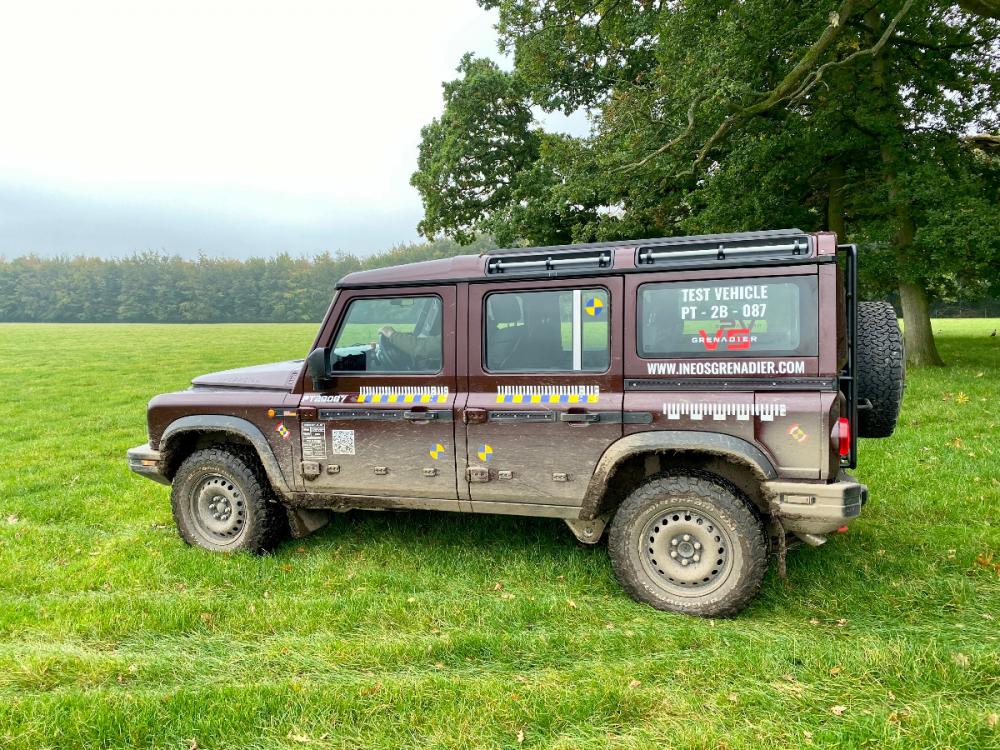 The passenger doors feel substantial, whilst to the rear twin doors are fitted. To the left, the smaller door opens first, ideal if you just want to quickly throw something in. Also, very useful if parked in a confined space.

Looking underneath, plenty of underbody protection is fitted, which should keep key components from being damaged.

The interior is a simple one but being a pre-production model, I was not permitted to prod and poke as much as I would have liked. Comfortable Recaro seats are undoubtedly a highlight, and the wipeable fabrics are easy to clean.

Switchgear is designed to be operated with gloves on, so chunky is the order of the day. Overhead, a control panel contains a mass of switches, some of which can be adapted as required for say winch operation or the like. Without my reading glasses, it was hard to identify them. 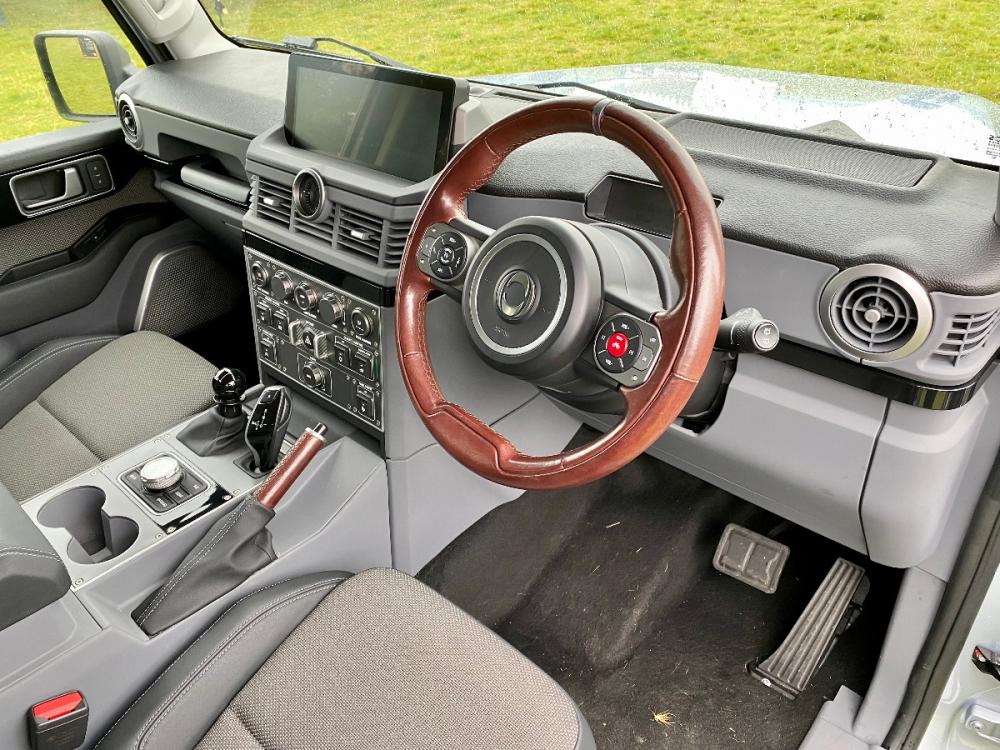 In front of the driver, sits a bank of warning lights, the main instrument panel being centrally mounted. Glancing amidships to read the speedometer may take a little getting used to.

In what is intended to be quite an analogue interior, the BMW gear selector does look a tad out of place, but from experience it does work well.

You may have guessed by now that power comes from BMW sourced engines, both 3.0-litres in capacity, straight-six, either petrol or diesel. They have been chosen for their linear and smooth power delivery. They are powerful and in diesel form especially, frugal too.

A smooth eight-speed ZF gearbox comes as standard as of course does permanent all-wheel drive. And as the Grenadier is intended to be peerless off-road, there is of course a low-range box and three locking differentials for when the going gets really tough.

Sadly, I wasn’t permitted to get behind the wheel myself, instead I had to content myself with a 30-minute passenger ride through some of Duncombe Park’s acres of woodlands. 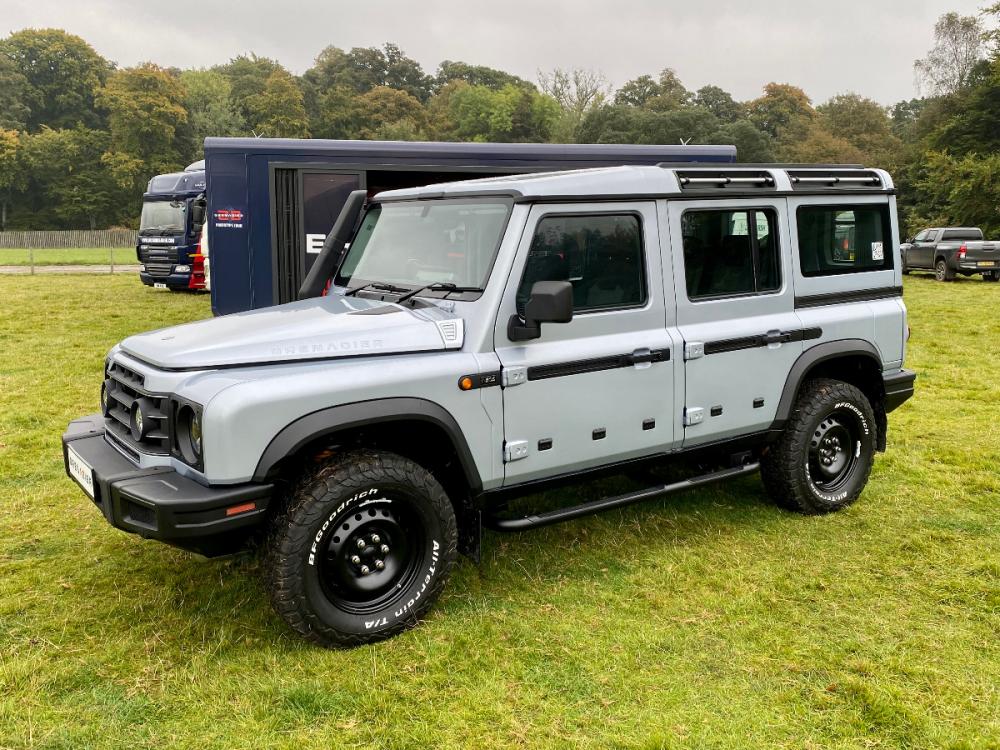 The experienced driver, clearly a dab hand at all things mud plugging, made it all look very easy, even on some of the steeper gloopier sections. I suspect we could have romped around just in drive without too much difficulty, but of course the low range settings were demonstrated.
We had no need to lock any diffs.

Without doing the Grenadier a disservice, the tyres will also have played their part, the deep grooves slicing through the mud.

Having recently spent a considerable amount of time off roading in a new Defender, it is interesting to note how well both get the job done. The Land Rover uses clever electronic aids to enhance its off-road performance, whereas the Grenadier prefers the more time-worn path of levers and a mechanical system. Digital or analogue?

On some of the more gnarly tracks, I can report that the Grenadier rides well, remaining composed at all times.
This should bode well on terra firma, something I was unable to experience even from the passenger seat.

So, who is going to buy the Ineos Grenadier? I can see farmers and builders warming to the idea, as it will be possible to specify a two-seat commercial version. A pick-up variant will follow at a later stage, and I wouldn’t bet against a smaller three-door model and a larger seven-seater.

I can also see cool, urban types buying Grenadiers, not perhaps what the company has in mind, but undoubtedly our cities are now heavily populated with large 4x4s whether we like it or not.

Online reservations are now open, so if you like what you see, now is the time to grab a build spot. The online configurator is available now too.

Prices, higher than I had expected, start at around £48,000, but if you want a five-seat passenger version as ‘tested’, then be prepared to up the ante by a further £6,000 or so. And no doubt you will want to personalise your Grenadier, so perhaps budget on an all-in price closer to £60,000. 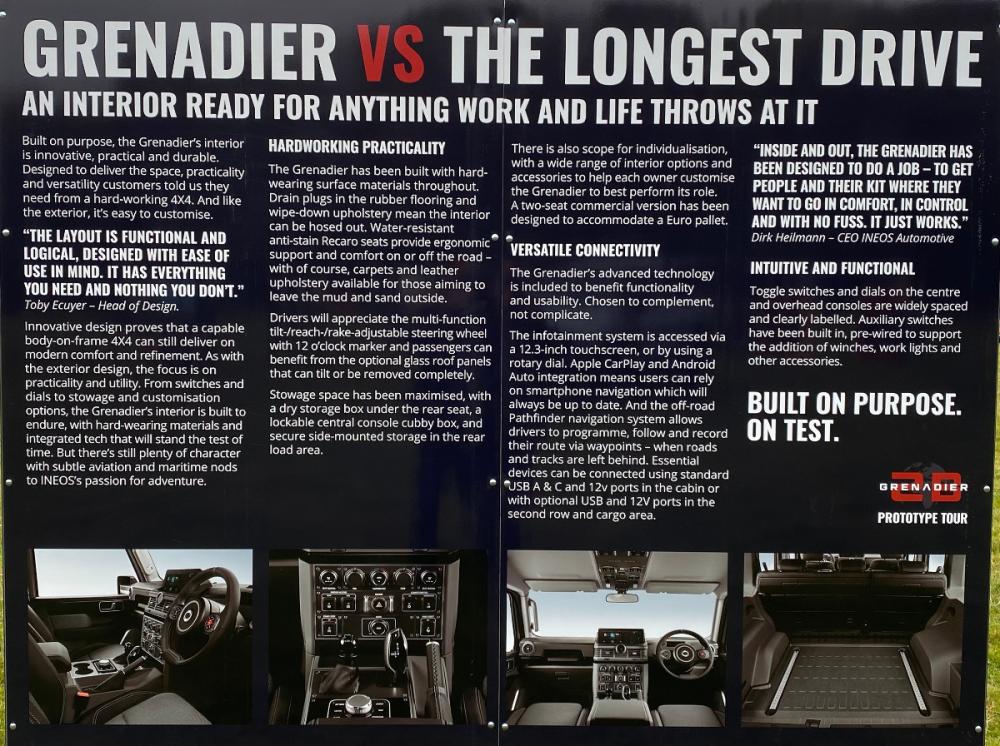 Ineos has yet to formally announce its brand partners, but I am told there will be sales operations strategically placed around the UK. Some will be the expected 4x4 specialists but expect also to find some agricultural suppliers taking on the franchise.

Servicing can be done at the dealers, but also at Bosch service sites.

It will be well into next year before journalists will be permitted to get behind the wheel. As a fan of off-road driving that is something I very much look forward to doing, but it will also be interesting to see how refined the Grenadier is as a road car.

So, favourable early impressions, a knowledgeable and engaging team of people keen to spread the word. More updates, as and when.
Also by Andy Harris...
Lotus Emira – A First GlimpseMorgan Plus Six – An Autumn TaleThe Range Topping Genesis GV80 On TestPreventing Car And Vehicle TheftRolls-Royce Wraith Black Badge – The Ultimate Grand Tourer