La Rioja showstopper: Gehry’s masterpiece. All images by Steve Hare
Consuming wine, evocatively described by Galileo, as ‘sunlight, held together by water’ is one of our greatest ways to celebrate, socialise, and savour its depth, breadth, and diversity.

As wine consumption rockets globally to over 23 billion litres annually, the UK is the fifth biggest partaker - just ahead of Spain whose Rioja region in the beautiful Basque country boasts 500 wineries.

The wine tasting lived up to expectations at the Marqués de Riscal vineyard and hotel where Gehry’s futuristic grand design of shimmering titanium dominates the landscape.

Founded in 1858, the vineyard is the region’s oldest bodega of the rioja label. It produces traditional-style Rioja wines, mainly made from the black tempranillo grape along with a white wine from Rueda – both are knockout.


Luscious: The Marqués de Riscal vineyard spans 500 hectares
If you are not staying at the hotel, (we rocked up in our motorhome, scrubbing up to look the part!) ask to have a drink in the hotel wine bar. Its far less chaotic and noisy than the bar in the shop which is situated away from the hotel.

Unless you are booked on a wine tour you will not see Gehry’s amazing artistry which would be a great shame. After a visit to the wine bar, we splashed out on lunch at the hotel’s 1860 Tradicion restaurant where the views over Elciego were as sensational as the cuisine. Highlights included Red Prawn Carpaccio, pimientos cristalizados and solomillo.

Enjoying a prestigious sixth position in the World’s Best Vineyards 2020 ranking, Marqués de Riscal makes around five and a half million bottles of wine every year. The first ever Rioja wine to be bottled, 60 per cent produced is exported to over 110 countries and all vineyards are organically farmed.


Vineyard views over Elciego
The vineyard is in the picturesque town of Elciego whose prominence has risen since Gehry’s showstopper, and which offers locals wines in bars and restaurants. Nearby vineyards, which we sadly did not have time to indulge in, include Finca Valpiedra, Berarte Vinedos y Bodegas and Bodegas Fos SL.


Driving force: wine turbocharges the local economy in Haro
Our next wine stop was Haro, capital of the La Rioja region where, every year on St Peter’s day, the most quirky, madcap festival takes place.

It sees locals and visitors engage whole heartedly in the spectacular Batalla del Vino (Battle of the Wine) wine fight, soaking each other from to toe in rioja wine.

The visual feast starts after participants, dressed in red, and white follow a local priest to cliffs out of town, listen to a short mass and then let rip with anything at their disposal to ensure a thorough drenching.

This festival roots, pardoning the pun, are said to date back to the 13thcentury over a local boundary dispute with a neighbouring village. Fast forward 800 plus years and hostilities set aside, the tradition remains a key calendar date.

Visiting Haro was thoroughly enjoyable, especially wondering around the main square - the heartbeat of the town - where locals and visitors mingle amicably to sample delicious wines and mouth-watering tapas in the local bars. 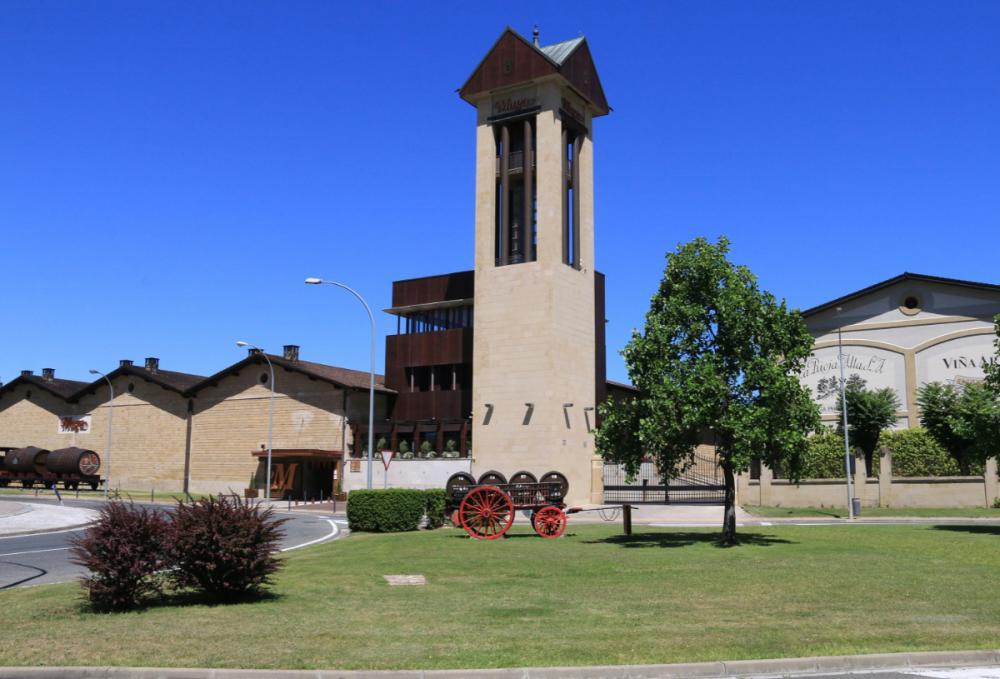 Family heritage: Bodegas Muga produces eleven different wines
Fortuitously our campsite was within staggering distance of a group of bodegas, including Bodegas Muga, located in the station quarter where we decadently partook in wine tasting at 11.30am.

Our knowledge of wine is far from extensive, and we loved learning about the back stories of the production and the evolution of the businesses, which are steeped in tradition and predominantly family owned.

Bodegas Muga’s stylish ambience makes it pleasure to linger over a flight of different wines. Established in 1932, it jointly owns and controls almost 1,000 acres of vineyards, producing eleven wines with red grape varieties including Tempranillo and Grenache and Viura and Malvasia for the white.


Happy days: Bodegas Muga welcomes visitors worldwide
We spied family members from the older generation in the bar which spiced up the visit as we agonised over what to take home on our imminent ferry trip from Bibao to Portsmouth.

Steve was delighted with his trio of Rioja Muga Reserva with its swish box surprisingly unopened. Having said that, we have only been back in England for less than two weeks!


Divine: Tapas and wine
Our last destination, bellissimo Bilbao, was even more amazing than our last visit when the spectacular Guggenheim, Frank Gehry’s most famous work, was our primary focus.

After scratching the surface with a taste of the Rioja region, meandering in our motorhome through central to Northern Spain, this time the focus was immersing ourselves in the social buzz of the Basque country’s biggest city.

Friday night was party night as the weekend took off with a bang. Without any destination in mind, we joined the throng and bar hopped, a favourite pastime of the ebullient Bilbainos and their compelling culture.


Vibrant pinxto are permanently displayed in bars
Going native, we demolished pinxtos, the Basque country’s version of tapas which go down a treat with a cold white wine or moorish cava. They comprise small plates of mouth-watering dishes including salted cod (bacalou), croquetas and chorizo y Manchego.

Somewhat jaded but elated with our latest adventures, we reluctantly boarded the ferry home the next day.

We’d had such a grape time that we’re already researching a new motorhome trip through parts of France including the Loire and Bordeaux. It would be rude not to do justice to the cava in Spain’s magnificent regions including Catalonia and Valencia. We may be away for a while – salud!
Also by Sharon Cain...
Global Sensation: Flowers That Tower And EmpowerAscending New Wellbeing Heights In ParadiseWanna Be An Extra? Morocco’s Movie Making MagicLisbon: The Ultimate Lifestyle DestinationTake The Hump Or Make The Jump?