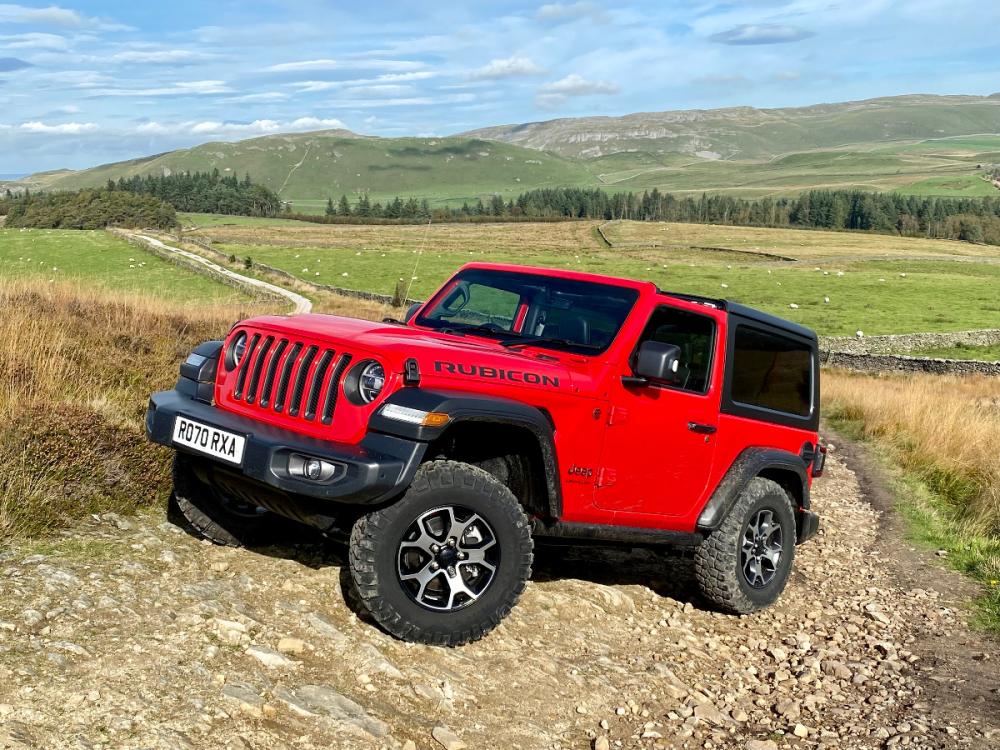 Think off-roader and two manufacturers immediately spring to mind. Land Rover is of course our home-grown offering, but from across the pond there is Jeep.

Best known is the Wrangler, the looks of which hark back to the Willys that began production during World War II and then became known as Jeeps. I gather that over 650,000 military Jeeps were manufactured and I was lucky enough to drive one around a car park some years ago. Another one off the bucket list ticked! But I digress… 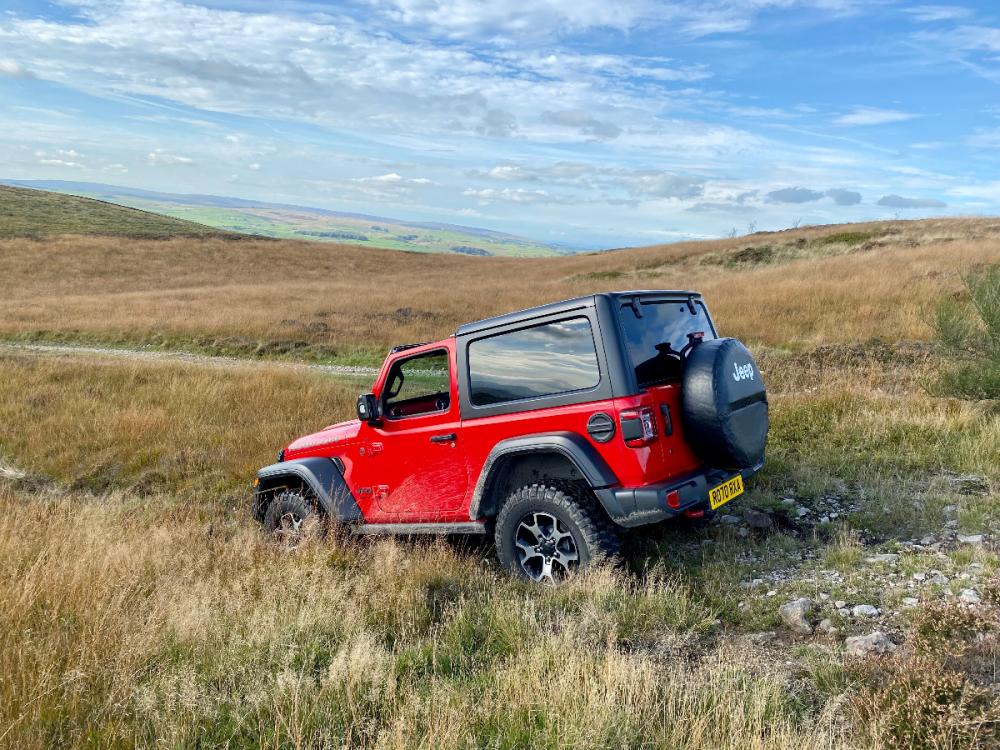 Jeep has created a hardcore Rubicon variant of the Wrangler, reason enough for me to get behind the wheel once again.

If you like to get noticed, head down to your nearest Jeep showroom and sign on the dotted line. Rarely has a test car attracted so much attention, all positive. One or two of the admirers I spoke to did rather baulk at the price however… A good PCP deal and all will be fine. 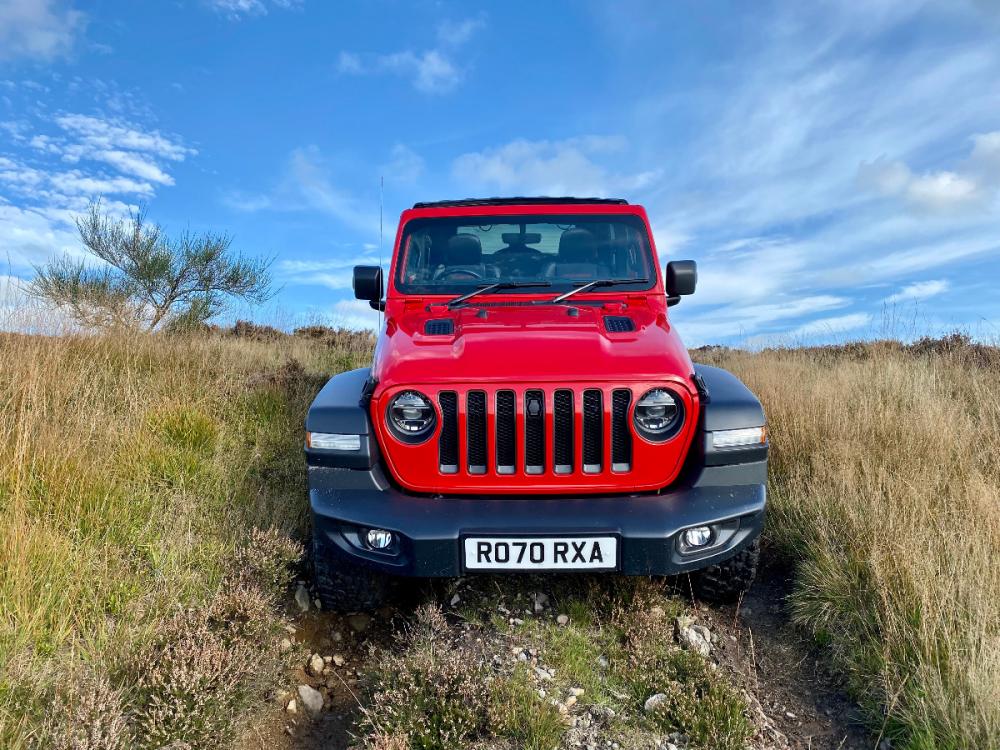 The go-anywhere looks would count for nothing if the Wrangler was not capable in the rough stuff. I can happily report that the Jeep will keep going long after most drivers have lost their bottle and turned around to find an easier route.

How do I know? Well on the UK media launch a few years back, Jeep had the assembled throng tackling boulder-strewn Lake District tracks that would have challenged a mountain goat!

Whether anyone actually needs such hardcore capabilities is debatable, but sometimes just knowing that you can is what counts. 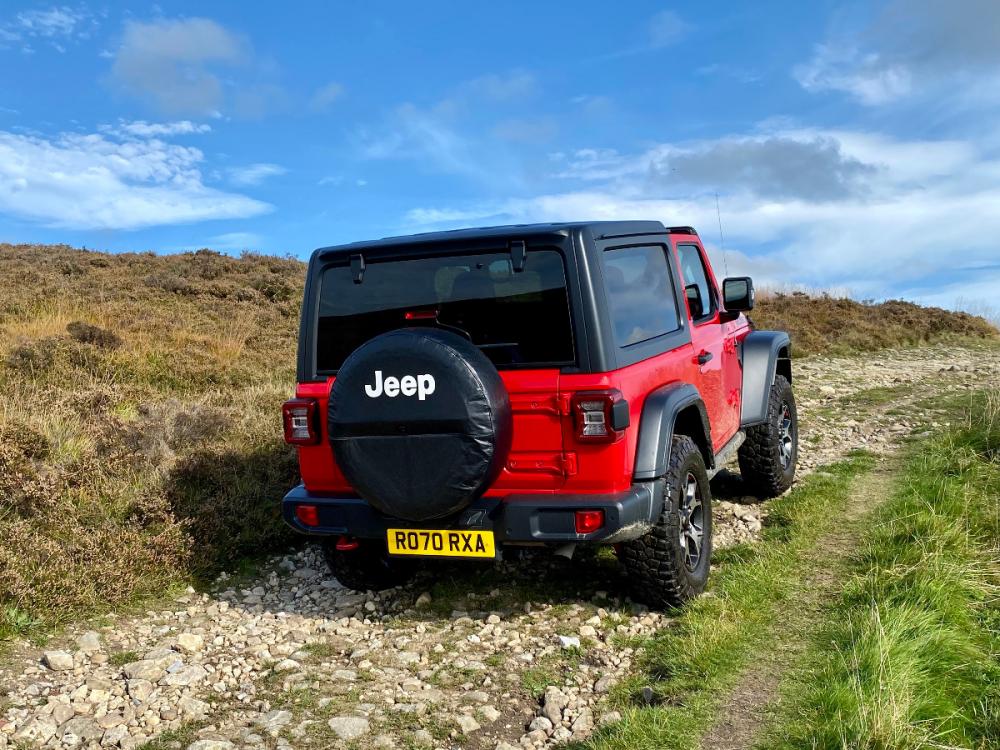 The Rubicon ups the ante still further with a bewildering array of locking differentials, for use in extreme conditions. BF Goodrich Mud Terrain tyres are fitted too, great off road, a tad noisy on it.

During my week in Yorkshire, I took the Wrangler on some of my more challenging local routes. Needless to say, it tackled them with aplomb, locking diffs not required. To get a Wrangler Rubicon stuck, you would probably need quicksand or a sinkhole…

On the road, the petrol engine gives the Wrangler a surprising turn of speed. All that firepower is readily accessible, and the automatic gearbox shifts cleanly and smoothly. 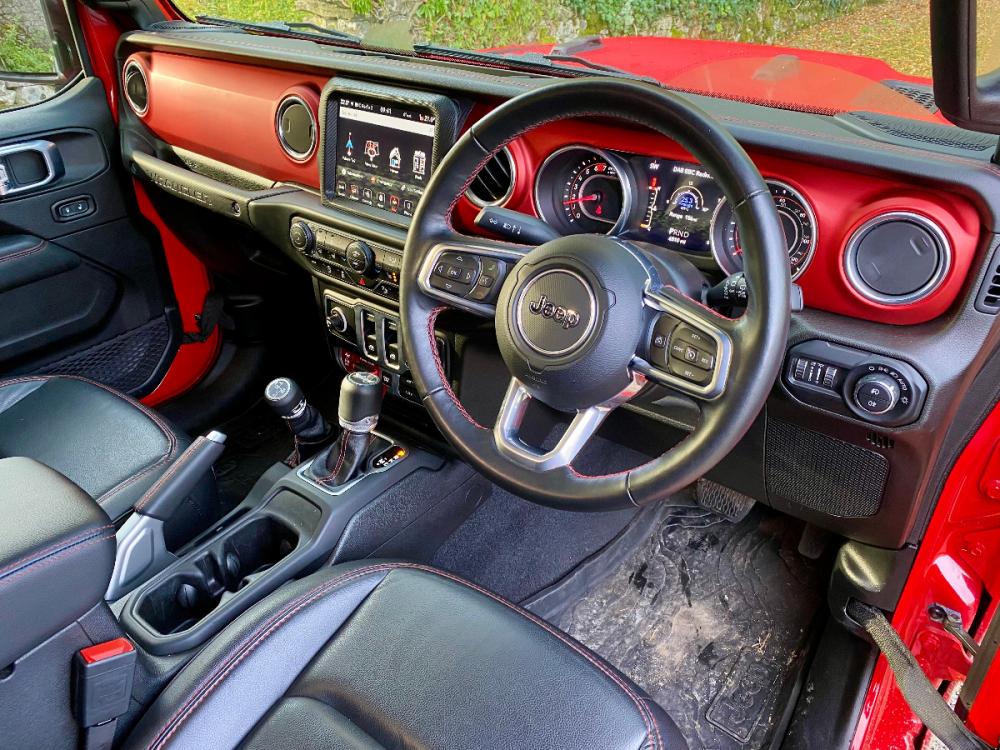 Motorway cruising was reasonably relaxed, though wind and road noise do rather intrude – not its natural habitat.

Fast A and B-roads however were surprisingly good fun. In isolation the pronounced body-roll should be a demerit, but I must confess it rather added to the challenge of piloting the Jeep and certainly keeps you on your toes.

The ride can be on the choppy side, all that off-road prowess does come at a price.

The driving position is a somewhat compromised in right-hand drive form and I found my left leg aching due to lack of a support. 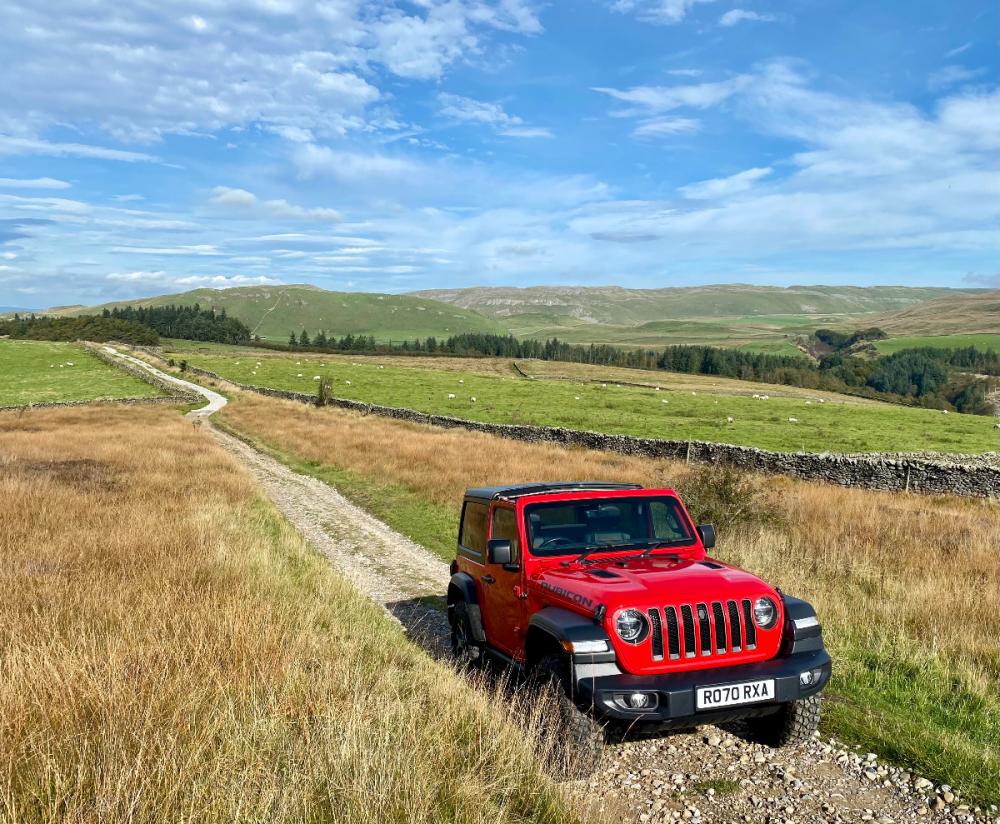 Economy over the test period was rather disappointing. I struggled to break 25mpg, even when not driving in my usual exuberant manner.

With a spell of fine weather accompanying the test period, I removed the two separate roof panels that cover the front compartment. Once you have the knack, this can be done quite quickly but being tall helps. Jeep handily supply a storage bag to put them in, but without the necessary origami skills, they were carefully placed in the load bay with a blanket to protect them.

With the roof panels removed, all is well up to about 40mph. Anything above and it all gets rather blustery and noisy.

For the brave, you can of course remove the rest of the roof, not a five-minute job I would imagine. 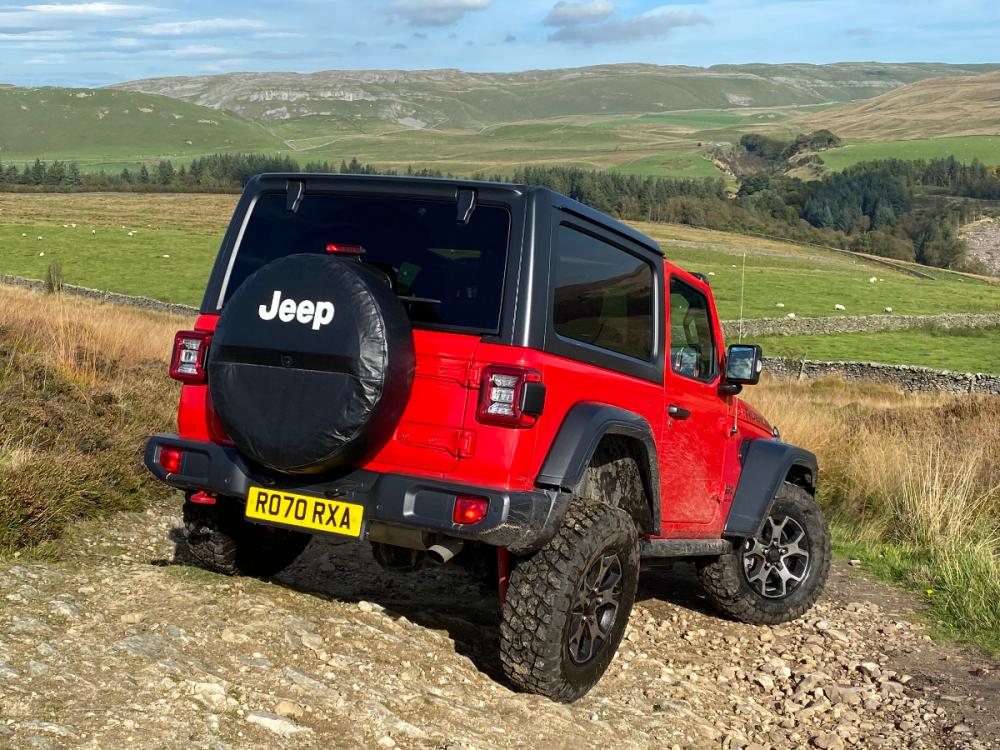 Rubicon-spec brings with it all the bells and whistles you would expect, premium low back leather bucket seats, an excellent audio system, climate control and much, much more.

Those reading this review carefully might have already concluded that I was not a huge fan of the Wrangler as it clearly has its faults. 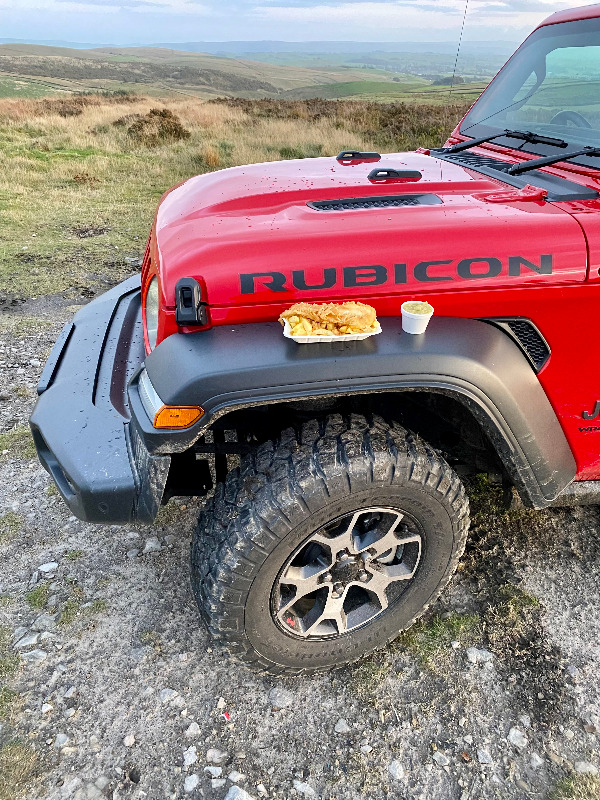 The reality is that nothing could be further from the truth. I enjoyed every mile travelled and gazed longingly as the collection driver disappeared out of view at the end of the test period.

The Wrangler gets under your skin, charms with its looks and capabilities and rather like a classic car, you easily overlook its foibles.

I love off-road driving and have always had a penchant for convertible cars too. The Wrangler ticks both boxes and if you are a bit of a poser behind the wheel, then you will relish the admiring looks the Rubicon brings, especially if you specify Firecracker Red paint.

If more space is required, Jeep do a long-wheelbase five-door version, but that’s not for me.
Also by Andy Harris...
Lotus Emira – A First GlimpseMorgan Plus Six – An Autumn TaleThe Range Topping Genesis GV80 On TestPreventing Car And Vehicle TheftRolls-Royce Wraith Black Badge – The Ultimate Grand Tourer