Keep Digging: The Night She Disappeared by Lisa Jewell 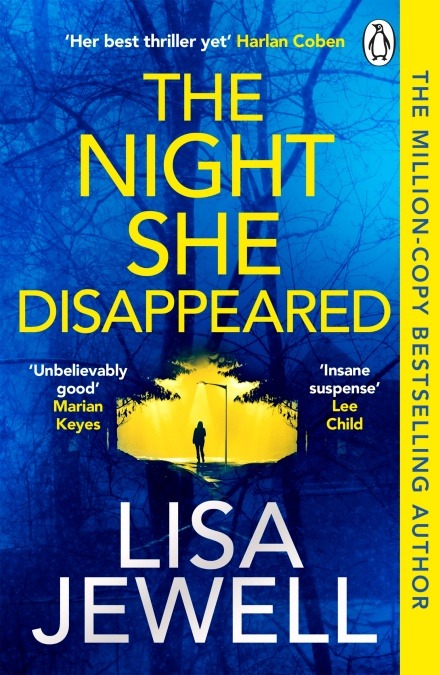 The prologue, a vivid definition of arachnophobia, did give me cause to hesitate. What was I doing reading a novel like this? I don’t like frightening psychological dramas and I definitely don’t like creepie crawlies. I empathized with Sean Connery in Dr No when the tarantula crawled over him – his fear was real, apparently – and I don’t like the trials in I’m a Celebrity – you’ll know the ones. I didn’t need to worry in this case, though - the spiders were not the most fearsome aspect of this novel. Humans can be far worse.

What would you do if your daughter went out for an evening and simply didn’t come back? Left no trace. No sightings, no bank cards used, no body found. Just vanished? How long would you go on hoping, believing?

The Night She Disappeared begins slowly, but the chilling atmosphere is nurtured early on. Nineteen-year-old Tallulah goes out for an evening with her live-in boyfriend. It is their first night out together in months, a date night, and they leave her mother to babysit their baby son, but neither Tallulah nor Zach return. Kim, Lula’s mother, does what she can to find out what has happened. She contacts her friends and it appears Tallulah was last seen going to a pool party at a mysterious nearby mansion, appropriately called Dark Place, home of fellow student, Scarlett Jacques, but there the trail ends. Yes, Lula and Zach were there, but it seems, they left. Eventually, Kim files a missing person’s report with the Police who suspect the teenagers have simply cast off their responsibility for the baby and run away, but Kim knows her daughter. She knows that despite the difficulties of being a young mother, Tallulah would never abandon her baby. She is convinced that all is not as it seems and fears the worst.


Jewell not only creates a mystery to be solved but also explores human relationships...This thrilling narrative has it all.
Kim's sense of loss is palpable and the mystery behind the disappearance is compelling. With each chapter, more questions arise, and as other characters are introduced, it seems each is hiding a piece of the puzzle. The subplots are subtly inserted and cohesively woven into the fast-paced ending.

Alternating between different timelines, and narrating from different perspectives, Jewell successfully lets the reader in on the events leading up to the disappearance of the two young people and follows the investigation when the cold case is later reopened. Interest has been reignited by a mysterious sign in the woods, ‘dig here’ which reveals a small box, buried just a little way down. It’s found by a writer of ‘cosy mysteries’, who has recently moved into the area. Sophie, has exchanged her single life in London for life as the partner of the new headteacher at Maypole House, a boarding school in a more rural part of the world, and she has time on her hands. She becomes intrigued and follows her instincts. She hears about the disappearance of Zach and Talullah, which took place over a year ago, and something tells her that this is a clue to what happened. Her investigations into the ownership of the box lead her to Kim who may, after all, get the answers she craves.


What would you do if your daughter went out for an evening and simply didn’t come back? Left no trace...
Jewell not only creates a mystery to be solved but also explores human relationships. Mother love, parenting and step-parenting, coercive control (both masculine and feminine), narcissism, teenage sex and sexuality, loyalty and doubt, self-preservation, money and privilege versus the everyday man in the street, conscience and amorality – it’s all there. The effect people have on each other, the care they show one another and the utter selfishness which may take precedence. This thrilling narrative has it all.

The characters are vivid, colourful creations who are not always what they seem. There is a depth to them which becomes apparent as the layers are peeled back, and the reader can’t help but make an emotional investment in the people they get to know: sympathy and understanding for some, an increasing dislike for others. There is a critical observation of human nature and its many nuances, which we can all recognize. This is emotive storytelling, well-crafted and compelling.

The Night She Disappeared is published by Penguin.
Also by Artis-Ann ...
Senoy, Sansenoy And Semangelof: When I Close My Eyes By Jemma WaynePerhaps, Perhaps, Perhaps: The Christie Affair By Nina De GramontScarred, Possibly Scared: Prague Spring By Simon MawerSaying One Thing, Thinking Another: The Undiscovered Deaths Of Grace McGill By C. S. RobertsonPainting Over The Cracks: Trio By William Boyd