Lessons From The Past: A Retrospective Of Mary Shelley’s The Last Man 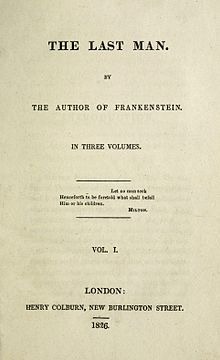 First edition front cover
Mary Shelley’s The Last Man (1826) has the dubious honour of being the first apocalyptic fiction, as well as the first literary “dystopia”, some 42 years before the word was even coined. It describes a future society, ravaged by the depredations of plague.

The Last Man is astonishingly prescient, citing concepts and expressions now in common usage with regard to our own experience of pandemic. We describe the Coronavirus as a “great leveller”, due to the manner in which it reaches out to all, without prejudice. In Last Man, this terminology is presaged by the character Ryland: "Death and disease level all men”. We also speak of COVID-19 as an “invisible killer”, and Shelley, too, refers to her plague as the “sightless enemy” and an “impalpable … foe”. Certainly, it’s easy to be complaisant when you’re contending with an adversary you can’t physically see, when you head out and day-to-day life appears business-as-usual. Doubtless if our own bespoke devil were incarnate – a slobbering, wild beast – we’d all be adhering diligently to the stipulations of lock-down without a second thought!

The Last Man opens in the year 2073, yet despite its futuristic setting, Shelley describes a world still very much of her own time period, with people on horseback, and battles fought by bayonet and canon. One example of advancement does stands out, however:

“[T]he discoveries of science had augmented in a ratio which left all calculation behind; food sprang up, to say, spontaneously – machines existed to supply with facility every want of the population … [Yet] men were not happy … because they would not rouse themselves to vanquish self-raised obstacles”.

This description of a human race reliant entirely upon the munificence of a quasi-planetary supercomputer eerily prefigures E. M. Forester’s vision in The Machine Stops by some 102 years, and in turn Asimov's Multivac by a further 27. But, overall, don’t be expecting Wellsian levels of futuristic world-building, with descriptions of shimmering skyscrapers, a populace clad in multicoloured robes, and elaborate flying machines. You won’t find them here. Shelley’s conception of the future is figured more in terms of sociopolitical and ideological change, particularly Republicanism, and arguably the plague stands as metaphor for the rot in idealistic but flawed men. Take Lord Raymond, the champion of the people, who is found to be guilty of infidelity; also the abolitionist Ryland, who succeeds to the office of Lord Protector, yet pusillanimously renounces his title as soon as the plague hits Britain’s shores.

Shelley’s plague turns the world of the Romanic era upside down. A period which typically celebrated the beauty of nature instead sees the natural world depicted in scenes fit for the Book of Revelations:

“In the inky east two vast clouds met ... [L]ightning leapt forth, and the hoarse thunder muttered … [T]he forked stream of fire running along the black sky, showed us the appalling piles of clouds, now met and obliterated by the heaving waves” 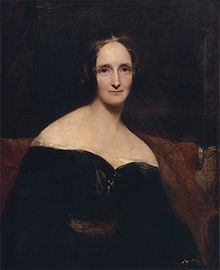 Mary Shelley by Richard Rothwell
...and as the plague makes its first appearance in the second volume of Last Man, it does so under the auspices of a “black sun”. For me this distortion of the natural world, in all its fantastical imagery, is a pertinent reminder of how nature is always beyond man’s control. Regardless of the advances we make in terms of medicine, we will always be beset by a new strain of virus. We may fancy ourselves indestructible, but nature will always keep us in check. As Shelley herself states –

“Nature … showed us plainly … though she permitted us to assign her laws and subdue her apparent powers … if she put forth but a finger, we must quake”.

It is interesting to see, as man retreats indoors, how soon Mother Nature fills the void. In Last Man, we see horses trampling through the abandoned palaces of man. In film also, for example 12 Monkeys, we see Bruce Willis, clad in an elaborate bio suit, roaming a dead city, with only escaped zoo animals for company. In real life, kangaroos have been seen hopping about the streets of Adelaide, coyotes have been counted in San Francisco, ducks and fish have flooded the now empty waterways of Venice, and wild boar observed in the boulevards of Barcelona. Closer to home, as I take my evening exercise, I myself have glimpsed the occasional deer, as well as countless urban foxes, making their rounds. And these have certainly been pleasant and refreshing sights to to see in these difficult times!


Also by James Goodall...
The Digital Cage – What Price Progress In H. G. Wells’ The Shape Of Things To Come And Heather Child’s everything About YouWhat Is Alien? Bridging The Abyss In The Man Who Fell To Earth And Under The SkinOur Man in Havana: A Very Unconventional Spy StoryLockdown Discoveries: Character And Class In Jane Austen’s EmmaSci-fi For Our Times: Rediscovering The Body Snatchers And Roadside Picnic
As the plague rips through Britain like a tide of fire, we see Last Man’s protagonist, Verney, retire to Rome for sanctuary, as well as edification, taking in the architecture, libraries and artworks of the great city. But he quickly comes to realise such pursuits are futile without companionship and a fellow man with whom to share his knowledge and learning: “Would not one living man … be worth all the glory and remembered power of this time-honoured city”. And thus the words of the novel’s opening are recalled: “[M]an’s mind alone was the creator of all that was good or great to man”. In other words, the history and achievements of man are meaningless without the mind of man to perceive and appreciate them. Such a sentiment I can’t help thinking is recalled to a degree in another – if not the archetypal – dystopian fiction: Orwell’s 1984. Here, similarly, the interrogator O’Brien reminds Winston Smith that the Ingsoc Party effectively controls man’s perception of reality, therefore there can be no resistance to it: “[W]e control human nature. Man is infinitely malleable”. And, just by way of uncanny coincidence, Winston is even dubbed the “last man” as he, like Verney, is finally left alone and defeated.

But all is not lost for Verney. Though the plague whittles humanity down to the eponymous “last man”, he himself does not die, and we leave him to continue his search for others. In the end, he must keep going, and this is a good rule of thumb for us all to live by at present. Guess I can wait that little bit longer for a haircut during lock-down then!

The Last Man is sorely underrated and little known today. It has doubtless been overshadowed by the legacy of Shelley’s more acclaimed masterwork, Frankenstein. The Last Man also opened to poor critical reception in 1826, largely for dealing with themes of apocalypse and dystopia which were radically new for the time. The novel, however, is in drastic need of reappraisal, and in a time where parallels can so easily be drawn between the presentiments of Shelley’s text and the experiences of our own present-day predicament some two hundred years hence, there has never been a more appropriate time.