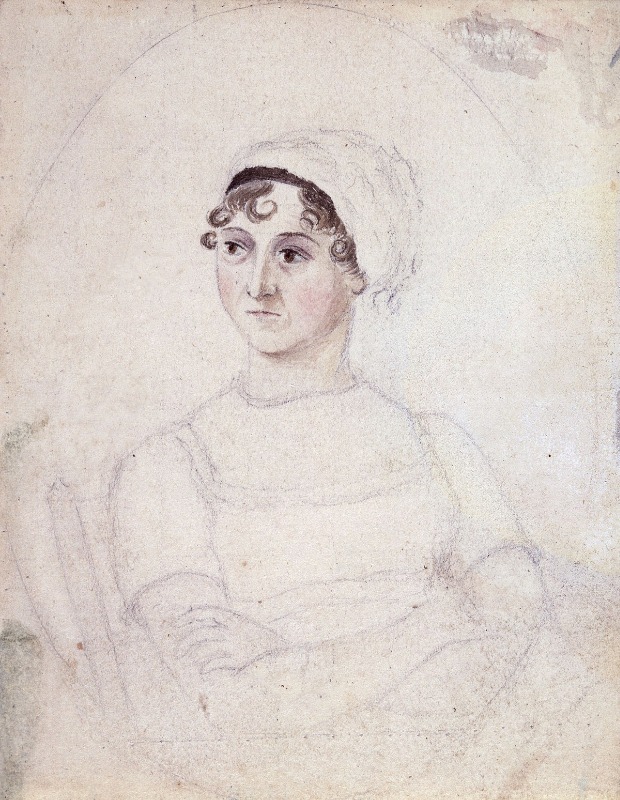 Portrait of Jane Austen. c.1810
There is something reductive about treating a canonical classic, such as Emma, to a short analysis. I ask myself, what more can an incidental review from a new reader hope to add, where tracts of literary criticism have already expounded more fully? And you may wonder how a Romantic era fiction, dealing with affairs of the heart, might appeal to a thirty-something lad from Yorkshire, who likes nothing better than an action movie and a swift half down his local!

Well, a great deal as it turns out. For me, this has proven one of the few positive experiences of lockdown – the opportunity to catch up on the old classics. Firstly, it is helpful to know from the outset that you are dealing with a flawless masterpiece, which should be incentive enough for any prospective reader. Indeed, you can’t help but be affected by the power of each page. And you don’t need to do any further reading to understand why this is the case. The greatness of Emma is self-evident in every throbbing line, just as Citizen Kane shows you with each frame why it is revered as the greatest film ever made.

The first thing you will notice in Emma is that each sentence flows and spools on the page like liquid gold. There is no contrivance here, just effortless brilliance. The text is impervious and virtually attack-proof. As Virginia Woolf noted in her extended essay, “A Room of One’s Own”, in homage to Austen’s take on nineteenth century syntax, “[She] looked at it and laughed at it and devised a perfectly natural, shapely sentence proper for her own use and never departed from it.”

Plot-wise, we are informed from the outset that our eponymous heroine, Emma Woodhouse, is in no want of comfort or security. The premise, therefore, isn’t a race for survival, unlike that of, say, Pride and Prejudice; there is no pressing need to snare an eligible bachelor, in a neighbourhood where only two or three such personages appear to congregate at any given time! Emma’s attentions are instead transferred to her immediate social circle, in which she has positioned herself as a self-styled matchmaker. The only issue is that her advice is often misguided, which in turn leads to disastrous consequences.

Congratulating herself on having secured a husband for her former governess, Emma is in need of a new assignment. Consequently, she befriends one Harriet Smith to this end. In a particularly gruelling scene, in which Harriet announces a marriage proposal from a gentleman farmer, Emma spares no effort in advising her against the match. Her treatment of Harriet in this scene is brutal to behold. No blow is levelled, nor a harsh word uttered, yet the received impression is as close to a torture scene as any Tarantino might script. Her slow breaking down of Harriet’s resolve through calculated attrition is punishing to read. The final moment where Emma personally dictates Harriet’s letter of rejection is simultaneously cruel and hilarious: “[T]hough Emma continued to protest against any assistance being wanted, it was in fact given in the formation of every sentence”.

Instead, Emma believes that Mr Elton, the local clergyman, will be a more fitting suitor, despite the pair being mismatched entirely in terms of social status. Inevitably, Elton is incredulous at such a proposition and publicly snubs Harriet. Harriet herself then turns her attentions to Mr Knightley, a friend of the Woodhouse family, only for Emma to then see her as rival and take every measure within her power to secure Knightley for herself, thus dashing her friend’s expectations for the third time. As she reflects covetously, “It darted through her, with the speed of an arrow, that Mr. Knightley must marry no one but herself!” 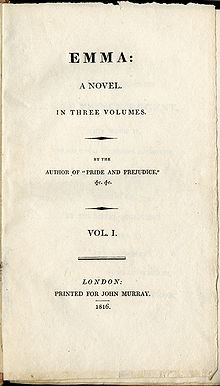 Title page of first edition of Emma
Consequently, we see a balanced narration in the novel, which bears Emma’s true nature, warts and all. At times she can be wonderfully acid-tongued and conceited, and this verisimilitude of character makes Emma a refreshing paragon of credibility. It is perhaps no coincidence that Austen felt she had portrayed “a heroine whom no one but [her]self [would] much like”. But for all her failings, Emma is not a monster. As her character develops, she learns the error of her ways and repents deeply: “She was afraid she had done ... nothing but disservice ... With insufferable vanity had she believed herself in the secret of every body's feelings; with unpardonable arrogance proposed to arrange every body's destiny”. The novel is therefore a Bildungsroman in which we see Emma’s character transition through experience. This moment of self-reflection makes Emma appear less the flawless heroine and more human. Consequently, we can forgive her. Certainly, we don’t wish to see her alone at the end of the novel! In short, we are treated to a fully rounded anti-heroine.

In fact, there are no stock characters of any kind in Austen’s story. Take Emma’s father, Mr Woodhouse – so wonderfully careworn, as we can read from his early praise of a servant girl: “I observe she always turns the lock of the door the right way and never bangs it”. And yet he is by no means one-dimensional in this respect; he is also the doting father to his two daughters and the perfect neighbour to his friends. There is Mr Knightley, whom at first glance appears the obligatory Mr Darcy substitute, though a little less prideful, but is much more than a mere love interest, acting as Emma’s moral compass and a constant check for her. Also Mr Elton, who at first is presented as a gushing, wet-behind-the-ears admirer, yet, once spurned, transforms into a supercilious, mean-spirited semi-villain. Even Miss Bates, who may appear initially as a loquacious comedy character, also acts as a vital conduit of information, engineering plot developments and delivering news updates like milestones. Harriet, too, is by no means an empty vessel, demonstrating great resilience in the face of her various misfortunes, before finally marrying her gentleman farmer. Part of me hoped she might even metamorphose into the ultimate worm-that-turned, unleashing a stream of invective at the novel’s climax! But alas, no, she remains self-effacing and a true English rose to the very end.


Also by James Goodall...
The Digital Cage – What Price Progress In H. G. Wells’ The Shape Of Things To Come And Heather Child’s everything About YouWhat Is Alien? Bridging The Abyss In The Man Who Fell To Earth And Under The SkinOur Man in Havana: A Very Unconventional Spy StoryLessons From The Past: A Retrospective Of Mary Shelley’s The Last ManSci-fi For Our Times: Rediscovering The Body Snatchers And Roadside Picnic
Class is an important theme in Emma. It is the gravitational force which guides the lives and bearing of all its characters, as well as their respective places in society. People are judged solely in terms of their social station. Harriet, for instance, is not merely seen as ill-matched but a positive danger to Knightley: “Such an elevation on her side! Such a debasement on his! It was horrible ... to think how it must sink him in the general opinion ... for a man of first-rate abilities to be captivated by very inferior powers”. Harriet is not vilified through any want of character – she is practically goodness incarnate; it is simply on account of her upbringing, education and undetermined parentage. Her virtues as an individual are secondary, it seems. Doubtless if her inheritance were specified, and a few more zeroes added to the document for good measure, this would suffice to exonerate her, and rank her amongst the best!

The conventions of the day are upheld by every character and perpetuated also by the third person narrator, not merely by Emma herself. Yet, is impossible not to suspect that Austen, in depicting it so acutely, was in fact exposing the cynical convention for what is. For instance, her apparent sideswipe at the formidable Mrs Churchill – possibly the staunchest advocate of rank and file, whom we never encounter in the flesh, yet rules the lives of her fellow characters from her seat in Yorkshire with an iron fist. We in fact discover that “she has no pretence of family of blood ... [and] was nobody when ... [Mr Churchill] married her, barely the daughter of a gentleman.” And this makes for an interesting twist, putting one in mind of Oscar Wilde’s Lady Bracknell in The Importance of Being Earnest – another domineering matriarch in literature, whom we similarly discover had “no fortune of any kind” prior to her own marriage. It suggests that Austen wasn’t party, here, to the cut-throat convention of reducing individuals to currency, negating all other attitudes and values in the process.

You could argue that Austen even makes light of one of her own conceits in this respect. There is invariably the young socialite in her work, with a readily disposable income, of which £10,000 is the inevitable yardstick. In Emma, we are told “[t]he charming Augusta Hawkins, in addition to all the usual advantages of perfect beauty and merit, was in possession of an independent fortune, of so many thousands as would always be called ten”. It seems as if Austin is parodying herself in this passage, as if she were aware of one of her own idiosyncrasies, and sharing the mirth!

As we might suspect, the text is replete with numerous lessons for life. The line, “What is right to be done cannot be done too soon”, I wouldn’t mind commissioning in tapestry form, with gilt lettering, and displaying it on my wall as a ward against procrastination!