Meat:Stack – The Meat Is On

Like myself you might think that there are enough fast food restaurants in Leeds city centre though I think you will discover if you visit Meat:Stack that they are very different from their competitors. 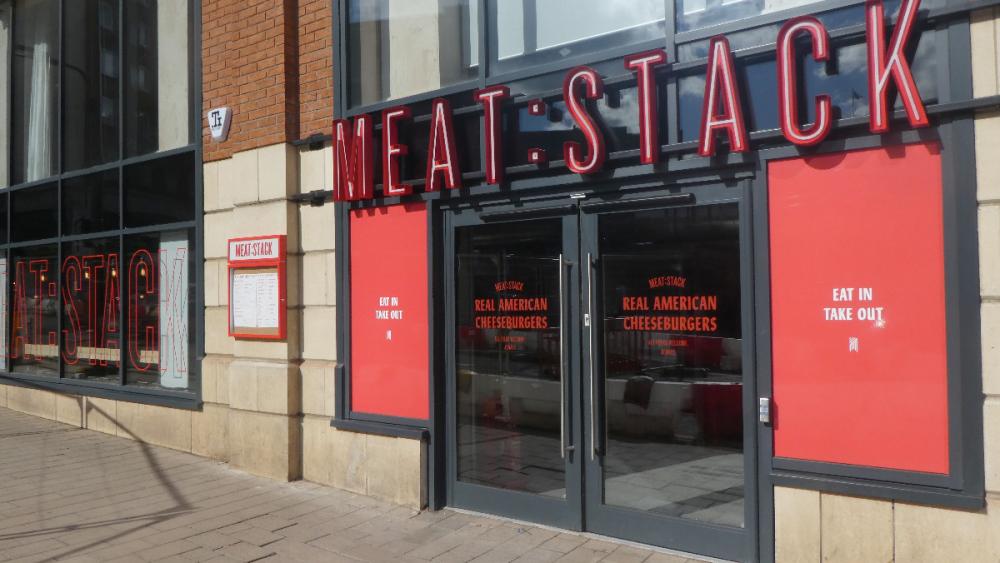 The first thing is the location – the new Leeds restaurant is located just outside the main train station.

The second is that they offer real American cheeseburgers that are smashed, steamed and served fast. Apparently they source the best beef available from rare and traditional breed cows using a local butcher in Newcastle whose meat comes from Northumberland, County Durham and North Yorkshire.

The choice selection of cuts is mixed into patties, smashed into a raging hot grill, then covered in cheese and stacked in doubles or triples, then steamed to melt everything together, which you can witness in the open kitchen.

Like most modern restaurants the interior of the new Leeds branch is on the stark side: red brick walls, long bench like tables and a bare concrete ceiling. What is lost in ambience is compensated by some of the meatiest and tasty cheeseburgers I have tasted.

The titles of the cheeseburgers come with tempting names such as West Coast Classic, New Mexico and Slugger. They could have named the cheeseburgers with names closer to home though I suppose Tynemouth or Geordie don't have the same ring to them.

One of Meat:Stack's most popular burgers is the French Canadian which comes with Stack Sauce, streaky bacon, blue cheese, garlic butter, chilli-maple syrup, hash brown and American Cheese. It is not cheap though as a double sized version costs £9.00 with the triple version being £11.00. Add £3.50 to either price to include fries and refillable soda, which is more reasonable.

With all these flavours I thought that the actual taste of the beef might be lost, quite the opposite - the juices of the freshly cooked patties oozed over my fingers and the taste of the meat revealed itself – no wonder all meals are served with a wet wipe. The French Canadian cheeseburger was a meal in itself though the triple cheese fries served on the side looked slightly lame in comparison when served in a plastic dish alongside a massive cheeseburger.

If you have any space left then a selection of soft serve ice creams is available at £3.50.

The new Leeds venue will be based in Bishopgate Street, at the 34 Boar Lane building. It will open on Friday, June 10 with the first 100 customers getting a free meal - the new eatery will open its doors at noon that day.

https://www.meat-stack.com/
Also by Graham Clark...
Pete Tong And The Heritage Orchestra Shine With The Ibiza ClassicsLet’s Rock - The Retro Festival Celebrates The Music Of The Eighties In Fine StyleNile Rodgers And Chic Give A Piece Of The Good TimesDownload Festival Welcomes Home The Rock CommunityInterview With Kirsten Branston From Bradford Live On Winning UK City Of Culture 2025 Bid