Chris Goddard. Photo copyright Jamie Cook
Chris Goddard is someone I’d imagine many seasoned walkers in the Yorkshire will have heard of - his books explore our beautiful county, guiding readers along obscure woodland pathways and lesser-trodden moorland expanses. Beautifully illustrated, with bespoke hand-drawn maps, Chris renders the landscape more accessible to walkers of all kinds, and I’ve yet to follow a route of his that disappoints.

It seems only fitting, therefore, that one of his earliest memories should be of climbing Cadair Idris as a child. This spectacular Welsh mountain is famed for its inherent beauty, as well as the dramatic yet mesmerising views it offers. For Chris, aged 8, despite the mist depriving him of a view, he fell in love with mountains, and told me he enjoys ‘scaring himself’ upon summits.


Copyright Mick Ryan at fotoVUE
For me, using Chris’s hand drawn maps alongside a standard OS Map has given me the confidence to venture onto open access land – being an entirely analogue navigator, I don’t have the benefit of GPS pinpointing my position precisely. Chris, remarkably in the current era, is also entirely analogue when out in the field. His mapmaking methodology uses a printout of the 1850s 1st series OS Maps, which he overlays in pencil to mark what the current landscape looks like in comparison to what was recorded back then. He finds it helps him to navigate old routes and to locate old settlements and other features now lost to history. Chris has drawn maps all his life, beginning by mapping the woodland behind his childhood home in Sheffield, marking out their secret dens and hideaways. He has never taken any formal cartographic training, instead relying on his own eyesight and judgement when surveying the landscape. Luckily, he can retain a lot of information in his head, useful for when the rain inevitably transforms his paper maps to mush!


Chris Goddard. Photo copyright Bruce Coutts
Chris offers some comfort to those less well-versed in navigational skills – he admits he has often ‘gone wrong’ but stops short of admitting to getting hopelessly lost. He says “It’s all about how quickly you work out you’ve gone wrong and where you’ve ended up going instead.” But, he has in the past followed the wrong end of a compass, despite knowing that red most definitely indicates north. And he too has fallen foul of the endless pockets rucksacks provide to safely stow away our valuables – last summer saw him pleading with a bus driver on the seafront of Weston-Super-Mare, having discovered he’d lost his wallet, and with no money for the twenty mile return journey. Hastily downloading GooglePay to his phone, he managed to make payment before being cast off the bus, only later to discover said wallet hidden in the backpack’s secret pockets. 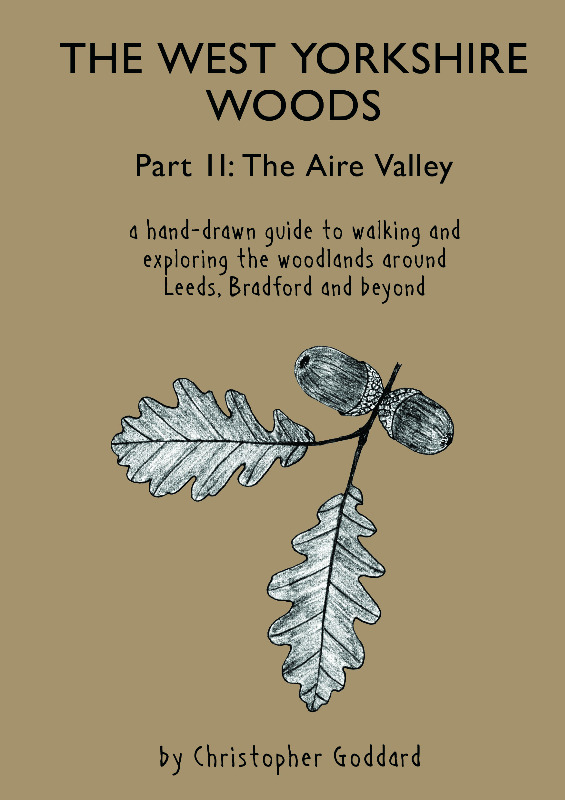 His new book, The West Yorkshire Woods: Part 2 – The Aire Valley, is published March 1st and it takes the walker into the woodland of Airedale around Leeds and Bradford. His work on the book has broadened his knowledge of trees extensively and he hopes in time that his knowledge of birds and wildlife will also expand. He says, “it opens up a new way of seeing a landscape,” despite being “not the most observant walker” – much of his attention is focused on identifying a pathway or landmark which he then transcribes to his maps. His recent explorations of the Aire Valley have revealed to him some areas he looks forward to returning to soon.

Beyond Yorkshire, he adores the “wild emptiness of the Scottish Highlands” – the magnificent, knife-edge ridge atop Liathach mountain is top of his ‘to be walked’ list - as well as the ever-changing coastline of Cornwall. His next project, which he is currently researching, will explore the Yorkshire coastline; the official coast path yet to be completed. It usually takes about two years to compile his books – the research, the walking, the mapping all takes time.

Chris lives in Hebden Bridge and it was his move to the town that inspired his book series. Having dismissed an earlier aspiration to become a travel writer, on moving to Calderdale he noticed how badly the OS maps of the area captured the local moorland. He abandoned attempts to navigate with OS Maps and instead began to create his own, which reignited the desire to write and publish, resulting in the publication of his first book, The West Yorkshire Moors. He still considers walking to be more of a hobby than a profession, most often accompanied by his trusty companion Alfie, the dog. He does also enjoy walking more leisurely routes with his partner and friends, but he is told even these walks contain “some element of work to them.”


Also by Caroline Spalding...
Review: Bright Burning Things By Lisa HardingReview: The Smash-up By Ali BenjaminAn Interview With Femi Kayode - Author Of LightseekersGirl In The Walls By A.J. Gnuse - A ReviewReview: The Children Of Ash And Elm - A History Of The Vikings By Neil Price
Walking, he says, “is a way to feel alive. There is always something different to see, hear, smell or think…it’s a way to connect to the local landscape and wildlife, both as it is and as it has been through history.” This has been pertinent during the lockdowns of the past year, he too has found comfort in walking, and he hopes that his books will continue to inspire people to discover more of the pathways on their doorsteps.

When not walking or mapmaking, Chris is a keen fellrunner and member of Todmorden Harriers. In ‘usual times’ he plays host and DJ on a regular night called Kismet at the Golden Lion in Todmorden, but whilst still in lockdown, he takes comfort from nights at home with his partner, Caroline, board games, craft beer and, of course, poring over maps.

The West Yorkshire Woods – Part 2, is published March 1st by Gritstone, an author-run publishing cooperative that specialises in publication of non-fiction and fiction titles relating to the landscape and the countryside.