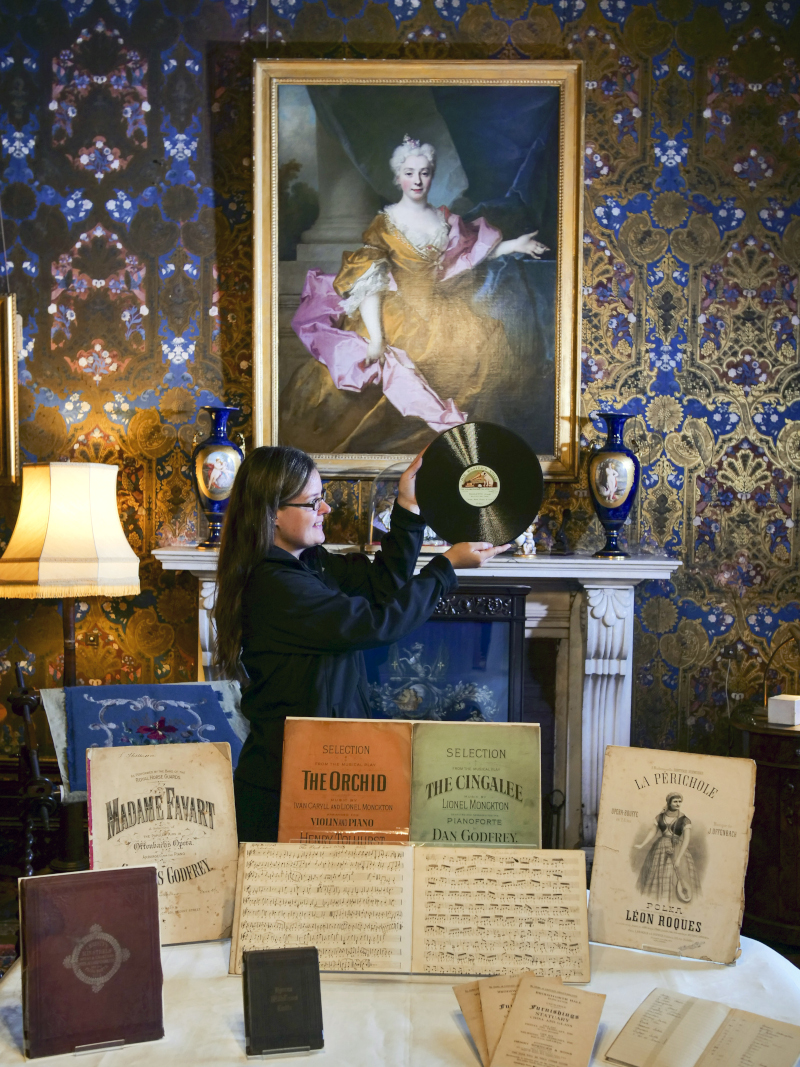 Curator Eleanor Matthews at Brodsworth Hall
For years the beautiful hall of Brodsworth near Doncaster was filled with sound. Music, song and dancing made the hall a lively place; gramophones boomed popular tunes and the local village brass band played at special family events. Years later with staff slowly leaving and the house falling into disrepair, it stood silent.

That has all recently changed and once again the hall is filled with the sound of music with a recently launched exhibition. ‘Music at Brodsworth: Storytelling through sound’ is an innovative soundscape and exhibition focussing on the Thellusson family’s love of music. From the recreated music of the late 19th and 20th centuries to lost instruments, photographs, sheet music and exercise books, visitors will be able to wander through the house, encountering sound in different rooms and immersing themselves in the harmonies of family, staff and visitors of that era. Through the objects and sounds relating to melodies it paints a picture of the family gatherings and shows how music was at the very heart of this grand old Yorkshire home. The new musical soundscape will bring Brodsworth to life, sharing what the family enjoyed playing, listening, and dancing to.

Eleanor Matthews, curator of collections at English Heritage which looks after Brodsworth Hall commented: “We’re bringing back the spirit of the house! A visit to Brodsworth this summer will not be silent, there will be no hushed voices or tiptoeing across carpets – the house will be musical, noisy, and lyrical. Visitors will meander from room to room and encounter a different sound, a different atmosphere, and a different feeling. Visiting Brodsworth this summer will be a chance to hear stories told through sound. You might overhear a reluctant child learning the piano, a confidant harmonium player practising for sheer joy, or a military music man fondly remembering his time in the British Army. Who is playing? Why are they playing? Where has the music gone?”

Conducting the research for this project has brought about some interesting finds. A large, framed photograph of the Woodlands Village Brass Band which was given to Charles and Constance Thellusson on their silver wedding anniversary in September 1910 has left the staff asking questions as to who the men in the picture may be. The band was established in 1909 and the family were heavily involved in the early history and development of the band, purchasing a full set of instruments for the group. Most of the band members would have worked at the nearby Brodsworth Colliery, leased by Charles Thellusson, with the band adopting a pick and shovel badge reflecting the occupation of many of its members. The band had some successes in its earliest days winning prizes at Crystal Palace and the British Open. It disbanded and reformed twice in its history before finally ending in the late 1980s.