When New Order frontman Bernard Sumner informs the Piece Hall audience in Halifax that “we’ve got a lot of catching up to do” at the start of their two hour set, he wasn’t joking.


Bernard Sumner
Covid restrictions aside, it has been way too long since the Mancunian’s travelled over the Pennines to play a concert in Yorkshire.

From the ashes of Joy Division, New Order were one of the most influential bands of the early eighties. Their song Blue Monday went on to become the biggest selling 12 inch single of all time and pioneered dance music in the early 80’s.

If you are going to make a live return then there surely cannot be more impressive outdoor venues than the Piece Hall in Halifax. With a New Order show though it is not just about the music as the lasers and light show are nearly as impressive as the songs the Yorkshire audience heard.

As the laser beams bounced off the colonnades and roof of the Piece Hall the bass, which is so paramount to the their music, reverberated in unison as the fans put on their best dancing shoes.

With Regret opening up a momentous set, it felt like the band had never been away. The impressive light show was also complemented by a video backdrop behind the band which added to the arty and visual approach that is tended to be associated with New Order.

Your Silent Face was an early highlight as the Kraftwerk inspired track is warmly welcomed by the fans. 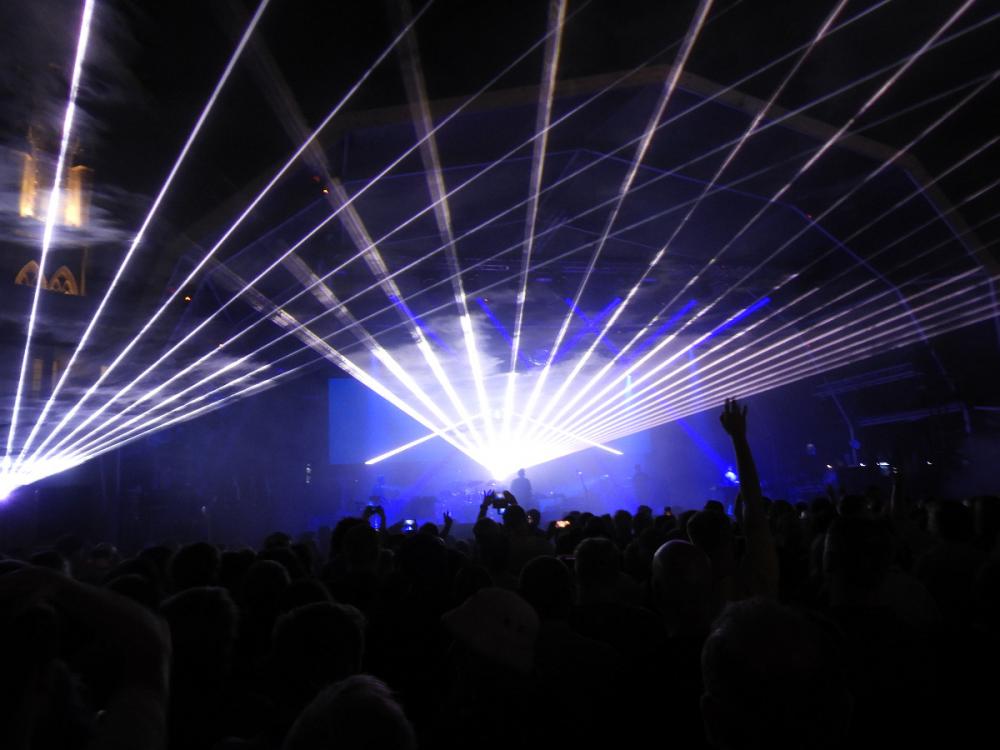 There is always the threat that groups can become heritage acts if they do not come up with new material. Thankfully Be A Rebel - their first new track in years received its first live airing during the show. Containing all the classic elements that constitute a New Order track perhaps we will not have to wait much longer for a new album.

True Faith kicks off the final part of the gig which moved up into top gear as the bass takes over on Blue Monday, which surprisingly appeared to be cut short from the original 12 inch version.

Saving the classic Joy Division songs for the encore was a masterpiece in presentation. The image of Ian Curtis, the group's lead singer who committed suicide when aged only 23 in 1980 is showed behind the band as Transmission and Love Will Tear Us Apart are played.

As the band depart the Halifax stage it had been a night of looking back with a nod to the future but nevertheless all done with class and finesse.
Also by Graham Clark...
Interviewing The VengaboysLet’s Rock Leeds! - The 80’s Music Festival Charms At Temple NewsamDuran Duran - No Ordinary World In ScarboroughAlbum Review: Metallica - The Black Album RemasteredTownhouse - A Breath Of Fresh Air For Halifax